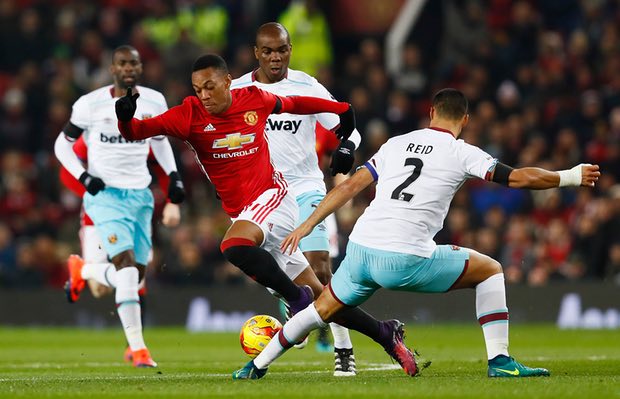 Manchester United cruised to victory against West Ham on Wednesday evening, booking their place in the next round of the EFL Cup, thanks to braces from Zlatan Ibrahimovic and Anthony Martial.

United learnt their lesson from conceding after 90 seconds to the Hammers on Sunday, by starting equally as quickly in Wednesday night’s clash. Some dainty footwork by Martial forced the ball to Henrikh Mkhitaryan, who back-heeled delicately to Ibrahimovic; and, the Swede finished calmly to record his fourth goal in as many games in all competitions.

However, there was an air of controversy surrounding Zlatan’s 10th goal of the season, as West Ham keeper Adrián caught the striker with a reckless studs-up challenge, and luckily escaped what would have been a deserved sending off.

Moments later, Ibrahimovic had the chance to double his tally for the evening, but Adrián stood tall and denied the 35-year-old twice in quick succession.

Despite their dominance, United were left ruing missed chances when former Red Devil Ashley Fletcher pounced on a David De Gea error to prod home and level the score in the 35th minute.

At times in the first-half, José Mourinho’s side looked like the United of old, yet the opening 45 told the tale of the Red Devils’ season so far: dominance with little reward.

But, it wasn’t long before United regained their lead, as Martial scored his side’s second of the game just after half-time. It was once again Mkhitaryan with the assist, as his low cross met the young Frenchman, who finished with style to the top left corner.

The France international was given an opportunity to double United’s lead a few minutes later when Wayne Rooney played him through on goal, yet his effort was straight at Adrián.

Although, it did not take long until he did exactly that. Antonio Valencia’s cross was met by the forward, who stroked the ball home for his fourth goal of the season.

Martial loves a goal against West Ham, as this was his fifth goal in five appearances against the London side.

Ibrahimovic went close to making it four for United late on, but his attempt from an acute angle was pushed aside by Adrián, who, on the night, saved West Ham from further embarrassment.

Five minutes from time, the Old Trafford faithful were given a sight they never thought they would see again. Bastian Schweinsteiger replaced Martial, making his first United appearance since March to rapturous applause from the home fans.

And, the German’s moment in the spotlight nearly got even better, as his effort from range flashed wide of Adrián’s post. You can only imagine the reaction inside Old Trafford if that one went in…

United added insult to injury with the last kick of the game, as Ander Herrera found Ibrahimovic, who tapped home his second of the game into a gaping goal.

Overall, it was a largely dominant performance by Mourinho’s men, giving them a fully deserved win over West Ham, after failing to beat them at the weekend. At times, United played some excellent football, and booked their place in the EFL Cup semi-finals with apparent ease.

United next face Everton on Sunday in the Premier League, yet a return to his old club for Rooney was ruled out tonight, due to him picking up his fifth booking of the season.