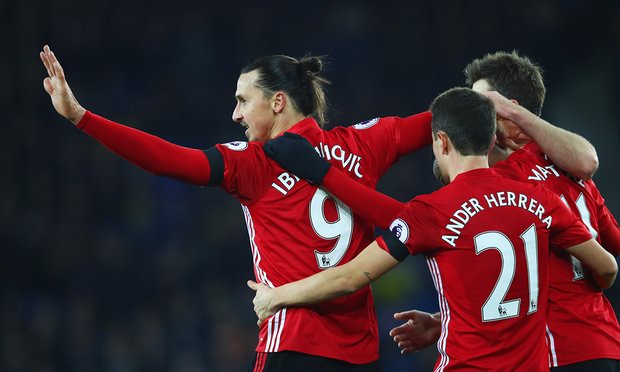 Manchester United’s trip to Goodison Park on Sunday ended in heartbreak, as Zlatan Ibrahimovic’s first-half goal was ruled out by a late Leighton Baines penalty.

In the 16th minute, Marcos Rojo was lucky not to see red after his double-footed lunge, yet United fans will argue that the referee gave decisions in Everton’s favour also, after Gareth Barry went without punishment for a late challenge on Ibrahimovic and a deliberate handball.

After a half of few chances, Ibrahimovic finally broke the deadlock in the 43rd minute. The Swede ran through on goal and chipped the ball over the onrushing Maarten Stekelenburg, and it bobbled in after hitting both the crossbar and the post.

His recent goal drought seems a distant memory now, as the 35-year-old has tallied six goals in his last five United appearances.

Early in the second-half, David De Gea was called into action, as he saved brilliantly down to his right after a stinging Kevin Mirallas strike.

Minutes later, Ander Herrera had a chance to double his side’s lead, but his volleyed effort clattered the crossbar, much to the delight of Stekelenburg.

Enner Valencia could have equalised for the home side in the 81st minute, but his tame header was straight at De Gea, who collected comfortably.

It was heartbreak for United late on, as Marouane Fellaini conceded a penalty moments after coming onto the pitch, which Leighton Baines converted to make it 1-1.

A cruel blow for the Red Devils, whose top four hopes are withering away, never mind their title hopes…

United now have to look towards an even tougher test in the league, as they are set to face Spurs in their next PL fixture.