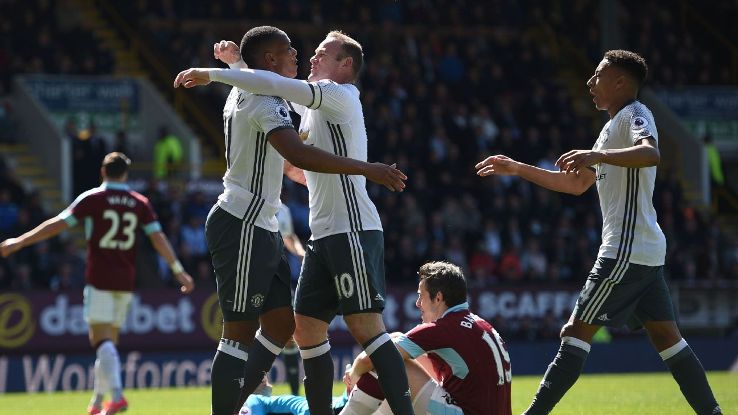 United’s first chance of the game fell to Rooney in the ninth minute, when Martial drilled a low cross across Burnley’s box, yet the 31-year-old’s resulting effort was straight at Tom Heaton.

Moments later, Ashley Young’s corner fell straight to the head of Marouane Fellaini, yet the Belgian’s header was easily claimed by the Burnley keeper.

José Mourinho’s men came close just before the 20-minute mark through Rooney once again, as a superb counter-attack spearheaded by Jesse Lingard found United’s all-time record goalscorer, yet his delicate lob over Heaton had just too much power on it.

The visitors opened the scoring in the 22nd minute, however, through none other than Martial. The Frenchman left Joey Barton for dead with an excellent turn of pace in the midfield, then laid the ball off to Ander Herrera. Herrera instantly returned the favour and picked out the onrushing Martial, before the forward finished with the type of confidence United have lacked at times this season.

This opener came at a price, though, as it was Martial’s 25th goal for the club, meaning an extra £8.5m will be paid to AS Monaco as part of the contract agreement signed when the 21-year-old moved to Old Trafford in 2015.

In the 39th minute, United doubled their lead as a result of a slice of fortune. Paul Pogba found Martial with an excellent pass after spinning his defender, yet the young striker’s effort was saved well by Heaton. Regardless of this, the ball fell to Rooney, who squeezed the ball home from a tight angle.

Late on in the first-half, Andre Gray reminded the Red Devils that the game was not over yet, though, as two chances in quick succession fell to him, yet the Burnley forward failed to make them count.

The second-half was all about seeing off the game to get all three points for the most part, as Mourinho’s players battled hard to keep Burnley out.

Eric Bailly was a rock at the back, and the home side failed to find a way through for most of the closing 45 minutes. Paul Pogba controlled the midfield for the majority of the game, the type of commanding performance that United fans expect to see from him on a consistent basis.

United themselves failed to create any clear cut chances to extend their lead, with Pogba’s effort from range being easily dealt with by Heaton, and Marcus Rashford’s one-on-one being clawed away by the Burnley shot-stopper.

Pogba and Martial in particular were fantastic for United today, as they put pressure on their top four rivals, especially Manchester City, who we will play on Thursday evening at the Etihad Stadium.

All in all, it was a successful away day for United, with some encouraging individual performances. At this stage of the season, every point is vital in the hunt for Champions League football, and it is safe to say it was job well done at Turf Moor.