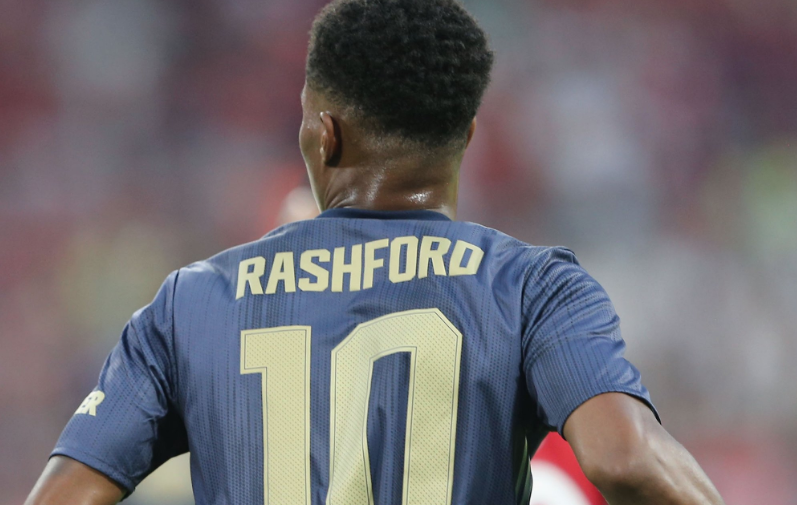 Manchester United lost to Bayern Munich in a friendly that was devoid of many storylines, or much excitement. However, there was one big talking point that caught the attention of many fans of the club. Marcus Rashford wore the number 10 jersey for the first time, and Man Utd later confirmed on Twitter that the number change is a permanent one.

The history of the number 10 kit at Manchester United is a storied one. Although the number isn’t as fabled as the 7 jersey, there have still been plenty of legends who have worn the 10 across their back for United. The most famous example has to be Wayne Rooney, who had the number for a full decade, and led the club to plenty of glory during his time, while also breaking the clubs goalscoring record. Legendary Dutch striker Ruud Van Nistelrooy wore the kit throughout his United tenure, and went on to win the Golden Boot, as well as the Premier League and FA Cup. Teddy Sheringham also wore the 10 kit for United, and had the number on his back when he scored the tying goal in the 1999 Champions League Final. Some players, like Zlatan Ibrahimovic, David Beckham, and Roy Keane also had the kit at one point during the course of their United careers, if only for a single season.

There is going to be a lot of pressure now put on Rashford, but it seems the player is more than ready for it. Throughout his short career, he has been able to prove critics wrong time and time again. Coming up through the academy, the Mancunian has already done so much in such little time. He has grabbed the winner in a Manchester Derby, while also scoring a brace to defeat Liverpool at Old Trafford. Rashford has scored in every competition he’s competed in, and even has a number of goals for England at the international level already. Rashford has thrived under pressure in the past, and looks ready to handle the responsibilities that come with the number.

When looking at it, Rashford was the best candidate to take the vacant number. There will some ramblings that Alexis Sanchez might’ve made the switch earlier in the offseason, but he still out to prove he’s deserving of the more famous number 7 kit. Paul Pogba was another possible candidate, but it seems the Frenchman is happy with the number 6, as he’s worn that throughout his career for both club and country. Some fans thought the number would be reserved for a big name summer signing, but it seems less and less likely that someone worthy of the number will come in before the start of the season. Marcus Rashford is a Mancunian who has come up through the United academy, and is more than deserving of the number.

Now, with the number 10 on his back, there’s a good chance Rashford is set for a big season ahead. He’s a player that does best when confident, and being given the number shows the club has full faith and belief in him. He might not have gotten as much gametime as he would’ve liked last year, as he was unable to cement a full time starting spot in the United starting XI. He still did well all things considered, grabbing 13 goals from a wide position in all competitions.

Things could be much different this time round, especially if Man Utd are unable to bring in another attacker before the transfer window closes. Rashford is set to start the year as the clubs starting right winger, and could thrive under an improved Man U attack. Alexis Sanchez and Romelu Lukaku will have adapted in their second seasons with the club, while the signing of Fred will allow Paul Pogba the ability to create more up the pitch. With the focus of opposition defenders on those players, Rashford will have plenty of space to run in behind with his blistering pace, and convert any chances that come his way.

Marcus Rashford is the new number 10 for Manchester United, and is ready to etch his name in the clubs history books.