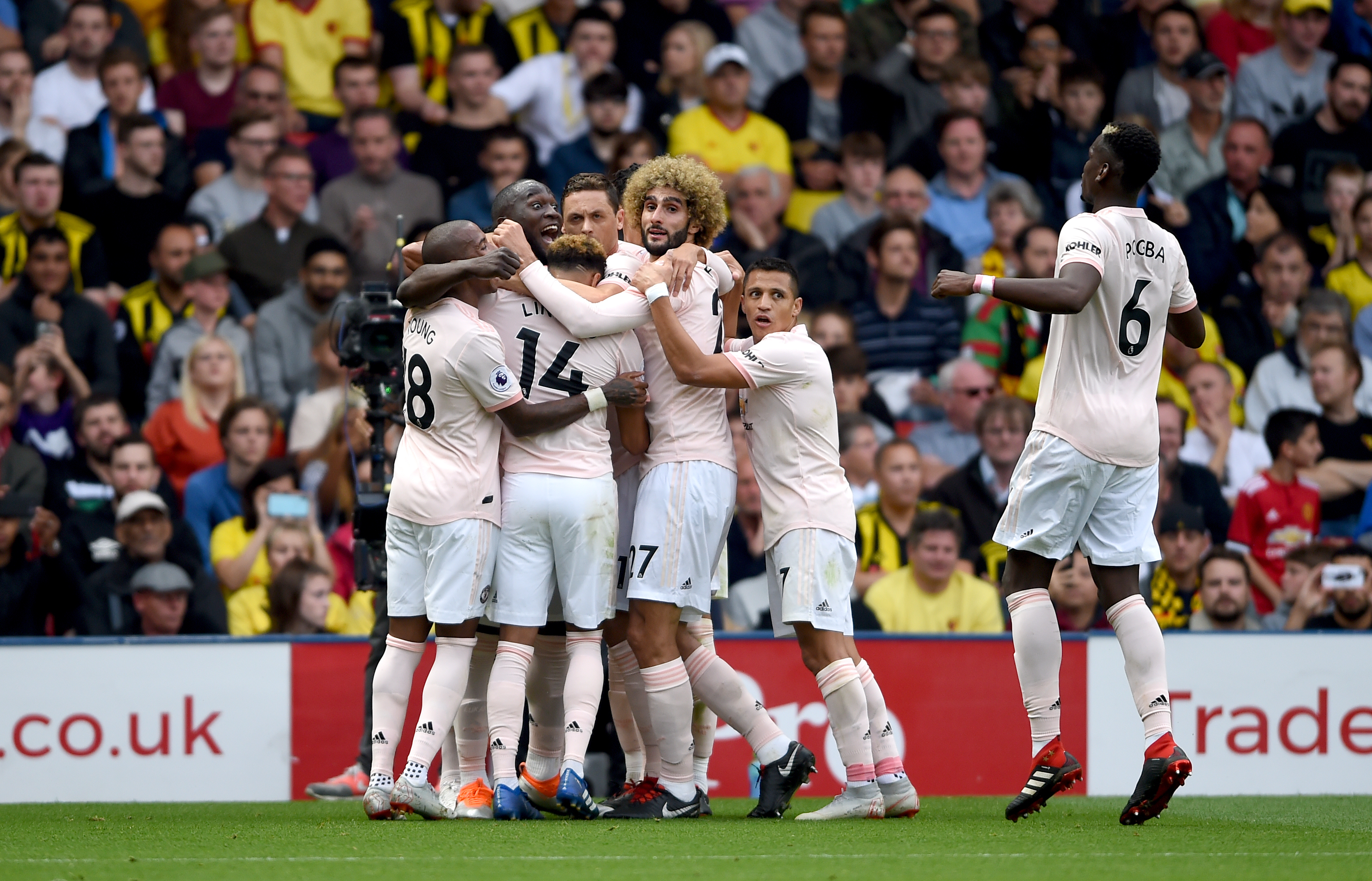 Manchester United have picked up a second straight away victory in the league, beating Watford 2-1 at Vicarage Road. It was a superb first half for the Red Devils, who were up by two thanks to goals from Lukaku and Smalling. Watford responded well, and grabbed one back after Gray scored, but couldn’t find a late equalizer.

Mourinho only made one change to the team that beat Burnley, and it was a forced one at that. Luke Shaw wasn’t able to practice during the week due to sustaining a concussion against Spain during the international break, so Ashley Young made his return to the team to slot in at left back.

United had a half chance very early on, when Young lumped it a cross into the path of Lukaku. He did a decent job to bring it down, but the Watford keeper did even better to come out and deal with the danger.

The away side stayed on the front foot, and started to really control the pace of play. Pogba found some space on the edge of the area, and ripped off a long shot, but hit his effort right at the keeper.

Watford had their first chance, and would’ve taken the lead if anyone other than David Dea Gea was in goal. It was a dumb mistake from Fellaini, who tried dribbling the ball in the United penalty area. He was dispossessed by Deeney, who smashed a shot. De Gea was up the challenge, and reacted quickly to get a hand up and tip the ball over the bar.

United thought they had taken the lead soon after. A diagonal cross from Matic picked out Alexis in the middle of the penalty area. The Chilean settled the pass, turned, and slotted home, but was correctly called offside by the linesman.

It would be Sanchez once again creating danger, as he picked up the ball and dribbled all the way from the left wing to the right. He went to smash a shot into the roof of the net, but Foster got his hands up in time to make the save.

Man U were finally able to break the deadlock, with Lukaku opening up the scoring. A second ball was whipped in after a corner by Young. It somehow missed everyone in the area except Lukaku, who was able to get a crucial touch with his stomach, and redirect it into the back of the net.

The away side went right back at it, creating another chance soon after on the counter. Pogba was set up for a long shot, and hit it well, but could only force another good save from the Watford keeper.

It would be two in only a few minutes, with Chris Smalling somehow scoring a potential goal of the season contender. A corner was headed back across goal by Fellaini. Smalling brought down the high ball like he was Zlatan, before turning and absolutely smashed a shot past Foster. It was one of those goals you tell your children about.

United created one last chance right before the half. It was a brilliant ball to the back post by Lingard to pick out Pogba, who caught it nicely on the volley. Once again, however, Foster made himself big to make yet another crucial save.

The referee blew for halftime, bring a near perfect opening 45 for United to an end. The only possible concern was that it could’ve been much more, with the Red Devils having a handful of chances to further extend the lead.

Watford had their biggest chance of halving the deficit at the hour mark. A corner was whipped in with pace into the area, but Smalling was just about able to head it away from danger.

The home side were able to find a goal soon after, with Gray grabbing one back for Watford. A cutback from the left hand side picked out the forward on the edge of the area, and his finished was calm and composed, placing it into the far corner of the net.

Watford begun to heap on the pressure, and Mourinho responded by making his first sub of the match, bringing in Martial for Lingard.

United were put under a lot of pressure, and were bailed out when Doucoure blasted a long shot well over the ball.

The Red Devils came close to snatching one on the break, when Valencia played a long ball to Lukaku, who teed up Sanchez. However, Cathcart was able to make a last ditch challenge and clear the ball out.

The second United sub of the contest came roughly ten minutes from full time, with McTominay coming on for Sanchez to provide some extra defensive solidity.

Nemanja Matic was sent off for a second yellow card, putting a stop to a Watford attack with a late challenge.

Watford thought they had grabbed an equalizer in the final minute, but David De Gea had to remind everyone why he’s the greatest goalkeeper on the planet. A long cross was lumped into the area, and Kabasele won the header, but his effort was palmed away by the Spanish keeper. Watford had one last corner, but it flew over everyone’s head.

It might’ve been a fight to the very end, but United were able to pick up a crucial victory on the road against a tough Watford side.

Manchester United’s next match is on Wednesday, as the Red Devils travel to Switzerland to take on Young Boys in the Champions League.