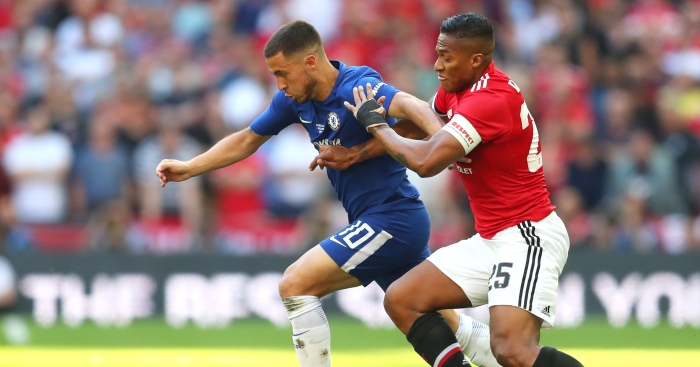 The international break has been and gone meaning Premier League football is back, but for United a trip Chelsea is not the nicest return to action- especially in these circumstances.

While host manager Maurizio Sarri is beloved already at his new Stamford Bridge home, José Mourinho returns to visit his old stomping ground for what could be the final time.

It is real a battle of footballing “fire and ice” in the early match this Saturday afternoon.

One to watch: Jorginho

‘Sarriball’ (a high octane style) has revitalised Chelsea this season and galvanised the squad earlier than even Sarri himself expected, leading them (so far) to top of the table.

Operating in a 4-3-3 (turning into the old-school W-W shape when in attack) Chelsea move the opposition out of shape with quick passing and fluid movement in the final third.

That style of play has proved dividends with usual left winger Hazard drifting into a free role and picking up 7 goals and 3 assists in just 8 outings.

Besides their star man, their midfield trio has been superb thus far; consisting of Jorginho (a modern regista, keeping this ticking over), N’Golo Kanté (given more responsibility on the ball under Sarri) and either Ross Barkley or Matteo Kovačić (two rejuvenated midfielders) playing slightly more advanced.

It is also crucial that while Cesar Azpilicueta is steady at right back, the marauding Marcos Alonso bounds up the left flank and can deliver crosses into the penalty area of Oliver Giroud – who may not have scored this season but has chipped in with 4 assists.

Finally, centre backs David Luis and Antonio Rüdiger are comfortable on the ball and are given license to try speculative runs or passes due to the impressive Kepa Arrizabalaga’s arrival between the sticks offering a calming presence.

From the bench, the likes of Pedro or Willian (depending on who starts) and Álvaro Morata can offer different skill sets if United are holding firm.

Luke Shaw was rewarded with a new five-year contract extension on Thursday due to his outstanding displays this season and renaissance following a dark period under Mourinho in recent years.

The injury list is piling up with some key absentees set to miss out on this one.

Speculation is still persisting of Mourinho possibly losing his job soon and this match begins a nightmare run of six tricky fixtures.

Ashley Young is expected to play at right back again with Antonio Valencia suspiciously out of favour.

Rumours of Phil Jones not travelling with the squad on Friday evening surfaced so Victor Lindelöf looks set to start alongside Chris Smalling with Eric Bailly reportedly done and dusted with Mourinho.

Maroune Fellaini will almost definitely anchor the side behind Paul Pogba in midfield with either Ander Herrera, Andreas Pereira and Fred too – Herrera famously man-marked Hazard at Old Trafford and could have a similar role this time out.

Romelu Lukaku netted twice in his one appearance on international duty with Belgium however a trio of Anthony Martial, Marcus Rashford and Alexis Sánchez may start up front.