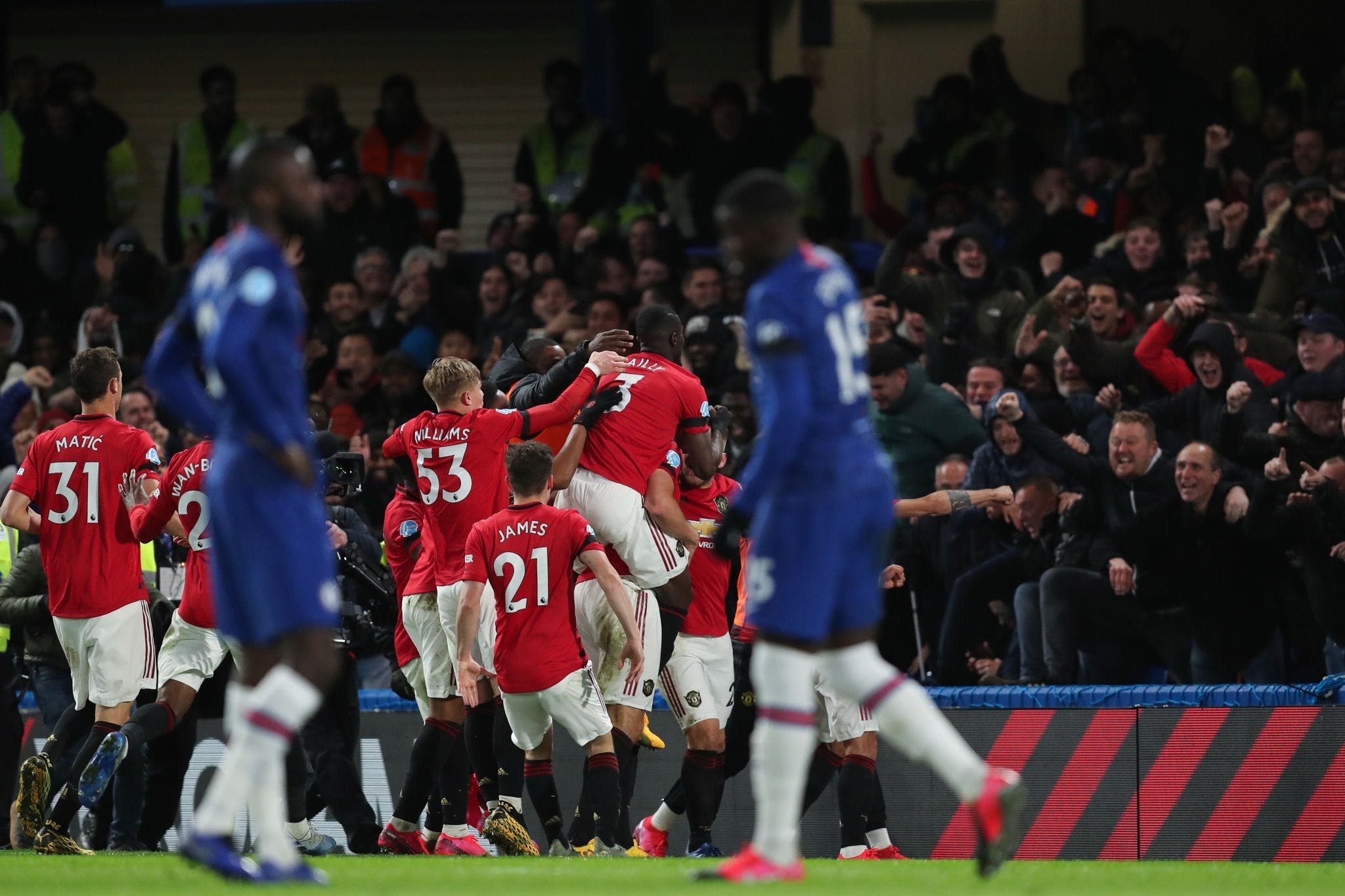 Manchester united have moved up to 7th place but more importantly have moved 3 points off the top 4 after a resounding 2-0 victory against Chelsea at Stamford Bridge. After beating the blues for the 3rd time this season, and the second time away from home, there are plenty of positives for Ole Gunnar Solskjaer and his squad who are striving for champions league qualification this season.

The first half was shaky, and by no means a solid performance from Ole’s team, making several loose passes and looking very unconfident on the ball for the first 15 minutes. Reece James had the first real attempt on goal as Chelsea looked to be dominating the game in the first period of the half.

Kante went down injured on the 10th minutes however, and things looked to change slightly for the Reds, as the midfield battle became slightly easier as Mount came on for the injured Frenchman.

The biggest talking point of the first half was most definitely the Maguire and Batshuayi confrontation that led to calls for a Maguire red card that was denied by VAR. The pundits at half time all agreed that Maguire should have been sent off, yet Anthony Taylor and the video assistant referees disagreed, leaving Maguire on the pitch who went on to put in a stellar performance at the back, going on to win man of the match.

Up until the eve of half time, Chelsea were once again on top, with Batshuayi coming close at the digression of Bailly’s awful positioning on his return to first team football and the Willian dive on the 35th minute that led to calls for a penalty from the Stamford Bridge faithful. However, Anthony Martial met a wonderful Cross from Aaron Wan-Bissaka in the 45th minute and headed home the first an only goal of the first half and sent Manchester United into the dressing room on top of the game.

The second half saw greater intensity from Chelsea, with them building up pressure on the back five of Manchester united with a Pedro chance arising in the 54th minute that United managed to deal with. One the turn of the hour, Zouma seemed to have equalised from a corner. However, VAR overturned the goal due to a foul on Brandon Williams. A dubious decision that most definitely benefitted the Reds, yet it is without question a unconvincing decision that denied the opportunity for Lampard’s men to draw level.

Five minutes later, Harry Maguire netted his first premier league goal for United, having met Bruno Fernandes’ wonderful corner who as a result registered his first assist for his new club. Up 2-0 away from home, Manchester united looked in control and brought the feistiness to Chelsea, with the game taking somewhat of a sour turn with Chelsea’s growing frustrations evident.

The later portion of the game saw the Reds deal with wave after wave of Chelsea chances. Bailly made a crucial tackle to deny a clear goal scoring chance for Mateo Kovačić in the 73rd minute. This was followed by another disallowed goal from substitute Olivier Giroud, however this one was undoubtedly the correct overruling from VAR, with Giroud being marginally offside, leaving United still two goals to the good. The final big chance of the game for Chelsea came from Mason Mount who struck the post from a wonderful freekick from an awkward angle that left David De Gea down injured. He soon recovered however and was able to remain in goal to see out the victory for Manchester United.

New signing Odion Ighalo made a cameo appearance and looked sharp and strong for the little minutes he was on the pitch. While he did miss a glorious chance to make it 3-0, it did not impact the result and Ighalo should look forward to making more appearances for his boyhood club in the coming weeks.

Overall, it was a clinical performance from United who capitalised from the chances that fell to them, unlike Chelsea who did the opposite. It seems that the Solskjaer has Lampard’s number, making it three wins out of three and being the only consistency for him and his players this season. Hopefully this game reaffirms the idea that Ole is a big game manager, beating a top 6 side again this season. Consistency is key however, and if Manchester United can stay consistent they should not have an issue grasping one of the illustrious champions league places up for grabs after Manchester City’s apparent ban from the competition. Overall it was a good evening for Ole and his boys, who play club Brugge on Thursday night and Watford in the league on Sunday.