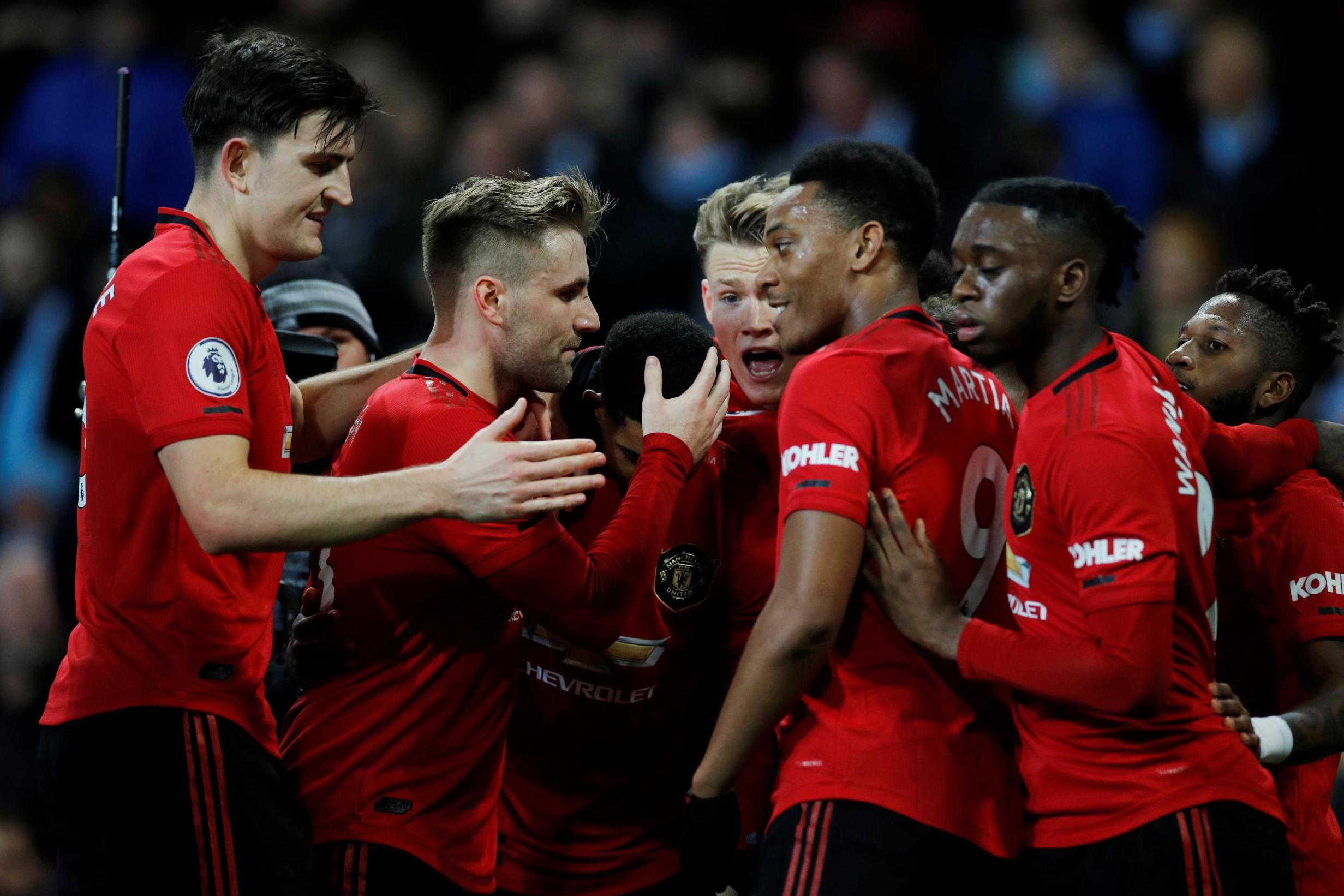 Having dealt with Derby County, a derby in county of Greater Manchester is in store this Sunday at Old Trafford.

Ole Gunnar Solskjær and Pep Guardiola both lead their sides to FA Cup quarter-final ties in midweek but now have relative Premier League success on their minds.

With mixed results in their three previous meetings this season, it’s all to play for tomorrow.

Following a third successive Carabao Cup win last weekend against Aston Villa, City are once again on the march towards silverware in cup competitions.

On Wednesday, Agüero’s strike at Hillsborough was enough to advance to the FA Cup quarter-final and travel to Newcastle in a fortnights time.

Guardiola boasts the last six domestic trophies available in English football, but that won’t take much away from the disappointment of being so far behind Liverpool in the all-but over title race.

Last midweek, it was a far more impressive result as the Citizens came from a goal behind to beat Real Madrid 1-2 at the Santiago Bernabèu in their Champions League round-of-16 first leg.

Having already won 3-1 at Old Trafford in the league cup semi-final, Guardiola’s men will have confidence going into this derby.

That game was hardly a contest; three goals in 22 minutes blitzed United as City’s lack of a central focal point and emphasis on controlling the midfield bamboozled the Red Devils.

However, having lost both the second leg and reverse Premier League fixture at the Etihad Stadium, City will surely be wary of another defeat.

Kevin De Bruyne was a key part of the strategy but faces a late fitness test after injuring his shoulder in last week’s cup final at Wembley.

Stockport’s own Phil Foden started in that match but not in midweek, so could be the replacement.

Solskjær said: “It wasn’t an issue until our heads went for a little while, so we’ve got to control our emotions more. And we have, we have learned, so that’s an experience we’ll bring into this game definitely.”

One statistic going for Guardiola is that the away side has won six of the last seven Manchester Derbies in all competitions, with the exception a 3-1 home win for his side in November 2018.

“Always I believe that United are strong and playing good. Always I have great respect and a good opinion of them. The players follow him [Solskjær], the commitment they show. They are getting better; this is their best moment of the season.” – Pep Guardiola

Dispatching Derby wasn’t quite light work for Solskjær’s side but 0-3 was certainly a sure win.

A seventh clean sheet nine games was substantially thanks to Sergio Romero‘s super save from a late Wayne Rooney free-kick, following a goal from Luke Shaw (or Jesse Lingard) and a brace from Odion Ighalo.

A fantastic Premier League February, in which United conceded no goals and scored five in two wins and one draw, has lead to Solskjær and Bruno Fernandes to be nominated for respective awards of the month.

Mason Greenwood and Anthony Martial are also nominated for Goal of the Month for their individual efforts against Watford.

Since the 0-2 defeat by Burnley January 22, the Red Devils have shipped just two goals in all completions while scoring 22 goals during those following nine.

The second of the outings included the second leg win in the Carabao Cup, which wasn’t enough to make it to Wembley, but was a sign of encouragement and helped kickstart the unbeaten run.

Despite an uncharacteristic error last weekend, David De Gea is set to replace Romero between the sticks.

Brandon Williams impressed in both wins at the Etihad – once at wing-back. Solskjær could again opt for a three-man back line to prevent space from being exploited.

Aaron Wan-Bissaka could return after missing Thursday’s match with a knock from training. Daniel James and Harry Maguire are expected to remain out having not been with the squad tonight.

Jesse Lingard was subject to abuse getting on the team bus after the FA Cup win and was also not spotted entering The Lowry hotel this evening.

Martial made a brief appearances towards the end of the game and could partner Ighalo if Greenwood or another forward isn’t selected.

Although it hasn’t hindered United yet, the boss bemoaned the Pride Park trip being on a Thursday, giving City an extra day of rest ahead of this clash.

“When you’re at home and you have to open up against a team like Man City, they will exploit that if you’re not 100%. Sometimes being at home with your fans, you want to show them what you can do and beat your opponent, and sometimes you open too many spaces.” – Ole Gunnar Solskjær