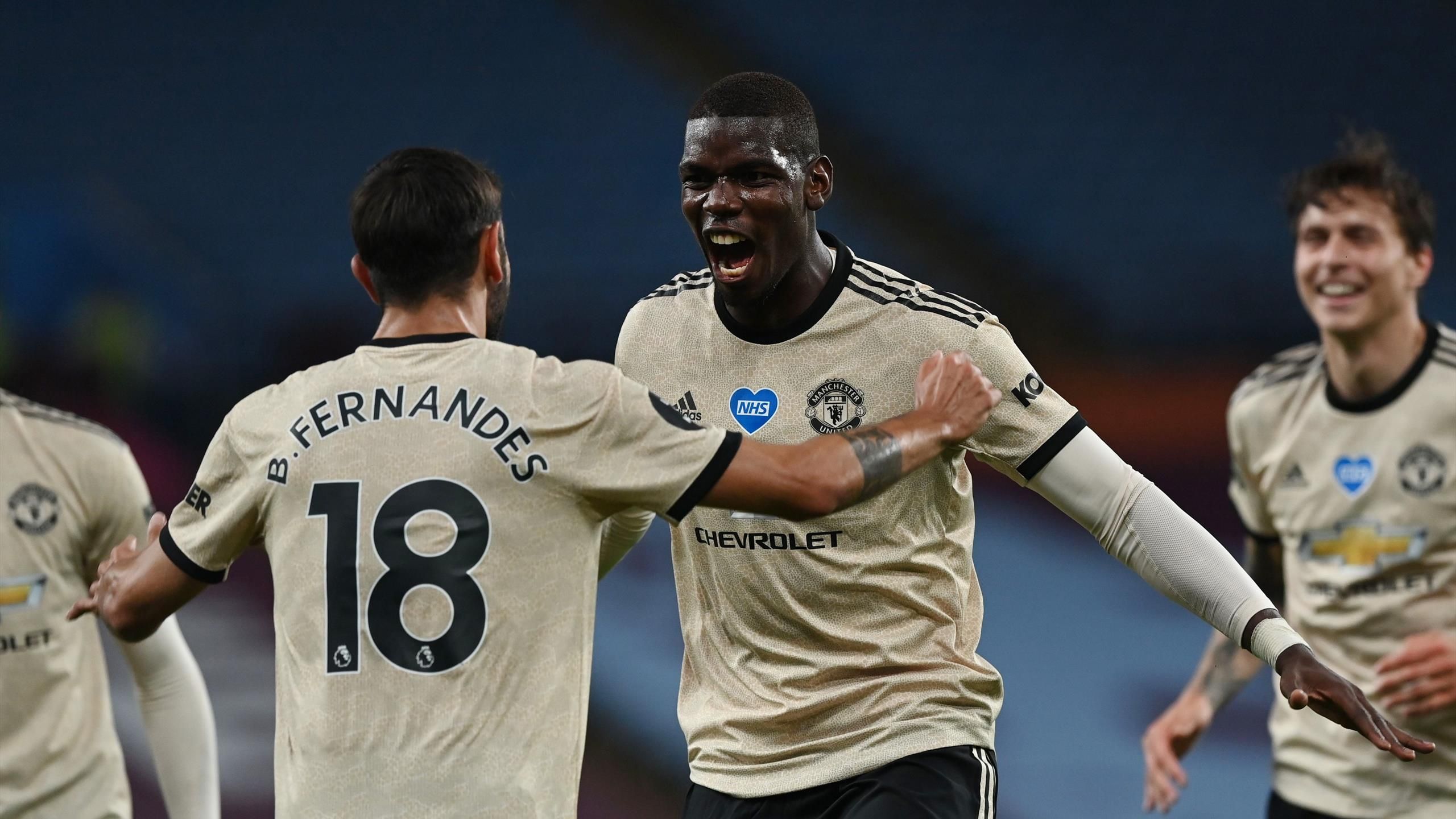 Manchester United became the first team in premier league history to win four consecutive games by a margin of three goals or more last night as they swept aside Aston Villa at Villa Park. Goals from Fernandes, Greenwood and Pogba were enough to see the Reds take home all three points and move within one point of Leicester City in the race for champions league football. Here are five things that we learnt from the victory –

Teams aren’t sure how to deal with Greenwood

Gary Neville gave Greenwood the man of the match award on Sky and it’s clear to see why. The 18-year-old was in fine form once again and found the back of the net with a thunderbolt of a finish with this supposed ‘weaker’ foot from the outside of the area. One thing that stood out to me about Greenwood’s performance last night was the fact that the Aston Villa defence looked like they didn’t know how to play him. The academy graduate loves receiving the ball on the half turn in the sort of spaces that you’d expect a number 10 to operate in and found himself in these situations frequently throughout the first half.

The Villa back line didn’t know whether to stick or twist. If they stayed tight to him, he would shrug them off and get around them, and if they dropped off him then he’d either drive into the box or get a shot on goal. Tyrone Mings opted for the latter approach and came under scathing criticism from Roy Keane at half time, but the truth is if Mings had moved tighter to Greenwood then he probably would have dribbled past him and found the back of the net anyway. Greenwood will eventually become a centre forward, but for now he’s performing incredibly on the right wing.

Pogba loves Bruno as much as we do

It’s been clear to see how happy Paul Pogba has been since returning from injury and that happiness has resulted in consistent, high level performances from the world cup winner. Last night was no different, with Pogba putting in the complete midfield performance, covering every blade of grass as seen by his touchmap (WhoScored).

Yesterday, he was quoted as saying that “you realise when you’re out for a long time how much you really enjoy playing football and how much you love it. So obviously I’m really, really happy and so blessed to be back and be fully fit now, and I’m enjoying being back with the team.”

What became evident in this game was how big a part Bruno Fernandes has played in Pogba’s happiness. In the 58th minute, Bruno found Pogba on the edge of the box from a corner before the Frenchman curled the ball past Pepe Reina – and his celebration spoke volumes. He ran straight over to the beaming Fernandes before they embraced each other with a celebratory hug. A better love story than Twilight. All we need now is a picture of Pogba with a new Manchester United contract.

We can win in second gear

Although United ran out comfortable winners on the night, this was far from a flamboyant performance. Fernandes wasn’t at his fluent best, yet still chipped in with a goal and an assist – as well as winning the penalty for his goal, Matic was sluggish and Martial struggled to get into the game at times. The pleasing thing was the fact that we still managed to win comfortably despite the drop in performance level.

With the attacking players that United have at their disposal it only takes one moment in a game for things to come together and to score a goal and that’s exactly what happened in a period of the game where Aston Villa were actually on top. It’s a cliché as old as time but all the best teams do win when they’re not at their best.

Jack Grealish needs to move on

Defensively passive, toothless up front, and quick to give up when things don’t go well, Aston Villa are doomed, and I’ll be amazed if they don’t go down this season. Jack Grealish, so bogged down by his responsibility to do absolutely everything for Villa, looks knackered and fed up. Looking at his touch map (WhoScored) from last night you can see that he’s having to drift right and left and far too deep to pick up the ball which means he’s rarely getting the opportunity to cause any offensive damage in the final third of the pitch.

It’s no wonder that he gets fouled so often as none of his teammates ever seem to give him an option of a pass. With willing runners in front of him and competent midfielders behind him, Grealish could be a genuine star. To do that he needs to leave his boyhood club this summer, whether they stay up or not, and head to a top six club. I’d personally love him at United but that remains to be seen.

With 20 goals to his name already this season, United’s number 9 is still desperate for more. After hitting the bar with a left footed effort midway through the second half, Martial was substituted off for Odion Ighalo with ten minutes to play and the Frenchman was far from impressed. He trudged off the pitch in a sulk, something that his manager will be delighted about. Solskjaer has often spoke about wanting his forwards to be obsessed with scoring goals and Martial certainly seems to have developed that sort of mentality.

The moment reminded me of a Darren Fletcher quote on Ruud van Nistelrooy:

“We’d win a game 4-0 but if he hadn’t scored, he would come into the dressing room and throw his boots against the wall, he’d be slapping his boots down, he’d be absolutely raging! Everyone else was like, ‘we’ve just won 4-0’, but for him he was that ruthless as a goal scorer he just wanted to score in every game. It didn’t matter if we won 5-0, 4-0, 3-0 – if he hadn’t scored, he’d be absolutely raging.”