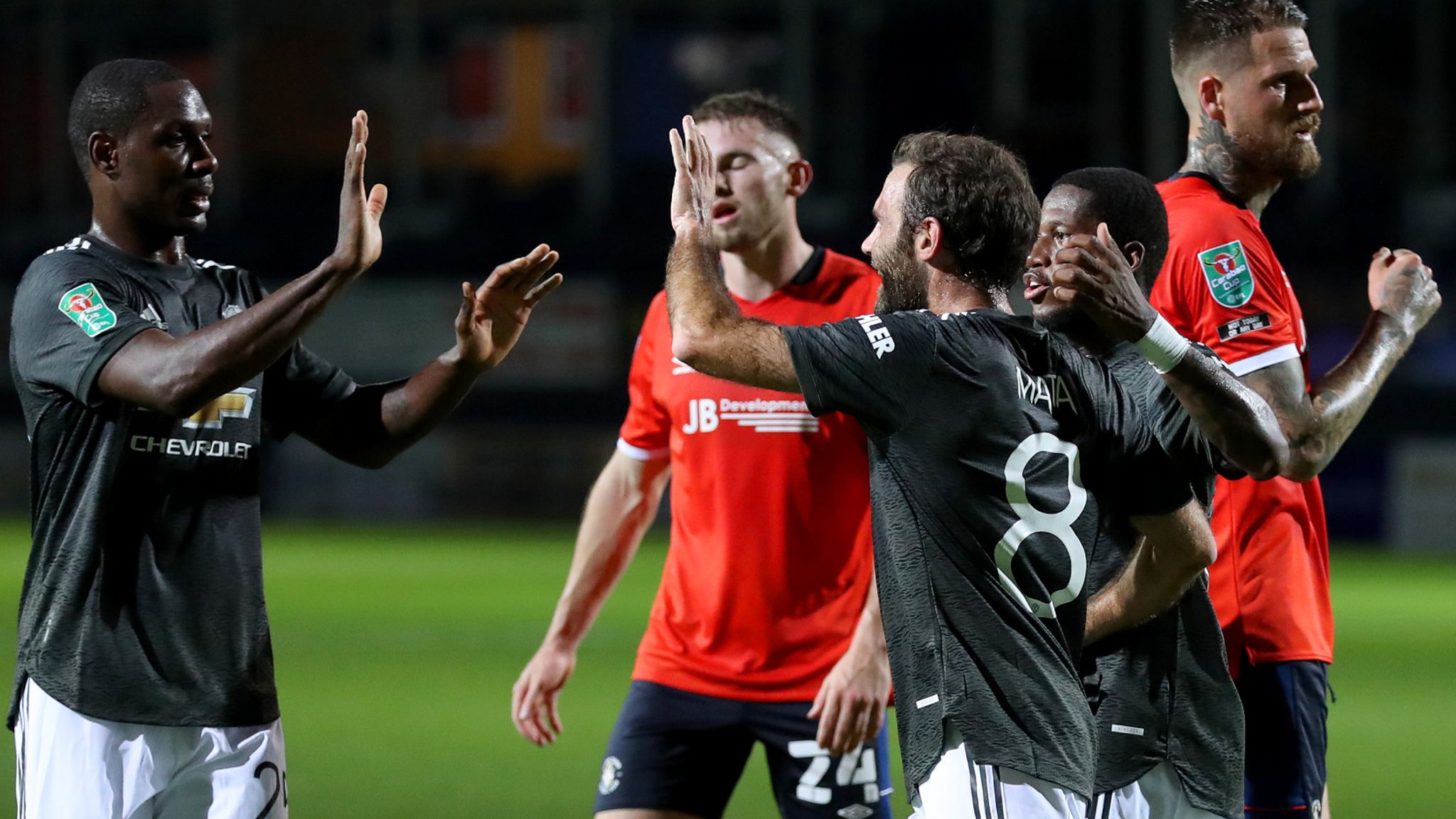 Tonight’s match was United’s opening fixture in the EFL Carabao Cup – another competition they reached the semi-finals in last season. They, of course, fielded a rotated side but there where notable starts several, including Nemanja Matic, Aaron Wan-Bissaka, new boy Donny van de Beek and Dean Henderson, who made his first senior appearance for the club.

The first chance came just a few minutes in, when Juan Mata tested the keeper from far out and nearly snook it in the near post. This didn’t shake Luton though, as a few moments later, a fast-paced ball fizzed across the United box and Williams had to be alert to hoof it clear.

Just before the ten-minute mark, Maguire tried to recreate that long-range screamer against Tranmere that earned him his first goal for the club, but the power on this one saw it swizzle way wide of the net. The United captain looks set to play every minute physically possible again this season.

The game had a decent tempo coming from both sides and even within the first quarter of an hour, you could see what van de Beek can bring to the midfield this season, as he found himself in the box and indirectly set up Mata for his second chance, thanks to a clever leave from the Dutchman.

The first real sign of worry followed immediately after though, as Luton’s Danny Hylton found himself driving down the left-flank and thrashed the side-netting. In truth, Henderson had it covered and the number nine probably should have put it across the box, but the Red’s high-line was starting to be tested.

Most patterns of play were as you would expect against a lower-league team like Luton: patient build-up moving from side to side while the likes of Lingard, Mata and van de Beek tried to find space. The occasional player found space in behind, but to no end for most of the first half.

As for Luton, their low-block was doing its job for the most part and they were still managing to pose a threat on the counter, with former United man, Ryan Tunnicliffe – who really looked to be enjoying playing against his former club – nearly carved out another half-chance as the Reds looked slightly unawares.

After about 25 minutes or so, Luton looked to have really settled into the game and were certainly not shrinking in the shadow of Premier League opposition. The ball remained in United’s half for a large period and not only did they win a succession of corners, but they boasted as much as 70% possession at one point. Balls into the box, as always, looked to be the main worry for the defence.

One big positive was Jesse Lingard’s enthusiastic performance. While not all of his passing came off, his movement looked to be closer to its usual standard; Mata dictated most of the play, but his link-up with van de Beek looked promising and was key in the select chances created.

The first half was by no means exhilarating and United still looked to be lacking fluidity. However, a moment of excitement did eventually come in the 44th minute, when Brandon Williams was brought down in the box. Juan Mata calmly stepped up to take the penalty and tucked it comfortably into the bottom right corner. 1-0 United.

While United were by no means poor, it the first 45 wasn’t as penetrative as you would have hoped and Luton would have rightfully felt hard done by. The goal should have been the spark needed to get Ole’s men fully firing, but the second half opened with Luton once again imposing themselves on the game.

United were not only struggling to dispossess but to keep hold of the ball for more than a couple of touches. Of the two teams, you could argue that it was Nathan Jones’ side who looked like the more confident and clear in their game plan.

Andrew Shinnie looked to be one of Luton’s most influential players and whilst nothing had come of his contribution so far, he seemed to be absolutely everywhere and at the heart of the Hatters’ much faster movement thus far.

Around the 54th minute, United looked to start settling into the game once again. Perhaps it was the sight of the substitutes beginning to warm-up, as not only did the players looked to start pushing forward more but the team actually began to press a bit more. Brandon Williams found himself out of position a few minutes later and picked up the first yellow card of the match.

The first real chances of the second half came in the 63rd minute, when United broke fast on the counter and despite Ighalo overplaying, Lingard managed to find the ball left of the six-yard box and had a snapshot cleared off the line. Moments later, the ball was recycled and Nemanja Matic nearly squeezed a strike in from range, but the Luton keeper had it well covered. United growing gradually.

United’s most impressive and intricate interplay came around the 70-minute mark when Wan-Bissaka infamously spider-like legs managed to rescue the ball from a scramble on the edge of the box and played a narrow pass through to Mata on the right. The ball back across was good but Lingard’s effort was just over the bar.

This was the Red’s most promising spell yet as van de Beek was denied a poacher’s finish from close-in and the Maguire nearly headed home from the subsequent corner. Momentum seemed to be building at this point and, more importantly, confidence – even in defending.

The first United subs were made in the 78th minute, as a triple change saw Mata, Ighalo and van de Beek replaced by Rashford, Greenwood and Bruno Fernandes. Ole clearly looking to finish the game off now but also get some more minutes into key players’ legs.

This lapse in the flow nearly caught the Reds off guard though, as just a few minutes later, an otherwise quiet Henderson had to pull off an impressive reflex safe at the near post and Eric Bailly blocked the rebound from off the line. A good display of sharpness from two players looking to force there way into the side.

United did eventually re-establish their hold on the game in the 88th minute, when all three subs came together to fashion a fast-paced, albeit slightly fortunate move. The ball pinged rapidly back and forth between the Greenwood and Fernandes, spending some time in the air too, but it did manage to find its way to Rashford, who swiftly slotted home his first of the season.

Quality clearly paid off in the end, as just before the game drew to a close, United added a third through Mason Greenwood. Coming off the right to weave that familiar combination of step-overs and checking back and forth to curl the ball into the far corner. Smooth as you like.

It may not have been the most challenging opposition, but Luton certainly put up a fight and highlighted that United still some way off proper match pace. Here’s hoping that getting the first win under the belt and the positive cameos at the end serve as a shot of positivity before the next game.

It’s fair to say that no one was absolutely prolific on this particular occasion, but man of the match simply had to go to Juan Mata. Even despite his goal, he was the main architect of the attacking play on the night – the perfect kind of player in a game with regular periods of congestion like this one.