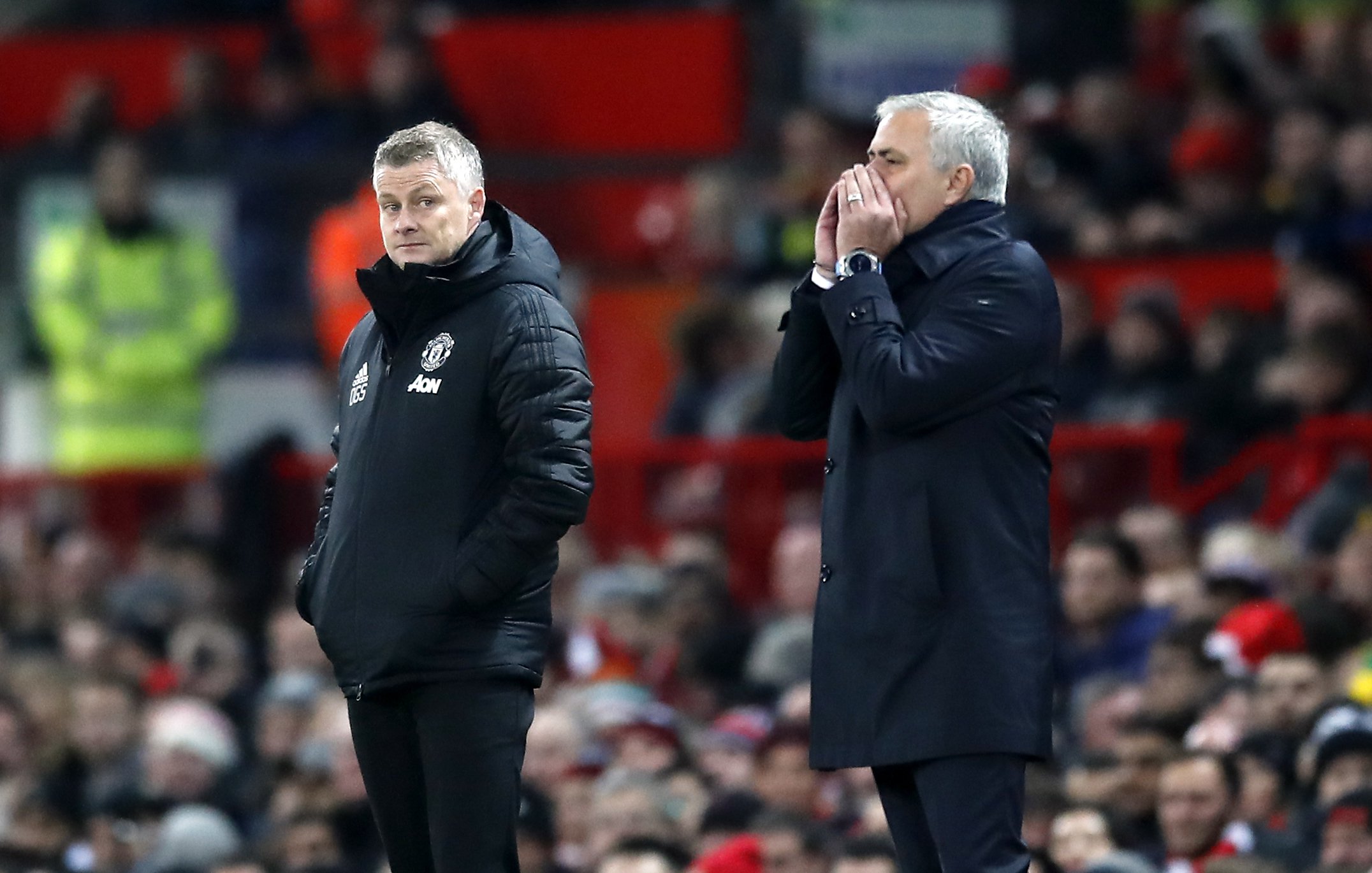 With cup competitions out of the way, United return to Old Trafford to welcome fellow top four-hopefuls Tottenham.

Ole Gunnar Solskjær hasn’t yet lost against José Mourinho, who has started his first full season as Spurs boss in much better fashion than he ended his maiden campaign.

There’s one last Premier League bout for these teams before the international break, with plenty of plot threads.

Following a dismal opening to the season, losing at home to Everton, Spurs have steadied the ship and made that their only real blip in performance.

A resounding win at Southampton, in which Harry Kane bagged four assists and Heung-Min Son four goals, boosted confidence before a Covid-related bye in the Carabao Cup allowed them to advance and beat Frank Lampard’s Chelsea on penalties midweek.

Also in midweek – yes, they played Tuesday and Thursday – they demolished Cypriot side Maccabi Haifi 7-2. Kane bagged a hat-trick and even Dele Alli, reportedly out of Mourinho’s future plans, featured and scored.

However, their last league match on Sunday wasn’t as straightforward. Hammering Newcastle from minute one, a freak 93rd-minute penalty caused chaos as the Toon Army snatched a point from their first shot on target.

So it’s been topsy-turvy in the top-flight this term and progression by hook or by crook in the cups for a Tottenham team still seemingly not quite married with Mourinho… yet.

To many’s surprise, after Daniel Levy decided to opt for the government’s furlough scheme over the summer, signings haven’t stopped coming through the swanky Spurs doors.

Those are all exciting additions but none are quite a fan-infatuating as the return of Gareth Bale on an eye-watering loan from Real Madrid.

He’ll miss this match and will take time to regain his fitness. Nevertheless, if he can regain his form from his White Hart Lane days, we better all be worried.

Finally to wrap up this overview, Friday saw Tottenham complete the capture of highly-rated Brazilian striker Carlos Vinícius on loan from Benfica.

He’s expected to play second fiddle for Kane as Spurs hope to supplement a stretched squad, set to play the most matches of any English Premier League outfit this campaign.

Onto talking tactics now and Mourinho has a conundrum due to some inconvenient injuries.

Both Giovani Lo Celso, a key playmaker, and Son, no need to mention his merits, are expected to miss out, so Spurs’ strategy will likely be to give up possession and play with a low block – no shock there.

Doherty, Ben Davies, and Reguilón all thrive as wing-backs, while Eric Dier and Mourinho’s other options at centre-back suit a three-man shape, the formation he went with against his old Chelsea.

Dier took an infamous trip to the toilet midway through Tuesday’s league cup match, as Mourinho hailed his performance on the pitch as ‘not human.’

Someone else whose midweek performance gained plaudits was the blistering Steven Bergwijn. He was a fierce force on Thursday and could start as an auxiliary attacker alongside Kane.

One of men more unlikely to be involved is Tanguy Ndombele. The club’s record signing (£63m) has bags of quality but has failed to be a Mourinho ‘mad dog’ since they teamed up.

Those animalistic tendencies are crucial in these clashes for a side hoping to soak up the pressure and explode when possible. Højbjerg and Mourinho favourite Harry Winks will likely start in the middle of the park.

Anticipate a tedious affair, with the Lilywhites looking to frustrate United as much as they can over 90 minutes.

“They have lots of good players, it’s going to be, of course, a difficult match, but I also don’t think it is going to be easy for them.” – José Mourinho

Two winning trips to Brighton in two competitions – 3-0 on Wednesday – will go down as a successful stint down south.

Returning home for only the second time this season, the real business returns before the break with a big game that’ll likely be looked back on as an important one for the Champions League race.

It might be being overplayed in the media but the needle is between Solskjær and Mourinho is hardly undeniable.

Each made remarks last weekend about crossbars and penalty boxes respectively.

In his pre-match press conference on Friday, the Red Devils boss said of his predecessor: “We are in strange times at the moment, you’ve got to sometimes have a bit of fun as well.

“It was a couple of innocent comments, for me José’s a very charismatic coach and manager.”

Turbulent transfer sagas aside, United look in a far better state than they did just a week ago, although Solskjær will recognise the undercurrent of uncertainty surrounding the squad as to whether they can kick on without reinforcements.

First-teamers look fresher, there’s an almost full-strength roster to select from and the fringe players did a decent job in the Carabao Cup but that shouldn’t bare much on the starting XI tomorrow.

The Italian targets won’t be involved, as Andreas Pereira has left for Lazio on loan, Diogo Dalot is close to joining AC Milan, and Chris Smalling is reportedly eyeing a return to Roma.

Dean Henderson made a stunning save at 1-0 on Wednesday but is unlikely to keep his place between the posts as David de Gea looks to do better than he did back in June against Spurs.

Dalot started his first game in months and looked rusty – albeit Aaron Wan-Bissaka would’ve been in line to return at right-back regardless of his deputy’s display.

Donny van de Beek was influential, along with September Player of the Month Juan Mata, but might have to wait until he comes off the bench to make an impact on this one.

van de Beek’s new teammate, Nemanja Matić, has praised his fellow midfielder following his arrival and looked ahead of the match here.

Paul Pogba, who made it three at The Amex thanks to a deflected free-kick, and Marcus Rashford both came on for cameos and should start this one.

Mason Greenwood is also set for the nod after he was controversially left out of Gareth Southgate’s England squad for next week’s trio of matches.

“I’m not going go into the transfer window now, of course all my focus is on Sunday’s game, the club’s always working hard to have as strong as possible a squad and if something happens in or out you’ll get to know.” – Ole Gunnar Solskjær

Coming off the back of midweek minutes and a glorious goal at the weekend, Rashford seems to be clicking back into gear. Meanwhile, Doherty could excel at right wing-back, giving his opposing winger something to think about. Expect this battle to go both ways.

Two players not afraid of a cheeky challenge, Højbjerg should be tasked with keeping Fernandes at bay. With Mourinho’s comments last weekend in mind, he better tell his own player not foul around the ’22-yard box’ because his fellow Portuguese may well punish his mad dog Dane.

Lynchpins of the national side despite their constant critics, no one can argue the importance of the pair to their respective teams. Maguire’s upcoming return to England will have to wait until he deals with Kane, who is simply on fire with 11 direct goal contributions in his six appearances. Even on Friday, Solskjær said: “We’ll do our best to keep him quiet, we have a Harry back there who’s looking forward to facing his international teammate.”