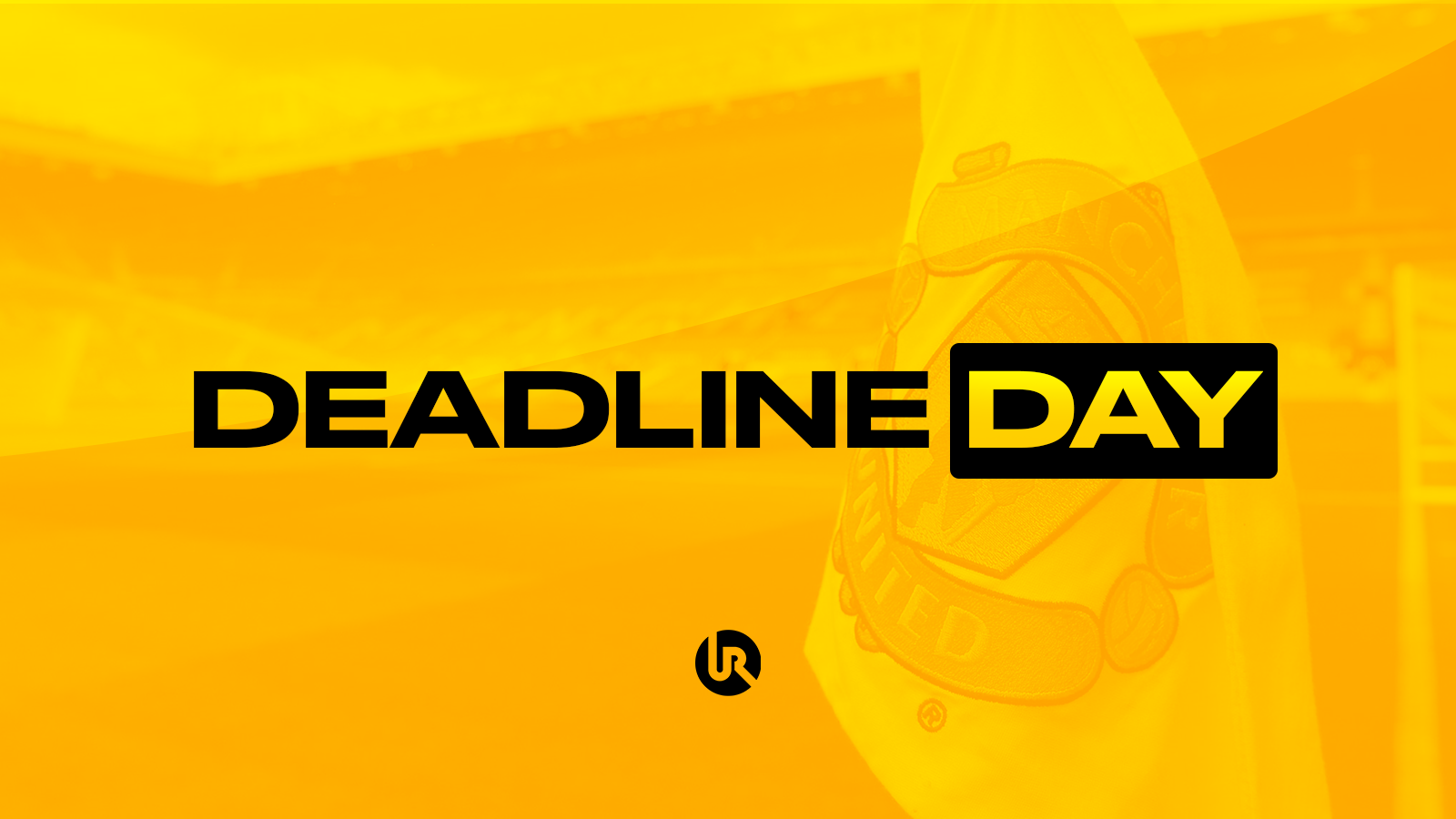 A long transfer window is finally coming to an end but with Manchester United still having a lot of business left to do, it’s likely that it will be a busy one for Woodward & Co.

Join us throughout the day and we’ll keep you up to dated with all the in and outs of what goes on at United on transfer deadline day.

UPDATE: 22:55
Manchester United have completed their fifth and final signing of the summer, according to talkSPORT.

Facundo Pellistri joins Solskjær’s side just before the deadline.

UPDATE: 21:59
Manchester United have announced their third signing of deadline day as Edinson Cavani joins the Reds on a free transfer.

Cavani, who left Paris Saint-Germain in the summer, has been a free agent since July but will join Solskjær’s side on a two-year deal.

The number 7 has been vacant at Old Trafford since 2019 but the Uruguayan will be the next occupant of the iconic number.

“Manchester United is one of the greatest clubs in the world, It’s a real honour to be here. I cannot wait to experience the Old Trafford atmosphere when it is safe for fans to return,” Cavani said upon his arrival.

Traoré will stay at Atalanta until January.

UPDATE: 20:32
After a late deadline day scare, Chris Smalling’s move to AS Roma has been made official.

The defender leaves United after 10 years – Roma will pay €15 million with another €5 million in bonuses.

UPDATE: 20:01
An issue has been found in Manchester United’s sale of Chris Smalling to AS Roma, according to Italian journalist Francesco Porzio.

The deal was believed to have been completed just minutes before the transfer window deadline in Italy, which was 19:00 BST, but new reports say that there is an investigation into a document from the FA.

Porzio claims that AS Roma believe that everything was signed off in time for the transfer to be completed but the deal is now being reviewed.

Confirmation on whether the deal will go through will come later this evening.

UPDATE: 19:44
Ousmane Démbélé to Manchester United is off, confirmed by BBC’s David Ornstein.

Manchester United were only interested in a loan deal whilst Barcelona insisted on a sale.

Reports were confirmed by the Guardian, who say that United have ended talks over a loan.

UPDATE: 19:23
Chris Smalling’s move to AS Roma has been completed, confirmed by Sky Sports Italia.

Manchester United will receive £15 million plus bonuses for the defender.

UPDATE: 19:20
Manchester United are now considering signing Ousmane Démbélé on a permanent basis, according to reports.

Alex Telles has been confirmed, with Uruguayan pair Edinson Cavani and Facundo Pellistri to be announced imminently but according to Constantin Eckner, broadcaster for BBC, a supposed move for Démbélé is not over.

The journalist claims that United are now considering signing Démbélé outright rather than trying to agree a loan deal with Barcelona.

UPDATE: 18:40
Facundo Pellistri, who is expected to join Manchester United imminently, will join the first team right away instead of settling in with the youth system as previously reported.

According to James Ducker, the Uruguayan is ‘expected to be parachuted straight into first team’.

UPDATE: 18:16
Chris Smalling is set to join AS Roma after a deal was struck with the Italian club. Negotiations have fallen through on a number on occasions but the defender is finally getting his move to the club he spent last season with.

According to The Athletic’s David Ornstein, a fee between the two clubs was agreed on deadline day. AS Roma will pay €15 million up front with a further €5 million in bonuses.

UPDATE: 18:06
Manchester United have announced the signing of Alex Telles from Porto FC. The left-back, who will now challenge Luke Shaw, has signed a four-year contract with an option for a further year.

Telles commented on his move: “To join a club of Manchester United’s prestige is a huge honor,” he said. “You have to work hard to get to this moment in your career and now I am coming to this club, I can promise I will give everything in my heart to be a success here. I have won many trophies at FC Porto and I wont to continue that here. The manager has a clear plan and direction for this team and I can’t wait to pull on the famous shirt.”

UPDATE: 18:04
Facundo Pellistri is set to be one of at least three deadline signings for Manchester United.

The young winger will join from Penarol on a five-year deal, according to Uruguayan journalist Sebas Giovanelli.

It is however believed that Pellistri will initially join United’s youth setup rather than the first team.

UPDATE: 15:49
A move for Barcelona’s Ousmané Démbélé is gathering pace on deadline day. It looked like a deal for the winger was unlikely earlier this morning but Dembele did not train with his Barcelona teammates on Monday and left the training facilities.

According to Gerard Romero of RAC1 in Spain, it is possible that Manchester United sign the winger on loan and will accept to cover wages in full, a proposal that Barcelona like.

UPDATE: 15:12
Manchester United ‘close’ to announcing deals for Edinson Cavani and Alex Telles, according to reports.

It is believed that the pair have already passed their medicals and signed their Manchester United contracts and an announcement is imminent.

According to James Cooper of Sky Sports, Manchester United are ‘rearing up’ to announce the two signings.

UPDATE: 14:58
Manchester United have had a loan bid for Watford’s Ismaila Sarr rejected, according to Telefoot Chaine. The publication say that United are negotiating with Watford over a transfer.

According to Fabrizio Romano, United have enquired about Sarr but face similar problems as they did with Ousmane Démbélé.

Manchester United prefer to sign Sarr on loan but Watford insist on selling the winger.

The transfer deadline for clubs within the top English leagues is open for two more weeks so United can still sign Sarr after tonights deadline.

UPDATE: 13:24
Everton have made contact with Manchester United with view to sign Sergio Romero on loan, according to Paul Joyce of The Times.

Manchester United prefer to let Romero go on a permanent transfer, with Dean Henderson and David de Gea above the Argentina international in Solskjær’s pecking order.

UPDATE: 12:40
Amad Traoré will join Manchester United next January after a deal was agreed with Atalanta.

According to Fabrizio Romano, the winger will join United after the turn of the year due to pending a pending work permit. Atalanta will receive €30 million plus bonuses for the transfer.

UPDATE: 12:17
It looks like Manchester United will be signing a right-sided winger after all. Amad Traore, an 18-year-old winger from Atalanta, is set to sign for United according to Gianluca Di Marzio.

The report was backed up by Fabrizio Romano who says that a work permit for the Ivorian is pending – a deal could be concluded now or in January.

UPDATE: 11:55
Chris Smalling’s move to AS Roma has been thrown into doubt. According to BBC’s Howard Nurse, the move is ‘unlikely’.

UPDATE: 11:13
Ousmane Démbélé will remain a Barcelona player this year, according to RMC.

The French winger will not be joining Manchester United in a deadline day move.

UPDATE: 10:51
Kingsley Coman has emerged as an option for Manchester United on deadline day as they continue their efforts of securing a right-sided winger.

The French winger is currently injured but United consider him an option, according to Rob Dawson of ESPN.

UPDATE: 10:49
Edinson Cavani has completed his medical and will sign a two-year contract with Manchester United. The contract will include a break clause for either the player or the club to exercise next summer. The Uruguayan will become United’s second signing of the summer.

UPDATE: 9:44
Alex Telles has arrived at Carrington for his Manchester United medical. The left-back, who joins from Porto for €20 million, will sign a four-year contract with an option for an additional year.

UPDATE: 9:30
Departures are just as important as arrivals today.

According to ESPN, Manchester United could offload both Sergio Romero and Marcos Rojo. Both players are surplus to requirement, and the club are open to offers.

UPDATE: 9:26
According to the MEN, Southampton have enquired about the possibility of signing Brandon Williams on loan.

Read more about the story here.

UPDATE 08:43
Facundo Pellistri seems to be one of the players who could be coming in on deadline day.

According to Tenfield in Uruguay, the winger has passed a medical with United.

UPDATE 08:31
It seems like United’s move for Ousmane Dembele remains heavily reliant on whether Barcelona can sign Memphis from Barcelona.

According to Gianluca Di Marzio, Memphis is on his way to Barcelona and a transfer is imminent – this would pave the way for Dembele to make the move to United but reports last night said that United had not given up on Jadon Sancho just yet.