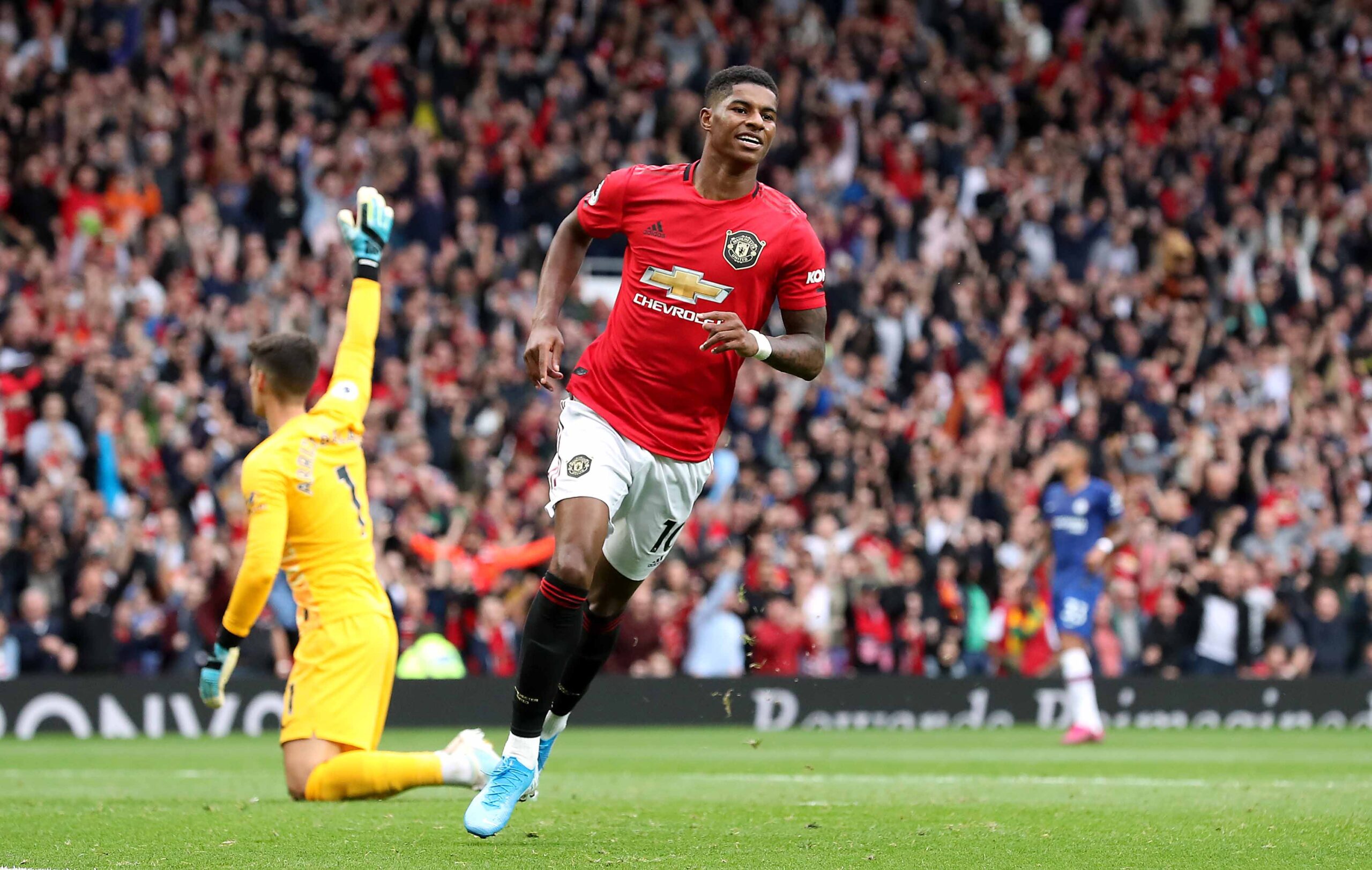 Thanks to another memorable night in Paris, Ole Gunnar Solskjær became the first Red Devils boss to win 10 successive ‘away’ trips but now returns to where his side have lost both of their opening Premier League fixtures.

After being so good on the road, it’s time to make some home comforts.

Producing a fourth-place finish in his first season back at Stamford Bridge, Lampard won Roman Abramovich’s faith as the Blues broke the bank this summer.

Spending almost £200m on transfer fees, Chelsea’s team has transformed and so have their aspirations.

German duo Kai Havertz and Timo Werner were both linked with Europe’s elite clubs, and the additions of Ben Chilwell, Edouard Mendy, Thiago Silva, and Hakim Ziyech have seen Lampard’s side strengthens in the right areas.

Highly-rated Havertz is improving every game, while Werner has begun firing in front of goal.

However, results have been inconsistent so far; losing one and winning & drawing two each in the top-flight.

With 23, their games have involved the most goals, including two 3-3 thrillers which will seem like four points dropped in hindsight.

The eight they’ve shipped is further cause for a lingering concern, with their 54 goals conceded last term being the highest ever tally for a team that finished inside the top four.

Goalkeeper Kepa Arrizabalaga boasted the worst save percentage in the league for starting stoppers, and the Spaniard has started poorly with three errors leading to goals in just three games.

Expectations have been now tempered at Chelsea due to frustrating form but a win in this one could boost confidence tenfold.

One to watch: Christian Pulisic

Even though the towering Frenchman may have usurped Arrizabalaga after overcoming an injury, he’s still acclimatising to the English game.

One man who won’t need time to adapt is Petr Čech.

Yes, you read that right, as this week the club’s technical and performance adviser was named in their 25-man Premier League squad as potential cover for their younger ‘keepers.

Strangely, he won’t be on the bench tomorrow.

Their Tuesday stalemate was a disappointing result but included a clean sheet, their third of the season, although they are still without one on the road.

Silva’s experience at the back will likely prove pivotal in games such as these, while his partner remains ambiguous.

Andreas Christensen and Kurt Zouma are auditioning for the role, while Antonio Rüdiger remains out of Lampard’s plans.

Chilwell should start, having made a solid start to life in West London after injury stuttered his pre-season.

The right-back slot is not as simple.

Moving to midfield, where often world-class N’Golo Kanté and Jorginho are set to hold, their selections problems are more positive.

With Ziyech now fit, he and fellow right-wingers Christian Pulisic and Callum Hudson-Odoi are battling it out for a place on their favourite flank.

Mason Mount, who divides opinion, is expected to operate on the left and drift inside to allow Chilwell to maraude down the wing.

The pair of Bundesliga exports will likely be deployed down the centre and are both deadly on the counter.

Their pace and technical ability to play one-touch football can destroy defences if they’re even half a yard behind the speed of play.

If other teams towards the top of the table weren’t faltering, Chelsea could’ve already been beginning to wave their title ambitions goodbye but with the race wide open, who knows?

They failed to gain any silverware last season, losing against Arsenal after beating United in a one-sided semi-final at Wembley.

Prior to that, though, the Red Devils had the Pensioners’ number, winning both league fixtures and killing them off in the Carabao Cup.

This one is set to be a battle of wits, potentially not the goal-fests we’ve been used to as of late.

Chelsea last claimed United’s scalp at Old Trafford in 2013, when Lampard was on the pitch for his beloved Blues, and now Juan Mata scored an 87th-minute winner for his the then European champions.

“We can talk about certain games where big teams have conceded a lot of goals, or there have been big turnarounds in games, but I’m not interested in that. Man. United are a very good team, we played them enough last year to know that, and I’m not concerned with what might have happened in games before” – Frank Lampard

Next match: Krasnodar [A] Wednesday, 28 October

If that sounds familiar, you weren’t having dejâ vu on Tuesday as United took all three group stage points home on their Champions League return.

It’s been a staple of Solskjær’s tenure in charge: dramatic results when the odds are against them.

However, the oneness is on them to earn their first three home points of the campaign at Old Trafford.

Conceding nine at Old Trafford hasn’t happened for a whole season before, nevermind in the opening pair of outings.

Given the opposition’s goalscoring prowess – nobody has scored more than their 15 – it’s imperative to be better at the back as well as at the other end, having scored just twice in the two home games.

The last time United triumphed in Paris, they took a trip to London and were defeat by Arsenal is frustrating fashion, so that’ll surely be in Solskjær’s mind.

Harry Maguire, Mason Greenwood, and Édinson Cavani missed the midweek win and in his pre-match press conference today, their manager told reporters: “I hope and expect all three to be available.

“I think they all have a chance. Édinson wants to tick all the boxes thanks he’s gone through in his program and feel ready to make an impact.”

He added: “It seemed positive yesterday with Mason and Harry.”

On Greenwood, Solskjær said the English media were starting to ‘go after’ the teenager after reports of his tardiness came out on Wednesday.

He stated: “I have to disappoint you, he’s never late for training. He’s never a problem when he’s in the training ground.

“He’s always on time, I’ve seen the stories and some ex-United players talking about him and they don’t know what they are talking about.”

Senior teammates Nemanja Matić and Paul Pogba were both named on the bench in Paris but either could return for Man of the Match contenders Fred and Scott McTominay.

Donny van de Beek is unlikely to feature from the off and when quizzed about the Dutchman’s lack of minutes so far, his boss said: “Donny’s fit enough but of course it’s competition for places, it’s giving him time to settle in and adjust to his new teammates, it’s a new league.

Axel Tuanzebe was incredibly imperious on Tuesday, keeping Kylian Mbappé quiet and should start for his sixth appearance in 11 months.

Anthony Martial is serving the second match of his three-game suspension, so Cavani could make his debut, as Alex Telles did terrifically in France.

As Chelsea rely on full-backs to initiate attacks, Telles and his fellow wide defenders will have to be tight in order to prevent them from penetrating.

Should Solskjær stick with a three-man defence, United could frustrate the Pensioners into having the Lion’s share of possession in areas they’d prefer not to have it.

Albeit a typical away tactic in big games, it’s worked well at home before, particularly against Manchester City in March and Liverpool last year.

For it to work, the Red Devils will probably have to be more clinical than midweek, as Chelsea would likely be less willing to commit men like PSG, making it harder to create chances.

In tonight’s U23 game against Everton, Facundo Pellistri, Marcos Rojo, and Brandon Williams will all play for much-needed minutes.

“Football is just settling now and getting into their shape, we know it’s gonna be a tough game against Chelsea, we’ve played them five times last season, maybe four or five last year, two teams that know each other really well.” – Ole Gunnar Solskjær