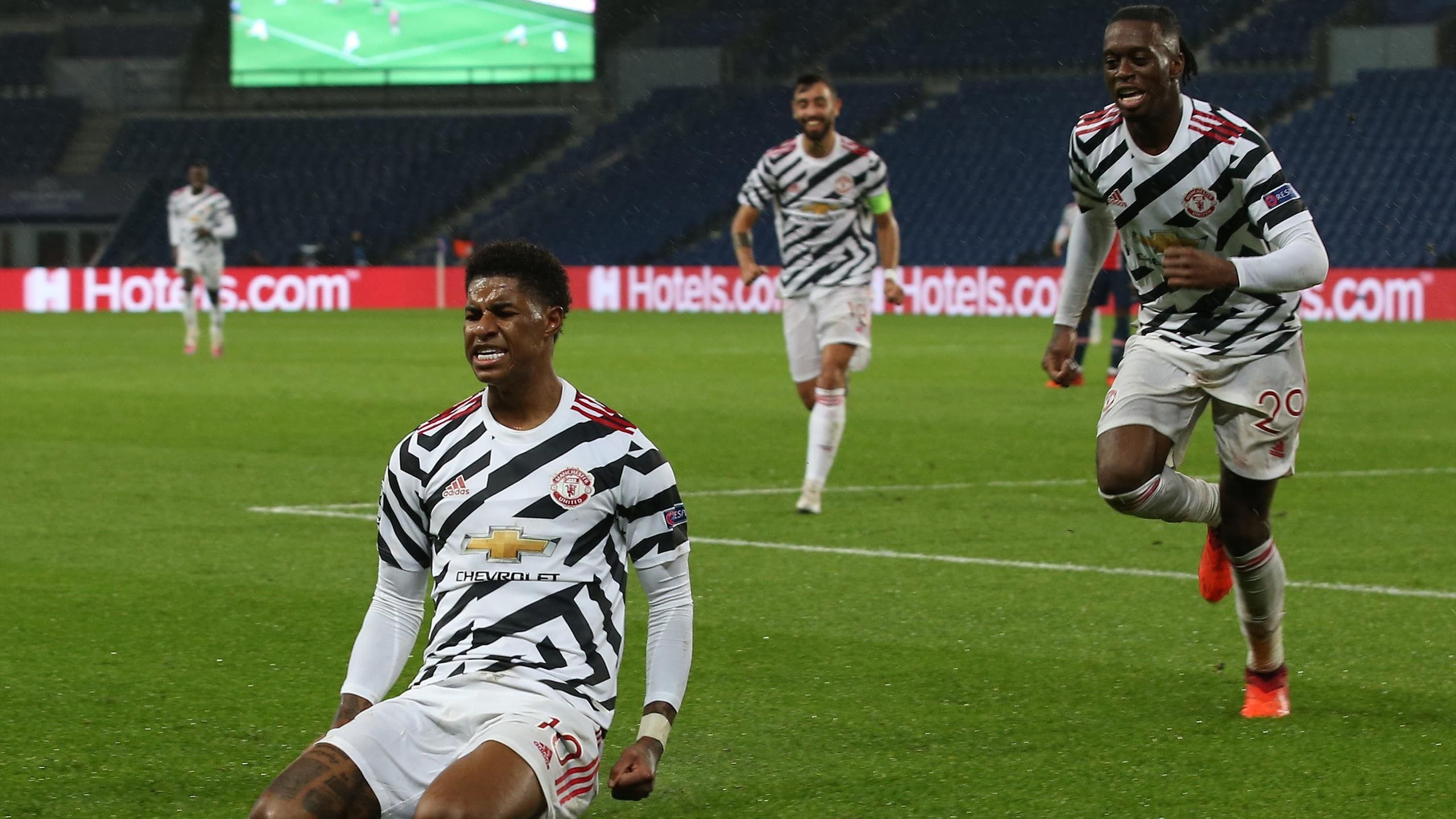 Manchester United are back in continental action tonight as they welcome RB Leipzig to Old Trafford.

Ole Gunnar Solskjær will feel like an elderly boss compared to 33-year-old Julian Nagelsmann, whose Red Bull-funded outfit are one of the world’s most exciting teams.

It’s another recent semi-finalist for the Red Devils in Group H as Champions League football returns to the Theatre of Dreams.

Founded in 2009, following a few years of negotiations in East Germany, RasenBallsport (Lawn Ball Sports) have had a clinical rise to the top of German football.

Four promotions in seven seasons saw them arrive in the Bundesliga to plenty of hatred in 2016, but have established themselves as an elite team ahead of the most historic clubs since.

Red Bull have got around the federation’s football ownership laws – like they have done in Salzburg and New York – to keep their stake at 99%, which has seen them face criticism from opposing fans and figureheads almost every week during their ascent up the pyramid.

Playing in a progressive way, their acquisitions from Austria and America have proved both useful and profitable, with many players switching between clubs in recent years.

Based in the state of Saxony, they’ve put East Germany back on the map in the higher Echols of the sport thanks to that innovative style.

Southampton manager Ralph Hasenhüttl was at the helm for their first two years in the top-flight and his time was sandwiched by former sporting director Ralph Rangnick, revered as one of the sport’s best in his field.

Despite solid showings in their first three campaigns, Leipzig laid the groundwork for a new coach to come in and transform the team.

After Hoffenheim saw success with him from the tender age of 28, the club identified Nagelsmann to take the reigns.

His fluid style of football seemlessly suited RB’s squad, and in his first season, guided them to the Champions League semi-finals, losing Paris Saint-Germain 3-0 in August.

That made him the youngest ever boss to manage at that level and is another sought-after RB product if rumours are to be believed.

A win at home to İstanbul Başakşehir on matchday one ensured their excellent start to the season will give his players confidence, so let’s dive into who they are.

One to watch: Christopher Nkunku

Hulking Hungarian stopper Péter Gulácsi has made 150 appearances for Leipzig since a move from Salzburg in 2015.

In four of his last seven games, the vice-captain has kept a clean sheet and shipped just 37 goals in the Bundesliga last season, the second-lowest to Bayern Munich.

Frenchman Upamecano will start at centre-back, finally featuring at Old Trafford after almost joining the club in 2016 for just £700,000.

He’s now one of football’s most coveted central defenders, with the 22-year-old (today, in fact) being eyed up by the elite.

Knee injuries stalled his development in 2019, but the ball-playing centre-back showed he’s still ready for the big-time with a monstrous display against Atlético Madrid in the quarter-final.

Manchester City loanee Angeliño will likely operate at wing-back for this one and scored a brace against Başakşehir last time out.

Chief play-maker Nkunku is comfortably their main creator, forging almost three chances per-game for his side and made a sensational seven at the weekend.

6ft 4in striker Yussuf Poulsen could be a problem – not the typical target man – with his good technical ability. The Dane already has three goals to his name this term, having been at the club since 2013.

However, Crystal Palace flop Sørloth may to start up front, able to benefit from the creativity of Emil Forsberg, Kevin Kampl and the returning Sabitzer in midfield.

The Norwegian hitman scored an incredible 34 goals in 51 games last season for Turkish side Trabzonspor but is not yet off the mark for Leipzig, who secured his services for just £18m up-front in the summer.

Although they played with a four-man defence in their weekend win over Hertha, Nagelsmann is likely to revert to his favoured three-man back line at Old Trafford.

Ravaged by injuries to key defenders, in particular, he’s tinkered with his team lately and might have to again tomorrow.

Interestingly, though, they shift systems mid-match, with their flexible players allowing the German gaffer to alter his formation when desired.

Playing with press triggers rather than in the typical Gegenpressing style, their tenacious high-tempo style forces every player to attack and defend alike.

Still the youngest manager in the tournament, one would expect him to be inexperienced in the big fixtures, but with an almost 60% win rate in all competitions from 190 games, he doesn’t need to prove much more.

Off the pitch, he does his bit, too. Nagelsmann, along with Spanish midfielder Olmo, is part of Juan Mata’s Common Goal initiative and has been since 2017.

In an interview the Mail, he revealed his excitement ahead of the tie, saying: “I’ve never played in Old Trafford or been there. It will be a great experience.

“I watched a lot of games in the Theatre of Dreams and of Manchester United on television. Now to be part of the stadium will be perfect.”

He also went on to say: “I watched nearly every game of Manchester United 10 years ago, when I was a younger guy and a player.

“They have a lot of qualities in the final third & we have to be aware of these situations, close the space behind our defensive line. If we’re very aggressive and we’re watchful on these situations, then we are self-confident enough to talk about winning.” – Julian Nagelsmann

A drab draw with Chelsea continued United’s winless run at Old Trafford this term, but did improve home form with a clean sheet.

Now, Solskjær side’s stay there for what will arguably be a tougher test than last Tuesday in Paris, due to RB’s start to the season.

Needing to maintain momentum in the group, three more points would see them sit top by three points having played two of the most difficult matches.

In his pre-match press conference, he was asked about one of Die Roten Bullen’s key men, Upamecano, and he told reporters: “There’s always rumours and speculation about other players and Man. United.”

He added: “Since he’s playing against us tomorrow, I know he’s a very good player and we can see him close up.”

But enough about them, let’s look at the Red Devils.

Axel Tuanzebe should return to the starting XI following his rest on Saturday but who he’ll play alongside is a difficult decision, with Harry Maguire available again unlike last midweek.

Alex Telles was nowhere to be seen in the squad and in Tuesday’s training videos but would be suited to the wing-back role, unless Brandon Williams deputises.

Aaron Wan-Bissaka was also missing, likely due to the birth of his partner’s child.

Calls for Donny van de Beek to start are growing louder, but it’s unlikely that the £40m man will be given the nod in such a tactically testing game.

On the midfield dilemma, Solskjær explained: “It’s going to be a long season and the depth of our squad is better now.

He went on to say: “I’ve been part of a successful Man. United team myself and we had two players for each position.

“The most successful teams have that, who have been winning trophies.”

Scott McTominay, who impressed in Paris and joined his boss for the online presser, said: “When you play for United, you should want competition for places.

“You have to come in with that mentality every day to training. I feel like I’m better than I was three years ago and that’s down to the coaching.”

Given Anthony Martial’s domestic suspension, he could start up top alongside Édinson Cavani, who made a cameo against Frank Lampard’s men on Saturday evening.

Although Solskjær seems to prefer playing three defenders away from home, he might have to opt for the system to deny Die Roten Bullen’s wing-backs the space they need going forward.

Details aside, it should be decently-contested game with goals guaranteed if the teams throw caution to the wind.

Nevertheless, United are expected to counter and soak up Leipzig’s pressure, which could penetrate them plenty of times if they’re not careful.

“To get to 10 points as quickly as possible is our aim, and we’re focusing on the three points tomorrow night.” – Ole Gunnar Solskjær