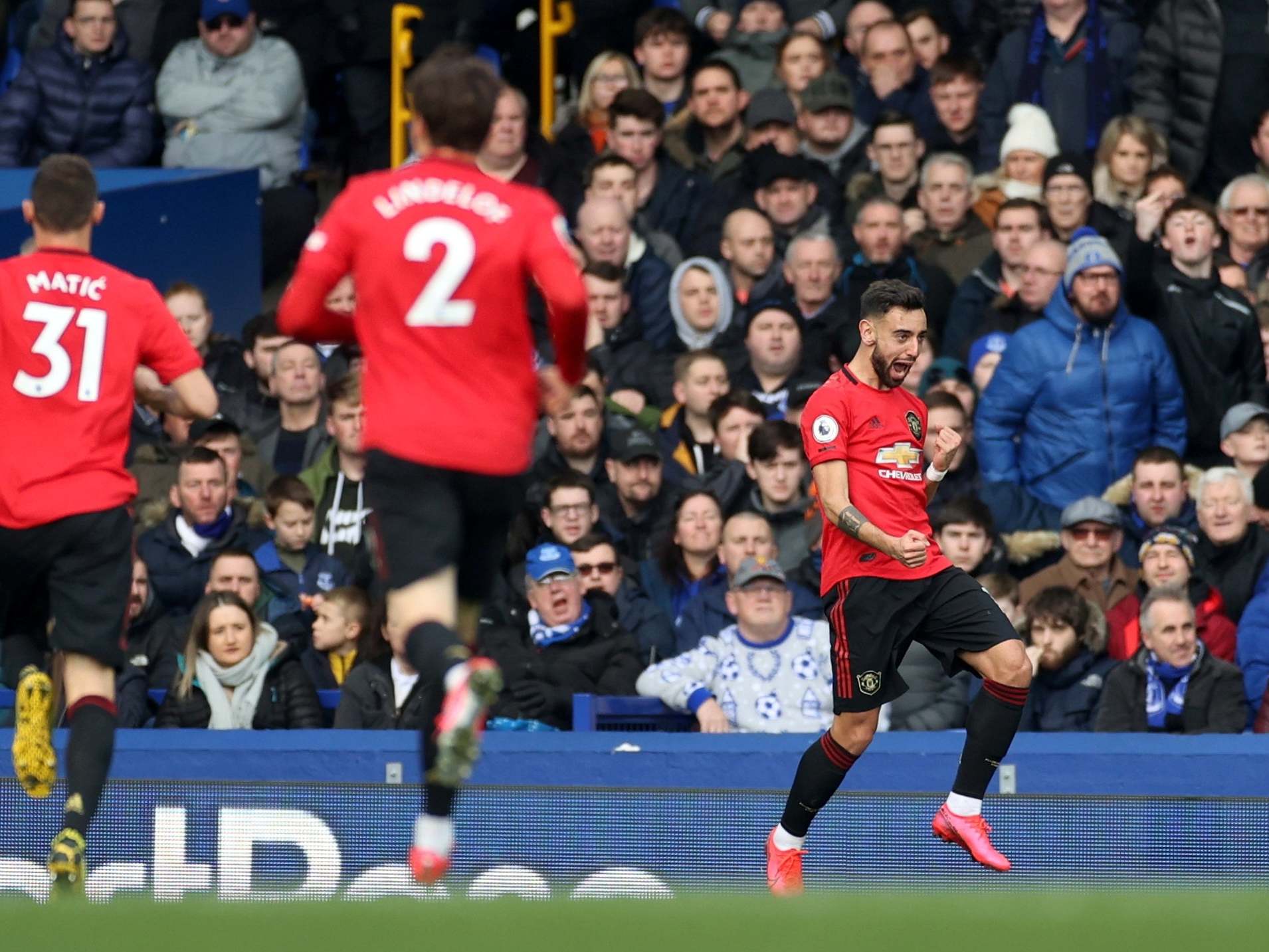 After two consecutive losses for the first time since January, United are hoping to get back to winning ways before the international break.

Ole Gunnar Solskjær faces arguably his biggest game at the wheel as he returns to Goodison Park, where following a 4-0 embarrassment in April 2019, he vowed to be successful with his beloved Red Devils.

Carlo Ancelotti’s high-flying Everton are next to stand in his way.

Having begun as the Premier League’s pace-setters, Everton look like a different side to the one Ancelotti took over almost a year ago.

Four successive wins in a perfect start to the season were halted by a controversial 2-2 draw in the Merseyside Derby a fortnight ago.

Two away defeats since sees them still among the Champions League challengers but an abundance of injuries and suspensions has slightly burst their bubble.

However, Dominic Calvert-Lewin continues to fire as he bagged a consolation last weekend, hitting 11 goals in eight games, already putting him five strikes off his total tally last term.

Summer signings James Rodríguez, Allan, and Abdoulaye Doucouré have transformed the team from dull to delightful, and the Toffees’ acquisitions of Ben Godfrey, Niels Nkounkou, and Robin Olsen have freshened up pivotal positions to add competition.

That’s pushed the team to new heights and it’d be a sure bet to see them finish higher than their 12th position in the Premier League last season.

One to watch: Allan

In terms of team news, Jordan Pickford was ‘rested’ for the trip to the North East and although Roma loanee Olsen did a decent job, England’s no. 1 should return.

Captain Séamus Coleman is set to return at right-back while Lucas Digne’s recently-reduced red card allows him to return.

Almost everything good during their terrific start to the term came through Rodríguez, making him a fan favourite within weeks.

The creative Colombian, who was a real coup for the Blues, has three goals and three assists in six top-flight appearances and is ‘100% fit’ following a muscle issue.

Likely thanks to working with Duncan Ferguson, Calvert-Lewin’s aerial dominance will make him a mean match for international teammate Harry Maguire, and mainly operates between the posts, profiting from Rodríguez’s right-on-the-money deliveries.

DLC has been so good that comparisons to Italian legend Filippo Inzaghi have been made, as the one-touch-finish, ‘born offside’ striker was also prolific under Ancelotti in the pair’s eight years at AC Milian.

Five-time Champions League winner Ancelotti (twice as a player and three times as manager) has always been praised for his pragmatism and ability to adapt with different teams.

The Italian initially set up in a solid 4-4-2 to cover for defensive deficiencies when he arrived in December; a very different style to his free-flowing title-winning Chelsea and La Decima-delivering Real Madrid teams.

However, his switch to 4-3-3 this season has seen freedom return.

Statistically, the Toffees don’t excel in any particular area, other than being second in the table for successful tackles per-90 with 10.9; much in part to Allan, who has the most tackles in the top-flight so far.

Their only clean sheet came on the first day of the season at Tottenham Hotspur and Pickford is still struggling for consistency, on top of receiving seemingly endless criticism for his mistimed tackle on Virgil van Dijk in last month’s derby.

His manager today told reporters: “We are talking too much about [him].”

‘Right-winger’ Rodríguez’s impact comes from him dropping into the number 10 space as Doucouré covers, allowing the Coleman to come forward and cross in sustained periods of possession, with most of their play-making happening out wide.

Six of their 15 PL strikers have come from set-pieces and Digne’s deliveries are also ones to watch.

Midfielder Allan, who worked with his manager at last club Napoli, is calm under pressure and has offered vital protection for centre-backs Michael Keane and Yerry Mina, as opposed to them often being exposed in previous systems.

The absence of Richarlison is a blow so Bernard, Gylfi Sigurðsson, or, more likely, Alex Iwobi will come in to replace but not offer the same goal threat as the number seven.

Ancelotti will be hoping he comes off the pitch a much happier man than in March when in this fixture, VAR ruled-out a last-minute winner and after losing his cool, Chris Kavanagh showed the legendary boss a red card.

The manager did point out this week that his side should have a ‘physical’ advantage over their visitors due to a midweek off.

Finally, Ancelotti offered sympathy for his opposing gaffer tomorrow, saying in his pre-match press conference: “I have sympathy for all managers, I have more experience than Ole.

“When things aren’t good, there’s only one person responsible. That is the manager. Every manager is under pressure and this is a privilege.”

“We prepared the game as usual, trying to find some weakness that they have, that every team in the world has. We are sure that tomorrow will be a difficult game because they have all the qualities a team needs. Creativity, power and good organisation.” – Carlo Ancelotti

Next match: Fulham [A] Saturday, 21 November

Requiring a response after an abject defeat last weekend, United fell to an embarrassing loss to Turkish champions İstanbul Başakşehir.

A duo of defensive lapses were punished, putting Solskjær under more pressure than he’s ever faced before as a club record 11 consecutive away wins came to an end.

The 4-0 loss at Goodison Park 19 months ago saw Solskjær vow to reporters post-match: “’If you want to play at this club, it has to mean more. I want my team to be the hardest working team in this league.

“I’m going to be successful here, and there are players there that won’t be part of that successful team.”

Coincidentally, these teams will meet again on Merseyside on Wednesday, 23 December in a Carabao Cup quarter-final.

Liverpudlians will be happy to learn that two of the Red Devils’ last managerial departures came following fatal trips to the city.

David Moyes’s side fell 2-0 upon returning to Goodison for the first time since swapping blue for red and was given the chop the next day, four years before José Mourinho lost a game and subsequently, his job at Anfield.

No surprise, then, about the Mauricio Pochettino reports before the usual managerial merry-go-round during an international break.

David de Gea should replace Dean Henderson, who had hardly anything to do in Istanbul.

The Spaniard, who announced yesterday that he and his partner are expecting a child, had a horror start in the aforementioned March match, as after just three minutes, his sluggish clearance was blocked by Calvert-Lewin and the ball ricocheted to roll into the back of the net.

Ahead of the game, de Gea, who turns 30 tomorrow, told the club website: “It’s a very good team and it’s always difficult to play against Everton away, to be honest, so we need to be very focused, train well and be 100 per cent ready to play against them.”

There’s some good news in defence, as Alex Telles today returned to training now that he’s recovered from Covid-19, so could be in contention to replace Luke Shaw.

Victor Lindelöf remained on the bench due to a back injury but is expected to be fit enough to come back into the back line next to Maguire, as on Thursday, Axel Tuanzebe looked like a man making his second appearance of 2020.

Fred was the only fit first-team midfielder to not feature in the defeat, so should start alongside Scott McTominay, regarded as the loudest player on the pitch in Turkey.

Mason Greenwood played the final 14 minutes, making him likely to get the nod from the off and occupy Digne up and down the flank.

Edison Cavani is still yet to start since his move and with Anthony Martial back from his ban, that doesn’t look likely to change.

United’s players can count themselves lucky they aren’t axed when results go wrong but tomorrow, the Red Devils need to show why it does mean more or face serious scrutiny.

“There is an expectation, we are at the best and biggest club in the world and you don’t expect anything but criticism then, it’s how you deal with that setback, and from what I’ve seen from the boys they’ve been very focused.” – Ole Gunnar Solskjær