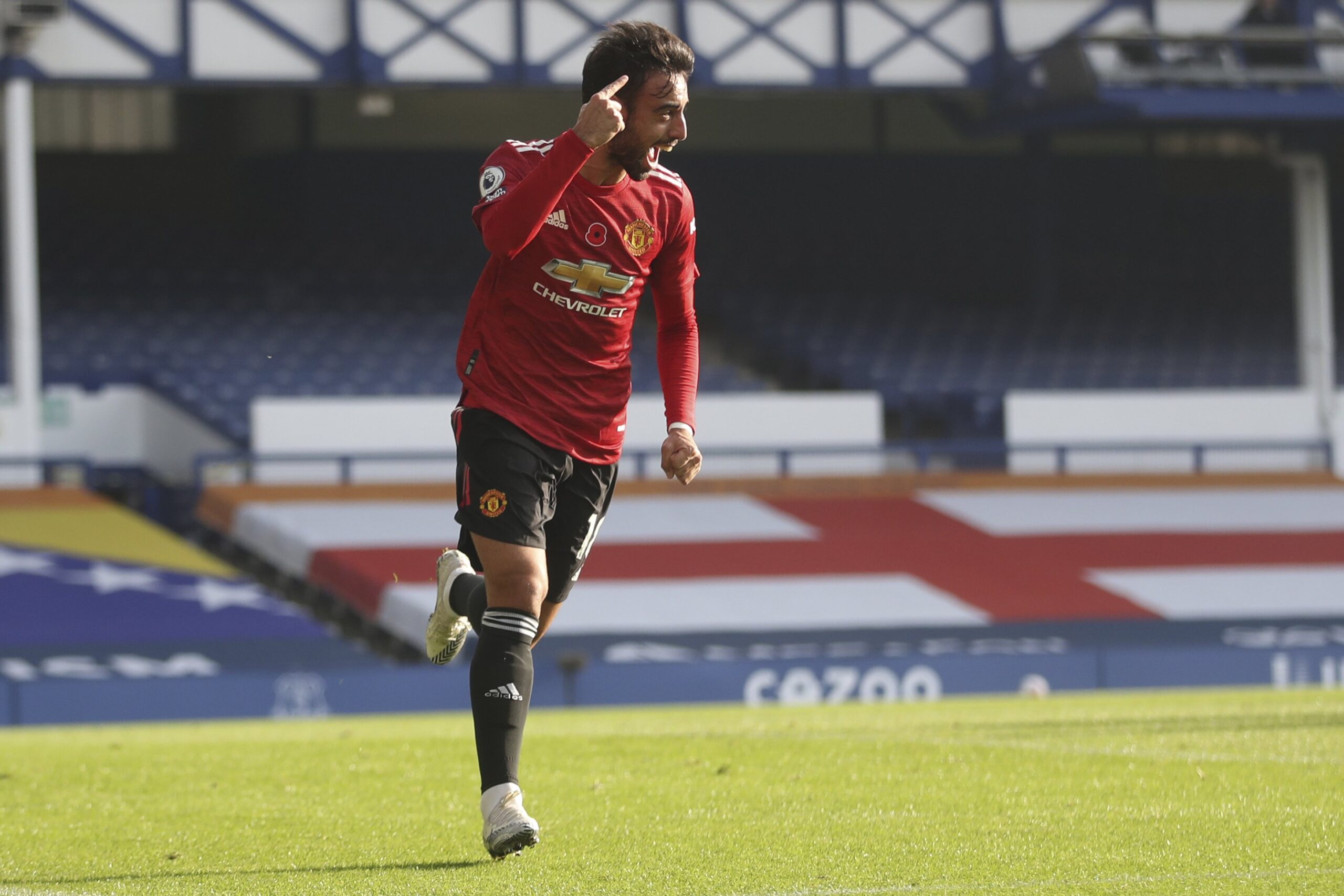 Having played 24 hours earlier than some of the other teams who were in action mid-week, United did make a slightly sluggish start against Everton, allowing an early goal to put lumps in the throats of Reds – not for the first time this season.

Fortunately, the quality of a select few players was enough to get a grapple back on the game and in combination with some lax defending from the Toffees, the Reds were able to clinch another away win. A much-needed result after disappointing performances against Arsenal and in the Champions League.

Scores on the doors

Didn’t have much to do on the day but didn’t really put a foot wrong. Could have been narrower to his near post for the goal, however, it’d be harsh to lay the blame at his feet.

Put in another promising performance, at least offensively. Still presents a number of concerns going back towards his own goal – positionally and in overall concentration – however, his willingness to get forward is clear and the cross for Bruno’s first was a good, competent assist. Came off injured, let’s hope with nothing too serious.

Continues to be one of United’s main concerns at the back. The doubts surrounding his ability in the air are well known, so it’s strange that he continues to match up against the biggest aerial threat in games. Was culpable for the goal, though Maguire should have come across to cover the second ball – some might argue it’s just good targeting from the opposition, but he remains a nervy weak link for me.

Though much more convincing than Lindelöf, the skipper also started the first half a little underwhelming. Nevertheless, he settled into the game and became much more commanding in the second 45. Some really good covering, a couple of full-blooded challenges and could have even had a penalty – did well to bring himself back into the game and finish strong.

Didn’t really put a foot wrong but Everton didn’t really go down his side enough to pose him a challenge. Did well to stretch the pitch and open up some space for the midfielders to stride, but didn’t really do enough going forward despite enjoying some space.

One of the two great enforcers today. Had the energy and awareness to sweep up diligently, play competent passes and speed up the tempo during occasional lulls. Another performance that justifies this current double-pivot.

In tandem with his partner, had a great all-round game. Commanded midfield areas, distributed well and looking to add a much-needed layer of screening with Fred in front of the backline.

Star of the show, as has often been the case since his arrival. Even with the occasional loose ball or wrong decision, his creativity, vision and outright quality won us the game. Had lots of room for his first goal but did produce a great header; second contribution ensured either a good assist or enough to sneak a goal. Finally, was unselfish to set up the substitute for a goal – a leader’s performance.

Probably the wrong choice in a game like this; Everton didn’t sit back enough, nor did his previous performance warrant enough to start him. Didn’t do anything wrong by any means, but failed to really affect the game.

Frustrating day for the MBE. Had some good moments and bad, with most of the latter just coming down to the wrong decision. Did well to find himself in the box for the second goal (even if he didn’t score it) and did the hard yards during many counter-attacking moves, but looked a bit fatigued, perhaps even injured slightly.

Relatively absent throughout most of the game. Should have done better with his chance in the first half and slowed play down on a number of occasions. Regularly came deep and wanted the ball to feet too often – still needs to nail down consistent centre-forward play.

Only a short 10-minute cameo but did well to press the ball and keep it high up the pitch.

A great little cameo that saw the Uruguayan net his first goal for the club, thanks to a simple ball from Bruno. Didn’t have much time to do anything but was there in the right place to secure the three points – let’s hope that was the first of many.

A solid little cameo despite having little to do. Seemed to help the defensive shape even playing out of position focused on his fundamentals. Should definitely be competing for the starting place alongside for Maguire in my opinion.