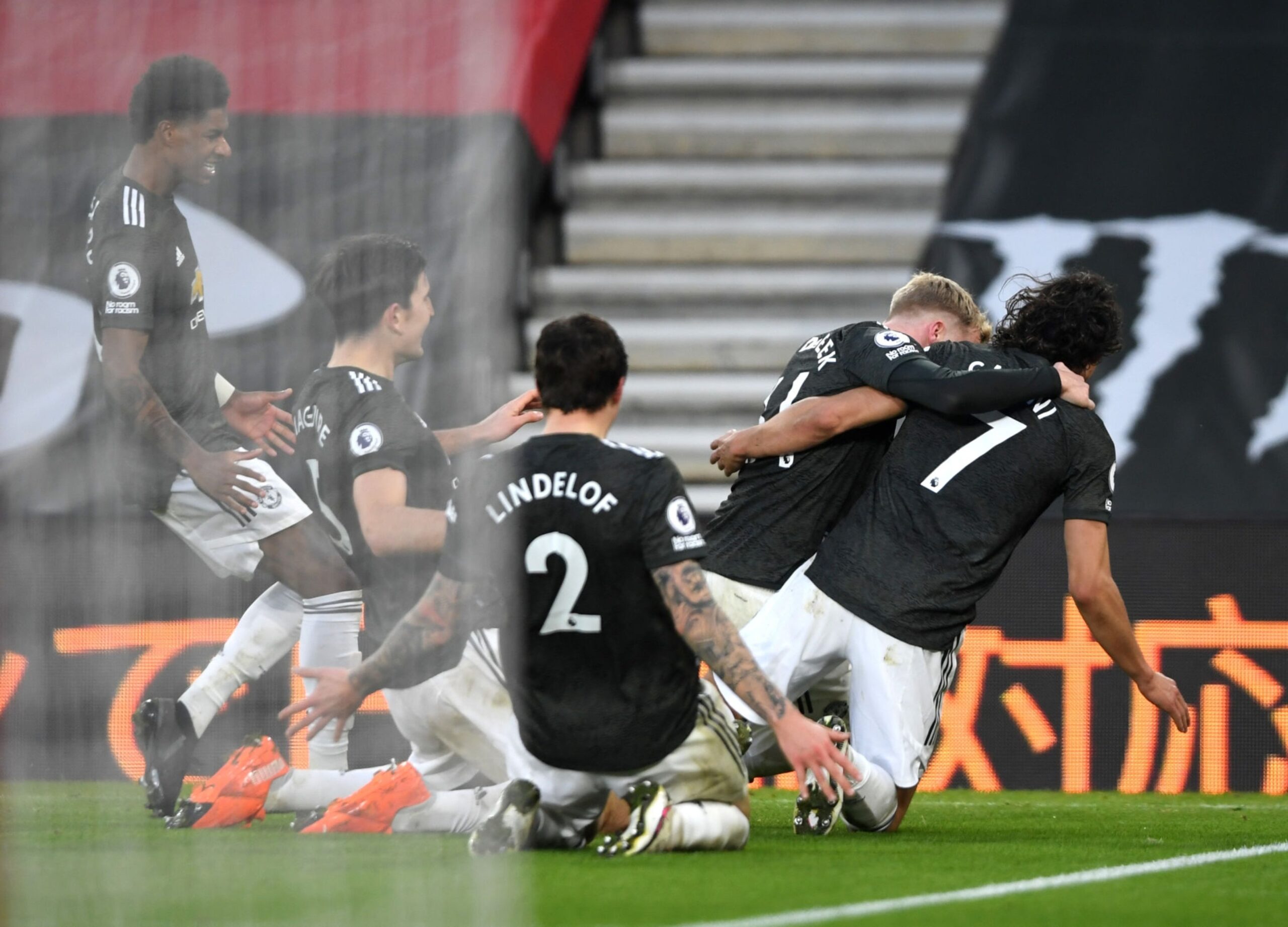 Edinson Cavani spearheaded Manchester United to come back from two goals down to earn a vital three points against a well organised Southampton.

United started off the first 15 minutes in electrifying pace, looking calm and composed on the ball when in possession. Ole Gunnar Solskjaer opted for a diamond in this game and at first, it looked to be working. The shape of the midfield was causing Southampton loads of problems, due to the balance it possessed.

Matic was the holding midfielder, controlling the tempo of play. Donny Van de Beek is the player who was assisting in turning transitions into United attacks. When the ball was turned over, the Dutchman offered an extra body going forward, which helped United in their offensive opportunities.

Out of possession, United were doing well regarding their pressing, playing Southampton to their own game. Matic has nullified any pass through the middle of the pitch attempting to pick out Che Adams, causing the Saints to be forced playing from the wide positions.

Out of nowhere, Southampton took the lead, which arguably changed the game.

The first goal came out of nothing and was a surprise for the spectators at home. Jan Bednarek climbed high above Marcus Rashford to score from the corner, which United failed to clear. A fantastic delivery from James Ward-Prowse caught out every United player, which The Red Devils napped on. Against the run of play, Southampton found themselves in the lead.

United had the opportunity to level after a mistake from Alex McCarthy led to Greenwood being through on goal. The goalkeeper smartly saved, but then managed to pick himself up to save a shot by Bruno Fernandes from point-blank range. The chance epitomised the first-half in a nutshell, with United having plenty of chances, only to be behind in the game.

Controlling the game, Southampton were in their comfort zone once in front. Kyle Walker-Peters struck the post after a deflected shot off Alex Telles span out for a corner. Shortly after this, they found their second goal from a set piece.

Fred gave away a cheap free-kick on the edge of the 25-yard-box. Before the ball was even placed on the turf, most people would’ve predicted this as ‘James Ward-Prowse territory’. The England international then scored a fantastic goal from the free-kick, curling in a brilliant attempt, injuring David de Gea in the process. Not many would argue if you said no goalkeeper would’ve kept out the effort.

Ole Gunnar Solskjaer deserves a huge amount of credit for reacting to United’s first half performance and in doing so, brought on one of the most prolific goalscorers in Europe over the recent decade. This, evidently, changed the match completely.

During the start if the second half, United came out on top, dominating possession but couldn’t unlock past the gritty Saints defence. Marcus Rashford found himself through on goal in a two versus one situation. Instead of squaring the ball to Cavani, he fired straight at Alex McCarthy, wasting another chance on goal.

Solkjaer’s side finally found the net in the 60th minute after Cavani found himself in space on the right flank. The Uruguayan picked out a glorious cross which fell into the path of United’s talisman, Bruno Fernandes. After a beautiful turn, he fired low past McCarthy to give his side a simmer of hope in the game.

The substitute was increasingly looking like the best chance of the game turning, and to his credit, had a massive impact on the game. His team were back in the game. He scored a diving, poaching goal, a finish that foreshadowed all the qualities he possesses as a number nine. The player converted a header from a deflected Bruno Fernandes shot, showing his strikers instincts by reacting to a scuffed effort.

It was the final 15 minutes that were set up for a nail-biting experience. United’s problem from the first half was failing to convert their chances. In the second period of the game, they did. Arguably, Solskjaer’s side were the better performers on the day and found themselves unlucky to be 2-0 down at the interval.

As the game approached towards the end of the final whistle, Cavani found himself drifting into the oppositional box. It was here where he picked up some space to get his second goal of the game, after another poaching header ended up in the back of the net, sending united into ecstasy. A great ball in by Marcus Rashford picked out his fellow striker, but the instinct from the 33-year-old was there to see. The standout performer in the match, he turned the game around for Solskjaer’s team, who looked flat after finding themselves behind.

This result leaves Manchester United in a good position in the table, in seventh, five points off top spot with a game in hand over their rivals. Solskjaer will be hoping his side continue their unbeaten run, which now stretches to four wins in a row.