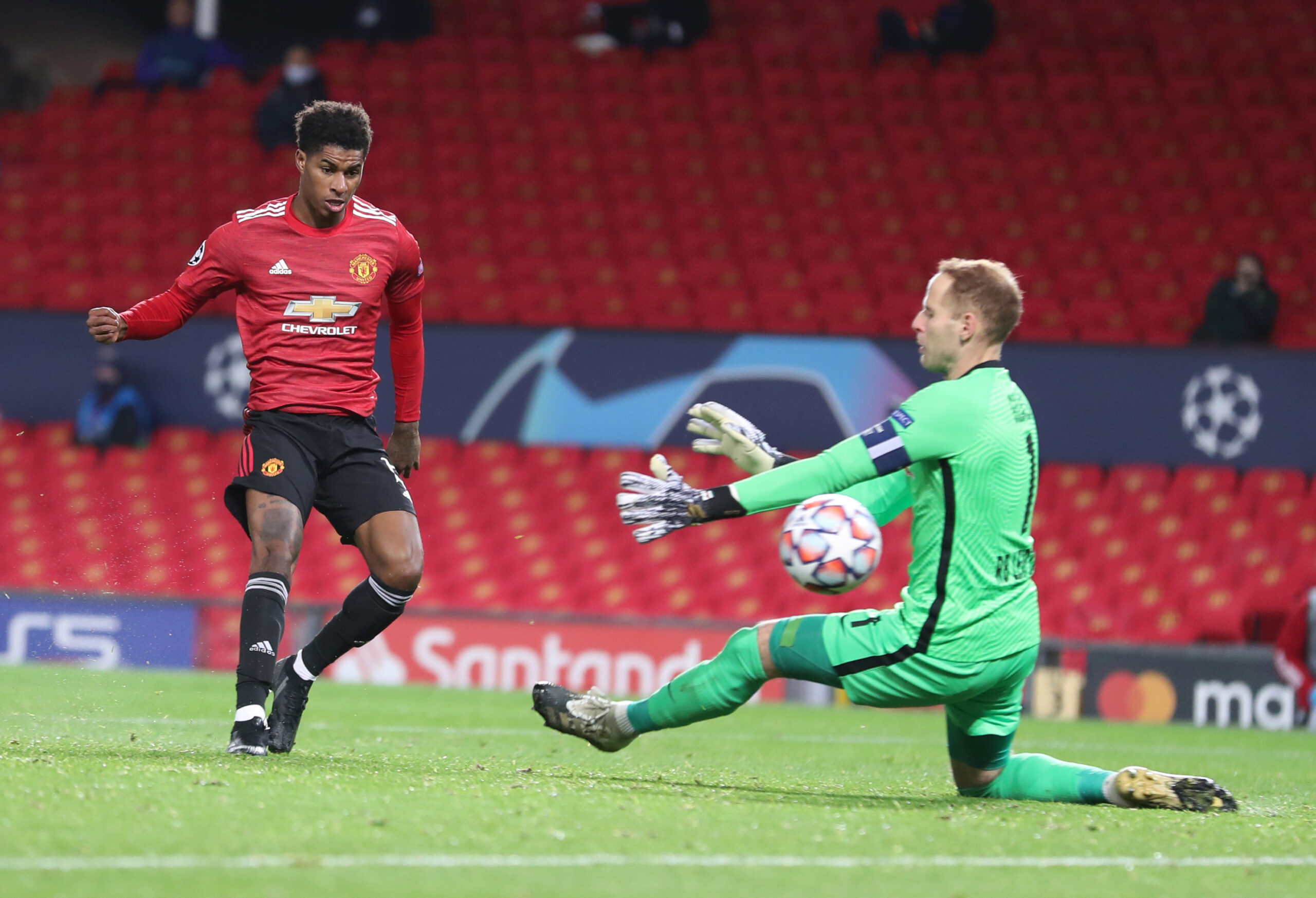 United face-off against Leipzig tonight in a make-or-break match to qualify for the Champions League knockout stages.

Ole Gunnar Solskjær’s side suffered a loss last week to take it to the final matchday, while Julian Nagelsmann’s men scored a late winner to keep their hopes of advancing alive, as they both sit on nine points.

Avoid defeat and the Red Devils are through.

Other Group H fixture: Paris Saint-Germain (can qualify with a draw) vs İstanbul Başakşehir

Following a flawless start to the season, Leipzig have been limping lately after United handed them their first loss of the season at Old Trafford six weeks ago, thumping them 5-0.

Needing the most to happen in order to qualify – either a win or, if PSG lose, a draw – Nagelsmann’s team have an uphill task to repeat or better their semi-final feat the last UCL campaign and avoid Europa League football.

A draw in Munich over the weekend wasn’t as good as it seemed on the surface, as they lead twice and created more big chances than the German domestic champions, squandering the opportunity to go level of points at the top of the table.

In the midweek, Leipzig had almost slipped up and needed a 92-minute winner to beat the bottom-placed side in Group H.

Die Roten Bullen gave away 1-3 lead in Istanbul before striker Alexander Sørloth came off the bench to score his first goal for the club in the dying embers.

Now, to quality, Leipzig need to turn the Red Devils over or hope Başakşehir cause an upset in Paris, as Germany’s seemingly most-hated side still struggle with a growing injury list and patchy previous results.

The Red Bull-funded club have spent their short existance being a nuisance to established opposition, and they’ll have to repeat that behaviour again this evening in East Germany – where they usually get the result they want.

One to watch: Emil Forsberg

With Dayot Upamecano suspended due to an accumulation of yellow cards, many believe Nagelsmann could revert to a three-man back line – one of seven different setups used this term.

It was the shape they switched to during the latter stages of the 3-3 thriller at Bayern, an example of how fluid Leipzig’s formation can be during games.

Goalkeeper Péter Gulácsi is expected to have Ibrahima Konaté, Willi Orban and Marcel Halstenburg in front of him, who could all be exploited on the counter attack but are comfortable in possession and when pushing into midfield.

Goalscoring full-back and Manchester City loanee Angeliño – who had some words to say on United when the group was drawn – should start at left wing-back, with centre-back-turned-right-back Nordi Mukiele on the other flank.

Captain Marcel Sabitzer only featured from the bench in the Old Trafford thrashing but should start in this one alongside Kevin Kampl in an dynamic, pressing duo in the middle of the park.

Although, grafter Amadou Haidara could get the nod having started the last two matches.

Usual attacking midfielder Emil Forsberg operated as the focal point and grabbed a goal and assist against the Bavarians, making it three direct goal contributions in his last two outings and our one to watch.

The Swede is set to be in a more familiar role as an advanced wide creator and will have fellow creator Dani Olmo on the other side of striker Yussuf Poulsen; the latter of whom scored and assisted himself in the dramatic win on matchday five.

The towering Danish striker has the best minutes per-goal ratio of anyone in Nagelsmann’s squad this season, helping fill the Timo Werner-shaped hole.

Poulsen’s 0.69 goal-per-game sees him averaging 131 minutes between strikes, with Forsberg and Sabitzer the next-best with 189 and 191 respectively.

Christopher Nkunku also is an option almost anywhere and the versatile 23-year-old has scored in his last two Bundesliga matches, as he aims to replicate his 18 goal contributions last term.

The Frenchman’s 2.31 key passes per-90 show his creative industry, always wanting to be involved in attacking moves and effectively linking up.

Justin Kluivert, who played with fellow Dutchman Donny van de Beek at Ajax from 2016 to 2018, is another option and can play anywhere across the forward line, having also scored his first goal for his new employers on Saturday.

As ever, Leipzig will play as a unit and take the game to the opposition, using meticulous tactics and counter-pressing to try and hurt United.

Although the Red Devils put five past them in Manchester, no team has conceded fewer goals in their domestic division than Die Roten Bullen.

Their expected statistics aren’t too far off their actual tallies either, and the matchday two meeting is further proven as an anomaly in that Nagelsmann’s team have scored in 90% of their fixtures this term, scoring first in 70% of them.

The suave 33-year-old boss spoke to reporters in Leipzig yesterday and revealed what he thought of his side’s display in the aforementioned 5-0 fixture.

“We were a little too afraid at the start, we can add a lot and improve, especially in the final third we can do a lot better,” said Nagelsmann.

“They defended really well but we can’t say they played really well. We have to create and search for our opportunities.”

“We are aware that we are facing United. If they are trailing, they can turn around the match, they can still win matches. They’ve shown that in the last matches, even after going behind, so we have to wait until the referee ends the match actually. We have to fight until the very end to get the three points.” – Julian Nagelsmann

A fifth successive away win coming from behind in the Premier League at West Ham on Saturday saw United jump into the top four, temporarily, following a first half to forget.

The manager, joined Harry Maguire in his pre-match press conference, was asked about the comeback spirit, and explained: “It’s all got to do with that belief.

“I don’t know how many times we’ve come back and how many goals we’ve scored in the last 10/15 minutes, but it’s a lot,” continued Solskjær.

“That’s a big difference from last season. We spoke about it at the start of the season that we needed to get those extra points that can give us. This season, that has proved very important so far.”

The skipper followed up his gaffer’s comments by saying: “You speak about the belief in turning games around when we’re going one goal down.

“It shows great belief and character. I think it’s really important as a defender that we don’t make mistakes to concede the goals and get done on the counter-attack.,” Maguire said.

“I think it’s important that we give our forwards the best possibility and the opportunity to turn the game around and they’ve done it really well in recent games.”

One point would be enough to make it through but a win with a PSG slip-up would mean Solskjær’s side top the group which would be helpful at the round-of-16 stage.

It could also be a season-defining week for the Red Devils as City come across town at the weekend for the Derby.

David de Gea has travelled to Germany after Dean Henderson replaced him in the capital on Saturday, but starters Edinson Cavani and Anthony Martial have not.

The latter attacking pair were both taken off against the Hammers, and their ‘little niggles’ have been enough to keep them from flying over.

With Fred suspended, Pogba could play from the off, like he did so well in the aforementioned October 5-0.

However, last night, agent Mino Raiola dropped a bombshell via Tuttosport, revealing: “I can say that it’s over for Paul Pogba at Manchester United.”

That puts his place in doubt and you can read more about the very conveniently-timed news here.

In more positive news about players who seemingly want to be at United, Luke Shaw has recovered from a hamstring issue to be included in the squad.

That means Solskjær may opt to match the Bundesliga outfit’s potential switch to a three-man defence but is still expected to stick with a diamond system which previously worked a treat against Leipzig.

Other academy goalscorers Greenwood and Rashford should start as a front two, with plenty of creativity behind them to feed off, and are ideal for counter-attacks with Die Roten Bullen’s insistence on committing men.

At Old Trafford in October, Rashford benefitted from that strategy as a second half substitute, to score a hat-trick against Nagelsmann’s side and Greenwood also opened the scoring with another smart finish.

Eric Bailly, Jesse Lingard and Axel Tuanzebe are back available and in the 23-man squad, along with Odion Ighalo, who seems to be a forgotten man but might be considered with five substitutes permitted in Europe’s elite competition.

Lingard, rumoured to be on the move in January, played the full 90 minutes the last time United went to Germany in the Champions League, for a similar group stage situation.

In 2016, the Red Devils needed a win or benefit from other results to go through, but Louis van Gaal’s men fell into the Europa League due to a dismal 3-2 loss.

“You have got to approach the game [like] anything can happen. You can’t sit back and hope for a 0-0 draw. That is not in our genes. We showed vs PSG we wanted to win, we will do it again.” – Ole Gunnar Solskjær