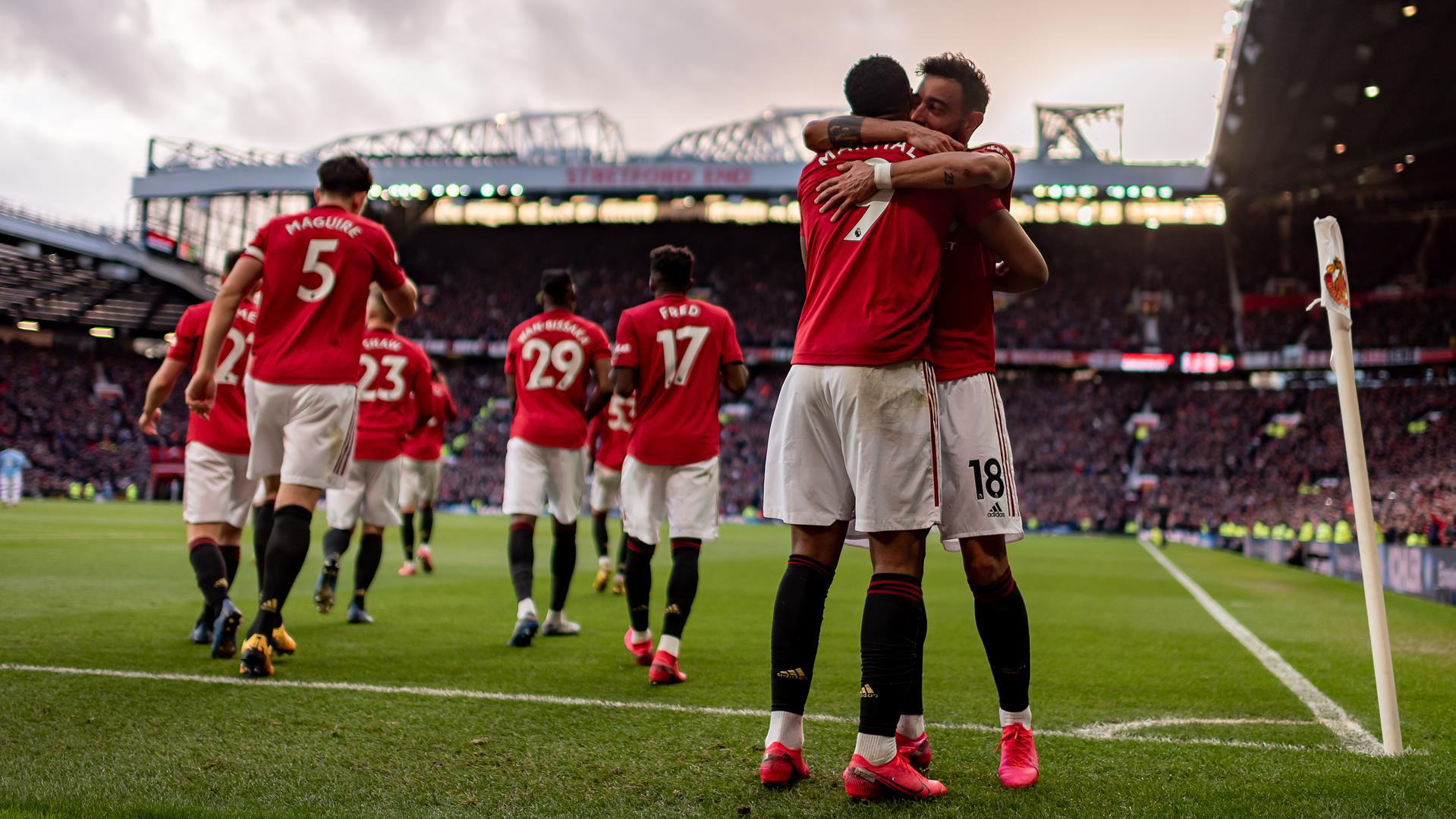 United have the chance to bounce back from Champions League failure tomorrow in the 183rd Manchester Derby against rivals City.

Ole Gunnar Solskjær’s side sit one point and one place above Pep Guardiola’s men, following faltering starts to the Premier League season from the powerhouse pair.

The final fixture to be played in front of fans at the Theatre of Dreams will be played out with no Mancunians in the stands.

No longer champions, City have reset this season in search of reclaiming the title and finally getting their hands on the allusive Champions League.

Guardiola was given the cash to sign even more defensive reinforcements and attacking talent, which took a while to click, but it seems the Citizens are nearing being back at their best.

Unbeaten in five since a loss at Tottenham Hotspur and a disappointing draw at home to Liverpool, the noisy neighbours have scored 11 goals and not conceded.

Expected points (calculated by expected goals) sees them third in the table, indicating how Guardiola’s side have been slightly unfortunate not to be very near the summit as it stands.

However, their ascent is ongoing and a shrinking injury list is helping things, allowing the Spanish boss to make 10 changes to his starting XI from the win over Fulham last week to against Marseille on Wednesday.

With top players producing and the rear guard becoming more stable, it’s feeling a lot more positive on the blue side of the city than a few months ago but they won’t be happy until they’re the dominant team in the whole of the land again.

One to watch: Gabriel Jesus

One wouldn’t drastically change a team which has won six of the last nine domestic trophies because of a difficult 12 months, but Guardiola has tinkered to try and improve his previously all-conquering outfit.

Firstly, the Citizens now operate with two defensive-minded midfielders to protect the back line and give a firmer platform for their forwards to flourish.

Fernandinho and Rodri sit in a double pivot but that isn’t the sole reason why their defence is looking more solid this season.

João Cancelo, who spent a lot of time adjusting to a new division last term, is loving life at life-back and Kyle Walker is having a renaissance on the right-hand side.

Portuguese Dias had a rash reputation back home in Liga NOS but has been an assured presence at the Etihad, seeing just six goals go past him during his 12 games in all competitions this campaign.

To back his impact up, City have shipped a joint league-best 11 strikes so far and conceded just one goal in their UCL group run – another joint record – the best of an English side since the Red Devils did it in 2010.

Moving forward, De Bruyne and Sterling are still producing an elite-level output whilet Gabriel Jesus has had an extended run as the main man up front in Sergio Agüero’s absence.

However, he hasn’t been the only one, with £20m bargain Ferran Torres taking the spot up top on multiple occasions and showing his promise, scoring six goals in 14 appearances from various positions.

Their attack is supplemented by Phil Foden’s development and numerous academy products being involved in matchday squads.

Agüero returned and scored upon his return in midweek but Guardiola says there is ‘no chance’ he’ll start this one.

The Argentine hitman has scored nine goals in 16 appearances against United and can make an impact from the bench if he’s needed.

City will be hoping they don’t need to turn to him and repeat their performance in the second of last season’s four meetings – the only one which they won – when their press destroyed the Red Devils in the first leg of a Carabao Cup semi-final.

The Citizens’ press is still dangerous; winning the ball back in the final third more than any other side in the top-flight this season (55) even though they average the highest possession with 63.6%.

With the chance to move above their rivals and back into the top four for at least for 24 hours, one would expect Guardiola’s team to be right at it.

“It is not a knockout game, it is three more points, That is important, of course, for the quality of the opponent, but there are a lot of fixtures to come and we will try to win our games.” – Pep Guardiola

Back in the Europa League and back down to Earth, Solskjær is under serious pressure again.

Reports of the club backing him but players being skeptical has left the situation murky after the loss against Leipzig.

Nevertheless, there’s nothing unclear about this game.

United require a response and have often done so when their boss needs a result but like the comebacks, that trend will eventually halt if the team doesn’t improve and stop getting into the same predicaments, time after time in a repetitive cycle.

Given that the Norwegian manager switched shape at half-time on Tuesday, a 3-5-2 isn’t expected to be chosen – although it was successful against the Citizens last season.

David de Gea’s failure to stop the fatal third goal in Germany added the clamour for Dean Henderson to be given a run as first-choice but Solskjær is expected to stick with the Spaniard.

In his pre-match press conference, the boss said: “David’s a top goalkeeper and rightly on the lists of best goalkeeper in Europe, he’s handled criticism and setbacks before.

“He’s a man that we really rely on and hopefully he’s not affected by criticism and I don’t think he will be.”

Despite Luke Shaw struggling on his return to the team, his defence qualities are more proven than Alex Telles and Brandon Williams’, meaning he get the nod at left-back.

Fred was rested last weekend at West Ham, so should also start along Scott McTominay, whose goal in March against City wrapped up a 2-0 win at Old Trafford and sent the crowd in delirium.

Paul Pogba could play after his impact in Leipzig amid speculation he wants to leave in January, as is Donny van de Beek, but those two are unlikely to start unless they occupy different roles to usual.

Fresh from winning the Premier League’s Player of the Month award for November, Bruno Fernandes will face-off against De Bruyne in a battle of two of the top-flights finest playmakers.

He’ll be hoping to provide Anthony Martial with service like he did for the first goal at Old Trafford in March – a quick free-kick – as the Frenchman is fit again.

History is also in the Red Devils’ favour in one respect, as Solskjær boasts the best points-per-game record of any manager to have faced Guardiola more than three times, with 1.8 from the pair’s five meetings.

“I feel we are getting better and better and looking more like the Manchester United team I want. We have fast, dynamic attackers and good players with individual qualities. Everyone says we don’t have consistency but we have won the last four in the league, so hopefully we can carry that on.” – Ole Gunnar Solskjær