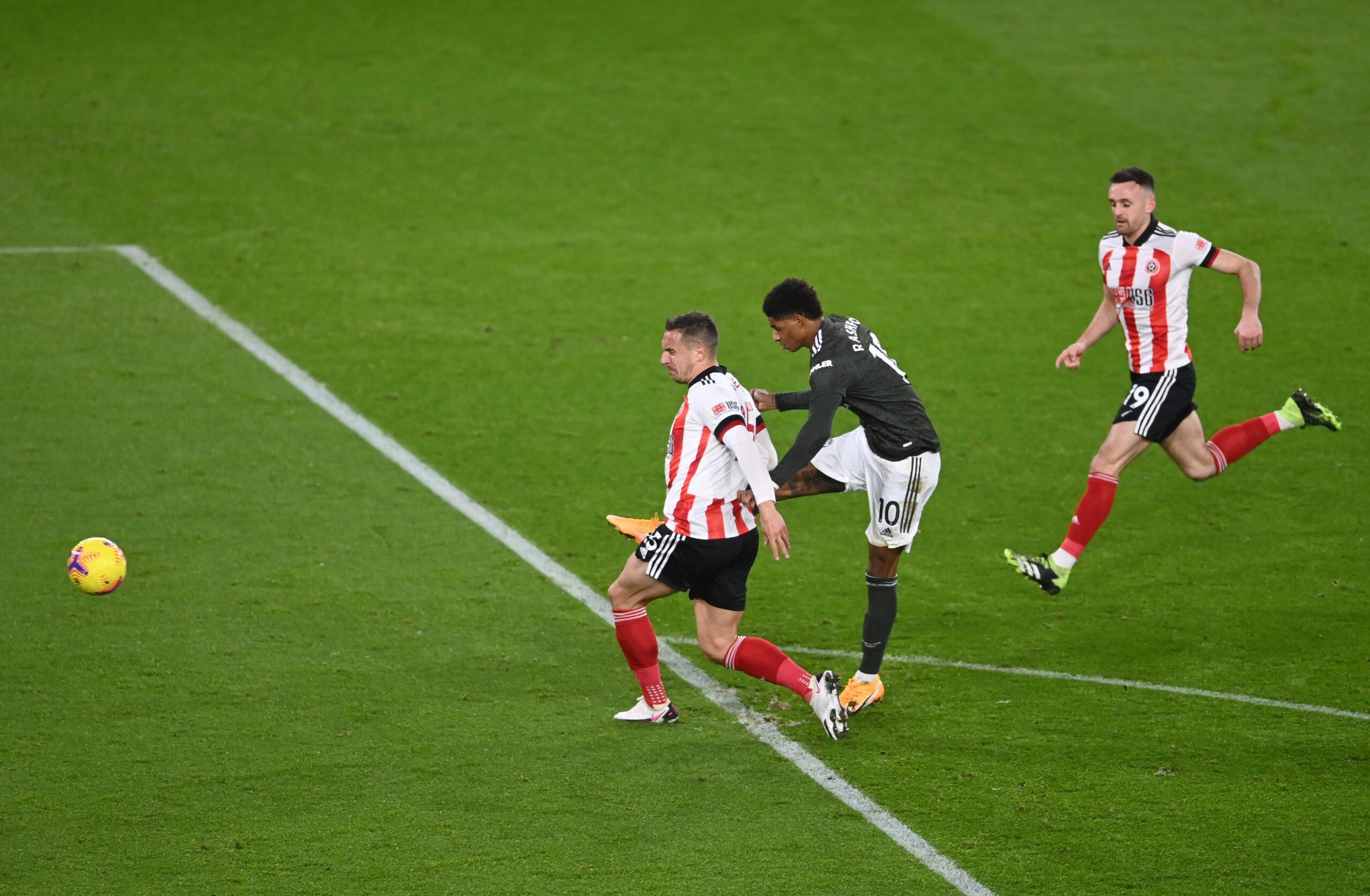 That was way too close for comfort in the end, but Manchester United did pick up a huge three points at Bramall Lane in their first Thursday night fixture of the season.

After going behind early, as per usual, United woke up quicker this time and began to chip away at the leaky Sheffield United defense from all angles.

A brace from Marcus Rashford and the first Premier League goal of the season for Anthony Martial looked to have the Reds all but home and dry half way into the second half, but a late consolation from the hosts provided a few unnecessarily quick beats of every fans heart.

Ole Gunnar Solskjaer’s side did go on to secure their tenth consecutive away win in the Premier League though and a few impressive individual performances have the Reds looking in good shape for a charge at the top of the table in the coming weeks.

Dean Henderson – 5.5
A rather shaky return to his old stomping grounds for the United academy graduate. A big mistake for the hosts first caused the resting David de Gea to feel a little uneasy in the stands.

Aaron Wan-Bissaka – 6.5
The right-back didn’t have a whole lot to do defensively and didn’t contribute too much going forward. But when called upon, he was solid.

Harry Maguire – 6
His unnecessary pass back into Henderson’s feet contributed to United going behind early. Otherwise a solid effort in keeping the hosts physical forwards quiet.

Victor Lindelof – 7
Another solid performance for the Swede who is looking more assured with every week. His fantastic over the top through ball tee’d up Marcus Rashford for United’s equalizer.

Alex Telles – 6
It wasn’t a bad performance, but United’s left hand side certainly looked the weakest defensively. A few poor ball giveaways in the first half too contributed to a lower score.

Nemanja Matic – 7
This kind of Matic is what United desperately need. Very assured and composed in controlling the midfield from just in front of the back line and solid at progressing the ball forward.

Paul Pogba – 8
There were a couple of silly giveaways here and there, but overall, an excellent display from the Frenchman. He was poised and extremely creative from deep for the Reds, contributing massively to two goals (one assist).

Mason Greenwood – 6
A quieter night for United’s designated right attacker. Not too many chances fell to him but he did play a big part in the Reds third goal, drawing a defender out onto the half way line on the counter.

Bruno Fernandes – 8
Bruno didn’t have a goal contribution away from home for the first time ever as a United player, but that doesn’t tell the whole story. Every thing good for United went through the legs of the Portuguese midfielder.

Marcus Rashford – 8.5
A bit of a frustrating performance at times, but very decisive in front of goal and it shows with a brace to his name. Fantastic finish for his first and a bit of luck for the second, but you’ll take those as a forward all day.

Anthony Martial – 7
Finally, the French No. 9 gets his first league goal. An excellent run to latch onto a great ball from his compatriot Pogba and a scrappy but much needed finish to put United 2-1 up. That’ll be huge for his confidence in front of goal to go along with the already solid link up play.

Substitutes were all tactical and came on too late to make an impact worth rating.
Juan Mata
Donny van de Beek
Scott McTominay