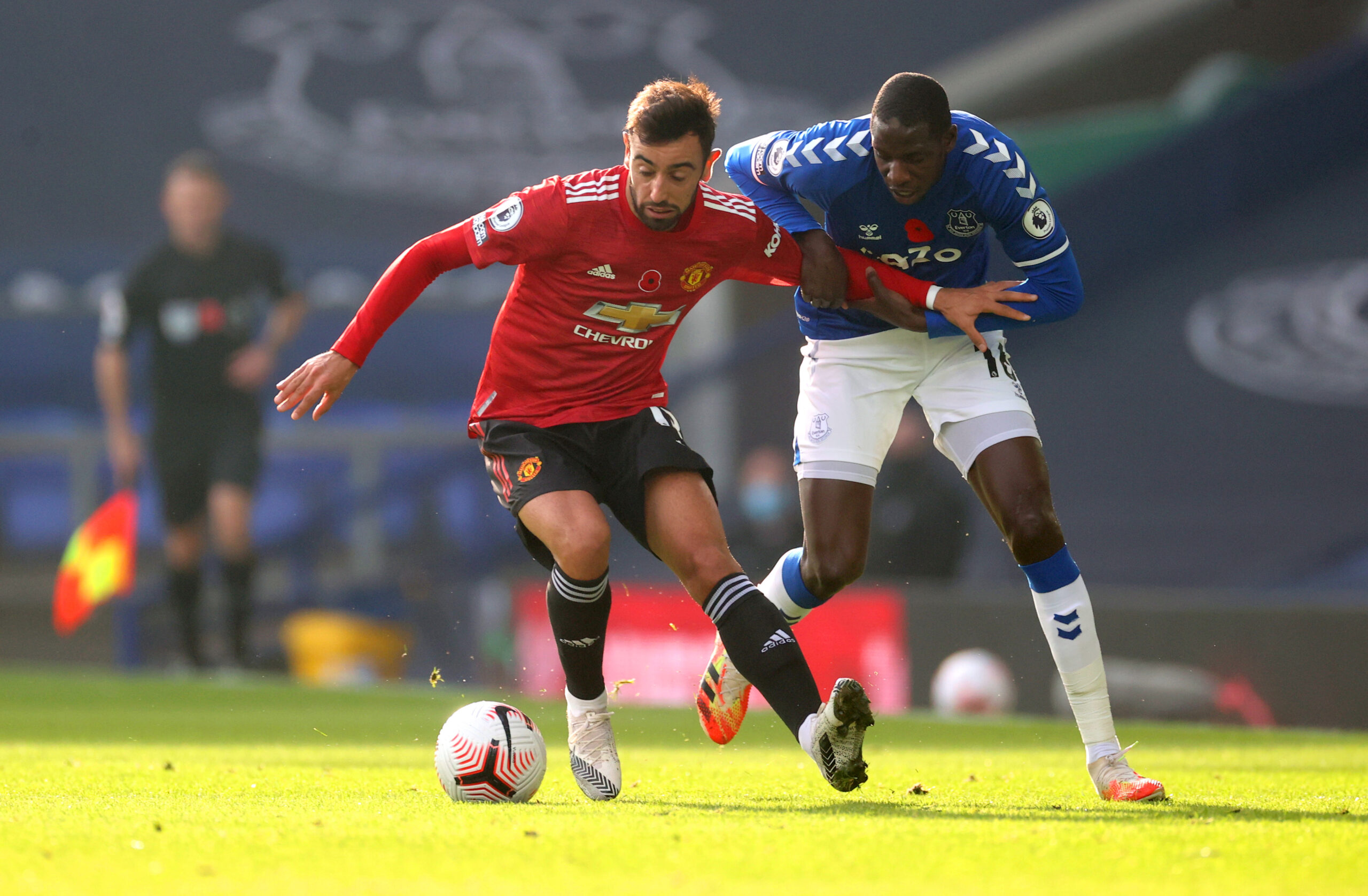 United are on Merseyside on Wednesday for a Carabao Cup quarter-final clash with Everton.

Ole Gunnar Solskjær’s team has already had success in the blue part of Liverpool this season, beating Carlo Ancelotti’s men just over six weeks ago in a 3-1 comeback victory.

Now, though, it’s a different ball game for place in the final four and the chance to earn some much-need silverware on both side.

Having had a dream start to the season barring a blip around the time these teams last met, Everton are flying high in the league and will no-doubt even have silverware in sight.

Another dream come true for Evertonians has been their return to Goodison Park, as mass Covid-19 testing in Liverpool has resulted in themselves and the red side of the city being the only Premier League clubs being able to admit spectators under current restrictions.

That’s helped their form, too, beating Chelsea and Arsenal in their two home games with fans so far, sandwiching an impressive win at Leicester last midweek.

Ancelotti celebrated his first anniversary as manager on Monday and a deep run into a cup competition like this would top off an impressive first year.

One to watch: Richarlison

Round to the round

It’s often the case that when teams perform above expectations at the Premier League campaign, their form in cup competitions suffers.

However, they’ve hit it off in the Carabao Cup and various fringe players have been behind the run.

Jordan Pickford has played the two most recent rounds but back-up Robin Olsen is pushing him for the nod between the posts, with the towering Swede keeping a clean sheet last week at the King Power.

French left-back Niels Nkounkou is one of the flying fledgings in the Carabao Cup and could replace unnatural full-back Ben Godfrey for this match, as the latter shifts to the centre following some admirable deputising of the injured Lucas Digne.

Having conceded one goal in their last three matches, though, Ancelotti may not want to disrupt the form of Mason Holgate, Mina and Red Devil academy product Michael Keane.

On the right-hand side, club captain Séamus Coleman is available again, playing the last seven minutes on Saturday after he picked an injury when these sides met in November.

In midfield, Tom Davies is back in the mix and is expected to be involved in some capacity while the rejuvenated Sigurðsson is shining in star man Rodríguez’s absence.

The majority of Everton’s injury concerns are in the centre of the park, with destroyer Allan (who is a doubt for tomorrow) being key to the Toffee’s third-best successful tackle tally per-game in the top-flight (10.6).

Strong as they are at the back and in the base, going forward is where Everton have shone this season.

Calvert-Lewin hasn’t scored in winning but is still contributing, while the inconsistent Richarlison has two direct goal contributions in his last four outings.

The Brazilian was banned for the aforementioned fixture and not been at his best this term, but will be keen to prove his doubters wrong tomorrow.

Alex Iwobi is in favour on the right-hand flank, even impressing at wing-back in a win at Fulham last month, ending a three-game losing streak.

Youngsters Jarrad Branthwaite (centre-back) and Anthony Gordon (winger) are set to be included in the squad, having shown their quality in the time since Ancelotti arrived.

“In a good moment we are going to play against really tough opponents who beat us a few weeks ago here. It is a great opportunity to show the momentum.” – Carlo Ancelotti

Sunday was a statement from United, who walloped Leeds 6-2 at a sadly empty Old Trafford.

Scott McTomiany’s very early brace preceded and superb display from the rest of his teammates in the eight-goal thriller as the Red Devils rose to 3rd place.

Solskjær’s men scored more in the game than the had in thejr previous five home games combined but now look took continue their 100% away from in all competitions – eight wins without needing extra-time or penalties at Luton (0-3) or Brighton (0-3) either.

It might go beyond the regular 90 minutes tomorrow, however, as the manager looks to make it all the way to the final this time out following three semi-finals last season.

Although his men got the aforementioned 1-3 Goodison win in one of Solskjær’s biggest games as boss so far, he’ll still have the 4-0 thrashing in April 2019 in his mind when, following the match, he vowed to be successful at his beloved club.

A man who wasn’t there then was Solskjær’s captain, Harry Maguire, who told club media yesterday: “At this club we’re expected to win trophies and we go into this game full of confidence from the result [last weekend].

“We’ve got to start winning trophies, we haven’t won in the last two or three years now and it’s important. It’s an important competition for ourselves to build momentum and confidence. It’s an important game and we’re going into it to try and win the game.”

Despite his emphatic display, McTominay is a doubt due to leaving the pitch late on Sunday with a groin injury.

Luke Shaw is also a concern after he struggled through illness to play an hour against the Peacocks from over the Pennines.

That means Nemanja Matić and Alex Telles should replace the pair respectively.

Edinson Cavani could lead the line after he netted his first goal for the club at Goodison in November while Greenwood and Juan Mata may also feature if Solskjær rotates.

Greenwood is fit enough to feature according to his manager, who also spoke about Jesse Lingard returning to the squad tomorrow, saying: “Jesse will be in the squad, yeah. He’s been working hard in training.

“He’s been unfortunate with having to isolate a few times, been in contact, or close contact with Covid, not even having it himself.”

Daniel James would be unfortunate to lose his place after defying the critics by putting in a productive display against the gung ho Leeds.

David De Gea is expected to keep his place in goal, following Dean Henderson’s error last week at Sheffield United and Solskjær’s consistent faith in his number one.

Bruno Fernandes and Marcus Rashford were withdrawn early on Sunday, so should start.

The Portuguese midfielder has three goals in his two visits to Merseyside, although Fernandes’ third was almost given as Rashford’s in a marginal call after the England striker appeared to get a touch on the ball at first glance.

Finally, in a bid to have fans watching the match, the Wembley-hosted final has been pushed back two months from February28 to April 25.