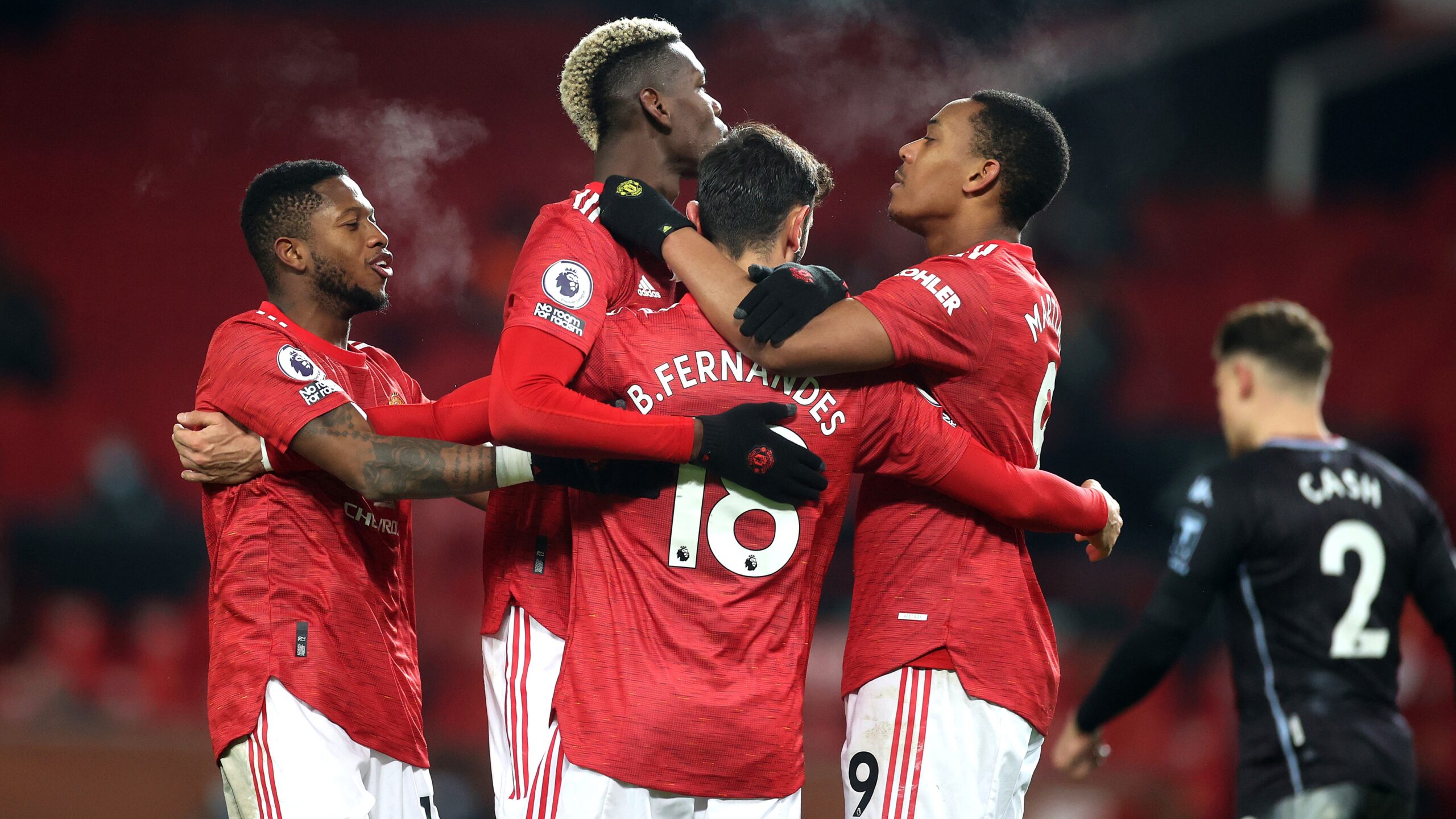 Manchester United moved level on points with Liverpool at the top of the Premier League table after grinding out a 2-1 victory over a resilient Aston Villa. Goals from Anthony Martial and Bruno Fernandes ensured the Red Devils gained a crucial three points at Old Trafford.

United started brightly in the first half, notably down the left-hand side, with Fernandes testing Emi Martinez at his near post with a fizzing shot, which was smartly saved.

Anthony Martial had United’s first clear opportunity at goal, cutting onto his right foot to shoot straight at Villa’s keeper.

During the opening 15 minutes, United’s quick and intricate passing was obvious to see, looking creative in the final third. Despite Bruno Fernandes occupying the central attacking midfielder position, the Portuguese International was drifting to the left and ride of United’s flanks, utilising his abilities of dominating in a free role.

John McGinn had Aston Villa’s first effort on goal after connecting well from a cross by Matty Cash. Caressing the volley, his shot was smartly saved by David de Gea at his near post.

Villa gradually grew into the game and looked a real threat going forward. Starlet Jack Grealish, who has been heavily linked with a move to Old Trafford, was looking like the most dominant threat when the team from Birmingham were in possession. Fred and Scott McTominay were acting like stalkers, following around the England International, knowing the dangers he possesses.

Chances were continuously being created, where Villa were dominating the ball after the 20-minute mark. However, Solskjaer’s team have developed a reputation for being frightening on the counterattack, and whilst Dean Smith’s side saw a lot of the ball, United looked a threat on the break. Matty Cash was seen to be out of position when bombing forward for attacks, leaving space open for United to exploit.

Similar to the roles of Fred and McTominay, it was clear McGinn and Douglas Ruiz were doubling up in marking Fernandes, who was followed by either wherever he went. This initially made it extremely difficult for United’s talisman to grow into the game. His first real sight on goal came in the 36th minute, but his scuffed effort went wide of the net.

Manchester United got their goal out of nowhere, where Aaron Wan-Bissaka found Anthony Martial with a brilliant cross on the break. The Frenchman brilliantly pulled off Tyrone Mings, his marker, before glancing a header past Martinez with sensational movement inside the 18-yard box.

The first opportunity in the second half came for Villa, where danger man Grealish picked out a cross to find his striking teammate, Ollie Watkins. Shooting on target, his header brought out a wonderful acrobatic save by De Gea to keep United ahead in the game.

Villa had another effort straight away, Anwar El-Ghazi shot a fierce effort just over the bar, sending danger signs to United’s defence.

United’s first effort on target during the second period lied in the feet of Marcus Rashford, who dribbled past four Villa players to shoot straight at Martinez.

The slow pace of united at the beginning of the half proved costly. Villa found themselves level after being the brighter team at the start of the second period. Aaron Wan-Bissaka had a moment of madness, not tracking back after giving away a silly foul and marking Jack Grealish. Free at the back post, Bertrand Traore had time to pick his spot to bring Villa level.

Immediately after, United were awarded a penalty. Douglas Luiz clearly brought down Paul Pogba towards the left-hand side of the penalty area. United’s main kick taker, Bruno Fernandes, confidently stood up and fired the ball hard and low into the bottom left hand corner of the net. His 15th goal of the season put his team into a crucial lead once more.

Despite the Lions dominating the ball, United continued to look threatening on the break, holding more firepower in attack as opposed to the claret and blue side. Every time Solskjaer’s side got the ball in offensive areas, you could sense danger in the final third, where they sprung to life.

The game began to open up at around the 60-minute mark, both teams were creating numerous opportunities to score. Down United’s left-hand side, Matty Cash was beginning to show signs of tiredness, highlighted through Luke Shaw and Anthony Martial finding space in behind.

As the game drew nearer and nearer to the end, United shifted into another gear to try and see the visitors off, playing some beautiful football in the offensive areas. Chances were coming at a frequent pace for The Red Devils, but only one goal separated the two teams.

Paul Pogba had a glorious opportunity to finish the game in United’s favour after a brilliant move once again down the left-hand channel. Luke Shaw put in a wicked ball, which found the French International, but his shot was put just wide off the post.

Bruno Fernandes fiercely struck a powerful effort from 25 yards out, to force yet another fantastic save out of Emi Martinez, who tipped it onto the post and out for a United corner.

Tyrone Mings had a wonderful chance to bring Villa level once again, but his header was just narrow of the post, squandering a great chance for Villa to snatch a point.

In the dying minutes of the game, Villa were putting hefty amounts of pressure on the United goal, but Solskjaer’s team defended resiliently, foreshadowed by a goal-winning block in the 94th Minute by Eric Bailly. As the final whistle drew to a close, everyone hugged the Ivorian, portraying how much the victory meant to the squad.

The result leaves United level on points with Liverpool at the top of the table, who face a tough away game against Southampton. Clearly, United are making massive progress under Ole Gunnar Solskjaer and if this form keeps going, no one will be able to predict where this side will finish come the end of the season.