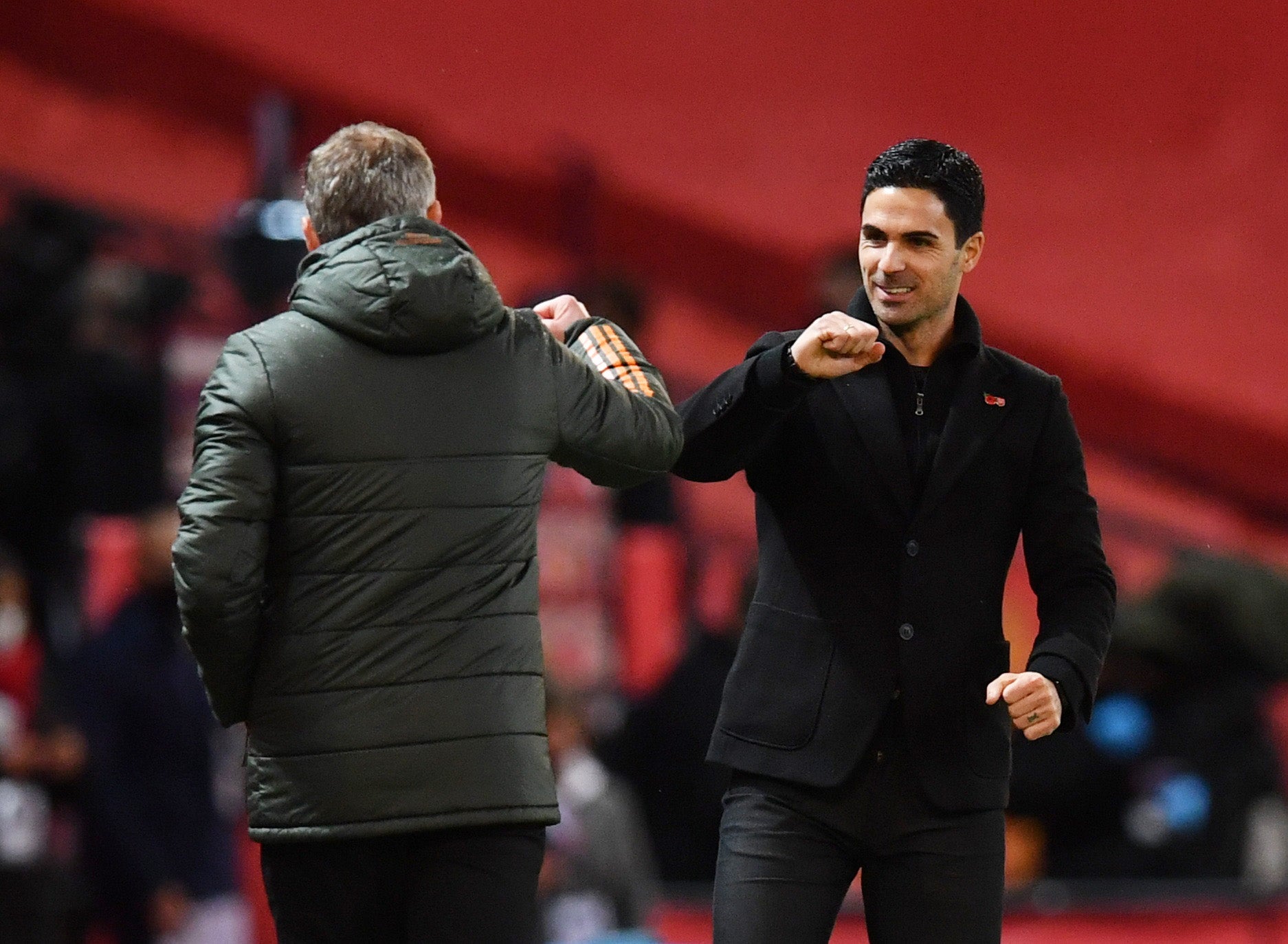 United travel to Arsenal today as they look to make up lost ground on the title race.

Ole Gunnar Solskjær’s side suffered an embarrassing defeat midweek, while Mikel Arteta & co have got somewhat their act together in 2021 and are on a roll.

The Red Devils require a response on the road.

Although enjoying a spell out of crisis, Arsenal are still Arsenal.

Even after Arteta’s terrific turnaround last season, the men from North London remain as frustrating for fans as ever – partially because of how good them can be.

Having gone seven league games without a win after a triumph at Old Trafford, with the usual meltdown ensuring, things are now looking up for the capital club, with five victories from six outings since a shock Boxing Day beating of Chelsea.

Gaining ground in the top four face, the Gunners sit seven points behind 4th-placed Liverpool before this gameweek begins.

Arteta’s men come in this off the back of two consecutive away encounters with Southampton, losing the FA Cup match last Saturday and winning on Tuesday.

Now, they’re hoping to beat United in the Premier League at the Emirates for the third season in a row.

One to watch: Bukayo Saka

Having only scored just 12 goals in 14 games prior to their improvement, Arsenal now look a much more functional outfit after previously under pressure Arteta fell upon a favoured side.

Rob Holding and David Luiz have started the last three league games together in the rear guard keeping summer signing Gabriel out, while vice-captain Hector Bellerín is a mainstay at right-back.

Left-back Kieran Tierney was hitting some fantastic form before he picked up an injury, which has kept him out for the trips to St Mary’s, with Cédric Soares deputising.

However, the Scot, one of three calf issue in the camp, was back in training today along with the doubtful Thomas Partey, who picked up a late knock in the week.

The Ghanaian midfielder ran the reverse fixture against the Red Devils but missed most of their dismal run before Christmas, and had become a key element in the heart of the Gunners’ solid,. albeit dull, holding midfield.

If he plays, he’ll likely be partnered with Granit Xhaka, who scored in this fixture in 2019, while Mohamed Elneny is a more defensive option.

Fellow midfielder-attacker Saka is our one to watch, having contributed to nine goals this campaign to truly burst into the scene.

The versatile left-sided teenager has racked up more minutes than any other Arsenal outfielder this campaign, having broke through last term with his talent and astute attitude helping him shine.

Smith Rowe has joined him in making a name for himself this year, becoming a crucial creative force in a matter of weeks, with two goals and five assists in just 11 games, in which he has a averaged 1.88 key passes per-90 minutes.

Their attack has seen some much-needed bolstering this week, too.

Playmaker Martin Ødegaard arrived on loan from Real Madrid on Wednesday and could potentially make his Premier League bow this evening.

The no. 11 is a creative force like Saka and Smith Rowe, making more key passes (60) and progressive ones (203) than any of the Gunners’ squad in 2019/20 while on loan at Real Sociedad – United’s Europa League round-of-32 opponents.

Solskjær was asked by reporters yesterday about his fellow Norwiegan, saying: “Martin is a very talented young player and we know from the national team that he can cause any team problems.

“I just hope he’s not finding his form on Saturday,” he joked.

“I wish him all the best, he’s a good boy, good attitude, right character, so I’m sure they’ve made a good signing there.”

Someone who’s been at the club for much longer is Aubameyang, who missed both journeys to the south coast for personal reasons and scored the only goal of the game in November from the penalty spot.

The club captain is having a ‘difficult time’ according to Arteta, and the Gabon hitman is set to miss the match.

That means leading marksman Alexandre Lacazette is set to start after scoring on Tuesday.

Continuing, 32-year-old Willian has failed to make a real impact, while the still stuttering Nicolas Pépé netted his 14th goal in 69 games for the Gunners in midweek.

The Ivorian opened the scoring in last season’s meeting at the Emirates and should start on the left flank but is interchangeable with Saka and Smith Rowe in a fluid forward line behind Lacazette.

Brazilian starlet Gabriel Martinelli is also available but is yet to score in six appearances since recovering from injury earlier this season.

Statistically, Arsenal are right where they should be – at least according to expected points.

The Gunners harbour an 1.9 expected goals scored deficit but rank as the fourth-lowest side when it comes to shipping them, with just 22.37 to their commendable 20 in reality.

Arteta & co have managed to claw themselves back into the mix and are on track for a better second half of the season.

“They have the capacity and the quality to beat any side in the world. We know we’re going to have to be at our best because the demands of these games are huge. We need to be better than what we were on Tuesday again to beat them and that’s the way we’re going to prepare.” – Mikel Arteta

The comeback kings’ crown fell on Wednesday, as United conceded a goal each side of a Harry Maguire equaliser to slump to a shocking loss against bottom of the league Sheffield United.

That abysmal display ended a 13-game top-flight unbeaten run and it was the sixth loss an empty Old Trafford has suffered this season.

However, what was truly sad about the result, was that it lead to Anthony Martial and Axel Tuanzebe suffering vile racist abuse on social media from so-called supporters, which club captain Maguire condemned on Thursday.

In his pre-match press conference, Solskjær did the same before moving onto some more tactical points, asked by United We Stand editor and accomplished journalist Andy Mitten about his side’s defensive record, having conceded the most goals in the division’s top 11 teams (27).

“Of course, we are getting goals at one end and sometimes you open up at the other end. But, we’ve been consistently scoring more than conceding,” explained the boss.

“But you’d rather win 3-0 than 3-2 as well, so we’re working on the press high up, we defend as a team. I think we’ve got better and better over the year.

“Let’s hope we can be a compact unit against Arsenal as well.”

And now we’re taking a look at who could be in that unit.

Eric Bailly has missed the last two matches but is ‘fine’ according to Solskjær, who said the same of Martial following his knock to the shoulder early on Wednesday.

However, Victor Lindelöf is likely to slot back into the back line, replacing Tuanzebe, while Luke Shaw is likely to usurp Alex Telles.

Both Fred and Scott McTominay should return as a midfield double pivot, having not started together since the trip to Anfield.

Their energy is consistently key in big games, with McTominay’s four goals already matching his tally from last term, while Fred’s creative output has dropped.

The tenacious midfielder is completing fewer key passes per-game than in his previous two campaigns at the club, although was defensively excellent at Fulham in the Red Devils’ last trip to London.

Edinson Cavani is expected to retake his spot leading the line, with Martial quite possibly losing his place following a shocking showing on Wednesday.

On Martial’s form – five goals in 25 games this term – his manager said yesterday: “Yes, he’s missed a couple of chances, that happens to everyone.

“It’s just being ready, for example tomorrow, when the [next] chance comes,” he explained.

“He keeps practising in training and he keeps doing it here, so we know how good he is and we know he’ll come good.”

Marcus Rashford will be hoping for a return to the left-wing with a true no. 9 ahead of him, while Mason Greenwood might have to make do with a start from the bench as Bruno Fernandes and Paul Pogba take their advanced places.

Amad Diallo will make his U23s bow this afternoon against Liverpool, while Facundo Pellistri is set to leave for La Liga outfit Alavés on loan.

Jesse Lingard had also linked up with David Moyes’ West Ham on loan until the end of the season, with Marcos Rojo soon set to leave the club permanently by returning to Argentina and joining Boca Juniors – although he has already been there for a few weeks enjoying barbecues.

One man sticking around is Daniel James, whose pace could work against the high-pressing Gunners and a start wouldn’t be out of the question.

He would be part of the first Red Devils team to claim three points at the Emirates in over three years, losing 2-0 on the last two league occasions following an FA Cup victory January 2019.

For the first time after the reverse fixture defeat, Solskjær’s side need to bounce back from a loss in the Premier League.

“Of course, we go into this game expecting the best possible Arsenal and hopefully they’ll also be prepared for the worst possible Man United. It’s always been good games, top games. In that game, we have to be honest enough to say we didn’t play well enough. It could be the same, they could man mark our players like they did in that game. One of the things you have to do is prepare for every eventuality.” – Ole Gunnar Solskjær