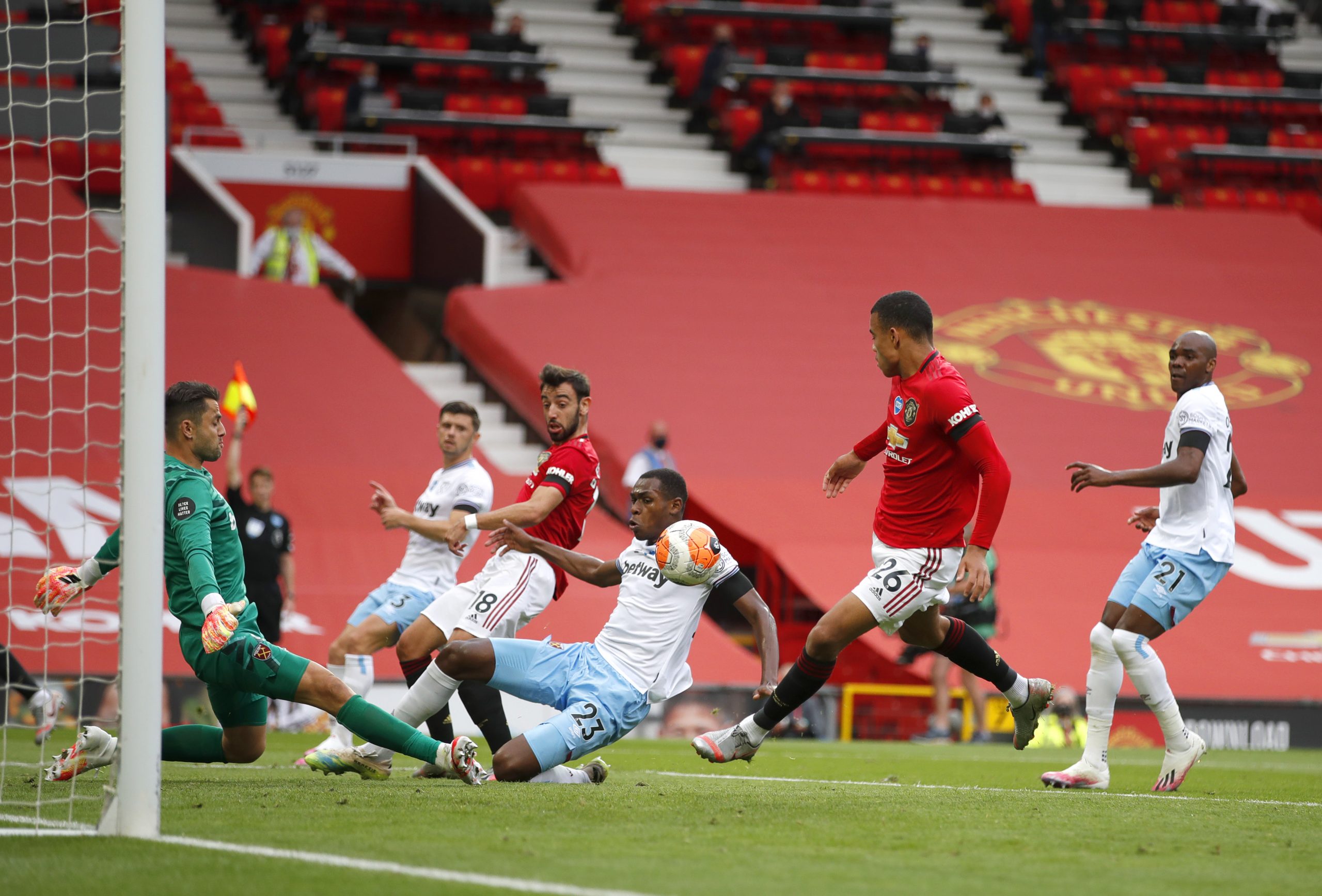 Ole Gunnar Solskjaer will welcome David Moyes back to the Threatre of Dreams for the second time, with both sides having had better seasons than expected so far.

Looking to advance to round six for the seventh successive FA Cup campaign, the Red Devils need to bounce back from weekend woes.

Having only survived the drop on the penultimate gameweek last term, West Ham have been taken to heights which they haven’t reached since moving to the London Stadium in 2016.

Coincidentally, the is the best season that the East End club have had since 2015/16, in which they met United in the quarter-final, earning a draw at the Theatre of Dreams before being beaten in one of the Boleyn Ground’s final games.

Credit must go to Moyes, who has proved his doubters wrong in just over a year by molding this team much to be like his original Everton outfit, which won him the Old Trafford hot seat in 2013 – albeit for eight months.

2021 is a world away from those days, though, and the Irons sit 5th in the table after 23 fixtures with the aim of upsetting the ‘Big Six’ apple cart.

Following a difficult start the season, the now tough-to-beat side have turned things around and have won seven of their nine matches this calendar year, just as many predicted them to fall off.

Their only draw of 2021 came this weekend, in which top goalscorer Tomáš Souček was sent off late on to further sour a slightly frustrating trip across London.

Statistically, their formidable form doesn’t seem to be a fluke, sitting 8th in the expected points table and boasting a similar xG to reality in the Premier League.

This is cup football, though, and after seeing off a pair of lower-ranked teams in their two earlier rounds will want to truly test themselves against a big dog.

Their loss to Liverpool 10 days showed that there’s still work to be done, but with the addition of Jesse Lingard and renewed confidence within their deeply-devoted fan base, underestimate Moyes’s men at your peril.

One to watch: Michail Antonio

Round to the round

Having employed a 3-4-2-1 formation at the beginning of the campaign, Moyes made the switch to a 4-2-3-1 shape this month as his side look to control more of the ball and be less conservative in their approach.

With Darren Randolph injured, the Scottish manager is expected to stick with his first-choice Pole in goal, Lukasz Fabiański unless he fancies giving boyhood Hammer David Martin a chance.

Right-back Ryan Fredericks is set to get the nod over Vladimír Coufal with Craig Dawson and Angelo Ogbonna at the heart of defence.

Having played second fiddle to Coufal for most of the season, Fredericks has made his mark whenever he’s had the opportunity to in the top-flight, managing 2.45 key passes per-game, calculated from his 439 minutes.

Dawson’s loan signing from Watford in the summer was met with large disapproval from supporters, but the defender has been a revelation at the back.

Complete nine of the last 10 available 90 minutes during their recent red-hot run, the 30-year-old’s efforts were rewarded last week with a Premier League January Player of the Month nomination.

Left-back Aaron Cresswell, who has a deadly delivery on him, completes the defensive unit, also playing a key part in the six games over the turn of the year which saw West Ham concede just one goal.

Moving to midfield, Souček’s controversial red card from the draw at Craven Cottage has been overturned, meaning Moyes’ main marksman will be available for selection – and rightly so.

Dubbed the new Marouane Fellaini, the Czech’s goalscoring ability largely comes from his awkward 6ft 4in frame but possesses the nouse and finishing ability to make him a true threat.

The 25-year-old is expected to continue his solid double-pivot partnership with prize asset Declan Rice, who’s expected to captain the side if Mark Noble doesn’t start.

Cresswell, Rice, and Souček are the only three players in the Irons’ squad to have played every Premier League minute so far this term.

West Ham’s 13 goals in their last six games have also displayed an attacking improvement under Moyes, using the solid aforementioned six-man base to build on with a fluid front four.

Jarrod Bowen operates primarily on the right but like the grafting Pablo Fornals, enjoys coming inside as Hammers striker Michail Antonio shifts around in the final third.

Antonio, a neutral’s fan favourite due to his down-to-Earth persona, netted at the Theatre of Dreams in July during a purple patch towards the end of last season, helping fire his side to safety.

However, he is underperforming this term, according to xG.

The 30-year-old, doubtful due to fatigue, has five goals to his name from an expected 6.83 this campaign but it’s not for the want of trying, racking up 2.99 shots per-90 minutes in the PL.

Summer signing Saïd Benrahma took a while to get going in a claret and blue shirt but is looking better each outing.

He has averages 2.23 shots every game in the top-flight as well as 1.49 key passes, similar numbers to those Benrahma attained for Brentford in the Championship in 19/20.

The Algerian trickster can also cause problems with his silky footwork and innate flair and is likely to start on the left flank with Fornals or Manuel Lanzini at 10 due to Lingard’s ineligibility.

The United loanee racked up two goals three key passes in his first duo of outings for West Ham but Moyes won’t be able to call on his energy and attacking output for this one due to being both cup-tied and ruled out due to the loan agreement.

On Lingard, his parent club manager, said: “Jesse has started really well. He’s gone down there, made a good first impression.

“He’s just got to knuckle down, work hard, keep his head down, keep improving his game.”

Having caused Solskjær and co serious issues in the first half of their sole top-flight contest this term (back in December), West Ham will know they are capable of troubling the Red Devils once more.

Having already taken Premier League points off of a few teams sitting in the top six spots this season, a scalp in the FA Cup would add to an encouraging campaign for the usually infuriating Irons.

“Overall I think we’ve competed quite well against the top teams. We’ve got a bit to go to be at that level and that can take a long time. I hope we’ll give them a very good game. The FA Cup has always caused upsets so we’ve got to try and do that this time.” – David Moyes

Saturday still feels a like a bad dream, having thrown away three points with the last kick of the game against Everton, but Solskjær’s side need to bounce back on the pitch with an ideal opportunity this evening.

The league meeting at West Ham was the archetypal 20/21 away display; shocking in the first half, stunning in the second as Paul Pogba, Mason Greenwood, and Marcus Rashford scored to claim a 1-3 victory following Souček strike from a corner.

United have advanced from their last three FA Cup ties against the Irons, with Rashford netting a stunning strike in the most recent meeting at Upton Park.

The Red Devils went onto win the competition that term under Louis van Gaal, their last triumph despite reaching the last eight every season since.

Silverware has so far alluded Solskjær in his tenure, and the Norweigan reiterated the importance of winning a trophy in his pre-match press conference.

“You want to win every single competition – FA Cup, Europa League, every game you play, the Premier League,” said the boss.

“And that’s the ultimate challenge and a test for a team: to go all the way. We’ve improved, we’ve had a plan in place, and I think the team is getting better and better.

“Last season’s semi-final was disappointing to lose that one of course, and you just want to go all the way ad you want to lift the trophy.”

The only sure change is between the sticks, with Dean Henderson expected to replace David De Gea in goal following another unconvincing display at the weekend.

With the Europa League Real Sociedad ties over the next few weeks and two league games against lowly opposition (West Bromwich Albion and Newcastle), it may well be the ideal time to give the academy graduate goalkeeper a run of five matches before facing Chelsea and Manchester City.

Ahead of him in defence, Axel Tuanzebe – who suffered abhorrent abuse on social media on Saturday – could play in place of Lindelöf at centre-back while Alex Telles is also in contention to start.

The Brazilian left-back played 90 minutes in the league meeting and after initially struggling to handle West Ham’s Bowen, earned an assist for Greenwood’s goal, as he did for Scott McTominay in the third-round.

On the injury list with Phil Jones, Eric Bailly has a slim chance of being involved but the defender is nearer to returning than Pogba, who was hauled off before half-time against Carlo Ancelotti’s side.

The in-form 27-year-old, who scored a stunner in the capital two months ago, will be out for a few weeks, according to Solskjær speaking to MUTV yesterday.

Donny van de Beek has started in both previous rounds and could take the burden away from Bruno Fernandes in an advanced role, like Juan Mata.

Anthony Martial might do the same for Edinson Cavani up front as the Irons are the Frenchman’s joint-favourite team to face.

He’s netted six goals against them along with three assists in his 10 appearances, although has failed to find the net in his last four.

Winger Amad Diallo could make his first appearance in a senior matchday squad, following his three goals and four assists in two U23 games.

With it all decided on the night, it’s win or bust.

“They’ve improved a lot, I’ve got to say. David’s got his teams well organised, as he always does with his teams and he’s got some very good players. Of course, Jesse did really well for them [in their 1-3 win at Aston Villa last Wednesday] and I hope he’s going to make them a better team because that means he’ll have played well.” – Ole Gunnar Solskjær