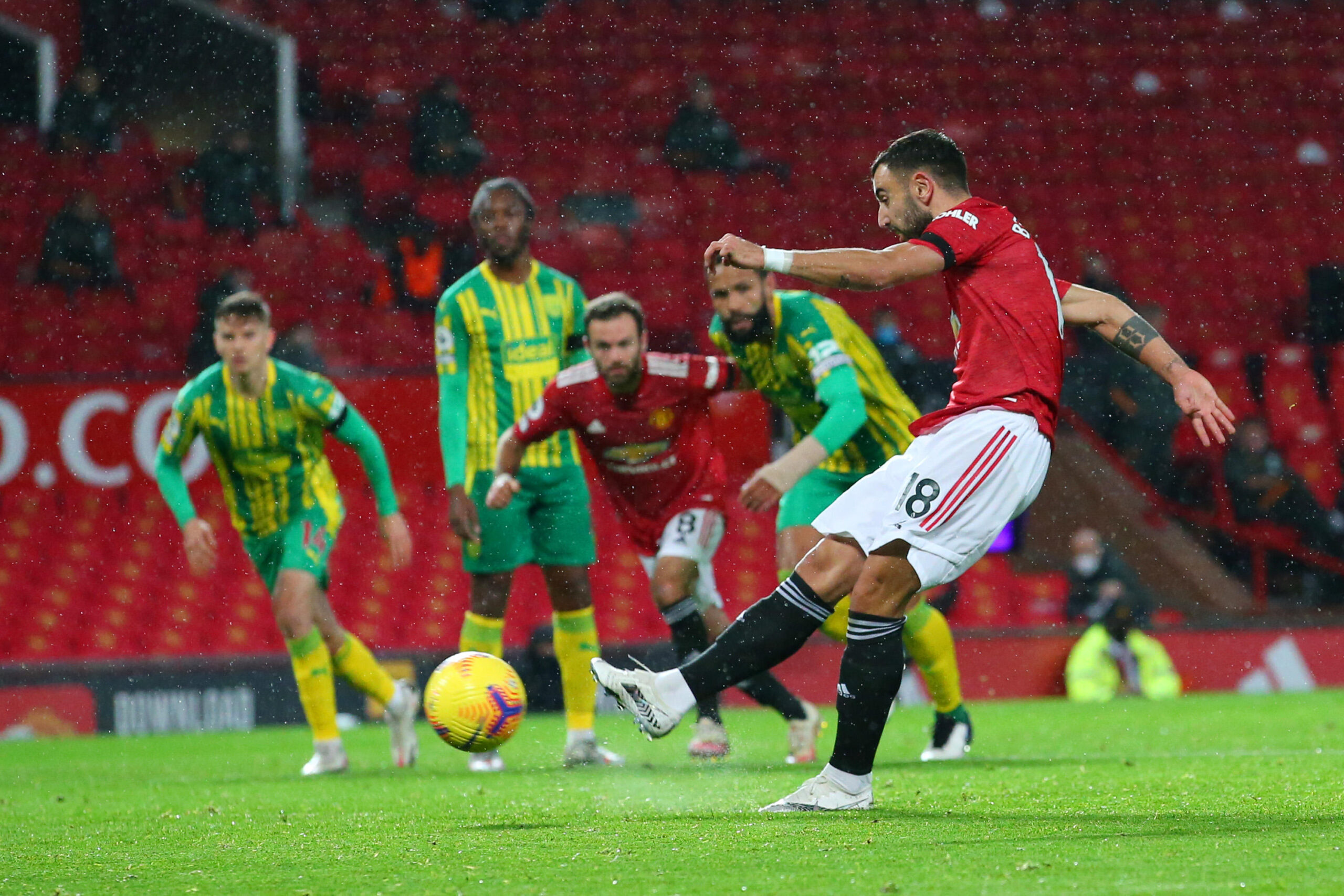 Manchester United are back in Premier League action tomorrow as they travel to face strugglers West Bromwich Albion.

Ole Gunnar Solskjær’s United are hoping to improve their top-flight form having dropped seven points from their last four games but in their way stands Sam Allardyce, who hasn’t worked on his magic on his Midlands men – yet.

With cup competitions taking up midweek concentration for the Red Devils, the focus is on keeping pace near the top of the league this weekend.

Having brought ‘Big Sam’ in following the sacking of Slaven Bilić in December, West Brom remain rooted to the relegation zone in 19th place with just 12 points to their name.

Without a home win or under Allardyce, the Hawthorns has faithful haven’t missed much as far as on the pitch matters go.

Sundays haven’t been an enjoyable day of the week for them to watch their team either, losing seven of their last eight games played.

Stuttering since a victory over local rivals Wolverhampton Wanderers, along with a festive draw at Anfield, the Baggies need a spark to ignite Big Sam’s famous fire fighting.

Performances are improving, though, generating a higher amount of expected goals than their opponents in two of their last three outings, but have only one point to show for the trio of efforts.

Allardyce’s aim is more or less the same for every encounter; ensure safety at the back before trying to build.

It’ll be no different here as West Brom look to claim a scalp and better their decent showing in the reverse fixture at United, decided by a Bruno Fernandes penalty.

You’d be forgiven for thinking Big Sam would buckle down with a five-man defence – and he has at times – but it’s mostly been a 4-1-4-1 formation for the Baggies as of late.

Goalkeeper Sam Johnstone was superb in the November clash, as the Carrington academy graduate returned to face the Red Devils and keep his side in it on numerous occasions.

In front of him, regular centre-back partnership Semi Ajayi and Kyle Bartley should start in this one and the pair both have two Premier League goals to their respective names this season.

Ajayi and Johnstone have each only missed one match this top-flight term, while the rest of the back line has chopped and changed.

Lee Peltier got the nod at right-back for the journey to Spurs, while Darnell Furlong, Dara O’Shea and two-time title winner Branislav Ivanović are also options.

Left-back Conor Townsend has started West Brom’s last two outings and was awarded with a new contract at the club yesterday.

Defensive midfielder Romaine Sawyers returned to the team in London after missing the previous couple of matches but the St. Kitts and Nevis international failed to make a mark, meaning Yokuşlu could be in line for a full PL debut in the single pivot role.

Ahead of him, Maitland-Niles is tipped to start and the now 23-year-old won Man of the Match in Arsenal’s 2-1 loss at the Theatre of Dreams in April 2018, although has spent much of his playing time at full-back for the Gunners since then.

Robert Snodgrass was a mid-season signing from West Ham United, offering an experienced outlet on the right flank with a dangerous left foot, but the Scot is yet to directly contribute to a goal since his Midlands move.

Chelsea loanee Conor Gallagher is capable of some midfield guile, failing to feature in just one of Allardyce’s 10 fixtures in charge but the more conservative Jake Livermore may be preferred.

Star man Matheus Periera is back in the fold after running riot in the Championship last term, with four of his five top-tier goals coming across January.

Interestingly, the Brazilian wide or central playmaker is over-performing in terms of expected goals.

Pereira’s xG in the Premier League is only 2.96, just over half of his actual output for the former Sporting CP man to lead the scoring charts at the Hawthorns, like he does for key passes per-90 minutes (1.96).

With the arrival of target man Diagne and likes of Karlan Grant and Callum Robinson (both much more athletic) alternatives up front, Pereira might increase his tally of top-flight assists in 2021.

Diagne is yet to hit the back of the net but did record a lay on in one of his two starts, having bagged nine goals in 15 games for parent Galatasaray club in the Turkish Süper Lig earlier this campaign.

The entire team’s numbers need to improve, too.

The Baggies’ standings for expected goals scored, conceded and expected points are all the worst in division for those categories.

With Grady Diangana back in training but ruled out, Snodgrass and Periera will likely have most of the ball in build-up play, as West Brom like to get it wide and probe from those areas.

That means Aaron Wan-Bissaka and Luke Shaw will need to watch for any space they vacate in behind as WBA’s wingers will look to exploit it.

Defensively, the Baggies are still suspect with Allardyce lamenting ‘lapses in concentration’ for both goals against Tottenham.

History could play a part, with United having failed to win in three of their last six trips to the Hawthorns.

However, the Red Devils picked up all three points in their latest duo of visits under José Mourinho before West Brom finally failed to beat the drop in 2018 and had two seasons in the second tier.

Now, they’ll have to do it again and victory here may well go a long way to helping Big Sam’s boys survive against the odds.

With a boss who hasn’t tasted relegation in a 28-year managerial career, one would be a naive to think WBA were definitely doomed but they need another great escape like under United legend Brian Robson in 2004.

“If Manchester United are off form and we play to our best we have a chance of beating them – as Sheffield United did a couple of weeks ago. Our best is needed and it has to result in victories for us now.” – Sam Allardyce

Next match: Burnley [A] Saturday, February 20

After needing extra-time to advance past West Ham in the FA Cup on Tuesday, United have had the best part of a week to recover from the attritional affair – a rarity these days.

Scott McTominay got on the scoresheet for the third successive game and the Red Devils were rewarded with a trip to Leicester in the quarter-finals next month.

An ‘away’ Europa League round-of-32 tie against Real Sociedad in Turin comes next Thursday, prior to the hosting of Newcastle on Sunday, but minds must be on Allardyce and co for now.

Solskjær’s side could suffer two blows by the time kick-off comes around, potentially being overtaken by Leicester City in second place and falling eight points behind Manchester City, putting the pressure on United to do their bit.

Down the years, MUFC boast a good record against Big Sam’s seven different sides, winning 18 of their 27 encounters, drawing six and losing three.

Solskjær scored a hat-trick and Ruud van Nistelrooy netted one in the first of those victories, when the Red Devils ran riot to triumph 0-4 at Bolton, just over 19 years ago.

Let’s take a look at who’ll be hoping to emulate that kind of result tomorrow.

Having not been up for true debate in years, there’s a conundrum between the posts.

Following a fifth clean sheet in seven domestic cup games this campaign, Dean Henderson could continue in goal due to David de Gea’s less-than-convincing form and give the England international another opportunity to take the no. 1 spot.

That being said, Solskjær has often gone with the 30-year-old Spaniard in any tussle for the gloves during his time at the wheel.

Arion Armeniakos took a look at the quandary of giving Henderson an extended run in the team today, which can read here.

Eric Bailly is back in training after reportedly being involved in a recent car collision and despite his combative presence probably being beneficial against Diagne, could still be a risk with Victor Lindelöf fit and available to partner Harry Maguire.

McTominay will be hopeful of a start in midfield and will also be looking to make it four goalscoring games in a row to take his total 2020/21 tally to eight strikes.

If regular double pivot partner Fred features, it’ll be his 100th appearance for United and in his pre-match press conference, Solskjær was asked about his progress since a difficult first season.

“He’s really done well and I have to say I have enjoyed working with him from the last few seasons,” said the Norwegian, before explaining the midfielder’s development under coaches Michael Carrick and Kieran McKenna – as well as joking about his shooting.

“It’s Fred himself that has had the hunger and the humility and wanted to learn and to stick at it and keep working.

“Hopefully, he’ll score outside the box soon, although I’m not sure if it’s going to be with his right – I’ve tried to tell him!”

Donny van de Beek also struggled to break down the Irons but many believe that the Dutchman’s time will come, as Danny Jones discussed here.

Hannibal Mejbri had to leave the field early with injury, following he and Shoretine’s promotion to first-team training this week, as Diallo made the bench in the FA Cup.

Winning just five of their 11 post-Sir Alex Ferguson meetings with West Brom (since that 5-5), the Baggies are somewhat of a bogey team for MUFC in recent times.

Three points tomorrow for Solskjær’s side would at least take that victory rate to 50% and help them return to winning ways in the Premier League.

“It’s now that we have to keep our consistency, get the quality higher, eradicate some of the mistakes that we’re making and be more clinical in front of goal.” – Ole Gunnar Solskjær