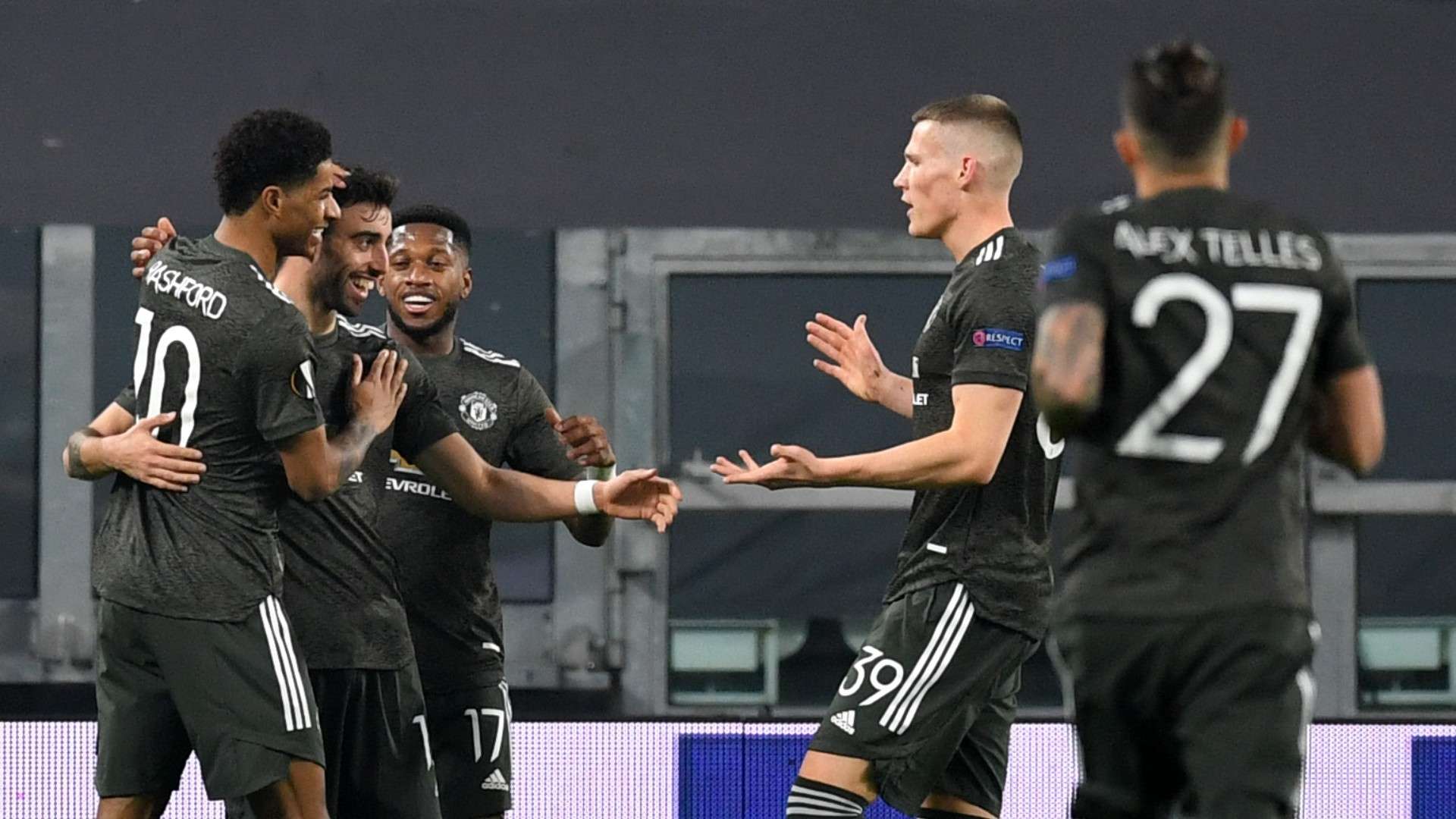 Managers Ole Gunnar Solskjær and Imanol Alguacil will both no doubt have respective league tribulations at the forefront of their minds, with this tie rendered an almost a dead rubber after a one-sided affair in Turin last week.

It’d be an unprecedented surprise if the Red Devils weren’t in the final 16 come tomorrow’s draw, as the visitors need to score at least four to have hope of advancing.

Although last Thursday’s thumping was a setback, Real Sociedad continued their improved form in La Liga at the weekend with a 4-0 win at home.

Finishing in the Spanish top-flight’s top four positions will now be the priority, having not managed to since 2013.

La Reales goal difference from their three successive league wins is 9-1 and the first leg very much seemed to be a blip in terms of performance.

Alguacil’s men are continuing an undoubtedly positive season, all things considered, despite flying higher when the draw was made in December.

Real Sociedad have narrowly picked up more points on the road than at home over their 24-game La Liga campaign (21 to 20), meaning there are reasons to believe for the Anoeta faithful ahead of this second leg.

Additionally, supporters who are into their statistics won’t be worrying about their post-autumn form either, as their side sit second in their domestic top-flight table on expected points.

La Reales also rank the same for most expected goals generated for and least against in La Liga this term – not bad with some of the star power still on show in Spain.

Finally, an apology from us for referring to them as ‘Sociedad’ in our last preview, as they should be referred to as either their full name or La Reales.

One to watch: Portu

Facing Real Madrid in the capital on Monday, Alguacil is expected to make some changes from the first leg in order to keep his squad fresh.

Ahead of goalkeeper Alex Remíro, a few alterations will be enforced as Real Sociedad will be missing three of their back four from the first leg.

Right-back Joseba Zaldua has not travelled due to injury, like central defender Aritz Elustondo.

Andoni Gorosabel should replace Zaldua, while Igor Zubeldia and Aihen Muñoz are expected to be the centre-back pairing.

23-year-old Muñoz, like midfielder and captain Asier Illarramendi, is an academy graduate, and the club have a remarkable run of 2,675 consecutive matches with at least one homegrown player in the starting XI – compared to the Red Devils’ 4,000, but only in a matchday squad.

Adnan Januzaj, one of United’s own, will return to the Theatre of Dreams for the first time since leaving the place of his youth and the Belgian failed to show his quality in the first leg, misplacing a number of crosses in good areas.

Mikel Merino has played more minutes than any outfield player this term but is expected to increase his tally this evening, having been taken off after 66 minutes on Sunday, shortly followed by former Manchester City man, David Silva.

The club’s youngest ever debutant in more than 80 years, Ander Barrenetxea, made a substitute appearance in Turin, a shining example of the products produced in their acclaimed academy.

Fellow wingers Portu and Mikel Oyarzabal, the latter of whom has 15 direct goal contributions in 19 league games, grabbed a goal and assist respectively against Alávez in San Sebastián but their Swedish striker took the weekend headlines.

The man, Isak, was recently challenged to be more lethal in front of goal by boss Alguacil and six goals in three La Liga games later, he’s been exactly that but is yet to net in this Europe this term.

Gaffer Alguacil, this time speaking to the media ahead of the trip to England, told reporters about a particular strength of United’s which played a significant part in the affair last week.

“Technically we could say we’re equal but physically they’re really much more powerful,” revealed the Spaniard.

“Right now, we cannot really compete with a club like Man United in terms of squad etc. It’s not just a step, it’s a huge leap.”

The 49-year-old, known as Imanol as player, also said: “I have to say it could be almost impossible to go through but I believe that my team can compete.

“I think we can clean our image, win the game and learn from what happened in Turin.”

They’ll be keen clean up Spain’s image on the European stage, too, with four of the country’s five sides losing in the first leg of their respective Champions League or Europa League knockout rounds.

Real Sociedad have only managed to score five goals in their seven UEL games so far but like in their domestic league, are usually effective pressers, with only Tottenham Hotspur winning the ball in the final third more times in this season’s Europa League campaign.

La Reales also rank second for highest average possession from their continental exploits with 64.2% but their game was clearly put off last time out, as Solskjær’s side reduced it to 59% before exploiting their high line.

Looking to get back to their usual selves, expect a better showing from the Basque boys.

United managed two wins on the bounce for the first time since the end of January on Sunday, as Bruno Fernandes, Daniel James and Marcus Rashford scored in the lacklustre 3-1 victory at Old Trafford.

The same trio were on the scoresheet in Italy seven days ago, giving Solskjær and co more than the upper hand here ahead of three tough away Premier League matches next week.

The manager wants to build momentum, though, challenging his players to keep up the pace in multiple interviews since leg one.

Today marks five years since Rashford made his dream debut at the theatre of them against FC Midtjylland at the same stage of the UEL, scoring twice in a 5-1 second-leg win.

The teenage sensation celebrated with a certain academy teammate in the stands, Dean Henderson, and the pair may well swap roles tonight – more on that soon.

That tie extended a still-ongoing run for United of not losing a Europa League home game since 2012 when Athletic Bilbao came to town.

Let’s see who’ll be facing the next traveling Spanish team.

Edinson Cavani, Scott McTominay, and Donny van de Beek all remain ruled out, along with Paul Pogba and Phil Jones.

Youngster Hannibal Mejbri also won’t be available due to a shoulder injury, shortly after linking up with the senior squad.

With reports suggesting Henderson will push for a move away in the summer if he’s not installed as the Red Devils’ regular no. 1, the English stopper should at least get a chance to shine this evening.

Brandon Williams and Axel Tuanzebe could see opportunities at right and centre-back, respectively, while Alex Telles and Eric Bailly will also be pushing for starts.

Nemanja Matić and Fred may have to operate as a double midfield pivot like they did against Newcastle due to McTominay and Pogba’s absences, and it’s currently unknown when the pair will return to action.

The good recent form of James should see him keep his starting spot but the Wales international could potentially be shifted to United’s left-wing with Mason Greenwood expected to return to the starting XI, with Rashford rested.

James joined his manager for yesterday’s pre-match press conference and told reporters via video link: “I think you’ve seen this season we’re so hungry to pick up silverware.

“I think last season we were just that little bit off, but this season we want to go that step further.”

Amad Diallo made his debut in the first leg and Shola Shoretire got his first bow at the weekend but starting births for either this evening are unlikely.

On the other end of the age spectrum, Juan Mata is in contention to get the nod over Fernandes to play behind the struggling Anthony Martial, who will be looking to get back in the goals.

Another comprehensive performance for the Red Devils wouldn’t hurt, even if the matchup might go down in history as a fan-less non-event.

“For me, the fitter you are, the more you can do. The best teams have the physicality, technicality, and mentality… We found a way of finding space in behind them [Real Sociedad], but they are very technically good. When you have David Silva out there, you have to focus for 90 minutes.” – Ole Gunnar Solskjær

Next match: Chelsea [A] Sunday, 28 February