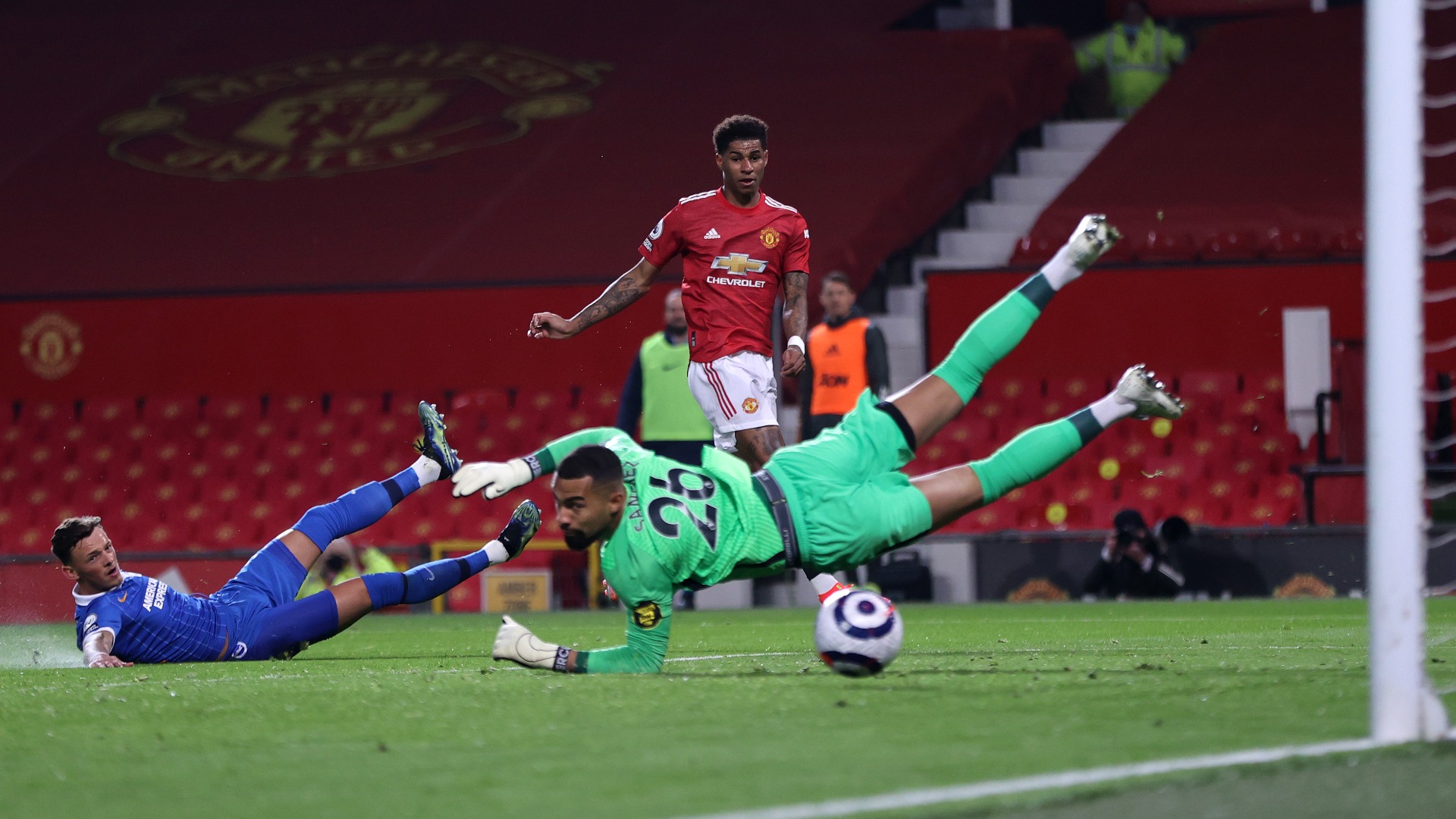 Ole Gunnar Solskjær made four changes from the side which lost to Leicester (two of them were forced), dismissing any suggestions that he had ‘disrespected’ the FA Cup with his team selection before the international break.

Luke Shaw and Marcus Rashford came in for Alex Telles and Anthony Martial, who were ruled out with illness and a knee injury respectively. Edinson Cavani replaced Van de Beek with Bruno Fernandes slotting back in place of Nemanja Matic.

Brighton took an early lead after United had started brightly. A cross from Bruno Fernandes landed at the feet of Greenwood who lashed at it first-time but his shot cannoned off the upright.

Instead it was another United academy graduate who scored but for the visiting team. Some neat play from Brighton down their right-hand side culminated in Danny Welbeck heading in Joel Veltman’s cross. Dean Henderson made a fantastic stop to the initial header but he could do nothing with the rebound.

United’s bright start faded and it looked like it was going to be ‘one of those nights’ at Old Trafford again. United went into half-time trailing by one goal but if there’s anything to learn from this United side is that they’re capable of overturning any deficit.

No changes were made at half-time by either team but United started on the front foot instantly. A more intense counter-pressing allowed them to win the ball further up the pitch, limiting Brighton to few opportunities to break.

Instead, Harry Maguire’s thumping headed clearance was flicked by Cavani onto Fernandes who drove towards the Brighton defence with Rashford and Cavani on either side. Fernandes found Rashford, despite being fouled in the process, who delightfully slotted it past Sanchez. It was Rashford’s fourth goal in his last five appearances against the Seagulls, making the south-side club one of his favourite opponents.

With the honors even, Brighton pushed up higher and reverted back to their initial gameplan instead of sitting deep and absorbing the United pressure and it nearly earned them a winner.

With 70 minutes on the clock, the visitors broke and Maupay’s disguised pass trickled inches wide of the right-hand side post, having Henderson rooted to the ground. Welbeck threw himself to the ground in a clear attempt to con the referee but Mike Dean was having none of it.

Instead it was Greenwood who was the homegrown hero at Old Trafford this time. He had been denied by the post in the first half but he wasn’t to be this time. Luke Shaw brilliantly found Fernandes in some space created by Donny van de Beek. Fernandes lofted the ball towards Pogba who had made a run in to the box but the Frenchman’s scuffed shot was met by Greenwood’s head. Ben White on the goalline couldn’t keep it out for Brighton.

It was the sort of goal Solskjær has been craving from his forwards. The ugly goals coming from clever runs and it was just that. Greenwood anticipated that there might be a rebound or that Pogba might mishit it and that’s exactly what happened.

Greenwood has been in fine form in 2021 but hasn’t score near enough goals to show for it – that will do wonders for his confidence.

The win means that United open up an 11-point gap to Tottenham who sit in 5th place, and a four-point advantage on Leicester in third.