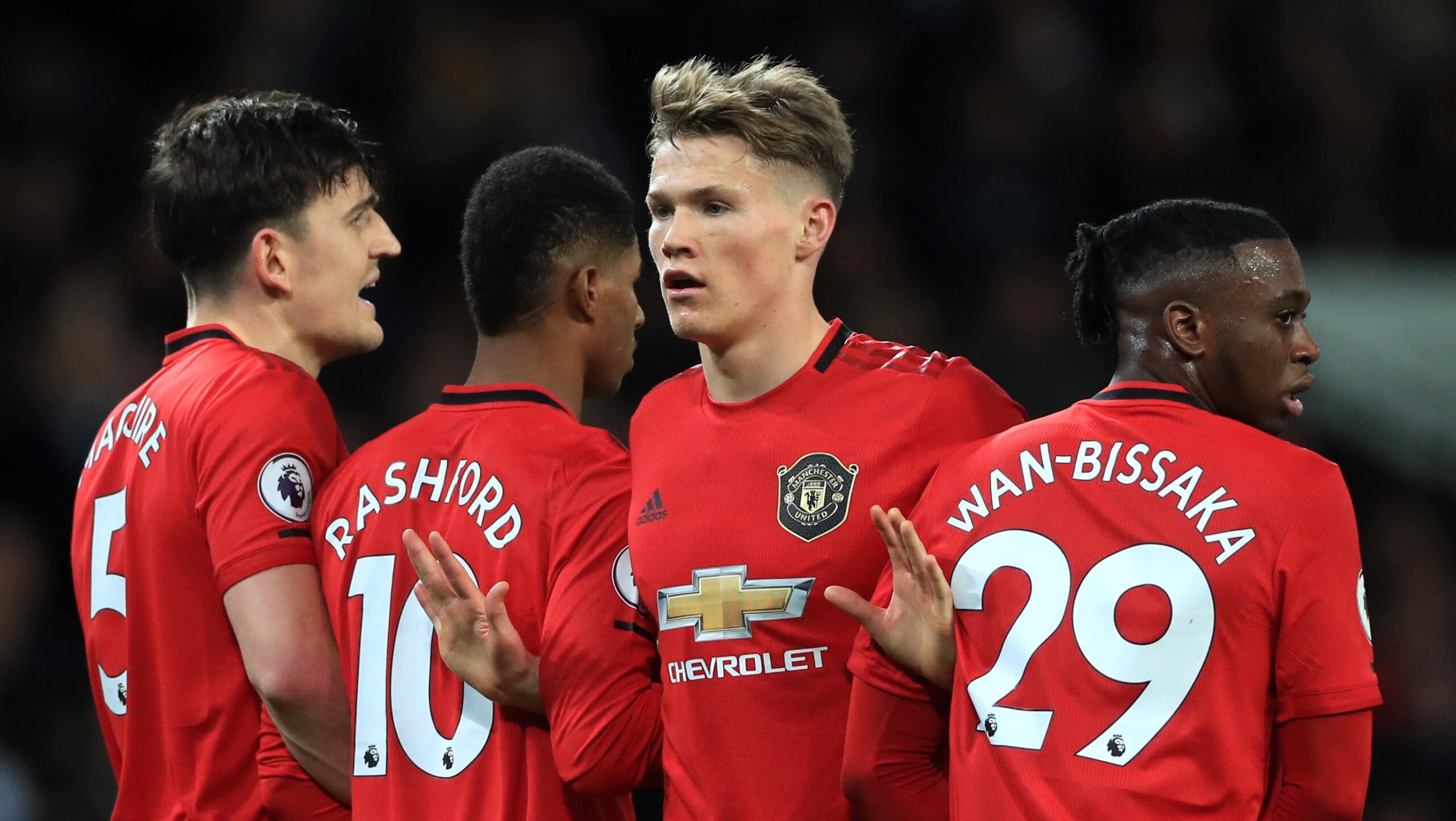 Although it ended without a trophy, Manchester United’s 2019-20 will go down as one in which undeniable progress was made.

Ole Gunnar Solskjær oversaw the club’s worst start for 30 years but also got the best out of various rough diamonds and recruited to great effect, leading to a post-lockdown resurgence.

So, with the season done and dusted, here are our player ratings for the close to year-long campaign.

‘You either die a hero, or you live long enough to see yourself become the villain.’ That’s a famous Batman quote but the days of de Gea’s superhero status at Old Trafford appear to be over.

Costly errors in crucial games and looking less convincing with the simple saves, his world class interventions weren’t often enough to give him a more respectable rating.

Dean Henderson is on his way through Snake Pass, with the four-time Sir Matt Busby Player of the Year winner’s number one shirt in his sights. You couldn’t make much of an argument that he doesn’t deserve the chance after a disappointing season for the Spaniard.

Although he made a few rare errors, his crucial saves in Brugge and Wolverhampton were vital in getting United to the Europa and FA Cup semi-finals respectively, both of which he surprisingly did not start in.

He also played in the early league cup rounds but didn’t feature in the two semi-final legs.

With persisting knee injuries and Henderson’s return, Romero night not manage many more appearances at Old Trafford but this term has again shown his ability when called upon.

For a quiet 21-year-old to move to Manchester from Croydon is a big enough jump, but to take to it as natural as Wan-Bissaka has is a feat which warrants his name being firmly in the Player of the Year conversation.

Once again topping the table for tackles and making 46 appearances in all competitions is exactly what he’ll have hoped for when Crystal Palace took £50m for him last July.

Our POTY so far during lockdown, he is well worthy of his rating here.

Reliable and steady is sometimes what you need most at the back in football and a less than spectacular yet secure season for Lindelöf sees him pick up an average rating.

Chosen 47 times by Solskjær out of the team’s 61 outings shows the constant trust his boss has in him but if he wants to be a staple of the defence long-term, he’ll have to up his game.

With an £80m price tag on his back, it wasn’t going to be an easy task for Maguire to significantly improve United’s defence.

However, 27 clean sheets in all competitions and playing every minute of a Premier League campaign – in which the Red Devils only conceded two and three goals more than Manchester City and Liverpool respectively – he evidently did.

Earning the captain’s armband and offering Solskjær’s side an extra outlet from the back, his few errors may have been well-documented, showing just how much he’d impressed.

It took Shaw coming out of the team with yet another injury to highlight his importance. Looking good at centre-back in a three pre-lockdown, he seemed even sharper upon the restart.

Clearly feeling comforted by the manager’s arm around his shoulder and benefitting from positional competition, last season’s POTY has put in another admirable effort.

Being the man who gave Shaw some well-needed pressure to earn the nod at left-back, Williams blisteringly broke through and made his mark in memorable wins at Stamford Bridge and the Etihad.

His tenacity and nimbleness was refreshing but lacked the defensive ability of his experienced teammate which saw his minutes diminish until very late in the campaign. The future looks bright for the Manc.

Bailly has always been an enigma; undoubtedly talented, yet undeniably erratic.

Again, injuries have stunted his progress and it’s hard to give him a decent rating despite is largely solid performances.

Although he made good of a rollercoaster maiden campaign at Old Trafford, Dalot’s time at the club already seems to be up.

The 21-year-old never convinced in his 11 appearances due to his defensive lapses and he’s been linked with a move away.

When the time came for him to slot in at left-back against Palace, he was overlooked for someone who hadn’t played a game of football for over a year, in the most damning showing of Solskjær’s distrust yet.

Following a fruitful loan spell at Aston Villa, this was supposed to be his breakthrough term at Old Trafford. Sadly, it wasn’t.

Persistent niggles and knocks knocked the exciting defender back, but with age of his side, he’s got time prove himself.

The glimmer of hope in Jones has been slowly flicking out season-upon-season and this campaign has arguably been his dimmest.

More injuries, fewer games, and hardly ever considered a starter, the former international‘s time at Old Trafford seems to be coming to a dark end.

Three years had passed since Fosu-Mensah last played for United when he was shockingly selected to face his aforementioned former loan club in July.

It was his first game of the season and he did well, impressing enough to start the next league game, only be to be dragged off after 45 minutes.

Unlucky with injuries but he can’t get lucky with his rating.

Reborn after a long-needed break during the height of the global pandemic, Matić’s presence perfectly complemented his fresh teammates and he earned himself a new three-year deal in the process.

Although he lost sharpness towards the end of the term, it can’t be said that he wasn’t integral to United’s summer turnaround.

Plagued by injuries and speculation surrounding his future meant, at one point, it didn’t look like Pogba could play in red shirt again.

However, in one of the few upsides to football being suspended, the once most expensive player in the world returned to the pitch.

Taking the pressure off a new man – more on him soon – he made a decent impact, other than his handball against West Ham, in his 22 outings.

Not much needs to be said of Fernandes.

His January transfer rejuvenated United after an injury-hit winter and after many doubted he could repeat his outstanding Liga NOS numbers, he matched his eight league goals and seven assists that he’d racked up in Portugal in three fewer appearances in the Premier League.

Penalties may have bloated his statistics but his impact was immeasurable. Getting into the conversation POTY despite his mid-campaign arrival, it’s testament to his terrific half of a term in England.

If not for an injury, McTominay may well have passionately anchored the Red Devils far more times than he did in 2019-20.

37 appearances but many from the bench, the Scotland international’s impact was more often seen against the weaker sides but no one will forget *that* goal in the March Manchester Derby.

As someone who epitomises United’s season, Fred went from a write-off to a key component in the squad during some dire circumstances.

Injuries to midfield teammates meant the one-time flop had to stand up and be counted at crucial times – which he did.

Outstanding performances at Chelsea and both home & away against Manchester City saw his stock rise alongside McTominay in a less glamour, more graft kind of midfield.

He might not be the holding midfielder to drive United on, but he’s certainly always been there to put a shift in.

It was a surprise last summer when Mata got a two-year contract with the club but was no shock as to what role he played.

Crucial in cup competitions but lacklustre in the league and almost more prominent off the pitch, the nicest man in football been as average as they come, which isn’t anything to criticise.

Another big signifier of the Red Devils’ season is that Pereira racked up 40 games and he only impressed in a handful.

A willing worker without a staple position, his versatility is what saved him when the squad was ravaged with absentees.

His luck came to an end after lockdown when he was shifted out of the team and could be shipped out of the club if a suitable offer comes in.

There once was a time where Lingard looked to be an integral part of his beloved club for years to come.

However, football is an unforgiving game, and having only scored his first goal of the campaign on the final day at Leicester, he failed to make a mark in a turbulent term for the 27-year-old – on and off the pitch.

When his manager lost his cool with the former England international in the Carabao Cup semi-final second leg, it showed that his boss’ patience, as well that of supporters, was wearing thin.

With Mino Riola making him a client, it seems only a matter of time before Lingard makes a fresh start elsewhere.

Thankfully, 22 goals and 11 assists from the wing or occasionally through the middle saw the 22-year-old produce his most prosperous season yet as he carried the Red Devils through a difficult winter.

Eventually, his back broke out and the injury clearly stifled his season after lockdown heroics in which he achieved more than he ever could on the pitch.

23 goals saw Martial pip his strike partner to the club’s top goalscorer his campaign. Unlike Rashford, the 24-year-old took a while to truly get going.

However, when he hit United’s first league hat-trick since Sir Alex Ferguson’s retirement, it seemed he’d finally found his role as the number nine.

Improving his hold-up play and attacking aggression while maintaining his dynamic dribbling saw the French marksman look to be the complete package.

He may still have a way to go, but he’s certainly proving his doubters wrong.

Scoring on your debut at Old Trafford is one heck of a start – but it never got any better for young James.

Brought in to be squad player until injuries, outgoings, and no additions to the attack meant he was relied upon more often than anyone had anticipated.

After losing his father just before making the move to Swansea City, it was always going to be tough for the clearly talented winger.

However, his hard work added to four goals and seven assists, a decent return for his maiden top-flight term.

Want a good example of a breakthrough season? Take a look at this star in the making.

17 goals, many of which were important, have seen Greenwood cement himself in the first-team and made the right-wing spot his own.

He can’t gain a much higher rating given he only truly became a key player late in the campaign but there’s no argument of who deserves the club’s Young POTY.

Other than a sparkling cameo at left-back against LASK in the Europa League round of 16 second leg, it’s been a fairly disappointing season for Chong.

Granted, lots of competition in his position means he struggled for minutes but never quite took his chances when he was on the turf.

Now loaned out to Werder Bremen, the Dutchman will now have the opportunity to get regular first-team football in a league known for its successful development of youngsters.

Five goals and eight games in cup competitions was good enough for a 31-year-old target man to be kept on until next January, and although he’s not the future, he offers something in the present.

What did you make of our ratings? Let us know your thoughts!