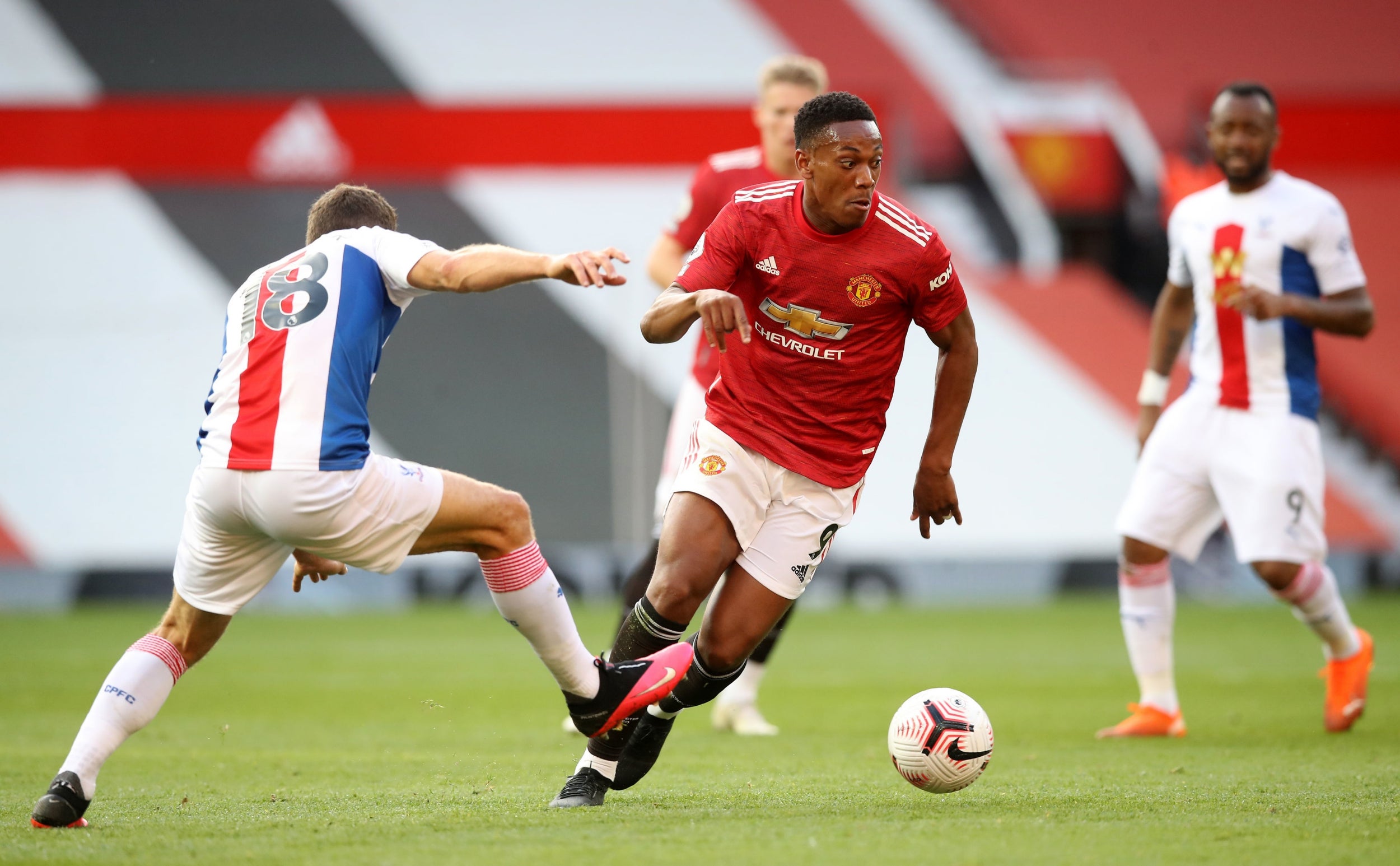 For the second year running, United got beaten by Crystal Palace at Old Trafford. An extremely poor performance resulted in a 3-1 defeat for the Red Devils. In this analysis, I will try to break down what went wrong for United in this game and what they have to solve going forward.

Manchester United started in their usual 4-2-3-1 formation with Daniel James instead of Mason Greenwood who was on the bench and Timothy Fosu-Mensah instead of Aaron Wan-Bissaka, also on the bench. Scott McTominay started as Nemanja Matić was not fit to play.

United faced a team defending in a 4-4-2 shape. In the early stages of the game, United decided to build from the back with two centre-backs, which is seen below.

Timothy Fosu-Mensah helped by being inside as Daniel James’ profile is more suited to keeping the width high and wide. The Dutchman stayed deep as Ole Gunnar Solskjær probably deemed James not good enough to play inside, like Mason Greenwood’s positioning post-lockdown last season.

Playing two centre-backs when you build out the back against a 4-4-2 gives you almost no possibility to create overloads in deeper areas.

While it creates triangles on both ends of the pitch to help the progression of the ball, It also means your central midfielders are man-marked when they receive the ball. It is shown below with Pogba immediately being pressed after a pass from Victor Lindelöf. His only option is to pass the ball back to Fosu-Mensah, which subsequently leads to no danger for Palace.

Once Palace scored their first goal in the seventh minute, United immediately switched to a three at the back in buildup, which makes more sense as it gave United an extra-man against Palace’s first line of pressure.

As you can see above, the spacing is great. Indeed, Daniel James who is not on the picture stays wide to stretch the opponent’s backline. Both Bruno Fernandes and Marcus Rashford stay inside to receive the ball in order to progress the play to either Luke Shaw and James, according to where they receive the ball. However, Palace were closing passing lanes between the centre-backs and the forwards inside. Although those spaces were closed well, the centre-back in the middle of the three had enough space infield to hit Martial if the Frenchman was tasked to drop deeper to provide this option. United’s neighbours Manchester City are often doing this against 4-4-2 defensive shapes as it pulls a centre-back out of position to create space behind the defensive line and the striker has two passing lanes close to him (in this case, Fernandes and Rashford for Martial).

United struggled to progress the ball in the first half against Palace which subsequently lead them to not create much chances. At half-time, Mason Greenwood came on for James.

Greenwood’s inside positioning pushed Fosu-Mensah higher and the right-side finally had enough quality to sustain possessions there to quickly switch the play to the superior flank with Shaw and Rashford, which is highlighted above.

The quality on the ball Greenwood provided was superior to James and it helped United operating switches between Rashford and Greenwood, which lead to situations like the one below.

Rashford was finally able to receive the ball on the half-space thanks to the rotations he performed with Greenwood and he passed the ball to Fosu-Mensah into space. The main issue with the crosses in the second-half was that there weren’t enough forwards into the penalty box.

This is where Van De Beek helped once he came on. Below, you can see Van de Beek playing particularly high and close to Martial and Rashford. It subsequently pushed Palace’s defensive line lower into their own half.

His awareness was also crucial to United as the Dutchman was always scanning the pitch to find holes to receive the ball. He even scored United’s only goal of the game by being in the right place at the right time. It was a bit of a lucky goal but you will see the Dutchman often scoring lucky goals this season, which indicates it is also down to his positioning.

What I found underwhelming about this performance was how United handled defensive transitions, especially in the second half. Firstly, we need to understand that United were pushing high to score the equaliser when Palace were 1-0 up, which means Palace would have chances in transitions. However, it happened too often and United’s midfield line was too easily cut through and United centre-backs often found themselves in three vs two situations.

There weren’t enough people behind the ball and United weren’t compact either to make a press immediately after a loss of the ball.

Manchester United suffered a disappointing opening-day defeat in the Premier League with this 3-1 loss to Crystal Palace at Old Trafford on Saturday. While the performance was extremely poor, Van de Beek’s performance was one to be positive about. However, United definitely need new signings to compete this season. Nonetheless, the coaching staff should also be aware the issues seen against Palace aren’t only due to poor quality as United don’t lack offensive firepower with Pogba, Fernandes, Martial or Greenwood.