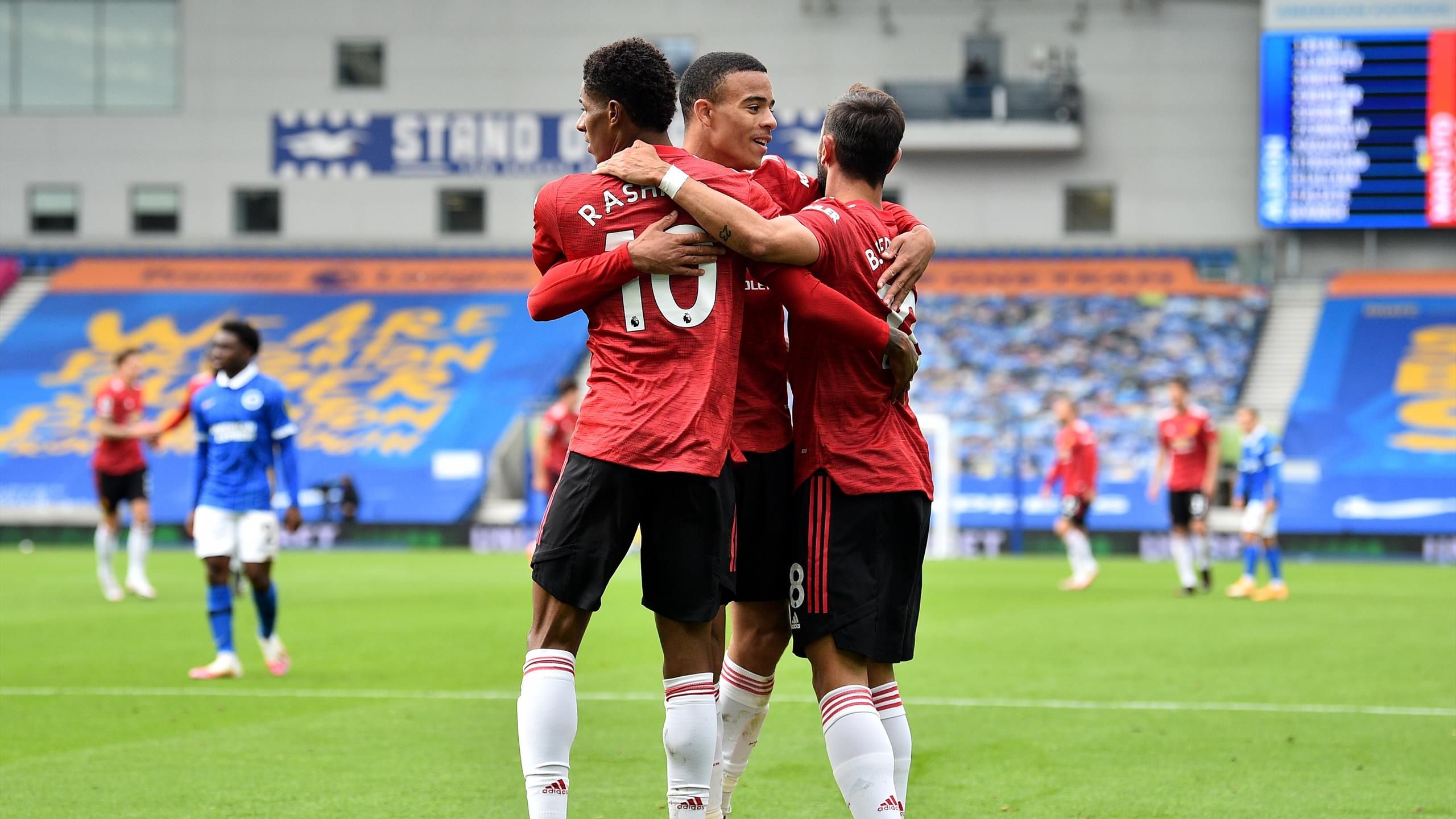 Manchester United were going up against Brighton & Hove Albion in their second league game of the season. The Red Devils won twice against Brighton last season with a 6-1 score on aggregate, which suggested an easier game than last week’s against Crystal Palace. However, it didn’t go as planned and United had to come back from a goal down to claim a 3-2 victory over the Seagulls and earn our first three points of the season.

In this tactical analysis, I will break down why United struggled so much yesterday and what they should improve on for the reminder of the season.

Ole Gunnar Solskjær opted for his usual 4-2-3-1 formation with Nemanja Matic and Aaron Wan-Bissaka coming in for Scott McTominay and Timothy Fosu-Mensah. This was United’s preferred lineup after last season’s restart and what helped them secure a top four spot.

Struggles at progressing the ball

For the second game in a row, United struggled at getting the ball out the back. They couldn’t find passing lanes in the middle of the pitch and had to rely on wide areas to find bodies higher up the pitch.

In similar fashion to the game against Crystal Palace, Brighton were able to man-mark United’s back four and their pivot to avoid ball progression.

Matic subsequently had to drop deeper to get the ball but he struggled to get the ball higher up the pitch. Paul Pogba had the same issues at progressing the ball and both relied on long balls, as highlighted below. These long balls led to nothing since United don’t have forwards good enough in the air.

These struggles to get the ball out the back cost United on the action which brought Brighton’s penalty.

Harry Maguire couldn’t progress the ball higher up the pitch because no passing lanes were open. Therefore, he decided to pass the ball to Luke Shaw. However, if Maguire was left-footed or thought about putting the ball into space to Matic with his right foot, United could’ve progressed the ball centrally.

Shaw immediately faced a Brighton player and had to pass the ball back to Maguire, which means this buildup from United lead to nothing.

Maguire was pressed but saw Wan-Bissaka on the opposite side. However, by the time he received the ball, the young full-back was pressed by a Brighton player and lost the ball which lead to the penalty for Brighton. This action is the epitome of United’s ball progression issues since the start of the season.

With United’s struggles to progress the ball centrally, Anthony Martial decided to drop deeper to open passing lanes to his teammates. He was the only forward asking for the ball and he tried to make things happened. Both disallowed goals from United yesterday were initiated by Martial.

After dropping deeper to ask for the ball, Martial was able to bypass an entire line of pressure on his own to then find Marcus Rashford alone on the left. However, his English teammate was offside and Greenwood’s goal was disallowed.

After asking for the ball in a deeper area, Martial finds Greenwood in space. Unfortunately, Greenwood’s pass for Rashford was in an offside position. Second goal created by Martial’s movement disallowed.

While it is definitely a positive to see Martial contributing without scoring a goal, Solskjær should be worried that the French forward is not in positions to finish. Indeed, one of the massive benefits of buying Bruno Fernandes in January was that the Portuguese pushed Martial higher up the pitch and was the new link between midfield and attack. Eight months forward and Martial has to drop deep again to be the link within this United side.

Before the start of the game, I said Brighton would struggle on defensive transitions, like they did against United last season. Three of the six goals United scored against Brighton were on transitions.

While United struggled to exploit these issues in the first half, Rashford scored the second goal on transitions after a perfect through ball from Fernandes.

In the first half, United only had one opportunity on transition and they didn’t negotiate it well. Martial was running into space and Greenwood was on the opposite side of the ball, as highlighted below. By the time Greenwood got the ball, four United players were in the same area as seven Brighton players.

BRIGHTON PLAYERS AT THE BACK SPOT

On the still below, nobody is covering Solly March on the back post as United players are attracted to the middle of the penalty box.

This movement resulted in a goal from Brighton in the 94th minute, with Bruno Fernandes and Aaron Wan-Bissaka not communicating about March’s positioning.

This lack of communication already was an issue against Sevilla in the Europa League and something United’s coaching staff should try to solve as quickly as possible.

Manchester United won the game thanks to a last-second penalty from Bruno Fernandes but this sort of win isn’t sustainable. While they had less of the ball, they also had less shots on target than Brighton. Brighton got let down by the lack of true goal-scorers in their team and by a lack of luck as they hit the woodwork on six occasions.