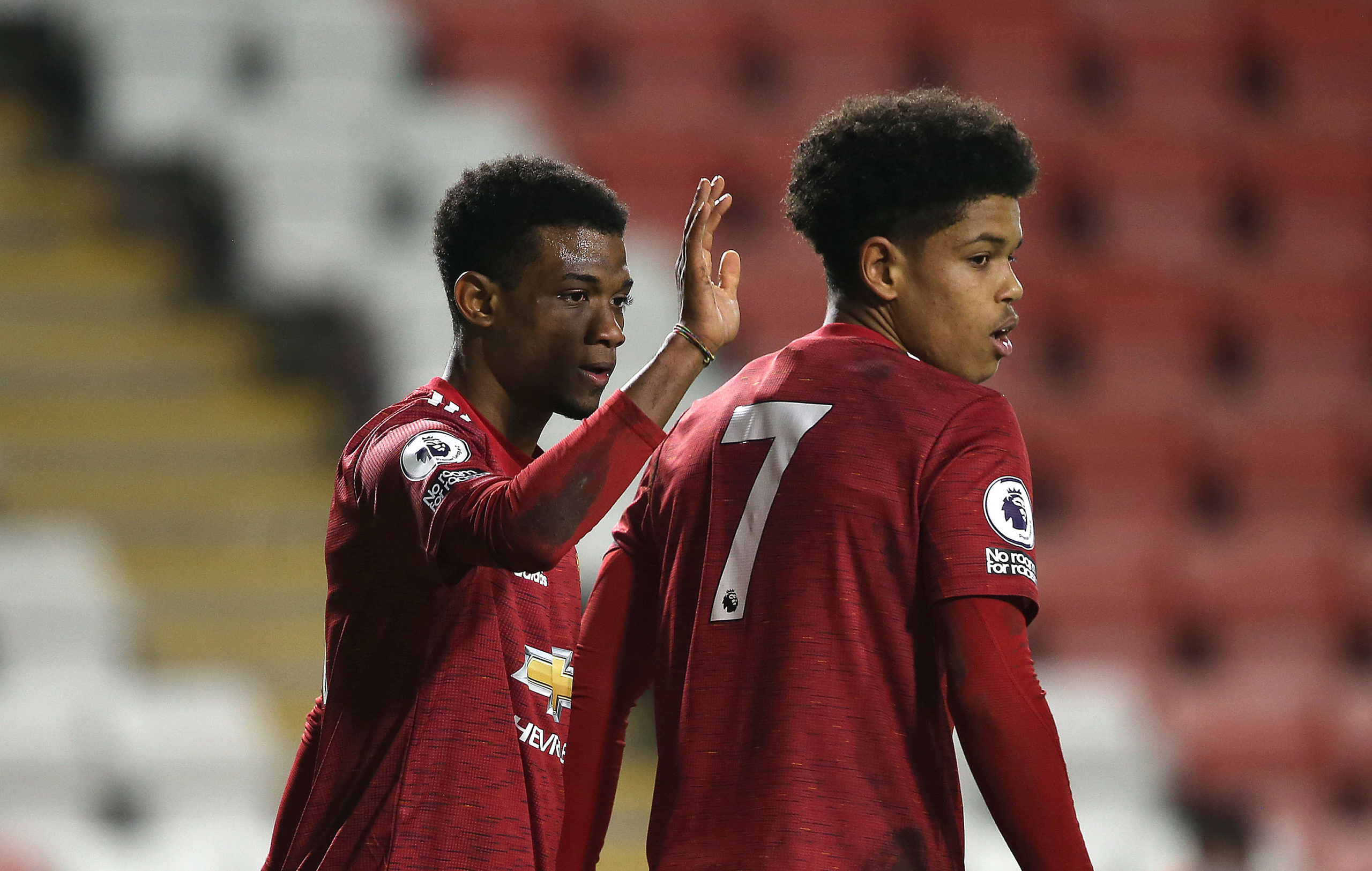 Eerily similar to their senior team colleagues, the Manchester United U23’s are no strangers to free flowing, entertaining attacking football.

Neil Wood’s side boasts records for the most goals scored (39) and conceded (39) in the PL 2 this season. And while they sit lower than they would like in mid table at around the half way point of the campaign — for a plethora of reasons including injuries and loans — the young Reds make up for some disappointing results in entertainment value.

Having been watched more closely than arguably ever before over the last two games as a result of the arrival of one Amad Diallo, Wood’s side scored 12 and conceded seven en route to two big league victories. All of that done with one fit center back in Will Fish, who was unavailable for the second of the fixtures.

That fixture being a 6-4 thriller against league leading Blackburn at Leigh Sports Village.

It was another very highly anticipated affair as it was an opportunity for the United faithful to get another close look at 18-year-old Diallo who made his second appearance for the U23’s, first one on home turf.

Getting some valuable minutes into the tank, Diallo shone in his debut last week as he bagged a brace in a frantic 6-3 win over rivals Liverpool at Melwood. It was a first impression well made that set the bar quite high to say the least. But it eventually proved to be nothing in comparison to what he and his teammates got up to on Friday night.

After coming back from behind three times, Amad himself will steal the headlines again, and rightly so. The winger was a nightmare for a second back line in a week as he scored another goal and provided three assists in the young Reds rampant victory. That’s now three goals and three assists in 180 minutes in the PL 2 — a G/A tally Bruno Fernandes himself would be proud of.

But besides another dazzling display from United’s new wonderkid, two other young stars also reminded fans of just how bright the future is looking for United’s attack for years to come.

Shola Shoretire making noise on the youth football scene is nothing new. The forward famously made his UEFA Youth League debut at just 14 three years ago, and the strides he has made since then are glaring. Gradually filling into his frame and with bags of talent to boot, Shoretire chipped in with a hat-trick (all three set up by Diallo) and an assist against the Rovers.

Shoretire now has 9 G/A for the season (5 goals, 4 assists) in 13 PL2 appearances — quite a remarkable feat for a player who just turned 17 a couple of weeks ago. The last 17-year-old to perform this well at the U23 level now wears the No. 11 in the first-team at 19. Sky is the limit.

Midfield maestro Hannibal Mejbri too stood out head and shoulders above the rest. While Shoretire is a United product through and through, the Frenchman is similar to Diallo in that he was a smart investment by the club, signing for the Reds 18 months ago for approx. £9.3 million.

Some players simply make complex things on a football pitch look easier than others. Mejbri is one of those players. With some work still to do on his physique, the 18-year-old bravely throws his body around while operating on a different level to those around him footballing wise.

The French youth international only had one goal to show for his efforts on Friday, but it was some goal at that. Mejbri was sent through on goal via a through ball from Shoretire. Taking the ball in his stride, the midfielder entered the box, opened up his body and faked a right footed shot which left one defender on his back side, before cooly slotting home with his left to then bring United level at 1-1.

Hannibal Mejbri’s goal to make it 1-1

After the goal, Mejbri was clearly the best midfielder on the pitch. He ran things with his mature football brain and 360 degree vision. Controlling the pace and spraying passes all over, teammates around him took care of the rest of the scoring.

Amad’s lone goal was the sixth on the night for the young Reds and it came at the end of arguably the slickest move of the lot.

United had way too much time on the ball on the edge of the visitors box with the eventual scorer at the heart of things. With the ball then at Shoretire’s feet, the Englishman laid it off for Charlie McCann while Amad made an off-the-ball move into the area. McCann then clipped a perfectly weighted ball over the defense, matching the darting box bound run of Alvaro Fernandez. The Spaniard cut the ball back first time right into the feet of Amad, who showed brilliant composure to adjust his body and drill a low half volley into the net. A scintillating, intricate passing move.

Amad Diallo picks up three assists and a goal against Blackburn Under-23s 👏 pic.twitter.com/vYcPGnwQF1

Goal scoring star of the show, Shoretire, demonstrated terrific movement off the ball for all three of his strikes. But his best finish of the night was sandwiched between two tap ins. For his first and third, Amad and co. did the work that simply needed the 17-year-old’s seal of approval. His second, though, showed excellent communication with Diallo (watch for the wave in the clip), a clever run into space and a fantastic headed finish to top it all off.

While visibly struggling defensively, and understandably so, the raw talent and other worldly potential of United’s front line made up for any deficiencies ten-fold. Over the past couple of games, the young Reds took on the approach of simply outscoring their opponents. It’s not a sustainable winning formula, but it just goes to show how much quality is soon to be knocking on Ole Gunnar Solskjaer’s door and asking for a chance.

It is also worth noting that these attacking antics are taking place without the injured Anthony Elanga — an 18-year-old Swedish winger who has arguably been the team’s best player this season with six goals in 12 PL 2 appearances to his name prior to being sidelined.

With all of this said, one thing is for certain: United’s academy has well and truly been revamped. The U23 side is once again filled with exciting teenagers that are showing an enormous amount of first-team potential and, with a manager like Solskjaer in charge, are likely to get an opportunity to stake their claim at places in the senior squad long-term.

For the here and now, Amad is the talk of the town. The hype surrounding his arrival and the price tag put certain expectations on his young shoulders.

On paper, he was supposed to be too good for the U23 level. And he is. He is delivering. These games are just practice runs for him to get his legs under him. Amad is quite clearly a class or two above the PL 2. He is proving that he is a gifted, playmaking right-winger — the kind that United have been looking for — and first-team involvement now feels imminent.