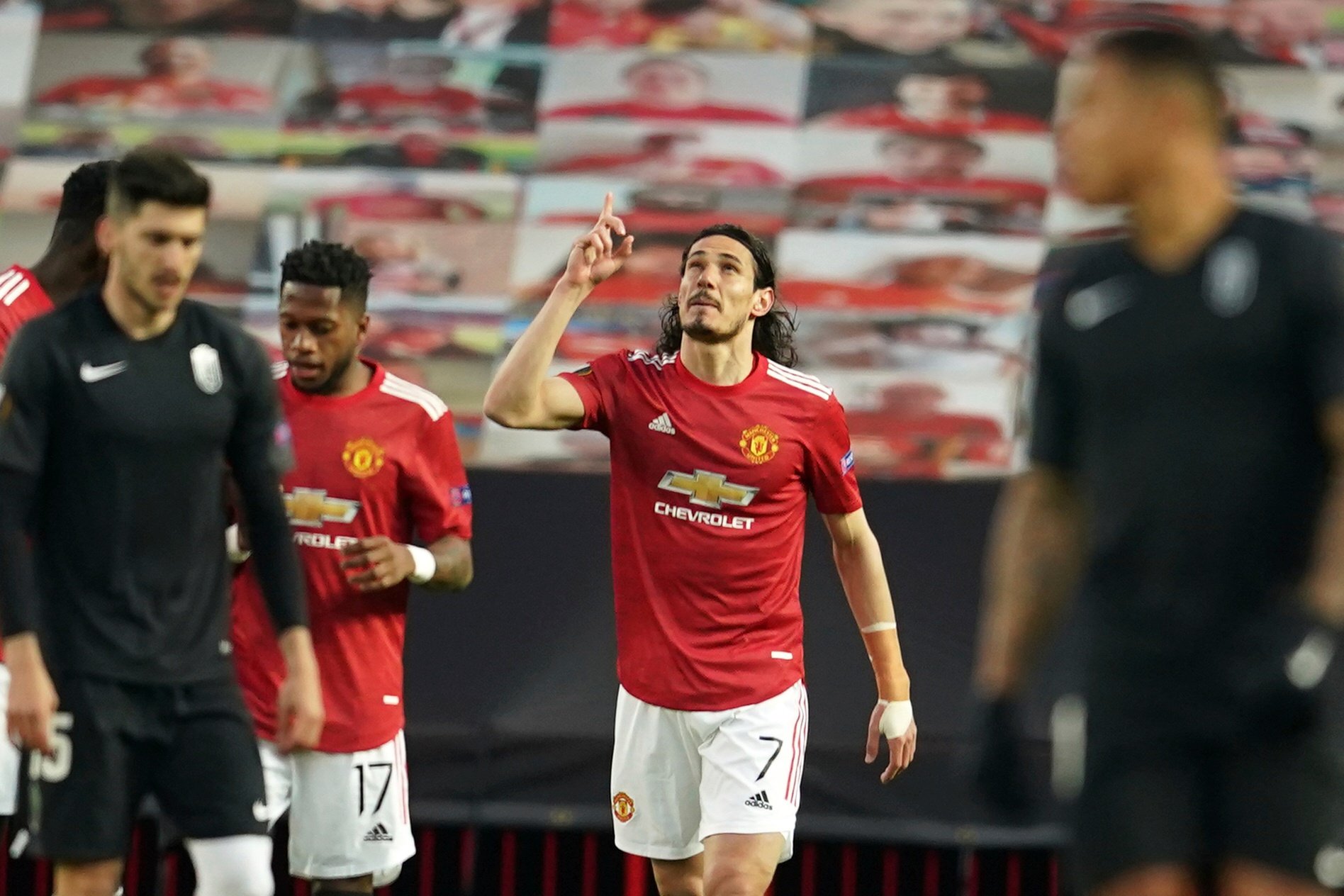 After bagging a comfortable 2-0 win in the first leg away from home, tonight was expected to be more of a formality than anything. Granada didn’t really threaten at all the first time out and were certainly facing an uphill battle to overturn a previously overpowering Man United.

Due to a number of suspensions, Axel Tuanzebe and Alex Telles came in to deputise captain Harry Maguire and Luke Shaw. There was some shuffling in the midfield too, as Matic came into the midfield for McTominay – still no start for Donny van de Beek though even with two away goals.

It is also worth mentioning that joining the other recent additions to the Europa squad – Amad Diallo and Anthony Elanaga – 18-year-old centre-back, Will Fish, was named in his first senior matchday squad. Yet another product of the youth academy being brought through. Football Heritage.

The game started off slightly scrappy and with neither side able to keep their foot on the ball in the first few moments. The Spaniards started with plenty of energy, clearly looking to rise to the occasion and not just roll over for the Reds, but the home side quickly asserted control and set the tempo.

There should have been an easy goal within the first five minutes, as a simple break saw Bruno play a ball to Cavani on the right-wing, with the awaiting Greenwood needing nothing more than a slightly curled pass to have an easy one-on-one with the keeper.

It didn’t linger long anyway, as United quickly took the lead. The delivery from Telles was typically well-pitched and after a quick backwards header from Pogba, the ball was hit home with a simple yet lovely volley from Cavani in the 6th minute – his first European goal for the club. 3-0 and the Reds already coasting into the semi-finals.

Granada may have been leaving plenty of space in behind, but they were still looking to make the most of what little chance they had to progress. Just moments after the opener, Yangel Herrera nearly snuck in a surprise header into the right-hand corner as both de Gea and his defence looked a bit too casual.

Things kept ticking over fairly patiently from then on, up until the 17th minute, when Pogba picked up an extremely questionable booking. The Frenchman was enjoying an impressive run, managing to hold off three or four players, muscling them off and retaining the ball as he strode stubbornly through the midfield.

He was ultimately deemed to have used his elbow to shield the ball and penalised. Clearly frustrated by the situation, he looked like he might have lost his composure, lunging somewhat overzealously into a subsequent challenge. It wasn’t a second yellow but neither was the first – he was now looking likely substitution and had to toe the line for the rest of the half.

Granda’s game’s looked to be simple: give United little time on the ball and try to rattle them physically. It was working to a degree, as the pressing led to Herrera nearly netting the equaliser once again just moments later, with a slightly dipping header that brushed just past the same post.

There was then a series of cumulative fouls that followed the Pogba passage of play, and United look to seemingly pivot their approach in trying to draw a few fouls in order to reset and settle things down. There was some particularly filthy footwork from Greenwood in a tight space, who dragged the ball backwards, sideways and forwards out of trouble. Naughty.

Granada continued to chase United around the pitch and while they hadn’t yet made anything of it, they were still managing to close the ball down relatively quickly. That being said, the tenor of the game stayed tetchy and it was down to United to keep things calm and play the game at their own pace.

It felt like almost everyone was jumping into challenges at this point and players were hitting the deck on both sides throughout the first half. Granada had to substitute Gonalons just after 30 minutes – the veteran midfielder being replaced by Jorge Molina.

Fernandes nearly scored what could have been one of, if not the best of United career yet a few minutes later. After the ball was won back from deep by Cavani – showcasing his incredible work rate once again – a steady build-up began and following nice ball over the top from Matic, Bruno lashed the ball with the outside of his boot, curling just over the bar. A would-be belter.

Having served up the opening salvo and seen out intermittent attacks from the away team, United were now subjecting them to wave after wave of attack. However, while the transition from the defence to midfield was impressive, they spurned several chances as they entered the final third. This went on right up until the half-time whistle and although they had little reason to worry, it could have been three or four already.

The second 45 started as predicted, with the substitution of Paul Pogba for Donny van de Beek – Ole not looking to take chance with the midfielder and repeat the same scenario we saw with Fred not too long ago. Fans will be glad to see the Dutchman finally getting some more minutes, especially on an evening where they might have expected to see him anyway.

Granada also made a double change, bringing on Antonio Puertas and Luis Suárez (not that one) for Kenedy and Robert Soldado. While this would usually have exhausted all three changes, the five substitutions rule is still allowed in Europe this season.

The was a flurry of a couple of chances just four or five minutes into the half as both Molina and Greenwood nearly scored short-range headers after two good balls into the box. Mason definitely should have done better with his, in truth, but it’s been a pleasure to see him back amongst the goals.

Around ten minutes later, Cavani nearly had his second after a lovely lofted cross into the box from Bruno. Unfortunately, he got his timing just off and the ball hit him on the shoulder rather than his head. Nevertheless, the Uruguayan is always in the danger areas.

Arriving at the 60-minute mark, we saw Daniel James warming up, with the Welshman soon to replace Cavani, who – having already contributed – could also do with resting for the weekend. But just before that, a solo run from Greenwood nearly turned into an instinctive, long-ranged finish from van de Beek, who blazed just past the left upright.

In the period immediately after, Granada started to enjoy a slightly more positive spell for five or ten minutes. United defended some of the moves relatively well and did manage to ride out the pressure, but defender, Germán, could have given them a glimmer of hope around 65 minutes. The back four caught half-asleep once again.

In the 73rd minute, Bruno Fernandes (a consistent creator throughout the night) was the next to be given well-deserved rest, with Juan Mata replacing him on his first appearance since his late mother’s passing. Nice to have you back, El Mago. Granada also made their fourth change minutes later, with Víctor Díaz coming on for Neva.

United were comfortably in control now and after 82 minutes, Brandon Williams and Amad Diallo entered the game for Wan-Bissaka and Mason Greenwood – two other positive performers this evening. Granada also made their final change, hooking off the booked Germán for Nehuen.

It may not have been the goal-fest fans would have been looking for in a tie already put to bed, but as the clock ticked on, it was good to see the recent entrants into the game putting in real effort, running after the ball and trying to run the channels. Everyone looking to force their way into plans.

Apart from one long-range effort from Granada, there weren’t many chances to note at all in the closing minutes of the game. After United nearly dealt a counter-attacking blow through Amad in the 90th minute, who was cynically fouled on the break – the Ivorian robbed of a possible chance.

Rather ironically, the Granada got their just desserts mere moments later, as an end-to-end move featuring a good reflex save from de Gea was followed by a slightly comical sequence that saw the game put to bed (as if it hadn’t been for some time already).

Telles once again found himself putting service into the box and despite Mata getting glancing touch, it was Real Madrid loanee, Jesús Vallejo, who registered an own goal in the dying embers. 2-0 United with all the action, once again, at the beginning and the end. Job done.

United already had one foot in the next round but it was good to see them see a professional two-legged tie without conceding a goal and advancing to yet another semi-final under Solskjaer.

Though it was by no means a blockbuster of a fixture, but there were solid performances across the pitch: Pogba looking powerful and pulling the strings in the first half, more strong signs from Telles (still on fairly few minutes); another goal for Cavani and good to see van de Beek looking sharp in his 45-minute showing.

All that being said, it will come as no surprise that Bruno Fernandes has just pipped it for man of the match yet again. He may not have notched another direct goal or assist tonight, but his involvement in the goal was clear and wider creative contribution was as present as ever.

People have suggested he has been slightly out of sorts in recent weeks, but it’s good to see that even his minor dips in form aren’t true troughs and don’t last that long at all. Ole’s men march further toward a first trophy and it’s no stretch to say their Portuguese magnifico has played a vital role in keeping that possibility alive.

The semi-finals are looming for United now where they will face AS Roma who overcame Ajax to set up a repeat of the classic Champions League tie in 2007. The first leg at Old Trafford is set to be played on March 29 with the decider at Stadio Olimpico the next week.