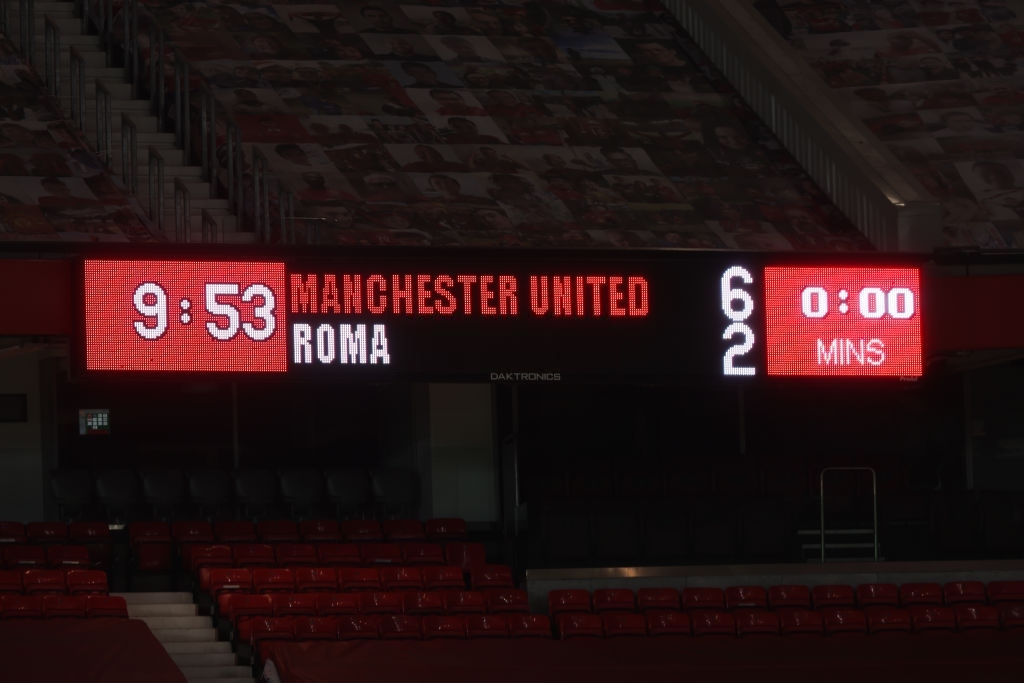 Stepping into tonight’s game, Ole Gunnar Solskjær and his men would be hoping to take the first step towards putting an end to their semi-final curse. It was his fifth as United manager and this competition presents the only real plausible trophy this season.

As such, Ole named a strong side, with only Mason Greenwood dropping out of the side and de Gea once again the favoured cup keeper – a strange sentence to utter nowadays.

We’ve had some unforgettable games against Roma: none more so than the iconic 7-1 in 2007, when United had arguably one of its best squads of all-time. Question is, would tonight be another one?

It wasn’t long before the first whistle blew that the next came, as within just a minute or two of kick-off, Roma’s Veretout looked to have strained something. He tried to play on for a few more moments, but within seconds he pulled up again and had to be replaced by Villar inside the first five minutes.

A nightmare start for Roma, already having used up one of their substitutes (though five are still available in Europe) but, arguably, an ideal start for United, who would look to prey on the Romans having to restart their rhythm. It soon got better as it didn’t take long for the Reds to take the lead.

In the 9th minute, Pogba received the ball and rolled his man, before dragging the ball inside and shifting his way through two or three defenders. After squaring the ball to Cavani, he played a defence splitting diagonal pass, leaving (guess who) Bruno to cheekily chip the keeper. 1-0.

Though it seemed like things couldn’t have begun better for United, just four minutes later, Roma salvaged something out of a sloppy counter-attack. As the ball rolled out to the right following a miss-kick, Pogba stood up Karsdorp and after sliding to screen the cross, the ball struck his arm on the way through. Penalty. Harsh isn’t even the word.

It was a ridiculous decision: beyond questions of natural position and intent etc. – he simply slid to stop the ball flying into the box and was penalised for having hands. Though de Gea guessed the right way, Pelligrini’s spot-kick was too powerful. 1-1 and a game on our hands already.

The next ten minutes were all about resetting and not allowing early injustice to get under the skin and allow frustration to overcome focus. United’s forward players didn’t seem phased, though, breaking fast down the wings and looking fluid in attack – plenty of threat but with no final thrust just yet.

There were chances for Bruno, Wan-Bissaka, Pogba and Wan-Bissaka by the 25th minute – the two lattermost seeing Roma’s keeper, Pau López, forced off for Mirante, after it looked as though he dislocated his shoulder when landing after the save. Another injury and another sub spurned.

One problem that did look to be playing a part was the rain, the slick pitch seeing several players on both sides slipping up at key moments. As such, transitions in the midfield weren’t as swift, with players having to adjust their speed and a fair few misplaced passes.

United looked to be all over Roma for some time, enjoying confident build-up and with more than double the number of passes made by the Italians and plenty of penetration. But despite having the ascendancy, the next goal came against the run of play.

They broke with Spinazzola on the right and the ball came to Mhkitaryan; playing a clever acute pass in behind the defence to find Pelligrini, he squared the ball for former City man, Dzeko, to scramble in. 2-1 Roma. From good to bad to worse.

Ironically, it was the co-creator Spinazzola that became the third victim of injury within just 37 minutes, being replaced by Bruno Peres. Roma now haemorrhaging players, they still somehow found themselves in the lead and United were already looking at having to score their way out of this one. Premonitions of a 2007 repeat?

As the game approached the break, the chances started to dry up and the second goal had clearly upset the momentum that the home team were enjoying for the first 25 minutes or so. United will no doubt have wanted to just put that first 45 behind them now.

The pundits in the studio and at Old Trafford said they surprised there were no changes at the start of the second half but, in truth, United weren’t that bad. That being said, there are plenty of arguments to say the ‘McFred Pivot’ is a bit too conservative, especially at home.

Luckily, it only took the home side two minutes to get their equaliser. Pogba played a simple ball down the middle of the park to Cavani, sitting almost like a false nine. After he released the ball to Fernandes, the Uruguayan darted toward the box and the Bruno returned the favour, as the number seven struck a truly delicious curled effort into the top right. Sublime. 2-2.

Decision making on the referring side of things continued to baffle almost immediately following the goal, as Pogba picked up a yellow card for simply chasing down the ball as the keeper came to collect. Virtually no contact, just wanting to make him panic.

A minute or two later, it looked like Cavani might have had his second after a pull-back from Shaw was left by Bruno, but he saw the ball too late and leant back, skying it over the bar. A finisher of his quality scores those nine times out of ten.

The chances were coming thick and fast now and United making sure to force the issue in this first 10-15 minutes of the second half. With Pogba driving through the midfield and Bruno’s providing consistent delivery into the box, you sensed that the next goal was coming.

McTominay was nearly the supplier twice: once with a hopeful header and again with a much bigger opportunity, as Pogba played it past the last man and the Scot needed nothing more than to strike – sadly, he chose to square it blindly and the

Then, in the 64th minute, United finally reaped the rewards for persistent pressure. After Shaw did well to recycle a move on the left flank, he played the ball back inside to Pogba, who then moved it on to Bruno, who just managed to play the final pass to Wan-Bissaka waiting at the back post.

His shot was tame but the save wasn’t enough to keep Cavani from snuffing out the second ball, as the natural striker put away a poacher’s goal – his second of the match. He is simply inevitable at this point. 3-2

Only a few minutes later, there was yet another twist in the tale as United were awarded a penalty of their own, thanks to a follow-through from Smalling, of all people. Rashford brought down the ball and played short to Cavani, who went for the backheel, but it ultimately didn’t matter.

Having been prolific all game, United’s Portuguese Magnifico stepped up to slot home yet another goal in his remarkable campaign. 4-2, ‘Penandes’ strikes again and United having done tremendously well to turn the tide back in their favour so quickly.

The point was rammed home even further in the 75th minute when United got a fifth. Fernandes at the heart of everything as always, he played a lovely floated cross into the box, which Pogba headed home confidently. 5-2 – another goal for the flourishing Frenchman and yet another assist for Bruno. Much more Man United now.

Absolutely teeming with confidence at this point, the game became a matter of how many could they score. Just as the camera showed Greenwood getting ready to come on, Cavani nearly got his hat-trick with an even more audacious overhead attempt. He was ultimately offside but just imagine.

With around 10 minutes to go, Rashford was eventually replaced by Greenwood, followed by Matic on for Fred in the 83rd minute. A slight shame Ole didn’t go for Amad or yet another attacking change, United having already been ruthless in this second half.

In fairness, it turned out to be a case of our eyes being bigger than our belly, as just three minutes later, Cavani (utterly immense all evening) played a wonderful outside of the boot pass over the defence to find Greenwood running on to it. He didn’t have to do much else other than hit it – even the keeper’s block couldn’t stop it. 6-2 for the second time this season.

The two-legged tie as a whole very much to put to bed already, Ole saw fit to give Juan Mata a small cameo, replacing Bruno, who was back to his absolute best tonight: absolutely everywhere and his customary penalty to top off a creative masterclass. Seeing his smiling face was almost the last action of the game, as the whistle blew to round off a wonderful evening.

Yet another unforgettable night at Old Trafford against Roma for United. While an ‘eight-goal thriller’ would usually suggest an end-to-end game, it only felt like that for the first half. Make no bones about it, it was an absolute demolition in the second and truly a performance fitting of a Sir Alex Ferguson side.

In terms of standout players, there were top performers all over the pitch: Shaw, Pogba and Fernandes all superb. While Bruno and Paul’s contributions were all incredible, you can’t ask any more than scoring two and assisting two can – Cavani takes it.

it seems strange to think that some people doubted whether or not the 34-year-old’s singing was a wise move – myself included in that – but there aren’t many players left who embody the definition of number nine. Simply unstoppable and a shame he couldn’t get a third to top it off.

We don’t want to jump the gun but… See you in the final – at last!