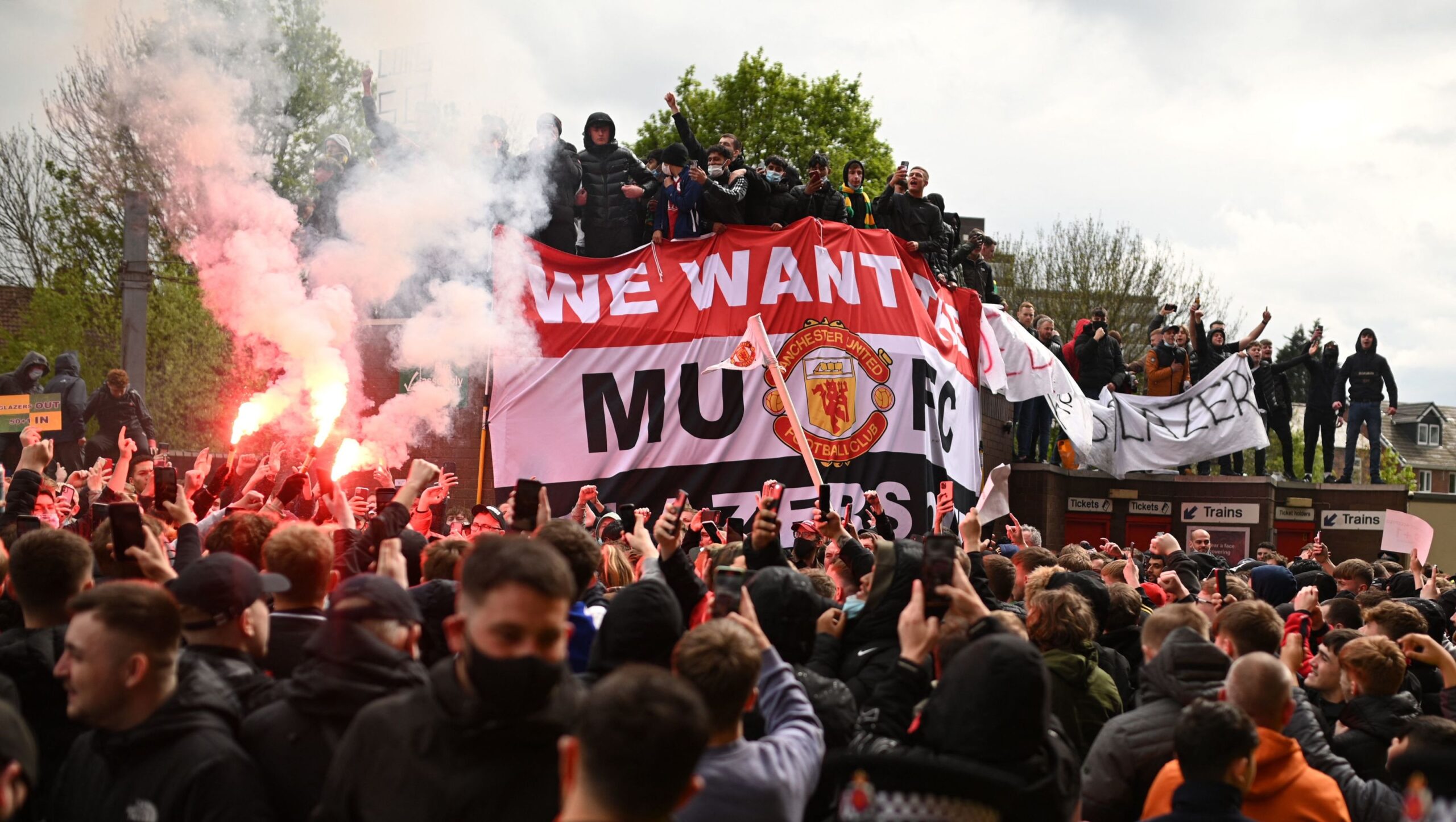 Sunday 2nd May 2021, remember the date because it may well go down in Manchester United history. It was the day that thousands of Manchester United fans of all ages, races, religions and genders descended on Old Trafford in unity to protest against the club’s owners, the Glazer family. Although there have been numerous protests and marches against the Americans since they bought the club (with a loan that was then lumped on the club upon purchase), Saturday felt like it was 16 in the year making.

The protest was organised impeccably by United supporters groups and it became clear pretty quickly that the plan was to get the biggest fixture in English football called off. A group of supporters congregated at the Lowry Hotel, where the team stays before every home fixture, while the rest marched on Old Trafford with green, yellow and red flares.

The group at the Lowry stood their ground for over five hours, preventing the United players, who watched on in amazement from their hotel rooms, from getting on the coach that was waiting to take them to Old Trafford. Despite the best efforts of the police to move the crowd, they failed and the players and staff were stuck there with no way out.

Meanwhile at Old Trafford, United fans broke through the barriers that were meant to keep them away from striking distance of the stadium and marched towards the Munich Tunnel. The tunnel is there to commemorate the busby babes and the eight players who perished in the Munich air disaster in 1958.

The babes were in pursuit of the European Cup when disaster struck on the runway in Munich 63 years ago, the same European Cup that the Glazer family tried to take the club away from two weeks ago so it was perhaps appropriate that the protest headed in the direction of where those eight legends are remembered.

Chants of ‘we want glazers out’ were pounded out by the red army and the Old Trafford forecourt was swimming in banners that detailed just how much damage the parasitical owners have done to the club over the past 16 years.

Shortly after, a group of United fans managed to gain access to Old Trafford. It’s still unclear as to how they managed it, with some videos showing them forcing their way in and others showing stewards on the inside letting them in. Either way, they got in and headed to the pitch to continue the protest there.

The majority of those who made it on to the pitch continued to protest in a peaceful, but direct way, despite what Sky Sports and other sections of the media would have you believe. Yes, there was one idiot who decided to smash up some television equipment but if that’s your main take away from the protest then maybe have a rethink and educate yourself.

As time ticked towards the scheduled kick off it became apparent that there was going to be no football played in Manchester that day. However, the police at Old Trafford decided that this was the most appropriate moment to start throwing their weight around. Not when the stadium was occupied, not when the barriers were breached but when United fans had secured their biggest victory of the season and were ready to make their way home.

Some ugly scenes followed and one police officer did suffer a gash across his face, which is inexcusable. However, what is also inexcusable are the videos doing the rounds on social media of police officers dragging fans along the ground and punching defenceless protestors in the head. Policing in this country has taken a battering in recent months and there really does need to be a rethink on how they police mass gatherings. Again though, it’s only fair not to group all police officers into the same bracket and a lot of them deserve credit for how they acted on Sunday.

There have been some wild takes on the protest over the past 24 hours from ex-players who are so out of touch from football fans it’s scary to rival fans who can’t seem to separate themselves from tribalism to understand that if the Glazers are booted out of Manchester then the football pyramid in England will be much more secure. There are even some City fans who have created a conspiracy that United fans protested so they couldn’t win the Premier League title on Sunday. Cute.

Going forward, there is still work to be done to get the Glazers out of Manchester. The Manchester United Supporters Trust issued an open letter to them on Monday morning revealing four key issues that need resolving. The demands were as follows:

1. Willingly and openly engage and promote the government initiated fan-led review of football and use this as an opportunity to rebalance the current ownership structure in the favour of supporters

2. Immediately appoint independent directors to the board whose sole purpose is to protect the interest of the club as a football club, not its shareholders

3. Work with the Manchester United Supporters Trust and supporters more broadly to put in place a share scheme that is accessible to all and that has shares with the same voting rights as those held by the Glazer family. Should the appetite be there amongst fans then you should welcome, and offer no opposition to, the Glazer Family shareholding being reduced to a minority or indeed being bought out altogether.

4. Commit to full consultation with season ticket holders on any significant changes to the future of our club, including the competitions we play in.

Should the Glazers not respond to the letter in a meaningful and progressive way then expect the protests to continue. There is already talk of another protest on the weekend of the 15th May, when the Liverpool fixture is expected to be rescheduled for.