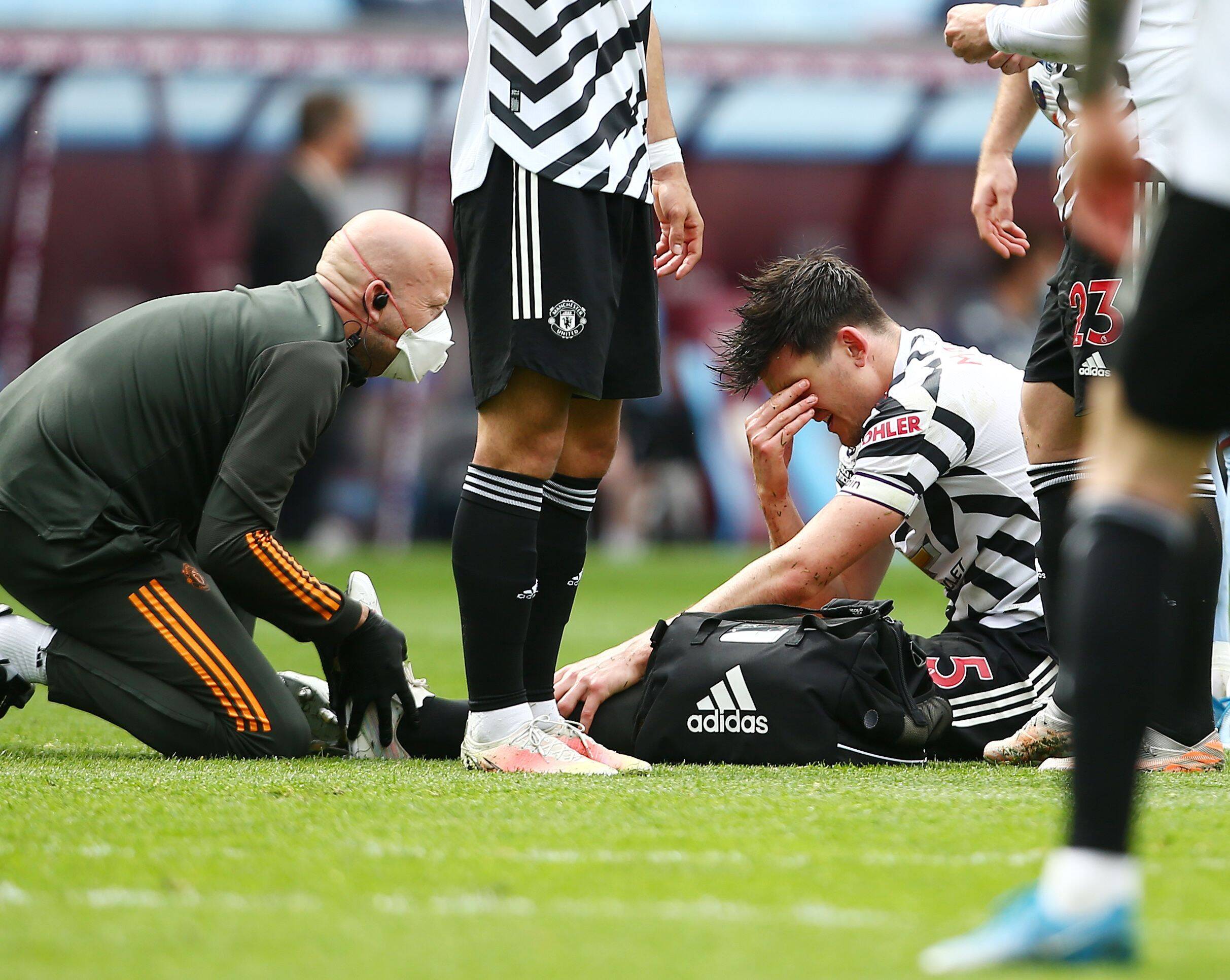 Manchester United — even with Harry Maguire — have collectively struggled with defending set-pieces over the last couple of years. But the captain’s absence, through injury, against Liverpool on Thursday night showed just how valuable he is to the team’s success.

You can add Tuesday’s loss against Leicester to the equation too. The chaotic and unorganized defending was at times reminiscent of United pre-Ole Gunnar Solskjaer. Before this week, United had lost the least games in the league (4; now 6). Last season, the Reds boasted the best clean sheet record in Europe’s top five leagues.

But also up until this week — and all through last season — Maguire had played every minute of every Premier League game since signing for the club. The almost club best record ended at 72 consecutive starts as the skipper was forced to come off in the second half of United’s victory at Villa Park last weekend due to ankle ligament damage.

It was a freak incident as the 28-year-old was simply in the wrong place at the wrong time when an Aston Villa player tumbled over and collapsed on top of Maguire’s ankle when United’s No. 5 was not ready for the impact.

Emerging from the stadium sporting a protective boot after the game, the initial prognosis did not look good. Days later, now that we know more, many are still skeptical that Maguire will heal up in time to lead the Reds out in Gdansk, Poland for the Europa League final in just under two weeks — his and Solskjaer’s first final since the pair united at the club in the summer of 2019.

With that, the last two league games — both defeats — gave United fans a taste of life without their defensive pillar.

Granted, the game against Leicester may have gone the way it did anyway due to the forced heavy rotation, but Solskajer already admitted that Maguire was going to extend his incredible record of never missing a league game in that fixture had he not gotten injured. So, who knows? It certainly would have looked better than it did.

Without the captain, Axel Tuanzebe and Eric Bailly got the start against the Foxes on Tuesday and capitulated just 10 minutes in, after the former got dragged out of position and re-organizing the backline on the fly became an impossible task against a quick and deadly move from the visitors.

There was a visible lack of assurance about that makeshift back four and an audible lack of leadership. For all the things that people like to hold against Maguire, him barking out orders can by consensus be heard from all the way down the road to every stadium he plays in.

On Thursday, against arch-rivals Liverpool, Maguire’s regular partner returned to the fold to partner Bailly, and things looked better at first — until they didn’t. Lindelof looked to take charge more. He had the defense organized quite well for the first 30 minutes, albeit United were getting pulled apart and in recovery mode on almost every counter-attack the visitors embarked on.

Then, once minute 34 struck on the clock, the downfall began, and — in fighting terms — the partnership at the heart of United’s defense began to tap out. Diogo Jota was on hand to flick in the equalizer as United failed to deal with a corner — surprise, surprise. And from then on, it felt like every set-piece for the no-longer defending champions could have ended up in a goal. In the end, one more did — and Leicester also scored the winner on Tuesday after catching United out from a corner.

As a result of the fixture congestion, not enough time on the training pitch, and whatever other reason — United simply failed to address this problem throughout this campaign and it has proved costly on many occasions. But with Maguire, they at least look capable.

Averaging 2.5 headed clearances per game and 4.23 aerial duels won p/90 in the Premier League since signing for £80 million before the start of last season, Maguire contributes hugely to keeping the aerial danger out of United’s box. The latter ranks Maguire in the 96th percentile in his position in the world. It is an elite and underrated quality.

Many people seem to have an issue with the price United had to pay to get the former Leicester defender to Old Trafford — like it’s his fault. Admittedly, it’s a little inflated as a result of the current market, but the qualities that the Englishman has brought to United are invaluable.

First of all, availability — which is the most underrated quality in football. The days of Chris Smalling, Phil Jones, and Eric Bailly nursing knocks on the sidelines and providing managers with selection headaches feel long over, even though it has not even been two full seasons yet.

Maguire is always ready to play. Just for context, in the time that the Englishman has made 72 Premier League appearances for United, Bailly has made 15.

Last season, United’s captain played through a hip issue — with the aid of pain-killing injections — proving that he is a worthy leader and willing to go to the extremes to defend the badge.

This season, with the insane scheduling and virtually no midweek’s off, there have undoubtedly been knocks and issues here and there. But one thing remained unchanged, the skipper always reported available to play. That’s how you lead by example and motivate others to reconsider the availability of their own.

Additionally, Maguire is excellent with the ball at his feet. Prior to the arrival of Bruno Fernandes, United still struggled creatively, but Solskjaer’s side managed to stay within touching distance of the Top Four with the likes of Andreas Pereira and an out-of-form Jesse Lingard as the chief creators. Maguire’s ability to play out from the back and carry the ball helped a lot.

Maguire completes 5.65 progressive carries p/90 and boasts an average pass completion rate of 89 percent. He doesn’t lose the ball and can move it up the pitch in order to create overloads and drag opposing players out of position to free up space. Maguire’s passing range for a big center back is also underappreciated as he completes 4.4 long balls per game.

United are still far from perfect defensively. That’s promising if you consider how good they already on a European scale, and then think about how good they could still become. The common factor of United’s defensive success though, no matter the partner, is Maguire.

Everyone is allowed bad games and rough patches of form. But the truth is, ever since he experienced a bumpy settling-in period at United, Maguire has been extremely consistent.

Granted, he does have his limitations. To the naked eye, only one stands out and that’s his lack of pace. Maguire makes up for it with his ability to read the game quite well, but Bailly at times has shown how much of a difference a quick partner can make in complimenting him. It’s a minor issue that is an easy fix.

Otherwise, perhaps United fans needed a week like this to fully appreciate what Maguire brings to the table and to recognize just how much of a hand he has had in the defensive transformation under Solskjaer.

Maguire’s arrival and eventual captaincy takeover saw United go from a side that is extremely fragile defensively to a formidable unit that is quite hard to go by unless they self-combust.

Set-pieces, lapses of concentration, and footballing limitations have been their undoing, but United are never out of games these days. The backline led by Maguire makes sure that if the attack is firing, there is always a way back into any given game.

Maguire’s physical presence has made it more difficult for center forwards to play against United and his vocal presence ensures that his teammates and opponents know that he is always there.

Luke Shaw knowing that Maguire has his back on their side of the defense may too have been a contributing factor in the left-backs resurgence. The captain’s calm but commanding presence has helped everyone go up a level in their performances. Bruno’s arrival then took it up another notch. That’s the impact that leaders have.

Maguire is a ‘proper’ center-back that United have needed for years. A pillar to the defensive spine, a leader at the back.

Having gotten used to Maguire always being back there no matter what — the prospect of life without him does not seem so good. And after getting manhandled two times in the space of three days, United’s backline will desperately hope that their captain wins his race against time and makes it back in time to wrap the armband around his bicep one more time this season in Gdansk.

Luke Shaw’s resurgence has overshadowed the rise of brilliant Aaron Wan-Bissaka
The Super League threatened mental health, whether you realise it or not
To Top