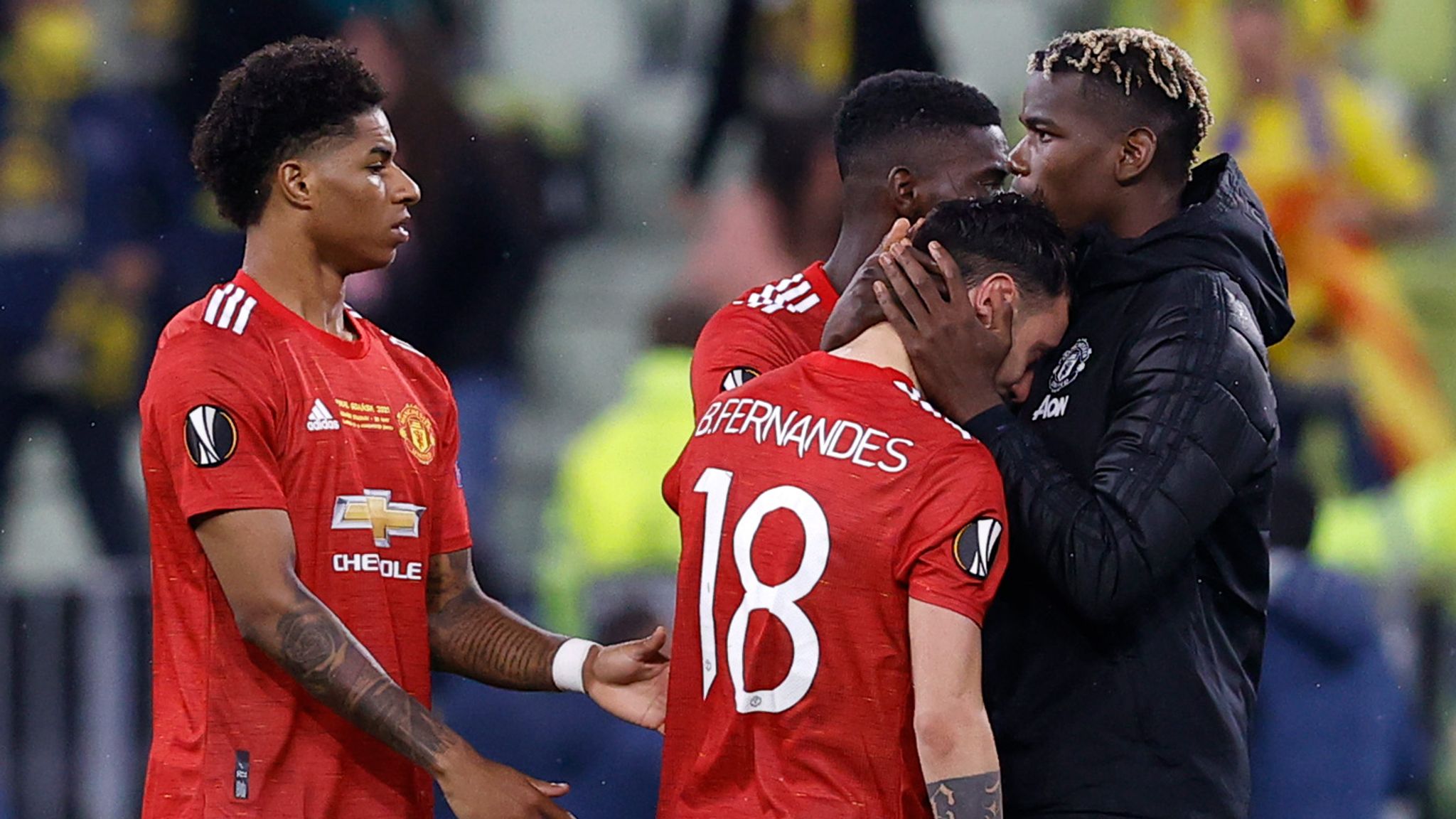 At times, the 2020/21 season felt like it was never going to end. It was filled with more ups than downs as the Ole Gunnar Solskjaer rebuild of Manchester United continued on its upward trajectory. But it was a relentless campaign that did not end how it was supposed to.

The Reds started the season awfully but managed to claw back and comfortably secure second place in the Premier League — making it the first time post-Sir Alex Ferguson that a United side will play Champions League football in consecutive seasons.

There were injuries, there were moments of adversity, outpours of joy but perhaps most importantly, the belief came back.

United hung around first place in the league for a moment. They stayed on the eventual champions’ tail for as long as their quality in depth allowed them to. And in the end, though they failed domestically, the Reds had a chance to accentuate their progress under the Norwegian with European glory.

Albeit in the second tier of European football, a penalty shootout separated Solskjaer’s side from their first piece of silverware together — something that during a rebuild is not always the most important, but can be impactful by injecting the taste of success into the players.

Solskjaer himself confessed that United’s treble-winning season back in ’99 did not make any of the players better per se, but it made them want more. United won three league titles on the bounce in that time and it was all initiated by the success of that season.

Lifting the Europa League trophy for the second time in the club’s history could have directed Solskjaer’s side in a similar direction. But whether it would have will forever remain a ‘what if’. United battled in Gdansk, Poland on Wednesday night, but they just didn’t have enough.

After finally snapping the semi-final curse, the Reds went behind in the final against Villarreal — in very familiar fashion — in spite of appearing to be in control of proceedings. United really looked good at times. And after Edinson Cavani latched onto a loose ball to smash home the leveler early into the second half, it felt like Solskjaer’s side was going to do it again.

Having earned 31 points from losing positions this season, it was almost written in the stars. United had all of their big guns on the pitch and the Spaniards — debuting in a major final — looked a little unsettled.

Unfortunately for the Reds, the winner didn’t come and the penalty shootout lottery did not go in their favor. David de Gea — who may very well have played his final game for the club — failed to save any of Villarreal’s 11 spot-kicks and missed the only one of the shootout, in sudden death, to send his countrymen into a frenzy.

“We didn’t play as well as we know we can do,” Solskjaer told BT after the game. “I think we started alright, they got the goal – the only shot on target, they score. Disappointed we concede a goal on a set-play again of course. Now is not the time to point the finger at what I’d have done differently. But when you come out without the trophy you haven’t done everything right.”

United as a club never aspire to be in the Europa League. But once you’re there, you want to win it. A trophy is a trophy. It is an opportunity to forever etch your name in the history books. Therefore, it is no surprise that the players looked particularly deflated.

Overall, United had a very good European campaign despite crashing out of the Champions League at the group stage. The Reds were formidable in the Europa knockout stages and all but cruised to the final. They could feel the golden finale. A victory in Gdansk was going to validate the process that is being overseen by Solskjaer and his staff.

Losing one game doesn’t change anything in the grand scheme of things, but it sees an overall solid campaign end in disappointment. The strides made this season all of a sudden feel a little bittersweet. The players are visibly starved of success in the shape of silverware. Many refused to keep their runners-up medals around their necks.

Some will say that’s being ungraceful in defeat. To me, that’s showing loftier ambitions. It’s a positive sign in a squad that can sometimes come across as mentally incapable of handling the big occasions. Teams that win serially are not popular or known to be nice guys. Not accepting second place is a sign of dissatisfaction that can be channeled into something positive in the future.

And speaking of the future, what does this defeat mean for this squad?

Well, for the most part, Wednesday night once again emphasized the things that we’ve all known for quite some time: the current squad is good, but not great. United are not that far away from being back to winning ways, but there are no shortcuts on the way to the top.

Solskjaer fielded a very strong, attacking squad against Villarreal that should have beaten the seventh-best team in La Liga. They played well enough to beat them but couldn’t create enough. And when came the time to consider making some changes, or even just freshening things up and proposing some new ideas, the United boss looked to his bench and saw few appealing options.

With Cavani, Bruno, Paul Pogba, Marcus Rashford, and Mason Greenwood all on the field, United’s attacking options on the bench consisted of an aging Juan Mata, Daniel James, an 18-year-old Amad, and Donny van de Beek — a player whose best position at United is still unclear.

And even if Solskjaer did make subs earlier, as many wanted him to, who do you take off? During a one-off cup final and with football being a game of moments, there were no obvious choices.

Granted, the likes of Rashford and Bruno — to name a few — did not have the greatest of evenings. But even on bad days, they are moments players that are capable of producing that one piece of magic. Once you take them off, there is no going back. And looking at the bigger picture, they are also good penalty takers — something that you have to keep in mind as a manager in a final.

And his is not to say that Solskjaer shouldn’t have taken a risk or two. Sir Alex just gave a great interview last week in which he said that when your back is against the wall and you’re chasing a game, you have to be courageous, take risks and send bodies forward. It doesn’t always pay off, but when it does, there is nothing quite like that feeling of winning right at the death.

Solskjaer didn’t do that. He was perhaps too calculated and only started to make changes with the eventual penalty shootout in mind. But with a deeper bench, such that the likes of Manchester City or Chelsea possess, we can’t be sure if he wouldn’t have made quicker adjustments. And this all comes down to the initial point: this squad still needs work.

United are headed into a very important summer. Going into year three of Solskjaer’s contract, the Norwegian has gone as far as publicly admitting that he needs two or three additions to strengthen his side ahead of what many are hoping will be a title-challenging campaign next season.

The current squad is filled with many valuable assets, but a lot of them are not week in, week out contributors. There are still too many role players getting starter minutes and that needs to change. United desperately needs first-team quality to come in which would as a result strengthen the bench.

And as for the players that will stay and continue to be key next season, they cannot let their heads drop. For the likes of Greenwood and Bruno, it was their first final as United players. They were visibly disappointed and the latter even teary-eyed. But success doesn’t come easy. And once it does, the times of adversity along the way make it taste that much better.

Marcus Rashford — one of the more heavily criticized players after the final — gave a very powerful, heartfelt interview after the final whistle. You could hear the pain in his voice. But alongside the pain, there was also fire. He was sad but also angry and determined. He clearly voiced his frustration while also reiterating his and his teammate’s ambitions.

“For me, the club, the desire, the hunger the talent, the ability, the squad — we have everything to compete at the highest level. We just have to show it to the world,” Rashford told BT Sport. “When Ole came in, there was a process. The players, we believe in the process and this isn’t the end of the process. Part of the process is having ups and downs.

“I promise you, I promise the fans, we don’t give up. There’s no chance that we give up.”

If those powerful words from United’s No. 10 reflect the feelings of the whole dressing room and can be channeled into energy and desire on the pitch next season, Wednesday’s loss can still act as a springboard to success. But now, all eyes are on the board and the transfer window, as those in charge too need to align their ambitions with those of the players and the manager.

“The club, the desire, the hunger, the talent, the ability, the squad. We have everything to compete at the highest level.”

That one hurt Marcus Rashford.

A passionate post-match interview where he holds nothing back…