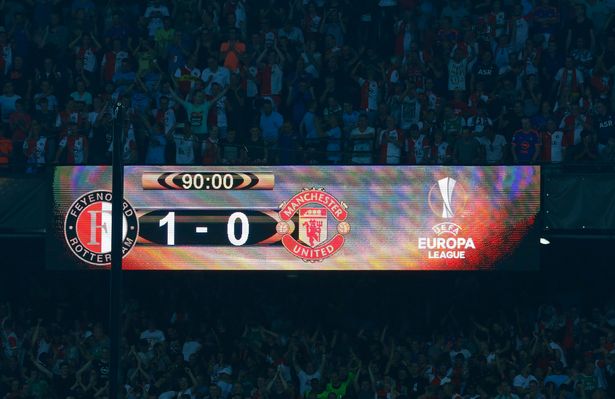 Manchester United started their Europa League campaign for the season on Thursday night against Dutch side Feyenoord, and were beaten 1-0 thanks to a 79th minute strike from Tonny Vilhena. Here are five things we learned from the defeat:

Both Marcos Rojo and Matteo Darmian were given starts against Feyenoord, opposed to the usual pairing of Antonio Valencia and Luke Shaw. However, all did not go to plan for the full-backs, especially Rojo. The Argentine defender completed none of his four attempted crosses, had a 0% tackle and aerial duel win rate, while also committing two fouls in the process. Darmian broke up the play well at times, yet his sloppy distribution led to Feyenoord easily regaining possession after he won the ball. I very much doubt Mourinho will pick either player for the game against Watford on Sunday, and we might not see them for a while based on last night’s performances.

Pogba needs to keep it simple for now

Another lacklustre performance from the world’s most expensive footballer left United fans scratching their heads, and even Pogba was clearly frustrated with himself at times. The 23-year-old is simply trying to do too much. He needs to simplify his game, especially when paired with Schneiderlin in midfield, who struggles with his distribution. United brought Pogba to act as the engine of the midfield, and his powerful running with the ball can be a joy to watch, yet I do not feel as if he has properly found himself yet in this side. However, there is plenty of time to go this season, and I am sure he will click soon.

Memphis is way out of the picture

Poor Memphis Depay. Many predicted the Dutch winger to start against Feyenoord, yet the 22-year-old was still utilised from the bench. It seems a long way back for a player who was once described as one of Europe’s hottest prospects. His link-up play looked decent last night, but he severely lacks a finishing touch and looks lost when striking a dead ball, something he used to genuinely excel in. Maybe it is time to look elsewhere in January, a real shame for a forward who can be devastating on his day.

There is still a hangover from the Louis van Gaal era

The defeat to Feyenoord seemed awfully familiar to the Manchester United fanbase. There is clearly residue left from the former coach, Louis van Gaal, and it may take José Mourinho a while to snap his players out of the ‘philosophy’ the Dutchman implemented at Old Trafford. United had the lion’s share of possession, a handful of efforts at goal, but no real chances, with the tempo of the away side’s play seeming rather sluggish at times.

No need to panic

Rome wasn’t built in a day, and a football team is even harder to build. Despite United losing their last two games, there have still been positives to take from each fixture. José Mourinho is still toying with his system, weighing up whether to use a 4-3-3 or a 4-2-3-1, and has the mammoth task of breaking his team loose of the chains placed by Louis van Gaal. This will take time, and there is plenty of time left to go in what will be a very interesting season.