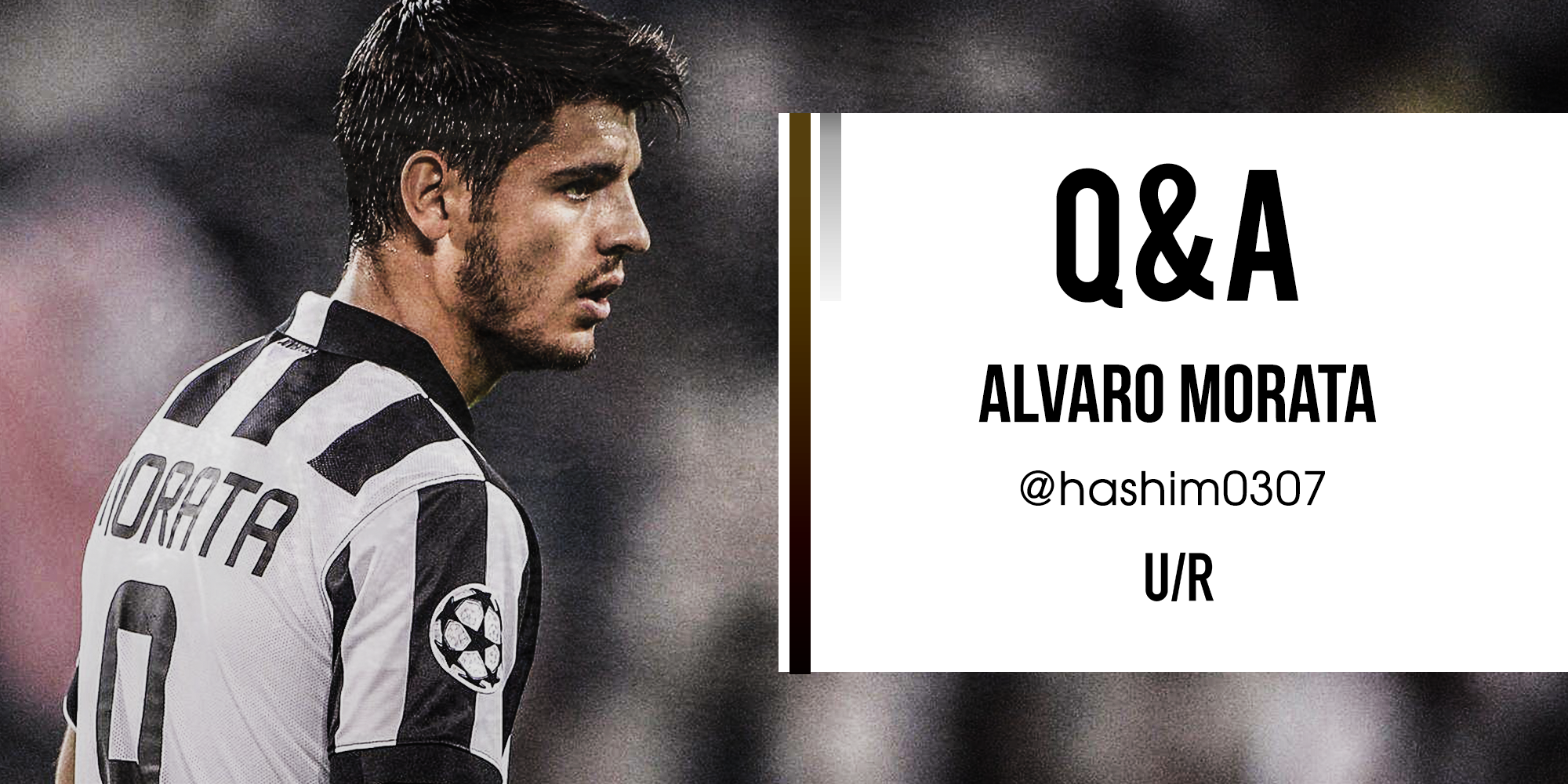 According to many reports, it seems as if Alvaro Morata is on his way to Manchester United for a  €70 million fee from Real Madrid.

This is a huge fee for any player, but it seems a bit excessive for a player that spent a lot of time on the Real Madrid bench last season, although he did end up as Real Madrid’s second top goal scorer, behind former Red Devil Cristiano Ronaldo.

Not many Manchester United fans are familiar with Alvaro Morata’s career and his footballing ability, but we aim to change that with this interview with Juventus fan, Hashim – he is also known as @hashim0307 on Twitter. Hashim has watched him consistently throughout his two years with the club. During this time, Morata had moved away from Spain and matured, returning to Madrid a greater player and a bigger person. We spoke to Hashim about his time at Juventus and talk about what we could expect and how Morata settled in with the Old Lady.

UR: Thank you for talking with us Hash. Could you please tell the readers more about yourself and what you do?

My name is Hashim, and I work as a consultant in Norway. I am a Juve fan and follow Italian football very closely.

UR: As you may have seen, Manchester United are firmly linked with a former player of yours, Alvaro Morata. What could United fans expect from the Spaniard?

If Morata signs for United I think you can expect a player who bleeds for the shirt. He played for Juventus only two years but he made an incredible impact, and although the club replaced him with a €94 mill Higuain, Morata is still sorely missed. He is a guy who cares about the club and the fans. You would always hear stories about fans in Turin meeting Morata randomly and end up eating dinner with him. I think the United could quickly fall in love with him.

UR: What are Alvaro Morata’s strengths and weaknesses?

Morata’s strength is his technique, control and finishing. He is so strong on the ball and has the ability to set up his teammates and creating space. He is a clutch player and loves a big game. He loves to play in the Champions League, and that’s where he shows his worth.

He is quite versatile and can find himself working with different types of players. In his first season with Juve he had Tevez as his partner, but when Tevez left, he had to adapt to totally different players in Dybala, Mandzukic and Cuadrado. He had to not only compete for his place but also find a way to play together with these players. I still remember him setting up Cuadrado in Munich against Bayern Munich. That goal sums up what kind of a player he is. If you haven’t seen it, look it up on Youtube, and you’ll see how strong he is.
UR: Assuming you haven’t lived under a rock for the last few days.. Manchester United have released former Juventus striker Zlatan Ibrahimovic. In your personal opinion, do you think he could replace Zlatan? Morata doesn’t have an outstanding goal scoring record compared to most strikers. If United were to rely on him for goals, could he deliver?
Morata and Zlatan are two totally different type of players. Zlatan is an absolute leader, and a dominant force in the locker room as Morata is a bit shy and focuses mostly on his own work. I think United will miss Zlatan’s mental strength and impact on other players. Morata can’t make the same mental impact as the Swede. Although Morata’s scoring numbers were low in Italy, there were reasons to justify them. The defence in Italy compared to England, and Spain is more compact and tactical, and he often started on the bench. You can see his numbers from Real Madrid’s season to see his efficiency. He has started maybe only 15 times, but still, has scored a decent number of goals and been involved in goals coming from the bench. People often like to compare his statistics with Lukaku, but Lukaku has started for a mediocre Everton team and hasn’t had anyone to compete against while Morata has competed with Benzema, Ronaldo, Tevez, Llorente, Mandzukic and Dybala over the years and still delivered every season. Surely there must be a reason why PSG, Milan, Chelsea and United are after him?
UR: The reported fee is around €70 million, which is a large fee for any player. Real Madrid exercised their buy-back clause for only €32 million just last year, and he has spent the majority of the season on the bench. Somehow, Madrid are demanding over double the price they bought him back for?
Real Madrid are the masters of selling players. There is no doubt about it. They can sell their bench players at a higher cost than most teams’ first team players. They know teams like United have a lot of money and Madrid have quality players. They will squeeze every penny out of United as they can. The problem becomes whether the player can cope with the pressure of costing so much. Pogba struggled with it and I personally think his mental strength is stronger than that of Morata’s. The risk United are taking with Morata won’t be if he can score goals or not because that is not an issue for him. He has scored in Italy, Spain and in Champions League. What United must consider is whether he will be up to it mentally. Will be he able to play without thinking of the pressure of his price tag? Time will tell. I think he will do well.
We would like to thank Hashim for his time and perspective. Follow his Twitter here.