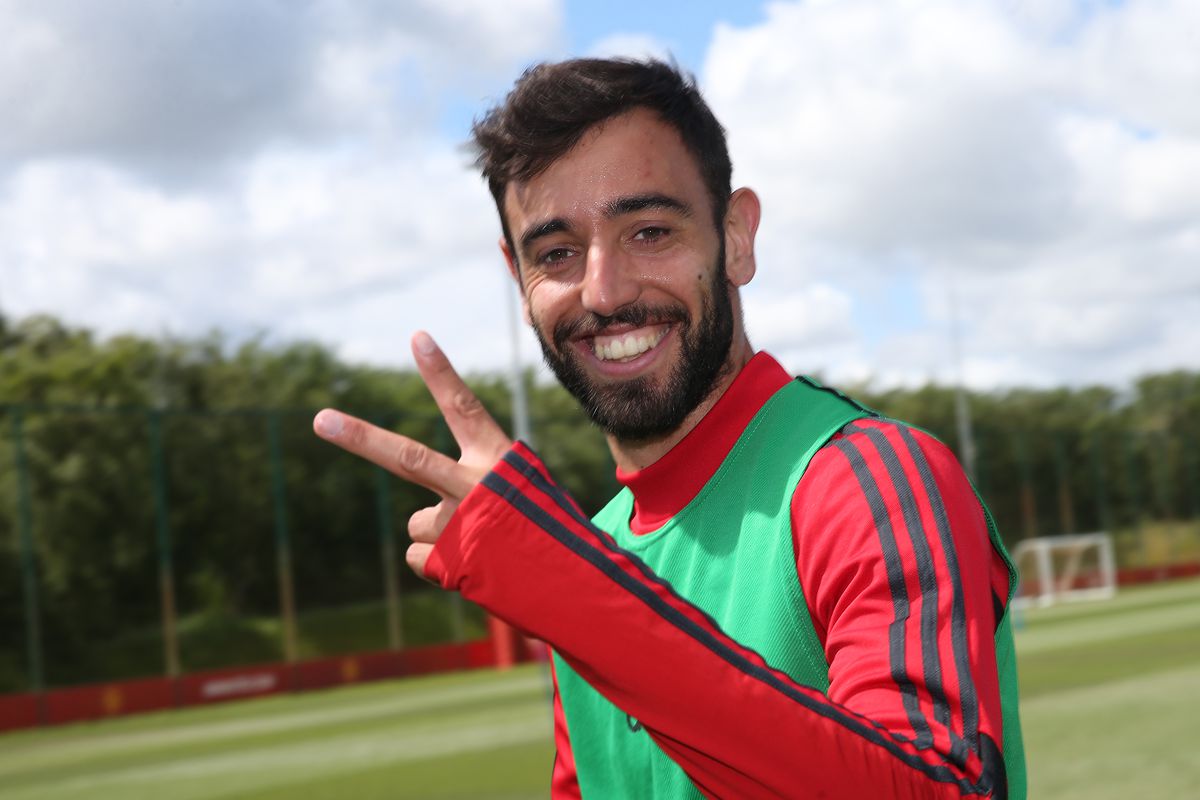 The potential link up between Paul Pogba and Bruno Fernandes became the talk of the town as soon as the Frenchman set a foot back in the Carrington gym.

Other than the World Cup winner, United have been crying out for another midfielder of similar quality for years. The lack of creativity, particularly moving into the final third, was at times disheartening.

Pogba was often the only spark of brilliance at the club since his return in 2016 but now, the new era of Manchester United with Fernandes as one of the leaders seems to have a lot more promise about it.

Fernandes hit the ground running and took the Premier League by storm following his January arrival and Ole Gunnar Solskjaer’s side have looked rejuvenated ever since — even with Marcus Rashford and Pogba on the sidelines.

The Portuguese midfielder had a direct impact on the overall atmosphere around the whole football club, not only on the pitch, and so it comes as little surprise that everyone involved with United is now trying to envisage Pogba and his skillset lining up at Old Trafford next to the new No. 18.

Keeping up with that theme, some recent reports claimed that Solskjaer is “ready to unleash” Pogba in the No. 10 role upon United’s June 19 return against Tottenham, with Fernandes set to sit deeper in midfield.

Of course, like with anything in football, the opinions on that concept will likely be split. But, having watched the two closely, particularly since they both signed for United — it does not feel like playing Pogba further up the pitch to Fernandes is the recipe for success.

On paper, the two can certainly play together. In practice, Pogba and Fernandes look tailor made to take on opposite roles as to what the reports have suggested.

Fernandes has looked at his frightening best for United when receiving the ball on the run and facing the opposition goal. His eye for goal and awareness for the killer pass in the final third can be devastating. You could see that from the amount of respect given to him by Premier League defenders even in his short-notice debut against Wolves.

From a very limited sample size in Red, Fernandes looks like a player who thrives when the pressure is on. He always seems to make the right decision in tight spaces when there is only a split second on the clock. He also often finds himself in very dangerous attacking positions.

Pogba is naturally that good of a footballer that he could play and do a very capable job anywhere across the front line. His physicality and deceiving quickness in spite of his size make him the complete package as a footballer. There was also a time in the not too distant past when many United fans were actually begging for Pogba to be played in that central attacking midfield position.

But, over time and with more maturity added to his game, it’s looking more like Pogba’s place on the pitch is actually in a deeper role.

His on the ball ability and athleticism are second to none, allowing him to venture forward and get back even if deployed as a defensive midfielder. But one of the most impressive aspects of his game as of late has been his vision. Pogba’s ability to read the game and see everything that’s going on ahead of him make him the ideal candidate for that deep-lying playmaker role.

The Frenchman had the perfect audition for that role during United’s season opening thumping of Chelsea at Old Trafford. The Reds put on a great showing en route to a 4-0 victory and Pogba was the conductor behind all proceedings while also grabbing two assists.

Pogba’s ability to control the tempo of the game was on show in that fixture. He knew exactly when to play quick one touch football and when to hold on to the ball and let the play unfold in front of him. He also showed what he can do in the creation department from that position with this crisp over the top ball to set up Rashford’s second and United’s third goal of the game.

The 27-year-old really started to excel in a deeper role during France’s World Cup winning campaign as he was the physical but creative force alongside N’Golo Kante and Blaise Matuidi.

With Fernandes thus far looking as good as he has when playing further forward and linking up with Anthony Martial and Mason Greenwood, the prospect of adding Rashford into that equation is exciting and makes for a potentially deadly front line. And with Pogba being the perfect mix of physicality and on-ball finesse that he is, it just doesn’t feel right to unsettle that harmony.

Pogba’s talent and value to United is irrefutable. But with the team starting to operate at a high level in his absence, he should slot back into the side in a way that can be the least disruptive to the project that had finally began to flourish in the last 11 or so games before the break.