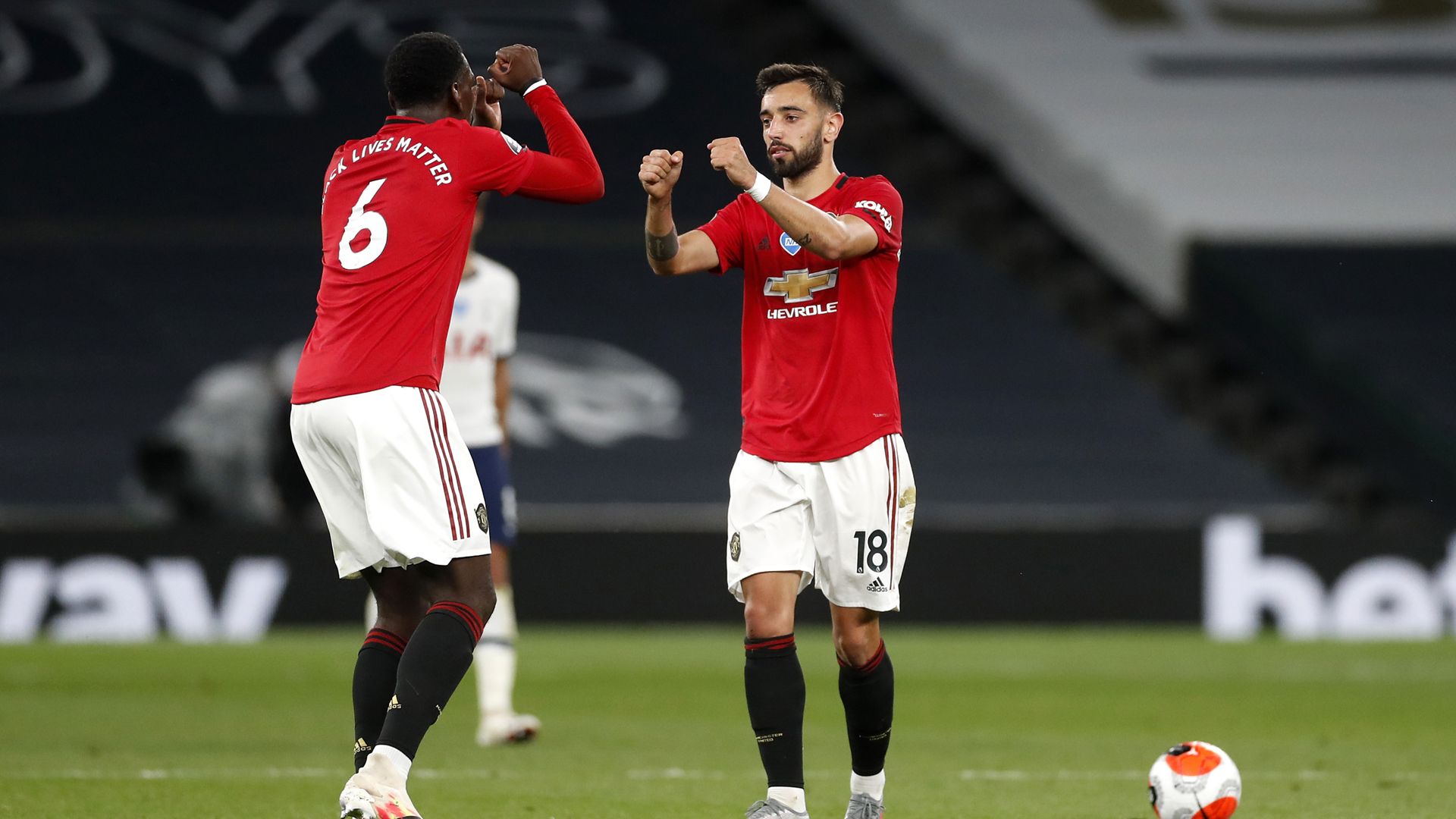 Manchester United returned to Premier League action after 99 days out of football with a mouthwatering fixture at the new Tottenham Hotspur Stadium.

Solskjær’s men always looked the most dangerous side and the United players will be kicking themselves for not leaving London with all three points.

Steven Bergwijn’s opener was cancelled out by Bruno Fernandes’ late penalty but it was an encouraging performance with all things considered.

Players being rusty was expected and fatigue was obvious towards the end of the game – United did exceptionally well in a difficult first fixture back.

David de Gea: 4
A relatively quiet evening for De Gea with the Spaniard being forced to make few saves but he must do better with Steven Bergwijn’s first-half opener. Although it was a shot met with a lot of power, it was straight at De Gea and the experienced goalkeeper should’ve been able to push it out to either side. Denied Son with a great save moments later.

Aaron Wan-Bissaka: 6
Solid defensively as usual, Wan-Bissaka was rarely troubled by Son on United’s right-hand side but the young defender still leaves a lot to be desired in the final third. He had improved offensively before the football hiatus and we can put

Victor Lindelöf: 7
Looked comfortable, never really looked like being caught out. Definitely passed the first test in these weird circumstances. Substituted in the second half with what looked like a calf injury. Hopefully it’s nothing serious. Substituted after 78 minutes.

Harry Maguire: 5
Started the game well but was completely spun by Tottenham’s Bergwijn for the opener. A player of Maguire’s ability is expected to deal with that much better. Played an important role in United’s second-half possession. A little rusty.

Luke Shaw: 8
It was a very good afternoon for Luke Shaw on United’s return to the Premier League. The defender seems to have picked up right where he left off earlier this year and deserves a lot of praise for his improvement this season.

The added competition from Brandon Williams has certainly helped but Shaw was one of the standout performers tonight.

Scott McTominay: 7
Tenacious and extremely aggressive in the opening exchanges, McTominay risked a booking in the first 10 minutes but was integral in United’s pressing. He was perhaps relied on a bit too much in the final third at times but the introduction of Paul Pogba relieved him of some of the pressure. Forced into playing a bit deeper than usual after Lindelöf’s injury. Substituted after 89 minutes.

Fred: 6
Definitely not a poor performance from Fred but the Brazilian looked like a victim of not being able to continue the great vain of form he was in. Fred has proved that his performances are enhanced by previous flourishes. Substituted after 62 minutes.

Bruno Fernandes: 9
Without a doubt United’s man of the match, it always looked like any danger from the boys in red would come through the Portuguese magician. Sloppy at times and perhaps a bit selfish as well, some long-range shots were wasteful but Fernandes plays with intent and that’s something United fans have been missing. Cool from the penalty spot, sending Lloris the wrong way. Also looked very good together with Paul Pogba for roughly 30 minutes.

Marcus Rashford: 6
First game in over six months for Rashford, we’ll give him the benefit of the doubt. The winger should probably have scored at least one but the UK’s most loved athlete looked off the pace. Expecting Rashford to run straight into the electrifying form he was on before his injury would’ve been harsch.

Anthony Martial: 6
Largely anonymous in the first half and was hardly seen. Improved a lot in the second half and forced Lloris into an incredible save. Substituted after 78 minutes.

Bench
Paul Pogba: 8
Took the game by the scruff of its neck when he came on and considering he hasn’t started in over 260 days, Pogba had an incredible impact on the game. It became abundantly clear that despite all of Fernandes’ brilliance, the Frenchman remains United’s best player and it will indeed be interesting to see how his partnership with Fernandes’ blossoms during the rest of the season.

Mason Greenwood: 6
Nothing too fancy and wasn’t overly involved but had a good chance in the dying embers. His right-footed shot flashed just wide of Lloris’ right side. Looked to have filled out a bit during lockdown.

Nemanja Matic
A strong cameo from United’s Serbian midfielder. Matic’s contract extension is yet to be made official but it’s clear that he still remains in Solskjær’s plans.

Odion Ighalo
Was hardly involved in his 10-minute cameo.

Eric Bailly
Only played five or six minutes and had few touches on the ball.