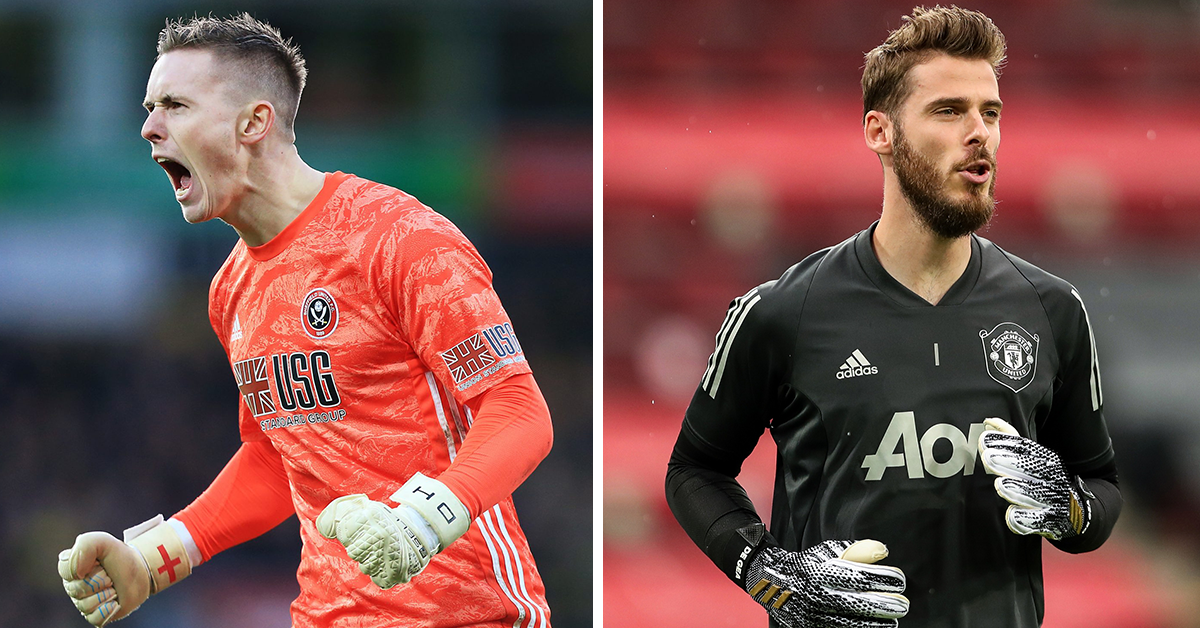 Dean Henderson has recently signed a new six-year contract with Manchester United, keeping him at the club until at least 2025, with an option of a further year.

The Englishman putting pen to paper has put to bed any form of questions regarding his long-term future, after small whispers about a potential exit from Old Trafford. Henderson has just completed his fifth successive loan spell away from the club, with some speculating whether the 23-year-old was ready to move on, in search of first-team minutes at a permanent home.

He is, however, here to stay, with the goalkeeper even citing the ‘Take me home’ lyrics in his contract announcement on Instagram. Looking forward, a battle between the sticks is set to commence between himself and the current number one in David de Gea. This is according to Jim White, who reports that Henderson will stay at United next season.

Ahead of such competition, we’ve compared the two men’s 19/20 Premier League stats.

The best starting indication when analysing goalkeepers is no doubt clean sheets, but neither player can be split in this department.

Only Nick Pope and Ederson registered more in the division than Henderson and De Gea, with 13 standing as a respectable figure for both men. Both the Red Devils and the Blades boasted a strong defensive record last season, with the two teams possessing quite a solid foundation at the back.

Henderson did feature in two less games than the Spaniard, not to mention that he was operating in a newly-promoted side, but the stats say 13 a-piece in this opening comparison.

Building from the back is an integral part of Ole Gunnar Solskjaer’s game-plan, as we have seen through his recruitment of Harry Maguire last summer. The Norwegian likes technical players that are comfortable in possession, and his goalkeeper is by no means exempt from this.

In terms of outright passes, Henderson is the clear leader in this department, but when you delve deeper into the stats, the 23-year-old has room to improve.

His pass completion rate of 36.8% is significantly lower than De Gea’s [74.4%]. In fact, the Englishman had the worst record out of all PL goalkeepers with 20+ appearances.

In slight defence of this number, Henderson was instructed to go more direct during his time at Bramall Lane. He averaged 7.4 long balls per game, compared to Dave’s 2.5. However, distribution is clearly an area that the former will have to sharpen up on, if he is to breakthrough into United’s starting XI.

Just like their clean sheet numbers, there is virtually nothing to split the pair in the saves department.

As mentioned, both clubs have a relatively solid defensive unit, known for their shutting out of oppositions. Eight other goalkeepers registered more saves last season than the duo, a statistic that highlights their ‘lack of’ activity at times.

Sheffield United faced 11.3 shots per game, with United averaging less at 10.3 Coinciding with their clean sheet ratio though, on paper, both men have been reliable when called upon.

In terms of high claims, Henderson is certainly the more superior in the air. He doubles De Gea’s tally, who registered the least amount in the entire division (only counting GKs with 15+ starts).

This has always been an area of trouble for the Spaniard, and despite improvements from his early years, it continues to cast a dark cloud over his abilities as a goalkeeper.

Based on the numbers alone, this is certainly an area that Henderson can look to exploit, to make a name for himself.

Corresponding with the above, it therefore won’t come as a surprise to see Henderson prevail in the punching department.

16 compared to 9 tells a similar tale – the Englishman is certainly stronger when it comes to the aerial duties. Only five goalkeepers registered more punches than Henderson last season, who has no doubt impressed during his debut campaign in the top-flight.

He has been a commanding figure within Sheffield United’s team, and these last two stats highlight the confidence he possesses, at such a young age.

There isn’t too much to split the two, but with more room to develop, it wouldn’t be a surprise to see Solskjaer lean towards the selection of Henderson next season.

The majority of the stats used have come courtesy of the Premier League’s official website.