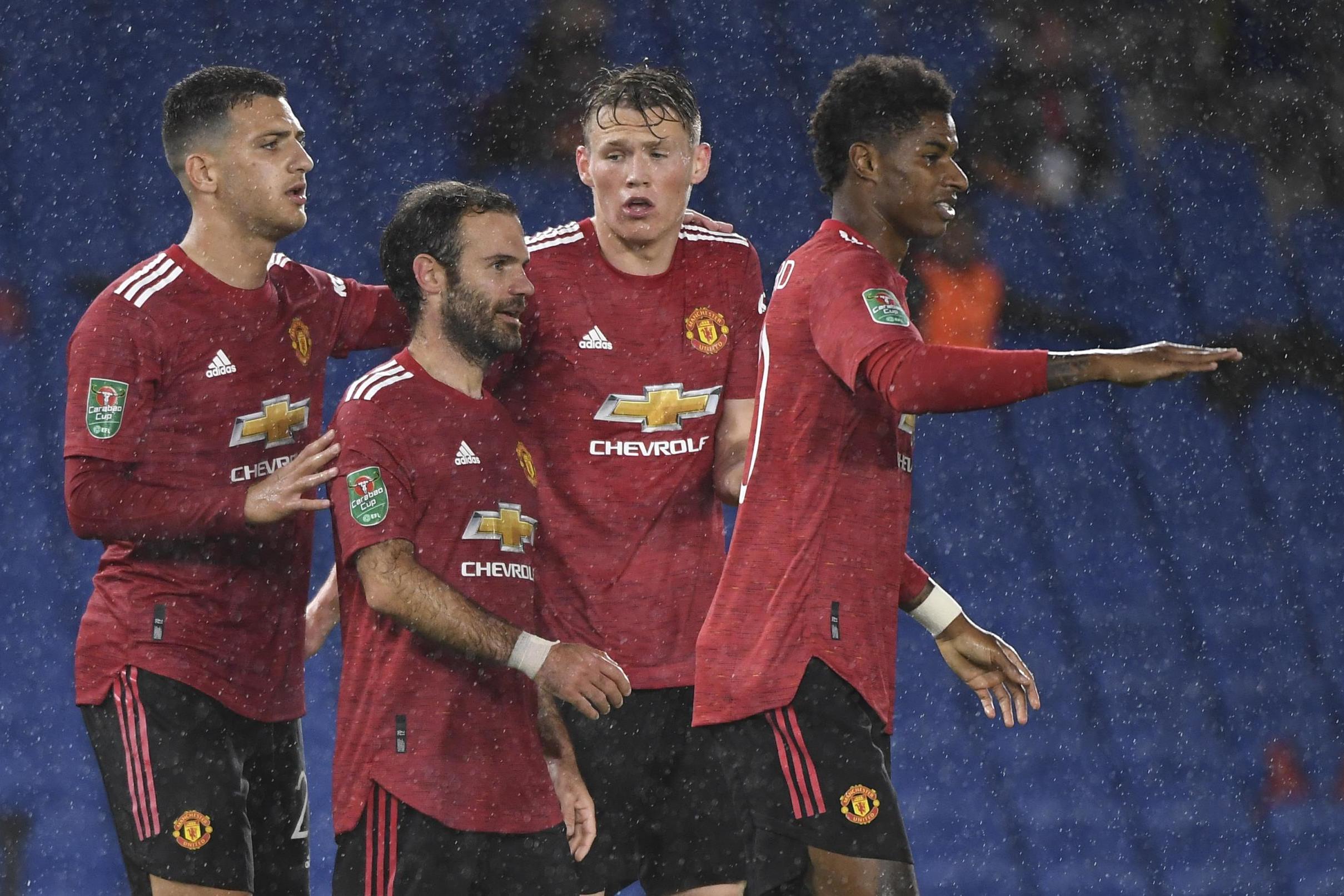 Ok, take two! Let’s be honest, the reverse fixture hardly went to plan and Manchester United were far from their best. Nevertheless, the Reds somehow managed to get a result last time out (even after the whistle had blown) and this evening, they faced Brighton for the second time in just five days.

There was lots to be improved upon from the previous game, but given this was an earlier round of the Carabao Cup, Ole Gunnar Solskjaer felt comfortable enough to start without several of his ‘game-winners’ and named a rotated side, with Graham Potter doing the same.

Notable choices included Dean Henderson, Diogo Dalot, Donny van de Beek – making just his second start for United – and Eric Bailly replacing Harry Maguire, who picked up a knock in training. Deputising alongside Victor Lindelöf, this centre-back partnership looked to be just as crucial tonight as it was on Saturday, and perhaps an audition for the Ivorian as Ole looks to solve his defensive woes.

The game started in a predictably pedestrian pace, as both teams looked to make the opening minutes look as calm and far away from the frantic pace of Saturday as possible. There was little of note in the first ten or so minutes, only that Fred, Juan Mata and Odion Ighalo all seemed to be setting out their stall as primary creators on the night, whether that be distribution, movement or hold-up play.

United did seem to be playing a fairly high line on this occasion, with the likes of Ighalo, James and Van de Beek looking to run in behind given the opportunity and take turns pressing the ball. The main problem, however, is that pressing only really works effectively when done as a unit, whereas United have often limited themselves to one at a time.

Moreover, despite nine changes to his side, Potter stuck not only with his back five but with Lewis Dunk, Ben White and Dan Burn too, Regardless, the first chance came in the 18th minute, after Dan James dragged his defender wide, opening up the passing lane for Brandon Williams to find Mata, who did well to get the ball across the box, with Ighalo only narrowly hitting the side-netting.

This relatively early glimpse of goal was much needed as there was still an air of unease about the game, whilst still in the balance, with the previous result almost acting as the elephant in the room. Brighton did start to sustain short periods of possession around the 20-minute mark, but United were the ones dictating the tempo thus far.

They answered back with an equally promising chance around five minutes later, when Jahanbakhsh struck the ball down to Dean Henderson’s right-hand side, with the ball slightly rebounding off him, though he was quick to smother the second ball. Both teams now looking to assert themselves.

United were almost caught on the break in the 31st minute, when one long ball down the left channel found Bernardo galloping. Thankfully, Bailly was quick enough to keep up with him and snuff out the danger, winning a free kick in the process – a solid start for the returning centre-half.

Henderson, despite having looked comfortable thus far, nearly created his own problems a few minutes later, after a strange choice of pass saw Brighton win the ball on the touchline and Mac Allister manage to get a shot off. The range and power were excessive enough to see it blaze over the bar, but the Seagulls were starting to gain the ascendancy.

They created a similar chance, thanks to some poor possession play in the midfield, and Jahanbakhsh – known for his spectacular efforts from distance – once again tried his look from range, but rising over the bar. Momentum building.

Regardless, United managed to survive this spell of pressure and after Burn was forced to bring down Mata, they were awarded a free-kick from far out. Naturally, the Spaniard was quick to step up and after curling in a deliciously lofted ball, Scott McTominay came cannoning diagonally across the box and rose to head it across the goal one into the net. 0-1 just before the end of the first-half.

United were poised to start the second 45 confidently: one nil up and having scored from a set-piece – a long-standing problem that is starting to improve under Ole. However, the rain coming down thick and fast could have been seen as a bad omen, as Lindelöf gave away the ball immediately set Brighton off to a stronger start to the half.

Despite looking a key threat in the first half, an injury to Jahanbakhsh led to him being replaced by first-choice striker Neal Maupay, who scored and gifted the penalty in the previous game. The former Brentford man is no stranger to playing the pantomime villain and would surely have been looking to make similar waves once again.

The next real chance of the game came in the 53rd minute and from another free kick, no less. This time it was Fred who chose to take over and tried his luck against Jason Steel, who nearly spilled the ball out of his grasp as Henderson had earlier.

Brighton looked to be operating more and more in the final third though and despite a fairly composed start to the game, there did seem to be some indecision creeping into the backline. Whilst moments of tentativeness are expected from the likes of Dalot and Williams’, having recently played few minutes, Lindelöf too appeared to be exhibiting his familiar jitters.

In the 63rd minute, another major threat entered the game: Leandro Trossard, who hit the woodwork three times on Saturday and was a constant source of anxiety throughout. United were struggling to keep the ball in the middle third and already enduring constant waves of pressure from Brighton, it was a sight to cause concern.

This proved to be true in just the 67th minute, as a lapse in concentration saw United gift the ball to Brighton from a throw-in and after being worked out to the right, it was cut back across for Trossard to hit first time. It had enough sting and placement to challenge any keeper, but Henderson pulled off a wonderful reflex to deny Trossard a goal against United for the umpteenth time.

Ole clearly wanted to respond positively, deciding to send on Marcus Rashford and Paul Pogba for James and Ighalo.

Just as Trossard’s introduction did, this change had an instant impact, albeit indirectly. After a simple ball towards the D was not closed down, Van de Beek was there to flick on the ball into the box and for Mata to comfortably tuck it into the bottom right-hand corner. 0-2 United. The little magician once again making things happen – four goals and eight assists in his last 15 starts, in fact.

Pogba nearly got a much-needed goal moments after, as another lovely worked move by El Mago saw the ball chipped towards the back post, only for the Frenchman to nod just wide of the post. The game still had an end-to-end feel, but United were certainly attacking with more conviction.

As if to correct history almost immediately, in the 80th minute, Pogba did get his goal after a well-won free kick from Rashford saw his slightly deflected effort creep through the wall and into the top corner. Hopefully, this goal will act as a catalyst for United’s number six, who is still looking to get back to full match sharpness. 0-3.

With three goals scored, Ole was clearly looking to get as many as possible, as well as get more minutes into legs now. After Lingard replaced Fred following the third, Mata and Van de Beek combined once again to play in Dalot, who spurned his chance form short-range; Jesse also came close to netting, just lacking that clinical final ball to finish the game with a flourish.

In the end, three proved to be plenty enough, as the final whistle blew to round off a much more convincing and certainly calmer performance from United. While Brighton were by no means completely out of the game until the final ten minutes or so, the Reds had a comfortable first half and an even better second one.

There were several performances to be praised; two-time assister Van de Beek was instrumental in most attacking moves from United tonight and Bailly didn’t miss a beat all game – surely guaranteed to start alongside Maguire against Spurs. However, there was one clear man of the match in JMata. Scored one, created nearly everything.

He often goes under-appreciated due to his fewer minutes in this late stage of his career, but as he is proven time and time again, he is a crucial lockpick in games with compact defences like this. The key architect throughout the game, his value to the side cannot be overlooked and should be considered to mix up starting elevens more often. 50 goals for the club too – a great achievement.

All in all, this was a far cry away from the events of the game in the Premier League and it was, no doubt, a much more enjoyable watch for United fans. While cup competitions are key to defining levels of success this season, the immediate focus needs to be on bouncing back in the next league match, so hopefully this was platform to build on. Into the next round and on to the next game!