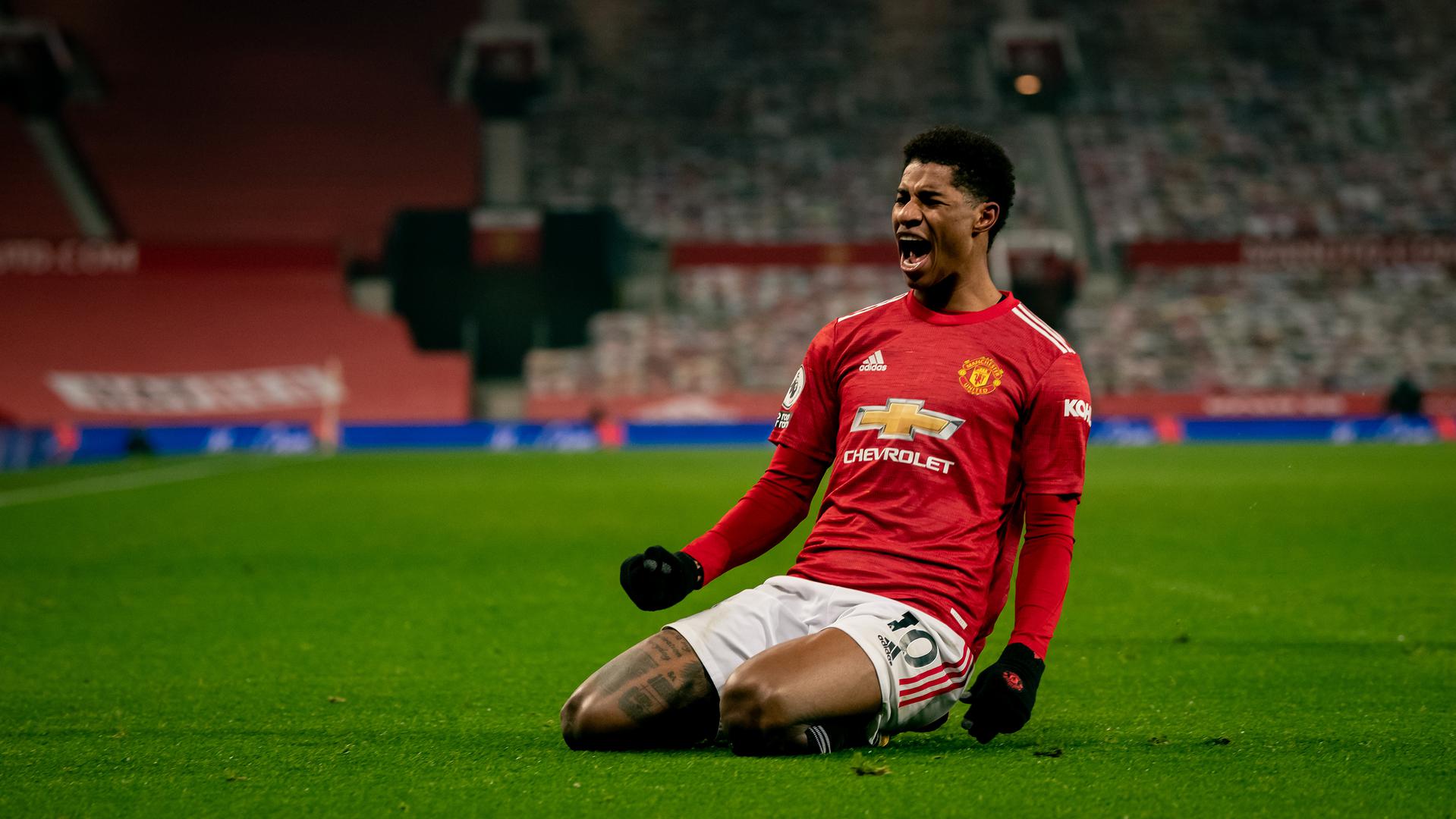 If you put the circumstances of Marcus Rashford’s Manchester United senior debut side by side with where he’s at in his career right now — his rise to superstardom has been nothing short of extraordinary.

The Wythenshawe born and raised forward always had eyes on him coming up through the ranks. He was regarded as a promising young player in the U18’s, but he was never a typical ‘goleador’. Not if you compare his academy goal scoring record to a Mason Greenwood.

But timing in football is everything, and for everything that Rashford ever may have lacked, he made up ten fold with his commitment, tenacity, versatility, lightening pace and exceptional technical ability.

All time great and former Red Cristiano Ronaldo religiously credits his work rate when talking about his rise. Rashford too is one of those players where a great talent was matched by an even greater willingness to graft.

The season Rashford made his debut, he was already on the fringes. He was training with the first team and even made the bench during a trip to Watford a few months prior. But if Anthony Martial didn’t get injured in the warm up to the infamous Europa League second leg against FC Midtjylland and the once highly rated Will Keane wasn’t always peppered with injuries — who knows where Rashford’s career path would’ve led him.

Rashford would’ve gotten minutes that season regardless. Chances are he would’ve still went on to become a good United player. But would he be on track to become a club legend just five years into his journey? Thankfully, we don’t have to ponder over that question for too long because Rashford was in the right place at the right time to take his chance.

It’s funny how things work in football sometimes. A brace in his first team debut against Midtjylland played Rashford into Louis van Gaal’s starting lineup the following Sunday against Arsenal. Rashford repaid the manager’s trust there with another double. Even though he was merely a youngster trying to make a good first impression and play himself into long-term plans, Rashford already led by example there and then. The rest — up until now — is history.

Rashford broke into the first team during a time when United were not living up to the reputation that Sir Alex Ferguson built. It was a tough time. The club became a bit of a cash cow and a place for big names to come and get a pretty paycheck. But when all was failing and an injury crisis struck, van Gaal was forced to resort to the academy. That’s all a hungry Rashford needed. It feels like he has barely missed a game since.

Teams can certainly be improved by good business in transfer windows, but you also have to breed leaders from within. As mentioned above, Rashford was that right from the beginning and that has gradually increased season by season to where now he is the face of the club.

At first, Rashford needed time — as all youngsters do — to get integrated and establish himself within the squad hierarchy. During that period, the then teenager set the standard solely with his actions on the pitch. Rashford has always embodied a Manchester United player. You could see exactly what it meant to him to play for his boyhood club. Even on off days, you can still always count on him to put in a shift, to never stop running, to track back. Those little things always matter. They do now and they especially did back then — when the culture of the club was somewhat getting lost in translation with every passing day.

Rashford’s style of play hasn’t changed much since he first stepped out under the Old Trafford lights. He gained a lot of confidence in himself, he became stronger, more experienced. But you still get the same things out of the 23-year-old. Dedication, desire, commitment, passion, selflessness. Those are some of the key reasons as to why he is such an invaluable piece to Ole Gunnar Solskjaer’s United and also why he finished Thursday night’s Europa League second leg against Real Sociedad with the captain’s armband strapped on his bicep. He earned it. He can always be relied on.

In spite of only winning three trophies (and the Community Shield) with the club so far, Rashford has already created so many incredible moments and all at different stages of his career.

He started by scoring a goal in essentially every debut he’s ever had. Be it the Europa League, the Premier League, the League Cup or the Champions League, Rashford has did it in all of the above. Then came the moments that will forever etch in many memories. Moments that gave fans hope when he was just a promising youngster, and those that reassure fans now when he is the star that a winning team is being built around.

That night in Paris. The wonder goal away to West Ham at Upton Park in the FA Cup. The winner in the 1-0 win against Manchester City at the Etihad. The double against Liverpool at Old Trafford. The fastest hat-trick by a substitute in Champions League history against RB Leipzig. The sensational free-kick at Stamford Bridge in the Carabao Cup. The winner away to Celta Vigo in the Europa League semi-final. He also scored the winner in the quarter-final that year when United went on to win it all. We could sit here all day coming up with more.

Amassing 136 goal contributions (85 goals and 51 assists) in 253 appearances for the club so far, Rashford grew in front of our eyes. Into a star. Into a leader. Into a role model. Into the clubs No. 10. Into a captain.

Rashford dazzling defenders out on the left wing, donning the famous No. 10 of Manchester red is a sight to behold. A club famous for having world beating wingers, it is now witnessing the rise of another.

United know a thing or two about developing young talent. Gradually, Rashford too rose to the top — as the cream always does. Last season, it was the forward’s first in the 20-goal a season club. He scored 22 in all competitions — all while his campaign was interrupted with a serious back injury halfway through.

This season, he already has 18 in all competitions at the end of February — well on track to beat last season’s tally and with the sample size being enough to claim that Rashford is becoming a bonafide 20 goal a season player. And that’s not all there is to his game.

As mentioned earlier, the academy graduate is selfless. Last season, Rashford chipped in with 12 assists in all competitions. In the current campaign, he already has 11.

In terms of goal contributions (29) — at United, he is only behind Bruno Fernandes (35). On a global scale, he is only behind Erling Haaland (34) and Kylian Mbappe (30) — a duo that is widely regarded as the heirs to the thrones soon to be left behind by Cristiano Ronaldo and Lionel Messi. For someone who never gets mentioned in those conversations, Rashford is comfortably keeping up with the elite. He’s right there.

If that weren’t enough superlatives over a relatively short five year period, Rashford is also a model citizen. Being a great footballer that people look up to because of your unique abilities with a ball at your feet is one thing, but being an outstanding human being is another. Rashford is both.

Less than a year ago, utdreport noted everything that Rashford had done to help better people’s lives off the pitch. Since then, he has already added so many more incredible achievements to that list, including making the British government go back on their stance regarding child poverty in the UK not once, but twice.

During the last year during which so many people have been hit by coronavirus related problems, Rashford not only stepped up as a leader on the pitch for Manchester United, but also as a leading figure and someone to look up to and follow for people outside of football.

Only just recently Rashford was awarded with a gold Blue Peter badge which is a recognition for “inspiring a nation through campaigning.” Upon receiving the award, the United star was able to speak out on what being a role model and using his platform to inspire and bring about change means to him.

“I am happy that I’m able to spread positive messages and show a side of me that people might not know of,” Rashford said. “A lot of what I do is not for me, I just want to give people the best chance to be the best they can be.”

Along with that, Solskjaer, who has overseen a lot of the Englishman’s development and given Rashford the honor of captaining United for the first time in his career last season too had some words on the forward’s fifth year anniversary.

“He’s had an incredible, incredible impact both on and off the pitch,” Solskjaer said during media duties during the week. “He’s matured, grown into a real proper young man. He knows what it takes to be a Manchester United player on and off the pitch. He’s taken responsibility on it and off it.

“I do remember a young little lad coming on, two nice goals, celebration with his team-mates in the stand. I think he’s living proof of what we want to do at the club. That when you sign for Man United, whether you’re five, six, 10, 14, you’ve got a chance to make dreams come true and long may it continue because he’s got 10-15 years left in him.”

If that doesn’t tell you about the kind of ambassador Manchester United has in Rashford, then nothing else will.

In modern football, it’s difficult to envision too many one club players such as the likes of Ryan Giggs or Paul Scholes. But there is something about United’s academy that breeds that kind of loyalty into the youngsters. Rashford, being one of them, is vocal about his love for the club. His favorite goal to this day is his winner against City at the Etihad at the very start of his career. He lives and breathes United.

The sky is the limit for Marcus Rashford at Manchester United. He is still young and polishing out his game. Already edging ever so closer to club captaincy, the pen that writes his United legacy has already been picked up. His actions on and off the pitch are constantly putting more ink on the paper.

And with potentially so many more years in Red still to come, all of the great, long-standing club records are his for the taking. Having already scored 85 goals and made 236 appearances, Rashford could very well be right at the top of the all-time United great lists when it is all said and done.

Is it time to give Dean Henderson an extended run of games?
The greatest manager ever? A look back at the Busby years
To Top