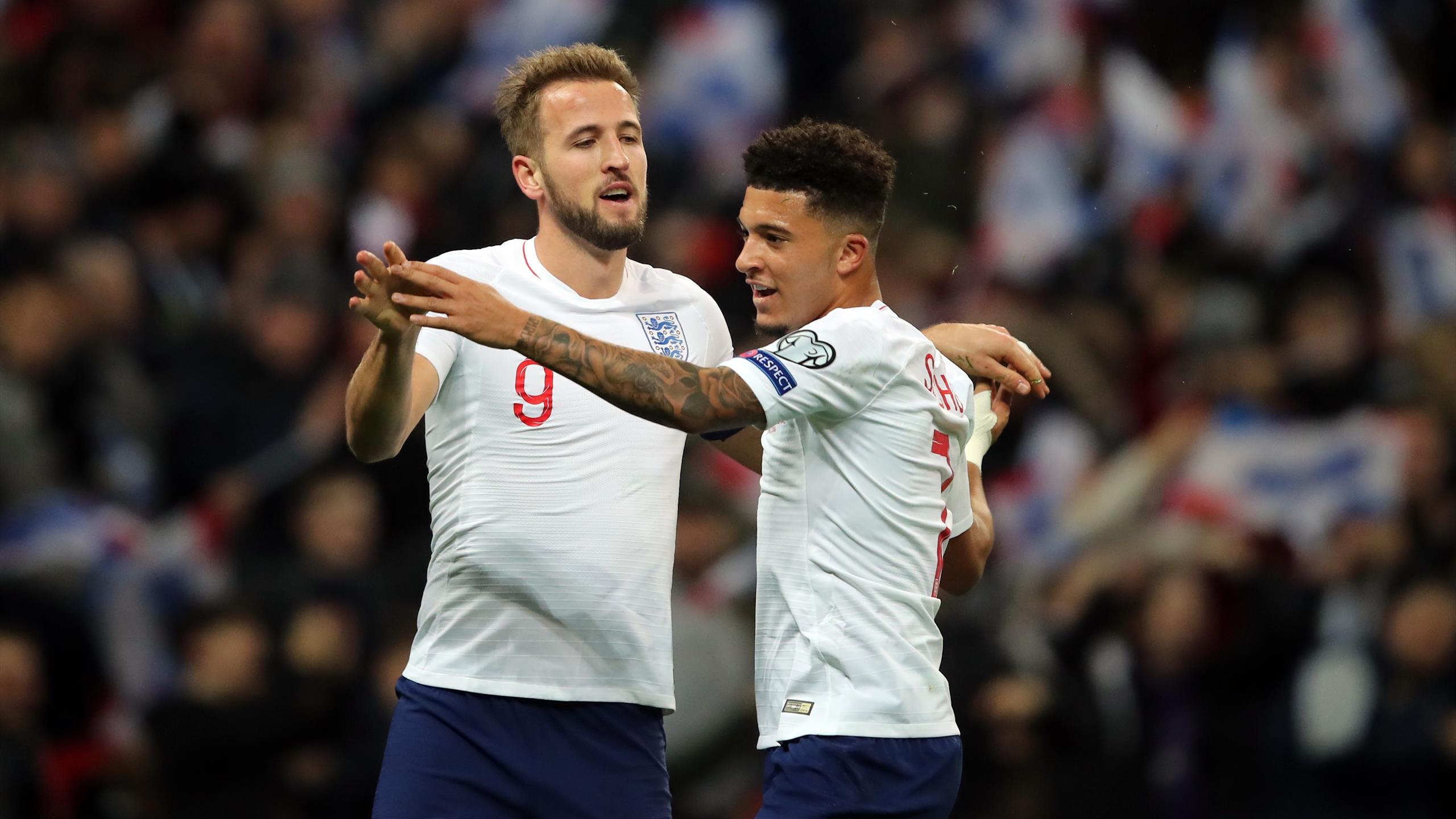 Jadon Sancho has been the headline Manchester United transfer story since the club acquired the services of Bruno Fernandes in January of last year. The seemingly never-ending romance is still yet to reach its conclusion heading into the summer.

United have had a gaping hole on their right flank ever since the recently retired Antonio Valencia converted into a right-back on a full-time basis under Louis van Gaal.

Sancho, 21, is an academy graduate of the crosstown noisy neighbors who embarked on a European adventure to gain first-team football as a teenager and has since become one of the hottest properties in world football.

Coincidentally, his success made him the ideal candidate to become one of the faces of Manchester United. Young, English, skillful, immensely creative and efficient, and with a preexisting bond with most of United’s young core, you can’t say this is surprising. Sancho would fit Ole Gunnar Solskjaer’s system like a glove and immediately elevate the team up to another level, just like Bruno’s arrival did.

But with every romantic story, there is always a third party trying to throw a spanner into the works (in this context, positively). And as we approach the second consecutive ‘Sancho to United’ summertime madness, a potential new target has emerged on the radar.

The rumors of Harry Kane potentially wanting to leave Tottenham have been circulating for some time. But this week saw a breakthrough as one of England’s finest ever goal scorers told his club that he would like to pursue a move away.

Naturally, when a player of Kane’s stature becomes available, all of the giants raise their eyebrows. United will be no different and — as a matter of fact — one of the only clubs who may be able to afford the astronomic price tag that will need to be paid to get Kane out of London.

With the financial hits caused by the pandemic still hanging over the heads of the vast majority of football club owners, there is every chance that Kane’s desire to leave will not go past rumors and links. But, if United were in a position to sign him, should they? Or should Sancho remain a priority? Let’s take a look below:

Pros:
It’s hard to name too many good things that Jose Mourinho did for Tottenham in his brief spell at the London club, but converting Kane into an all-around goal contributing machine is one of them.

And even still, with the most assists he has ever had in his career, the 27-year-old is a pure goal scorer. There are no two ways about it. A good old-fashioned No. 9 who will sniff out a chance from anywhere inside and out of the danger area. Scoring goals is second nature to the England captain.

The 2013/14 season was the last time Kane had less than 20 goals in all competitions. He was 20-years-old and just breaking onto the scene. The following season, he scored 31. And since then, he has only had two Premier League seasons during which he scored less than 20. A machine.

Alan Shearer’s all-time goal-scoring record (260) in the Premier League felt very far out of reach once Wayne Rooney hung up his boots with 52 less. Until Kane.

Just about entering the athletic prime of his career, Kane is only 95 goals away. These kinds of prolific strikers do not come about very often. United may have had other plans, but Kane’s availability would make anyone reconsider. And the striker may well want to stay in England to try and hunt down that record.

Under Mourinho, Kane remained his lethal self while also expanding his game. He became more fluid instead of being that typical hang around the box marksman. This season, Kane’s excellent passing range came on display. Operating on the ball deep and out wide, his versatility makes him an appetizing prospect for a United side that loves to play positionless football going forward.

Aside from his goal-scoring prowess, Kane’s game has expanded so much that his 0.34 assists per 90 rank him in the 96th percentile in his position. He has really turned into the complete forward and albeit United aren’t as desperate for a goalscorer as they may be for a wide creator, Kane is no longer just goals.

Cons:
Kane is arguably at the perfect age for a striker. He is comfortably experienced enough to add leadership to any team he joins and at the same time, he is as hungry to win as anyone because of the lack of trophies in his career.

His frustration is justified. Kane is having a career-best season but his team could still end up playing in the brand new Europa Conference League. That is not the platform for superstars.

One potential concern, even last season, would have been that an out and out No. 9 like Kane would suffer in this United side that can often struggle to create chances. But since adding playmaking to his game, Kane would actually improve Solskjaer’s side in chance creation as well as goal scoring.

The rumored price tag for the 27-year-old is well in excess of £100 million. It’s hard to pick holes in that. But considering that Kane is nearing his thirties and beginning to experience some injury issues is a worry for any potential investor.

Having just dealt with a recovering, and as a result often unavailable, Edinson Cavani for a season, this is something to consider — especially for a young United side that is building towards a winning future. Committing to a lucrative long-term contract with a player who could soon become injury prone could wound United.

But, with that said, that is virtually the sole cause for concern. And on the other hand, the impact that his goals and presence alone would have on a team like United far outweigh any con. He is the caliber of player that could propel the Reds to a league title.

Pros:
As far as footballing ability and personality go, Sancho is tailor-made for a club like United. He has that big club swagger about him. His brave decision to step out of his comfort zone as a teenager in hopes of becoming one of the best players in the world is commendable and shows a strong character. That’s a good omen for the demands of being a global superstar and representing United.

This year is Sancho’s fourth season in Germany. In three of them, he put up numbers that simply did not make sense for a player still in the early development stages. He took to the foreign challenge like a duck to water.

At 18, Sancho went from one season playing in the U-19 Bundesliga and the UEFA Youth League to 13 goals and 20 assists in all competitions in the first team the next.

At 19, he followed that up and answered the questions of the legitimacy of his breakout season with 20 goals and 20 assists in all competitions. That was a deafening way to announce yourself on the global stage. Certainly not a one-season wonder.

Coming into the current campaign, after a full summer of links with United, Sancho was comfortably viewed as one of the best wingers in world football — all before turning 21.

This season has thrown up even more surprises and obstacles that Sancho had to pass in order to prove himself.

Injury issues and constant off-the-pitch noise were tests that Dortmund’s No. 7 passed with flying colors. His current tally sits on 37 goal contributions in all competitions. He also became the fastest and youngest player in Bundesliga history to reach 50 assists.

When it comes to effectiveness and goal contributions, Sancho is just as much of a machine as Kane. But in the winger’s case, he just seems more naturally fitted to United’s style of play and especially the club’s current needs.

Sancho can play all across the front line. That’s something that would fit seamlessly into Solskjaer’s fluid system. But most of all, Sancho is excellent when playing out on the right, and that’s where that troubling hole at United is.

In addition to finally filling that gap, Sancho would elevate United immensely in chance creation. As aforementioned, the Reds do tend to look toothless in the final third at times, and especially when the likes of Bruno, Marcus Rashford, or Paul Pogba have an off night, or if teams manage to key in on keeping them out of games.

Some statistics see Sancho in the 98th percentile in assists (0.47) and shot-creating actions (5.22) per 90. In other words, teams would no longer be able to focus on one side of the pitch when defending United. They would have to stretch in order to contain such a potent midfield and that would make life a lot easier for everyone involved.

Sancho would bring another dimension to United’s attack. He is a world-class, game-changing talent and all of his mental and on-field tests up until now have prepared him for a big-money move. A move that United needs to make.

Cons:
The only one that comes to mind is that Sancho is unproven in the Premier League. Even though many players have conquered the league coming from abroad in the past, Bruno included, it is still a testing battleground.

What Kane offers you that Sancho doesn’t is a near guarantee of production. Of course, there are also inexplicable anomalies such as Alexis Sanchez. But Kane has been there and done that.

With Sancho, his incredible numbers from Germany will almost certainly not translate wholly as he would come into a team with other stars. He would no longer be the chief creator at United. He would have to share the load with others and that could naturally see his numbers decrease, though the value of them would remain.

Pundits and fans though are unforgiving — and sometimes illogical — and anything less than 40+ goal contributions in his first season would undoubtedly be criticized all over social media and TV — meaning that it would also provide Sancho with another psychological test. But that simply comes with the territory of playing for the biggest club in England.

The bright side is that his surroundings would be familiar and he would come into an environment filled with familiar faces in the United dressing room.

On one hand, beggars can’t be choosers. United desperately needed good activity in the transfer market this summer to adequately strengthen ahead of an expected title charge next season. With that, either Sancho or Kane would help massively.

But if we’re talking about the perfect fit and who United as a club with the identity that Solskjaer is building needs, it’s Sancho. It’s a no-brainer.

Having just extended Cavani for another season and with Greenwood emerging as a presence centrally, United — right now — need another creator much more than they need a goalscorer.

Adding Sancho would give United a much-needed wing presence on both sides, take some of the burden off Bruno, Rashford, and Pogba, while also freeing up Aaron Wan-Bissaka and allowing Greenwood to continue his transition into a center forward.

Fast-paced, adventurous one-touch football with lots of goals and room for expression — that is the brand of football that Solskjaer is striving for. To get there, he needs another reliable playmaker that would make United more effective in front of goal and able to kill teams off. Sancho brings that — and more — for the next decade.

The Super League threatened mental health, whether you realise it or not
UEL Aftermath: Final loss can still be a springboard to success if Solskjaer gets backed this summer
To Top