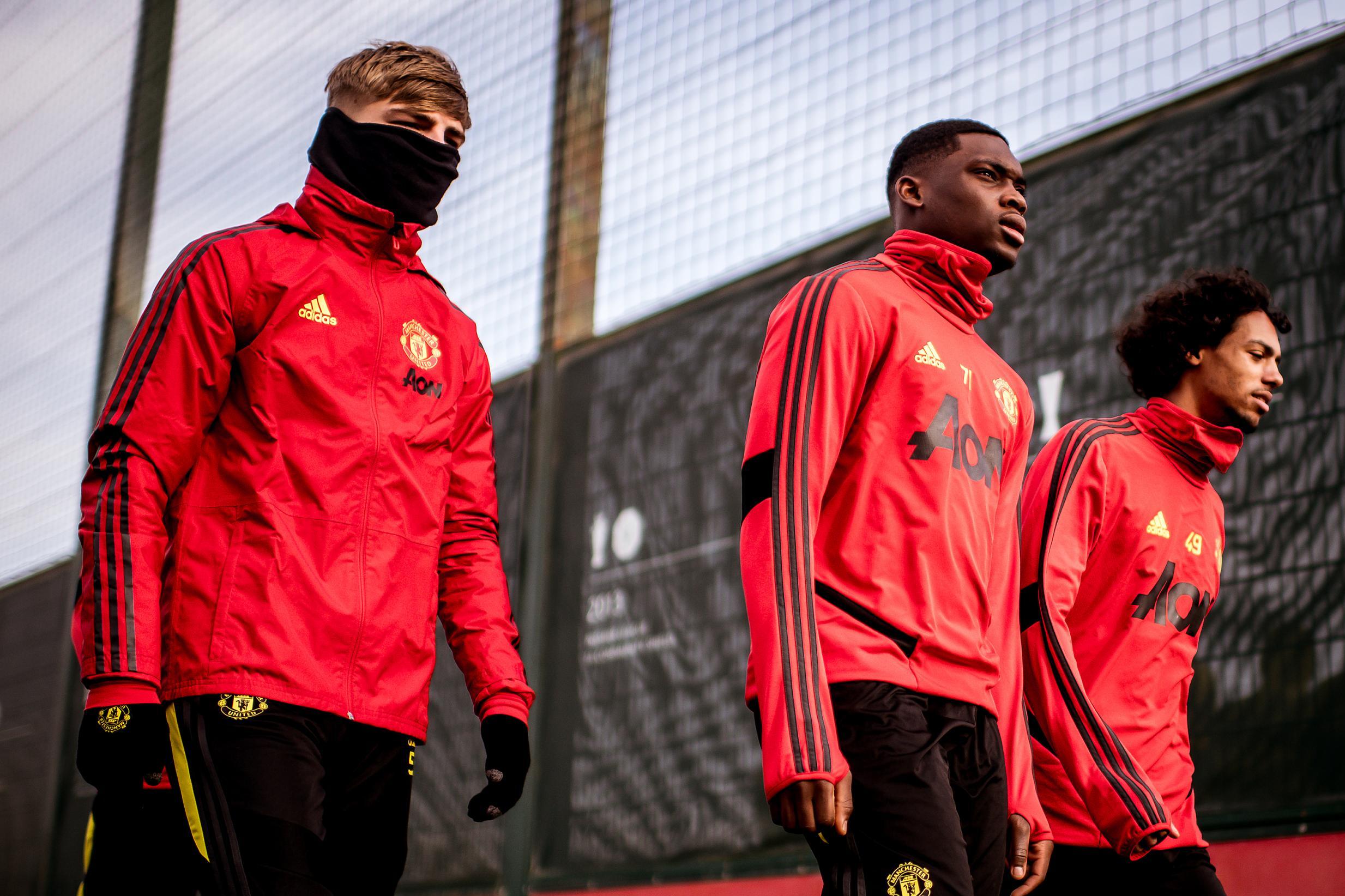 The integration of academy players into the first-team picture has been a major success story of Ole Gunnar Solskjaer’s short tenure as Manchester United manager.

Plans were put in place last summer to support this philosophy, with Nicky Butt assuming the role as the ‘Head of Youth Development’, working closely with the Norwegian in helping identify and guide promising talents into the senior squad.

Mason Greenwood and Brandon Williams have been perfect examples of such, with both figures helping bolster options in the first-team and even effecting transfer plans in their respected positions.

Looking ahead to next season, we’ve picked out three names that look primed to make a similar jump.

Before being transitioned into the senior squad, United ideally want a player to spend at least a single season in the U23s setup. It’s a notable step up from the U18s, but it offers coaches a deeper insight into just how quickly a player’s development is coming along.

Teden Mengi has embarked upon this route this season, with the defender adapting to life smoothly. No player has featured more times than the 18-year-old, who has established his commanding presence at the back.

Predominantly partnering Di’Shon Bernard at the heart of the defence, the duo have been a force to be reckoned with, boasting the least amount of goals conceded in the division. Mengi in particular has been picking up the plaudits, most notably for his aerial ability but also his distribution from deep.

The Englishman’s influence is best highlighted through the club’s FA Cup Youth results this season – he captained the side to four wins out of four, keeping three clean sheets along the way. His development has certainly been catching the eye, hence his inclusion in the first-team’s Europa League trip to Astana back in November.

Should Eric Bailly and Axel Tuanzebe’s injury records be repeated next season, Mengi will be waiting in the wings. There is every chance he will receive more opportunities across cup competitions too, particularly if the club clears out the unwanted figures of Chris Smalling, Phil Jones and Marcos Rojo.

Just like Brandon Williams, Ethan Laird could well capitalise on Manchester United’s lack of depth in their full-back department. The former has offered some direct competition to Luke Shaw, with the club now having two LBs battling it out for the first time in recent memory.

Over on the right side, we could see a similar pattern take place. Whilst Aaron Wan-Bissaka has been nothing short a revelation, the lack of options behind him is certainly alarming – the now departed Ashley Young filled in twice during the Englishman’s three absences in the Premier League this season.

With Diogo Dalot’s future also in doubt, there appears to be an opening for a new right-back to enter the first-team squad. Without question, Laird is the man for the job. The Englishman is a highly-promising talent, who, like Mengi, has impressed during his debut campaign with the U23s.

He has featured ten times in the league this season, notching up a respectable three assists. On the ball, Laird is quite the attacking outlet, opting to drive forward and get crosses into the box. The 18-year-old has featured twice for the senior team in Europe this season, averaging an encouraging two dribbles over the space of just 112 minutes.

There are no concrete plans linking United with a new RB this summer, prompting the potential for Laird to get more first-team minutes under his belt.

Even for those fans who don’t take much interest in the academy set-up know the name of James Garner. The Englishman has featured in four Europa League games this season, with the club holding the midfielder in the highest of regards.

Despite transitioning into more of a box to box midfielder for the U23s this season, scoring eight in ten, Garner has been deployed deep for the first-team. Recognised for his tidy recycling of the ball, the 19-year-old is no doubt comfortable in possession – he has maintained a 90% pass success rate over his four European appearances.

It wouldn’t be an exaggeration in saying that Garner is a close resemblance to a man on Old Trafford’s side-lines who would have been proud of such a stat – Michael Carrick. The two share a similar build and physique, adopting their presences on games in almost identical fashion.

It’s no surprise that Garner has been deployed in games where United have been expected to dominate possession this season, with the youngster gradually becoming moulded into a first-team squad member. The main issue, however, lies with the club’s bulk of options in the middle, particularly with figures that prefer to operate from deep.

Scott McTominay, Fred and Nemanja Matic all fit this bill, complicating where Garner’s breakthrough moment will come from. However, for a midfielder of his age, the club have been very forthcoming with his cameos so far. Although his appearances will continue to be limited, the Englishman will continue to be granted opportunities to showcase his talent next season.