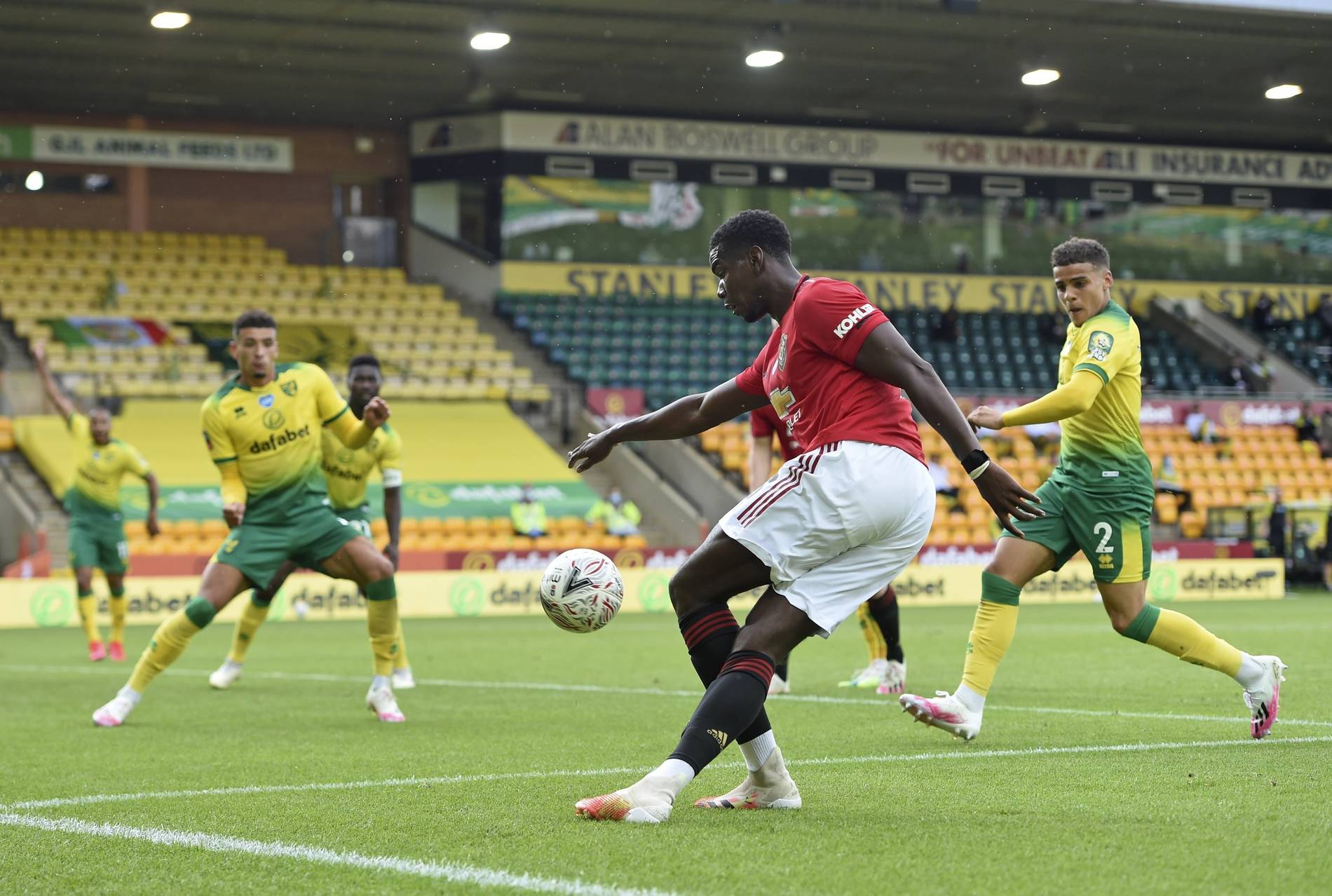 Despite United still looking to secure a Champions League finish, the prospect of winning the FA Cup is not only appetising one but an achievable one. The fans would no doubt like to add the Europa League into the mix but for now, this was set to be a big game for both teams’ seasons.

Whilst Norwich are seemingly doomed for relegation, this proved to be a rare opportunity to cushion the fall with some silverware. United had dealt with them fairly comfortably in the league, even aside from Tim Krul’s heroics in saving two penalties in one game, but the story would soon prove to be very different this time round.

There wasn’t much quality shown from either team in the opening 10 minutes. Although he grew into the game, Bailly started the game the shakiest, clearly showing his lack of minutes even outside of lockdown. As has been the case in most first halves in many first halves post-lockdown, there was a competent yet lackadaisical quality to most of the players out on the pitch.

United were patient and started to try working together more intricate patterns. The first real move came from Jesse Lingard, who despite having suffered for form over the past couple of seasons, started well in this game. After some early playmaking from Bruno, he completed a short dribble on the edge of the box, changing lanes and nearly getting a shot off.

Similarly, despite not looking the best in the two previous games, Luke Shaw started the game well, bombing forward in the wing-back role he tends to prefer in a game where his defensive duties were not as much a priority, going on to remain a real outlet throughout the game.

As was expected, especially given the rotated line-up, Bruno was the chief architect of nearly all of United’s moves in the first half. Admittedly, this particular team hasn’t necessarily played together all that often prior to the game, but there was a clear absence of the chemistry that has clearly started to develop among that full-strength side.

Not only did he look the most likely to unlock anything, but even with the occasional misplaced pass or hopeful shot, he was still trying things and constantly communicating with the players and trying to get more out of them. The biggest chance came after 20 minutes, as the Portuguese midfielder combined with Fred in a quick tiki-taka move, embellished by McTominay, who played in Ighalo with a clever backheel flick of a pass, who couldn’t quite get his shot away.

Norwich certainly weren’t getting penned in though. Although neither team looked overly threatening, they did match United in getting up the pitch quickly and looked just as intent on trying to play their very open, attacking game. Jamaal Lewis – one of their two promising, young English fullbacks – was probably their brightest starter, regularly getting up that left flank and looking to whip in a cross, as well as working diligently going the other way.

Central play looked to be difficult for United: Mata was a ghost at times and just didn’t seem to be able to get near the ball, and Lingard suddenly started to fade away. Instead, it was the long diagonal balls that looked most dangerous, seeking out unmarked red shirts and looking to get the ball into the area – McTominay, on one occasion, should have been braver and tried to strike the ball on the volley.

Not long after though, Norwich looked clean through on goal but, in fairness to Shaw, he did very well to get back to recover and buy the other defenders time to return to position. A similar situation occurred moments later, as Maguire blocked a big chance from Rupp and the ball proceeded to pinball around the box. The defence looked switched off several times and Norwich could have easily taken the lead.

Admittedly, it was a fairly quiet and uninspiring first half from both sides; although it was quite end-to-end, there wasn’t lots of quality and a change or two clearly needed. It became evident that for United at least, there was one to many changes to the starting line-up and, as a result, nothing was really clicking among the players.

And that looked to be true as all four of the previous game’s front five that had been benched were warming up for the first minute of the second half. This proved to be the little jolt of motivation that was needed for those already on, as the immediate tempo was furious. United got straight into the final third and nearly scoring almost immediately, after Fred dinked a delicious ball into the box and Bruno went for an overhead kick, just not getting any real connection on the ball.

Eventually, in the 50th minute, the ball was sent into the box, dinked over the last defender by Juan Mata and Ighalo uses the outside of his foot to shepherd it in the goal – an awkward but agile finish and his fifth goal in just four starts (11 appearances total). This didn’t quite open the floodgates so to speak, but it did seem to take the slightly frustrated edge out of United’s overworked play.

A creative spark was still needed and ten minutes later, Williams, Rashford and Greenwood came on for Dalot, Lingard and Mata. However, in the 69th minute, United looked like they had got away with it, as a free-kick goes undefended and the ball looks goal-bound before Norwich’s own Ben Godfrey’s accidentally get his head in the way to clear it off the line. Fortunately for both parties, after seeing the replay, it was clear the ball was going wide.

The sigh of relief didn’t last long though, as only a few minutes later. Todd Cantwell finds himself unmarked and attempts a long-range strike, beating Romero who can’t get across his line in time. A frustrating goal but probably a deserved one; Ole readied up Pogba and Matic immediately and they essentially re-established the eleven we saw against Sheffield in the 78th minute.

Their impact was immediate, with a great ball from Pogba putting in Greenwood who, once again, found himself closing in on that right-hand side and blazed a shot just wide. Now spurred on by their equaliser, Norwich answered back almost immediately: Romero, alive to the situation, leapt out of his net to block a shot flying across the box which would have likely been buried had he not.

They continued to try and attack and United were frustratingly standoffish; Hernandez looked to have a big chance but thanks to a fantastic last minute tackle from Williams, he was denied the chance to ever get himself set up. A worrying lack of urgency from United.

Extra-time now looked a certainty, but in the 88th minutes, Fernandes pulled off yet another one of his seemingly trademark flick and Klose was forced to pulls back Ighalo on the edge of the box, earning him a straight red. Whilst it may have seemed harsh for Norwich fans, it was clearly an obstruction that denied him a clean chance through on goal – not much debate to be had.

United nearly made it game over just before the whistle blew, after a scramble in the box was snuffed out by Tim Krul, to the rescue for Norwich once again. The Canaries had certainly earned extra-time and had arguably been the better side over the 90 minutes.

Extra-time began with a swap that saw Buendia replaced by Duda, as Norwich no doubt looked to try and take the game to penalties – their aforementioned saviour being a specialist shootout keeper. United took the game straight into the final third though and only a minute in, Pogba nearly headed in a goal at the back post, but the ball was just slightly out of reach.

Moments later, Rashford introduces himself and does well to side-step the defence and test Krul from just outside the box. This was the first real moment from him in the game and with United getting ever closer, Martial is brought on in the 96th minute, hoping to win the game as he did on Wednesday.

Once again, despite having different personnel, United still looked to be overplaying and complicating things – ideally looking for another chance like that of Rashford’s but simply not taking enough chances.

It was Pogba who took the initiative, fizzing one from range as Tim Krul allowed it to bounce off him – again, the kind of chances they should be chasing at this point. Seconds later, Martial seemingly has an easy tap in at the back post, but the long ball over and pressure from the defender is enough to make him miss it entirely.

Minutes later, United nearly find the lead from a corner, as Maguire heads it down to the bottom right-hand corner and Krul pulls off another great save. Fresh from Pogba’s attempt, Bruno tries something similar and strikes from range only to be palmed away yet again by Krul – United trying anything now.

Thankfully, two minutes from the end of extra time, United finally manage to break the deadlock, after a great ball in from Pogba is softened by Ighalo and let loose near the six-yard box. Up steps the captain, Harry Maguire to pokes it home amongst a crowd. And breathe! You couldn’t but feel Norwich had been hard done by, but United kept on plugging away and made it count.

It proved to be enough to see United progress through to the semi-final, but United certainly got away with it and, for the longest time, it looked like the game would be decided by penalties. Maguire himself summed it up perfectly in the immediate post-match: “we made it hard work for ourselves. Nevertheless, an ugly win is still a win and the Reds go marching on!