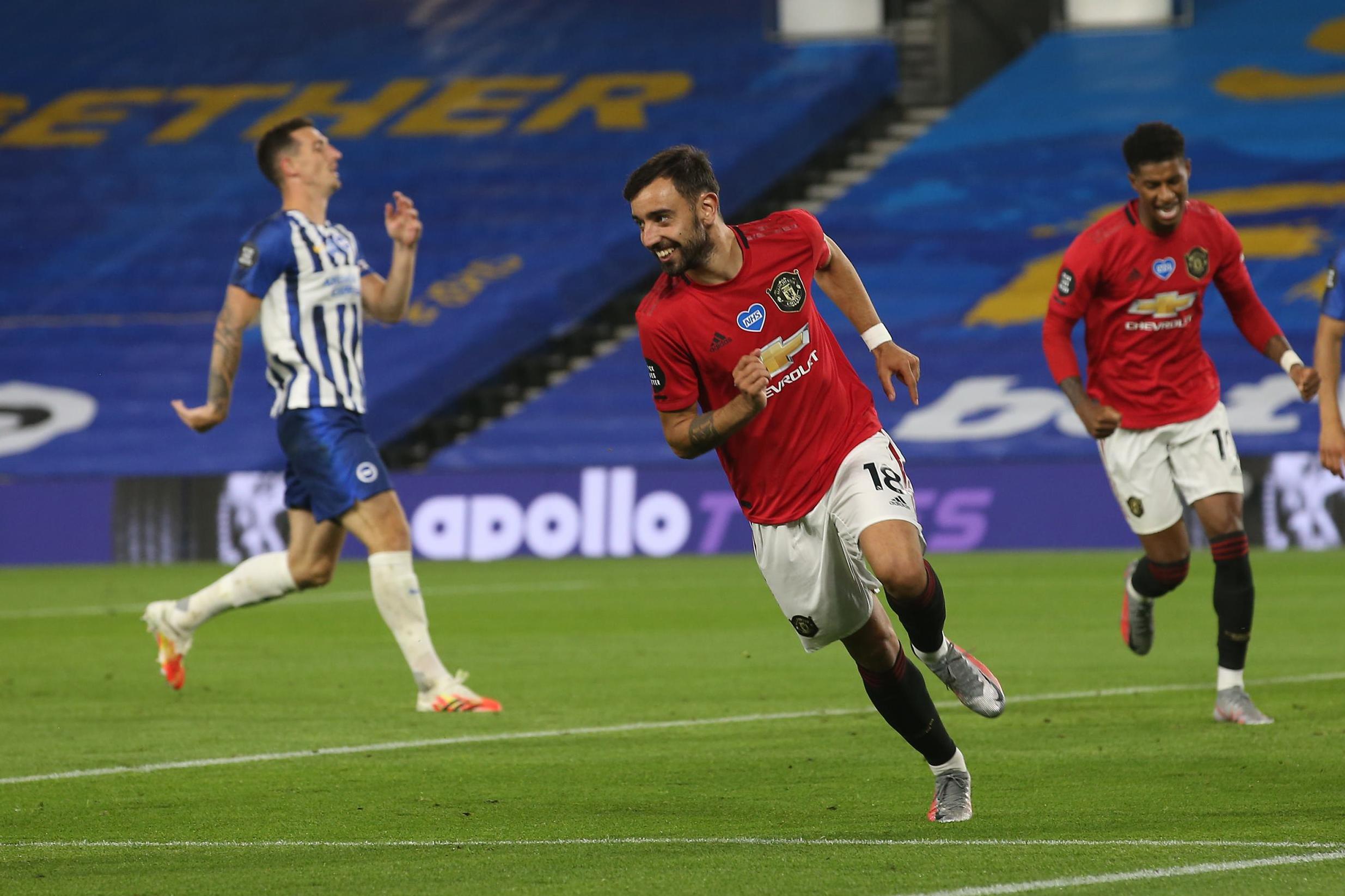 On a night where United needed three points to keep up the pressure on Chelsea and Leicester in the race for Champions League football, the reds didn’t disappoint and built on their performance last time out in the premier league, where they swept aside a good Sheffield United side.

On a cold night on the south coast, United started quickly focussing the majority of their attacks down the left-hand side with Luke Shaw overlapping ahead of Rashford at every opportunity, finding acres of space behind the Brighton back line time and time again.

However, it was down the opposite flank that brought about United’s first real chance of the game. Aaron Wan-Bissaka, who is starting look more comfortable in the final third with each passing week, took a lovely touch to get around Montoya before playing the ball into Greenwood who moved the ball on to Pogba. After a few touches to carry the ball to the edge of the box, the Frenchman laid the ball off perfectly to the incoming Fernandes who rattled the post with a side footed effort.

The warning signs were there that the two jewels in United’s crown were going to take over, but it was 18-year-old Mason Greenwood who gave the reds a deserved lead after 17 minutes. The academy graduate has often been compared to Robin Van Persie but this was straight from the Cristiano Ronaldo playbook. Receiving the ball on the run thanks to a perfectly timed ball from Wan-Bissaka, United’s number 26 entered the box with intent and two step overs later, the ball was whipped through Lewis Dunk’s legs and sent past a helpless Matt Ryan at his near post.

United looked imperious all half, playing arguably their best football of the season and it wasn’t long until they doubled their lead. Luke Shaw got in behind the Brighton defence for the umpteenth time and pulled the ball to the edge of the box where Pogba was waiting. In what could have been a replay of the earlier chance, United’s number 6 laid the ball off to Fernandes who found the back of the net thanks to a deflection off Brighton’s Alexis Mac Allister.

Brighton made a couple of changes at half time, bringing on Maupay and Trossard for Propper and Lamptey, signalling a shift to a more forward-thinking approach. Unfortunately for the hosts, this played into United’s hands perfectly and five minutes after the restart the reds scored their best goal of the season (and perhaps the best since Ferguson retired.)

Four passes were all it took to get the ball from Harry Maguire’s head to Bruno Fernandes’ right boot in a scintillating counterattack that wouldn’t have looked out of a place in 2008. Matic took Maguire’s headed clearance on the chest before pinging a ball out wide into Greenwood’s path; taking five Brighton players out of the game in the process. From there, Greenwood had the choice of the three red arrows, Martial, Rashford and Fernandes, electing for the latter who took the inch perfect ball on the volley and finished in devastating fashion. This was Manchester United at their very best. In any era.

With game all but over, Solskjaer elected to bring Pereira, Mctominay and Williams on just after the hour mark for Fernandes, Pogba and Shaw and United noticeably dipped almost instantly. Trossard, Brighton’s brightest player on the night, started to find pockets of space in between the United midfield and defence and flashed a couple of effort past both of David de Gea’s posts. De gea himself also made a couple of useful saves late on, denying Adam Connolly after the Brighton forward tried his luck from 20 yards, before also tipping wide a deflected Neil Maupay effort.

United had a few chances in the final ten minutes to add a fourth through Daniel James and Scott Mctominay but in the end had to settle for just the three goals in what was a much more convincing display than in their last visit to the Amex Stadium.

Solskjaer’s attention will now shift to Bournemouth on Saturday afternoon where he will be hoping to pour more misery on to Eddie Howe’s side who look destined for the drop.