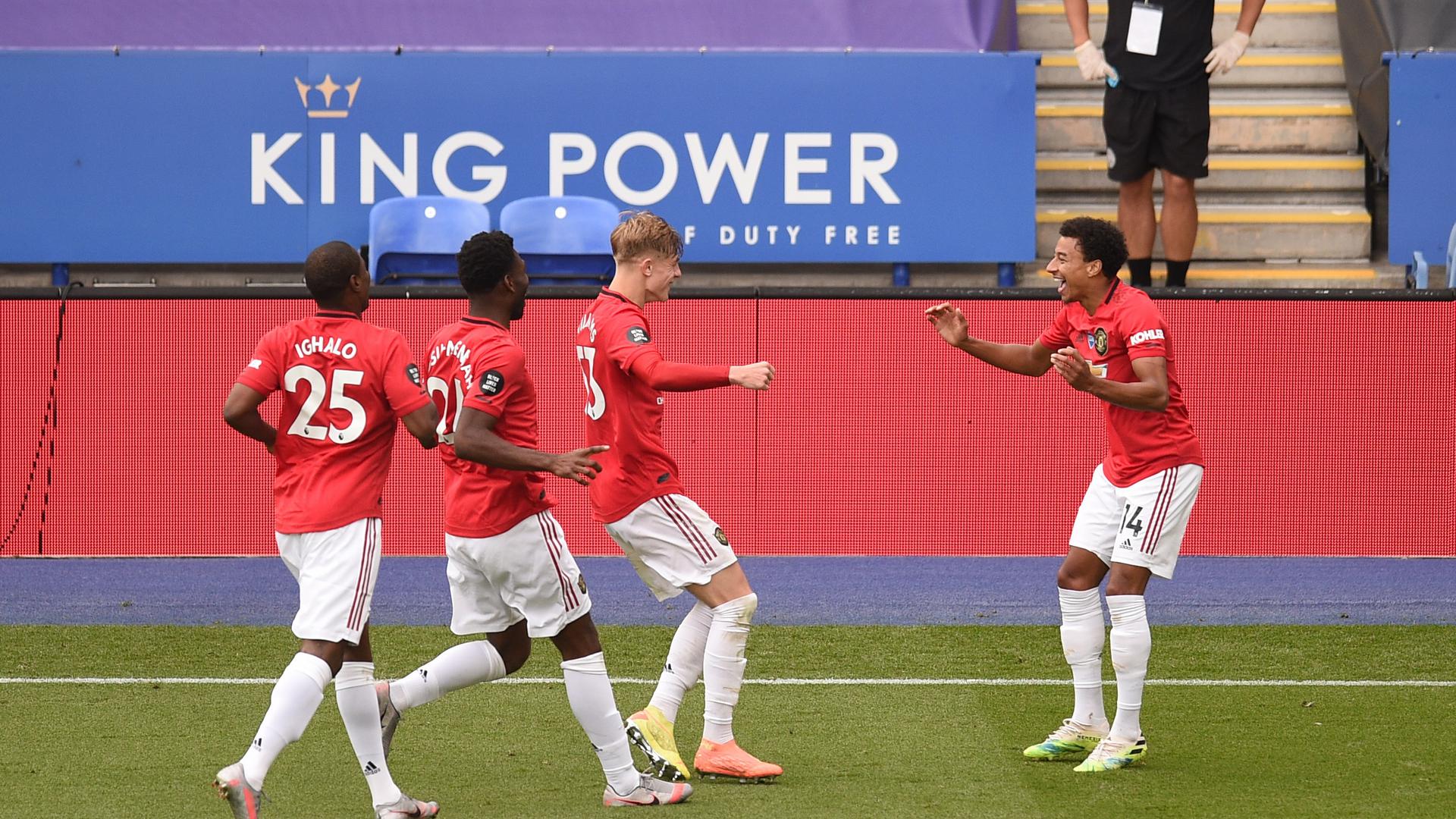 The final day of the Premier League was set to be an all-star finish by any account, with virtually every team in the European places looking not only for a win, but for results to go their way in order to guaranteed Champions/Europa League places. The same knife-edge action was going on at the other end of the table too, but for United, all eyes were on that third spot.

The Reds came into the game still unbeaten in 13 matches (8 wins) and, arguably, starting with their strongest line-up. The front six remained unchanged but the biggest having Williams come in for the injured Luke Shaw could prove to be crucial – the more attacking full-back option in a game where although a point would do, going for anything less than a win would be unacceptable.

Conversely, Brendan Rodgers himself picked a deceptively threatening and fluid 4-3-3, with Iheanacho seemingly facing off against the Lindelöf – often been outmuscled and wrong-footed this season – and even the more rapid, Vardy, looking to use his agility to fade-away from his former teammate in Maguire.

It was a narrow 1-0 win in the reverse fixture, thanks to a Rashford spot-kick, but fans would be hoping less squeaky bum-time and more of a dominant performance to give themselves breathing some breathing room. United also looked a much better outfit than last time out, with stronger selections in both defence and midfield: certainly enough quality to outfox a faltering Leicester.

The game started at a fair pace, with United getting in the opposition box just a minute into the match and Leicester doing the same just a minute or so after. Despite the gravity of the game, those early nerves seemed to be under control for now on both sides, with fewer stray passes than in recent games and plenty of movement all over the pitch.

The Reds looked the brighter of the two teams in the opening ten minutes and despite two soft-shouts for penalties at both ends, the biggest moment came with Maguire picking up an early yellow card. This decision could prove to be key with so much of the game yet to play; thankfully, Lindelöf looked to be having a better game than as of late but he would be hoping not to be left isolated.

The first chance of the game came from a lovely long ball into the box by Rashford, who found Greenwood rising in the box; the leap was fantastic but the header just a touch too lofted. Great intelligence and vision from both and hopefully a sign of things to come.

A couple of minutes after, Leicester answered back as United failed to play out from the back and Matic essentially gifted the ball to Ndidi, who thankfully skied the ball over the bar. While the confidence to try and play their way out can be applauded, the calmness you need to do so successfully was quite some ask in a game of this magnitude.

Despite some minor defensive lapses, both Williams and Wan-Bissaka were doing well to not only get forward but enjoy space and actually recycle a lot of the ball. On the contrary, this looked to be playing into the Foxes hands and as for our other defensive players, barring Lindelöf, Matic and Maguire looked to be overthinking things and were gradually allowing Leicester into the game.

On the turn of the 24th minute, Leicester nearly made them pay as a fast break saw Iheanacho find the ball and but for a scuff, could have given them the lead. Not only was the shot and defence unconvincing, but so was De Gea’s smothering of it, as he spilled the ball and Vardy almost secured the second ball. The legginess noted in recent games clearly a concern from Matic backwards.

Another issue for United was positioning, with Rashford, Bruno and Pogba all having to come far too deep (and wide) to pick up the ball. Whilst United may have started better, Leicester were quickly coming into the ascendancy now and possession was slowly shifting in their favour. It came to the point that Williams was now finding himself in the ten and the formation was non-existent.

Limbs were nearly in the air around the 30-minute mark, as Bruno slipped in behind at the back-post and slyly tapped the ball beyond Schmeichel, only for it to be called offside. Seconds after, Leicester went straight up the other end and just brushed the left upright, with De Gea once again looking less than convincing in covering his angles.

The final ten minutes felt like a significance gear shift, with the passing from both teams being fired fast and frequently. Furthermore, both showed promising patterns that simply lacked the quality final ball. Vardy’s six-yard chance was well snuffed out by a last-ditch block by Maguire, which was then quickly followed by Rashford nearly curling one top-right, only to get too far under the ball and scoop it high and wide. The game starting to look more end-to-end and both seeking a first-half goal.

United closed the half by very nearly taking the lead in quick succession, after some clever midfield play from Pogba and Fernandes saw Martial nearly bag a deflected effort. Moments later, a corner was swung in and Rashford nearly leathered the ball into the net, but Schmeichel did extremely well to rebound the stinging strike, and Marcus ultimately slipped before the third and final chance.

As the game broke for half-time, the best that could be said is that whilst the game had now been made more open, United’s attacking players were moving well and the link-ups were starting to come together. On the other hand, the Reds could be set to rue these missed chances as Leicester were still looking threatening and despite looking good going forward, defence was still a worry.

The second half started with United dispossessing Leicester early on and Martial nearly opening the scoring but for a great tackle from James Justin. Regardless, as had been the case all game, Leicester were quick to respond and soon found themselves up the other end – Lindelöf, once again, doing well to sweep up crosses. The deluge of rain now intensifying as if to set up a Hollywood ending.

United took a good five minutes or so to settle into the half but once they did, were starting to use possession well. Rodgers clearly sensed the balance shifting back our way and decided to bring on Ayoze Perez for Iheanacho to give the already troubling back-four a different challenge.

Leicester nearly took the lead a minute after as a ranged free-kick was whipped in and dinged off the top-right corner off the bar. De Gea was left watching and the defence, once again, looked switched off on a set-piece. It was a warning that didn’t hit home either, as the next passage saw Tielemans nearly score and soon the waves of attack were increasing, with Lindelöf also picking up a booking.

United did well to ride out the period and in the 68th minute, somewhat against the recent run of play, Martial was through on goal and sandwiched between Morgan and Evans, awarding the Reds a penalty. Bruno slowly stepped up and bringing back the little jump before the strike, he comfortably slotted home the penalty – a record 14th of the season. A subject of teasing all year but won well.

Leicester, knowing Champions League was at stake, instantly made a triple sub, bringing on Gray, Barnes and Dennis Praet. Not only was this a statement from Rodgers but one to be seriously wary of, as his side have scored the most goals in the last 15 minutes this season (19).

Ole also decided to make a change in the 77th minute, taking off Greenwood, who did so well in dispossessing Leicester to set Martial on his way, and bringing on Lingard – a somewhat puzzling decision given his lack of minutes and influence the season.

Unsurprisingly, Leicester’s changes did make the intended impact and Gray’s whipped cross was nearly volleyed home. Fortunately for United, the wrong man was on the end of it and Wes Morgan swung his boot in vain. A few minutes later, Gray once again threatened De Gea, blazing just past the post; Leicester once again becoming more dominant.

As the results around the country continued to come into the commentary box, that penalty looked to not only be a repeat of the reverse fixture, but to have been key in assuring a top-four finish. United were now focusing more on defence as Matic, Pogba and Williams all began to pick up yellow cards. The Reds, once again, riding out the onslaught and run down the clock.

However, that is not to say that we were parking the bus a la Jose; Ole’s men were still looking to take the game to their third and just a couple of minutes from full time, Johnny Evans picked up a straight after going studs up on the shin of the only recently introduced McTominay. The corner was taken short and the ball held on to before Fosu-Mensah and Ighalo came on to see the game out.

The action seemed to be over but, in an absolutely comical conclusion, Schmeichel needlessly decided to try and dribble past Jesse Lingard, who despite not scoring in the league since Ole’s first Premier League game against Cardiff back in 2018, won himself an easy tap in to win the game 2-0.

And that was it! United are officially back in the Champions League! Penalties proved to be a key player in our season, right up to the last day and despite it being a terribly tense affair, Solskjaer manages to sign of his first full-time season with a clean sheet.

Match report: Leicester 0 vs 2 UnitedWhile Martial might have won the penalty and Bruno scored it, man of the match has to go to Lindelöf, who managed to keep an otherwise defensive off-day from escalating – a fantastic comeback performance after a few difficult weeks. It may not have been the most impressive performance but it’s no doubt been an incredible season. Drink it in, Reds!