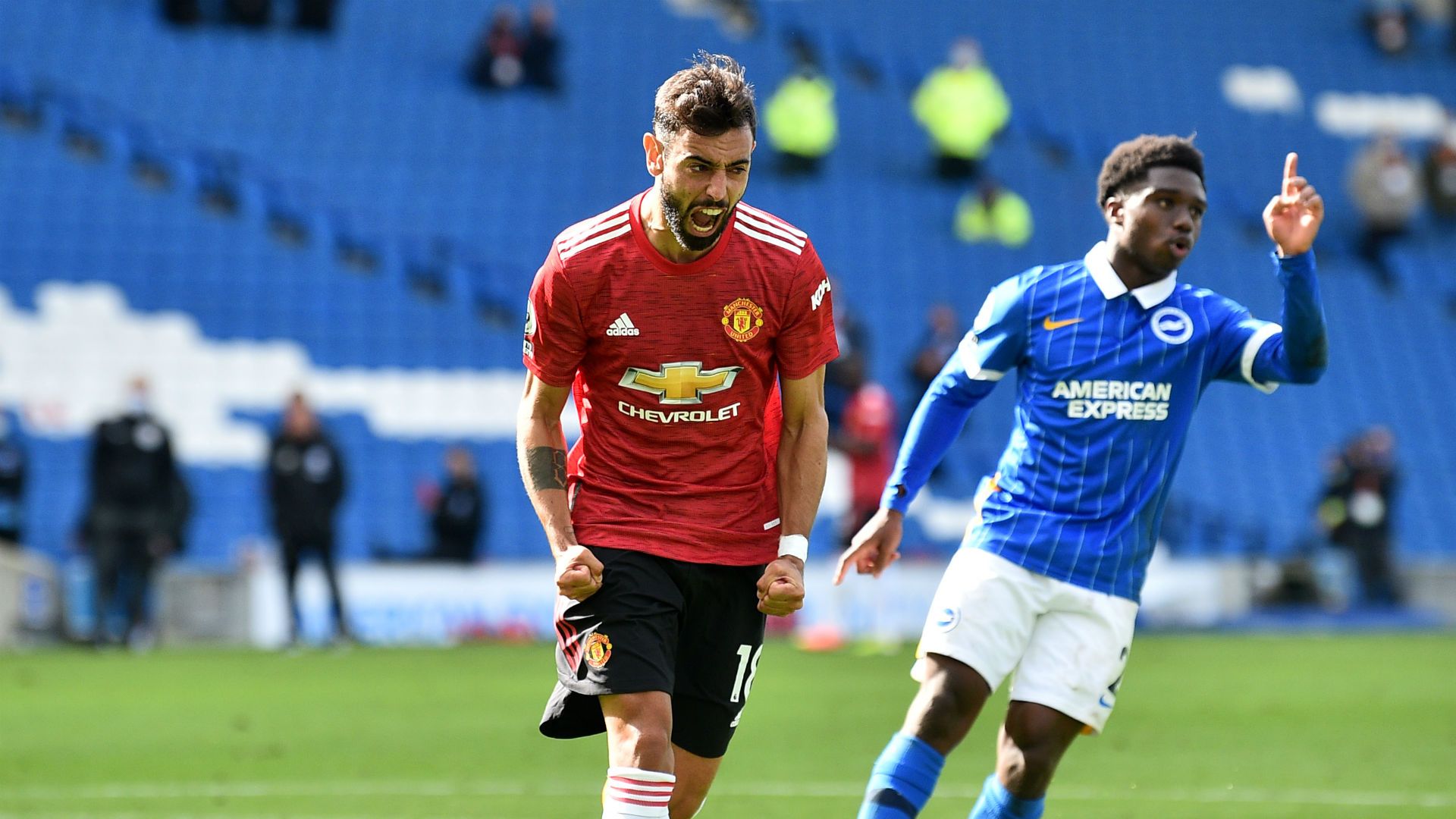 United’s opening fixture of the 20/21 Premier League season was disappointing to say the least. With concerns surrounding fitness, team selection and overall match sharpness before the first ball had even been kicked, the result may not have been a surprise to many. Regardless, every Red will be singing off the same hymn sheet this week: the boys must do better and respond in the right way.

The line-up ahead of the trip to Brighton, on the other hand, did catch a few off-guard, as despite Solskjaer’s talking up off Eric Bailly earlier in the week, Lindelöf remained at centre-half and scorer in the EFL Cup, Donny van de Beek, was once again named on the bench.

Some positives though: the return of first team starters, Nemanja Matic and Aaron Wan-Bissaka, who looked to sure things up defensively after last week’s frailties. United’s last visit to the Amex was one of the better performances of last season – a 3-0 win where Bruno pulled all the strings. Ole would certainly have been hoping for his men to bounce back and get back to similar levels.

In the opening minutes, United looked to have started the game a lot more confident and comfortable than either of the first two games this season. As well as sharper, more competent passing (barring a slightly faltering Bruno) there was plenty of movement, with the front four at least showing the intent to create those link-ups.

Another positive was the seemingly calmer the temperament in defence – Brighton look more open than ever under Potter and offered plenty of threat on the counter in the early moments. The first chance of the game came just nine minutes in, when Leandro Trossard hit the left upright from distance, but De Gea looked to have it covered should it have been an inch or two more accurate.

This chance followed a spell of Brighton possession, looking to catch United on the break and isolate either one of Maguire and Lindelöf, who were both less than convincing against Crystal Palace. Thankfully, despite consistent pressure, both started the game well, no doubt helped by the return of Nemanja Matic in front of the back-line.

United got there first real chance of the game after around 18 minutes, when some confident stepping out from Matic allowed him to play Bruno in on the left flank. Whilst the Portuguese midfielder was clearly looking to pick out someone in the box, his cross almost curled inside the post. Sadly, unlike Brighton, United struggled to build any momentum in the immediate follow on.

Just a minute or two later, the Gulls found their way back up the pitch and Trossard managed to hit the other post. Once again, De Gea had his angles sorted but concerns were clearly growing.

A quarter of the way through the match and Brighton certainly looked the more likely to score of the two, with a set-piece seeing Adam Webster strike the bar – the third time occasion the woodwork had been hit in less than 30 minutes.

However, United’s attacking players can always pose a threat even against the run of play and they looked to have taken the lead in the 33rd minute, when some wonderful hold-up play and footwork from Martial allowed him to play in Rashford. The number ten quickly squared the ball to Greenwood, who poked it away efficiently – unfortunately, the initial ball to Rashford was slightly too late and his offside ruled out the goal.

A less than optimal Bruno Fernandes’ day went from bad to worse in the 38th minute, when a lack of concentration saw him follow Tariq Lamptey into the box and despite pulling out from the challenge, still got tangled in the young right-back’s legs. De Gea no doubt frustrated by being tested with two (or rather three) spot-kicks in two games, as Neil Maupay cheekily stroking his Panenka penalty under the crossbar. 1-0 Brighton.

United knew they had to answer back quickly before the game got away from them. Immense frustration was quickly turned into motivation as a slaloming solo run from Luke Shaw saw him win a free-kick two minutes before half-time.

Bruno, clearly looking to make amends, whipped a fast-paced ball toward the back stick, which after being kept in by Matic, was inadvertently poked in by Lewis Dunk, thanks to Maguire’s leg coming in from behind. Own goal or not, Brighton’s opener was quickly cancelled out, but the nerves still very much there.

Despite looking much more settled in the open five than they did against the Eagles, United’s composure looked to have wavered and although a penultimate strike from Matic didn’t really test Matt Ryan at the end of the first half, United were already looking desperate for every chance. A lot to improve on in the second half.

The second 45 couldn’t have started worse as, once again, another United midfielder decided to follow his man into the box, despite defenders still being approximate enough to take over. Pogba stuck with Connolly and whilst there didn’t look to be contact, it was an unnecessary risk to take yet again.

Thankfully, once VAR and Christopher Kavanaugh had time to review the decision, the initial penalty decision was overturned. Regardless, erratic nature of United’s game thus far still looked to wreaking havoc despite the breather.

The Reds thought they had given themselves an injection of positivity, when a simple ball across the box had Rashford thinking he had made the game 2-1, but is was a clear offside and yet another point of frustration. United once again trying to force themselves into the game.

Rashford didn’t get disheartened though and in the 54th minute, a lovely long ball in behind from Bruno saw Rashford driving into the box. United’s number ten looked to have almost overdone it at one point, having to cut back and change direction several times, but thankfully he sold enough defenders to see his deflected strike find it’s way into the net. 2-1 United.

The relief didn’t last for long, however, as Brighton looked to answer back and reassert the control that they had been enjoying for most of the game. Working a patient but dynamic move from side to side, the ball found it’s way to Solly March, who was also denied by the woodwork—four times now—and on this occasion, De Gea stood no chance. United continuing to ride their luck.

United clearly needed a shape change and after being one a few passengers throughout the game (aside from the penalty drama), Paul Pogba was substituted for Fred in the 65th minute, with Ole obviously looking to bolster the team’s defensive efforts.

Brighton didn’t change their approach one bit though. Now evidently playing on United’s jitters at the back and regarding another penalty shoot, in particular, more patient play allowed Maupay to pick up the ball and strafe in and out of the United defenders and get a shot off completely unchallenged. Both teams now confident in their attacking plans: one build-up based, the other counter-attacking.

The game was now supremely end to end and despite United being in the lead, Brighton were still dominating the majority of play. With less than a quarter of an hour to go, Trossard completed an incredible hattrick of woodwork strikes – a total of five such instances for the team total. United well and truly against the ropes with nearly every wave of attack, with Maupay and Solly March both only marginally missing big chances.

Solskjaer looked to be solely focusing on running down the clock for the last five to ten minutes, with a virtually invisible Anthony Martial being replaced by Donny van de Beek on the turn of the 90. With just three minutes remaining of extra time, David de Gea blocked a last gasp effort off the line from short range. Admittedly, the strike was right at him, but the Spaniard did well to close his legs.

It was all for not though, as literally moments from the final whistle, Jahanbakhsh whipped an almost slow-motion ball to the back post and Solly March, who had been narrowly denied on several occasions, finally headed one in at the back post.

All the drama looked to have been exhausted in what had already been a hugely stressful game, but there was one last unbelievable twist in the tale. The game looked to be over – in fact, the referee had blown actually blow for full-time – but after Maguire had a last-gasp header cleared off the line by the goalscorer, March, VAR reared its head once again.

With players at their wits end on both sides, Christopher Kavanaugh was prompted to consult the pitch-side screen and upon second glance, it was clear that the ball had struck Maupay’s arm and, according to the current ruling, United were rightly given the penalty. Madness.

Predictably – despite having been relatively poor all game – United’s ever-reliable spot kick taker, Bruno Fernandes, stroked the ball into the top right-hand corner and the Reds somehow managed to seal their fist win of season after 100 minutes.

The match was nightmarish from start to finish and was largely dominated by drama inside the box. It would be wrong to say that United deserved the win, when Brighton were clearly the better side and (despite not scoring) had a clear man of the match in Trossard. The Reds will feel as though the penalty made up for the similar decision against them in the last game, but there were alarm bells from start to finish.

However, this early in the campaign, it’s all about the result and if anything can be said about this game, it’s that it was immensely entertaining – certainly for the neutral. On a more serious note and taking nothing away from an impressive Brighton side, United look to have plenty to work on and cannot rely on riding their luck like this all season.