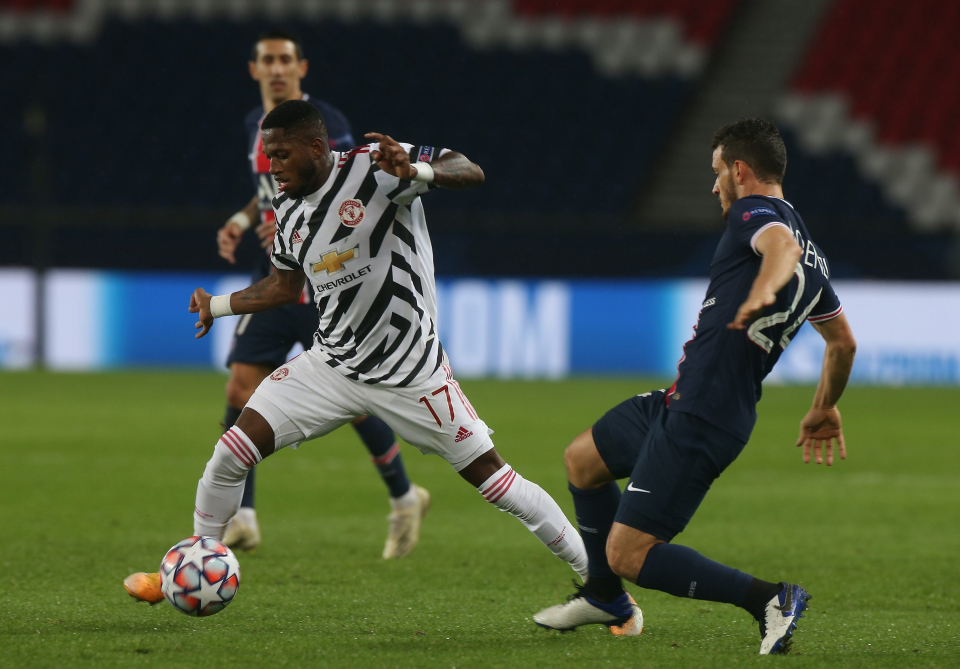 It was déjà vu for Manchester United in Paris last night, with Marcus Rashford grabbing another late winner, and penalty decisions dominating much of the post-match talk.

Although the result mirrored celebrations to that iconic victory in March 2019, the performance was very much different.

United’s 39% possession mark may symbolise a ‘smash and grab’ display on the home turf of last season’s Champions League finalists, to which the Red Devils walked out as huge 5/1 betting underdogs, but in reality, they put on a dominating display.

This was not domination in the sense of non-stop attack and penetration, but instead, controlling all areas of the park and limiting PSG’s £480m attack to a sniff, whose eventual goal only came courtesy of a freak own goal.

Each and every one of United’s players put in a shift, with notable recognition going to the backline, but much of the team’s resilient play stemmed from one man in the middle – Fred.

The Brazilian made his third start of the season last night, accompanying Scott McTominay in a double pivot, just the like the duo did last year. Ole Gunnar Solskjaer has often utilised the two midfielders together in games of this magnitude, opting for a blanket of security in-front of the defence, as opposed to a sole anchor.

Some eyebrows were raised when the names of Paul Pogba and Nemanja Matic were left on the bench, but the manager adopted a specific game-plan, and chose his starting XI based on those best fitting to deliver exactly that.

Fred sat deep and looked to cluster the space in United’s half, rushing towards players to press and restrict their time on the ball. Neymar, granted his usual license of drifting inside, found no space in the middle, with his attacking output being virtually nonexistent last night.

The three United CBs continued to drop deep and eliminate that space for Kylian Mbappe to run-into, forcing him out wide and placing him in a 1v1 battle with Aaron Wan-Bissaka – a contest the Frenchman looked no match for.

United’s defence was allowed to drop deep without the worry of leaving space in-front though, due to Fred’s tenacity. His heatmap, via WhoScored, paints a messy picture to the eye, but one that highlights his desire to cover near enough every blade of grass on the field.

Closing down the opposition, no United player managed more interceptions than Fred (3), with only Wan-Bissaka bettering him in the tackling department (6 compared to 5). His tenacious pressing, but also intelligent positioning, prevented PSG’s trio from clicking and getting into motion – an attacking line that has reigned terror over some of Europe’s best defensive set-ups.

It was another win in France for the Red Devils, with the Parisians being left frustrated yet again. Their frustration cannot be channeled at referees or VAR this time though, but at the better team turning up with a resilient gameplay.